Things that go bump in the night

It has been months since we’ve undertaken an overnight passage but we might be commencing one tomorrow. The top of Trinidad lies approximately 80 miles south of lower edge of Grenada and 105 miles from Carriacou. We had originally planned on sailing to St. George’s tomorrow, staging there for the day and then setting sail for Trinidad on Tuesday. After consulting the charts though, we determined that departing from here gives us a 10 or more degree better angle on the wind. So, from here we will leave and at a 5 knot average, the passage from anchor up to anchor down should take us about 24 hours. Of course, all this hinges on us receiving confirmation that Rebecca can get on the October 8th STCW course. If we don’t get that confirmation, we’ll be putting the trip on hold until November when the next session begins.

Night sailing is one of those things that some people get freaked out about. The truth is though that, south of the Bahamas, there’s just no avoiding it. The distances between several of the islands are great enough that it’s just not possible to sail between them during a single day.

The greatest risk to night sailing seems to be bumping into some unseen, partially-submerged object in the sea. This is a very real threat in some areas, as attested to by the yacht which recently sunk in the Indian Ocean. With the watertight crash bulkheads on each of our bows, our boat might fair a bit better than the unfortunate one in that story but I’m not eager to test that theory. Like many things sailing related, we just need to have some faith and trust that the odds of not hitting something are greatly in our favor. If sailors didn’t have that kind of faith, they would probably seldom leave the shore! 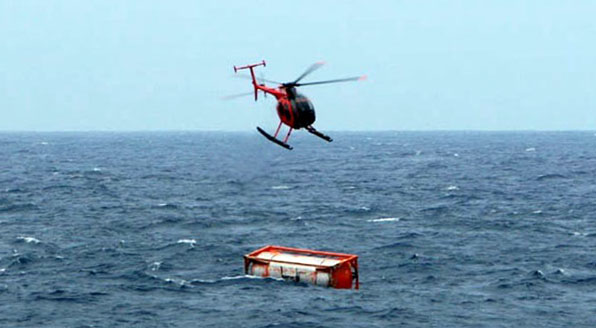 Partially submerged container which has fallen off a ship.
Running into something like this could seriously ruin your day (or night).

Carriacou to Union Island to Tobago Cays to Bequia

A new addition to your library?