Much of yesterday was spent confined to our boat, “enjoying” the sometimes not-so-gentle rocking induced by the building waves. Our current anchorage is reasonably protected from all directions except north so I’m sure you can all guess which direction the wind is coming from then, right? We had a number of projects to work on and thus kept ourselves busy.

Several days ago we received an email from a gentleman who told us that he would be flying into this area to look at a PDQ for sale in the Miami area. He suggested that if we were in Melbourne, where his friends live, at the time that he arrived, that perhaps we could all get together. In truth, I had forgotten about this a bit but early in the morning yesterday, we received an email reminding us. I quickly gave Jordi a call and we made plans to meet up for drinks/dinner later in the day.

There is a little dock down a nearby channel where we had landed Knot Tide Down’s dinghy when we went shopping and although there are signs all around that say “No mooring of boats,” we knew they couldn’t be talking to us. After all, a dinghy isn’t a real boat is it? Just to be sure, we locked it up when we got there, making sure not to make the same mistake that we did the other day. When Bill locked his dinghy up to one of the docks pilings, he secured the cable above a plank so that it wouldn’t slide down into the water. What he didn’t see was that the bolts holding that plank had rusted completely through and so the cable lock was able to slide all the way down into the water and cinch itself tightly around the oyster-encrusted piling. Groan! Well, I’m pretty sure Bill was a bit warm anyway so he didn’t mind getting in that chilly water too much. Needless to say, we learned from that mistake!

At 5:00 we were greeted on the dock by Jordi and his friends Rob and Shelly. Jordi told us that “we had inspired him and his wife” and they listed their house for sale and began boat shopping. Much like us, their house sold in weeks instead of months and they ended up quasi-homeless too. Strange how things happen, isn’t it. They took us to a cool little Key-West-style place called Goombay’s that had excellent food. Good choice Rob. We even struck up a conversation at the restaurant with one of the owners who has, on several occasions, sailed his boat to the Bahamas. Dinner was spent, of course, talking about boats and cruising and we were happy to share whatever bits of info that we have gathered along the way. Thanks again for treating us to dinner, Jordi and thanks for the tips on the area, Rob. We had a great evening and enjoyed our time away from the rocky boat. 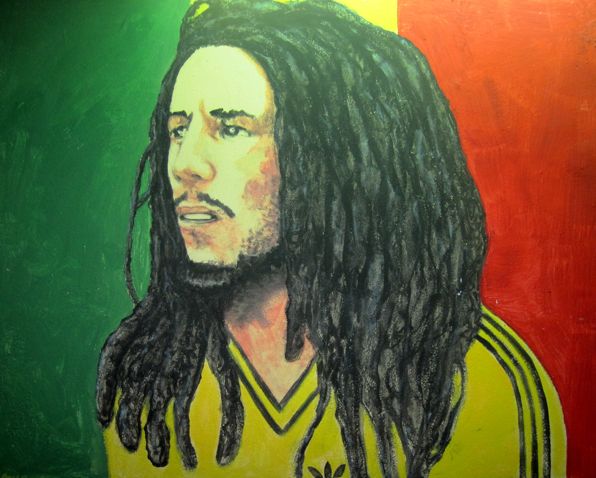 We definitely recommend this place! 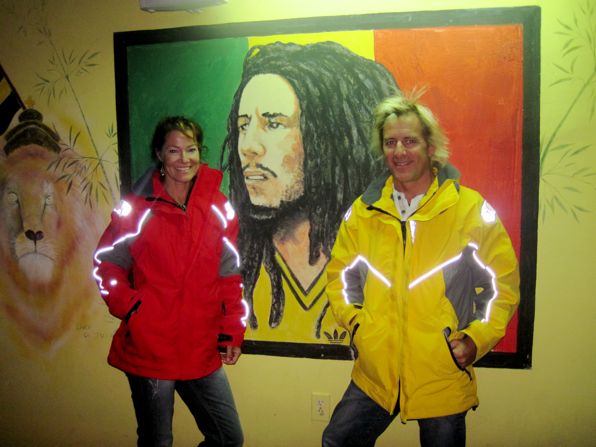 The reflective patches on our jackets are NOT good for flash photos. 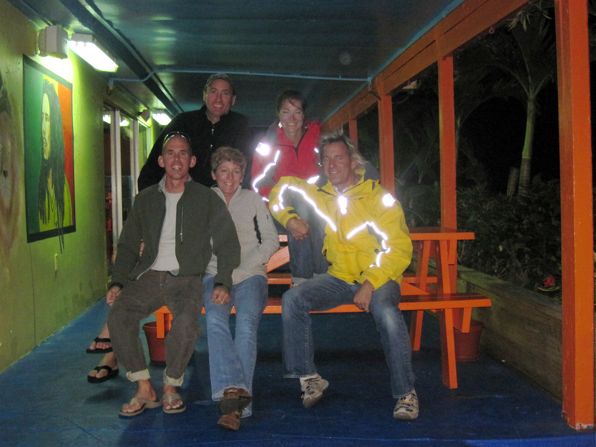 Does anyone remember how to make the camera’s self-timer work?

A great group to finish off a great season!

An escape from the snow

Safe, or am I looking through rose colored glasses?