Here is the post that many of you have been waiting for, the one that describes the repair to our rudder’s stuffing box. To begin, the video below shows the problem.

Ignore the small electrical terminal visible at times in the bottom left of the video. It has nothing to do with this and was just sitting there, having fallen down from above.

The outer sleeve that is in contact with the hull is not supposed to be rotating! While sailing, water would make its way into the boat through the space between the hull and the sleeve. 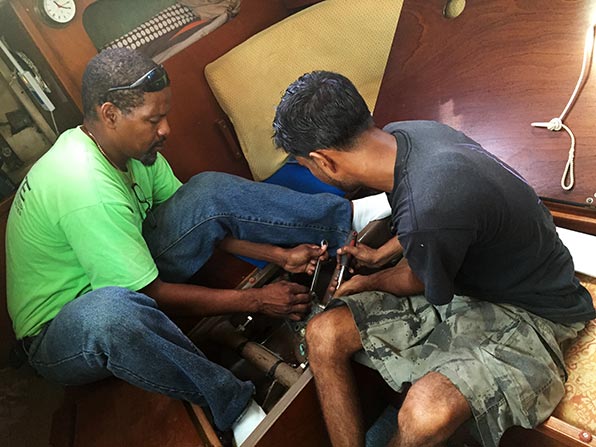 The first thing to be done is to remove the quadrant, etc. from the rudder post. Here you can see Curtis and Afzal from Dynamite Marine getting to work. 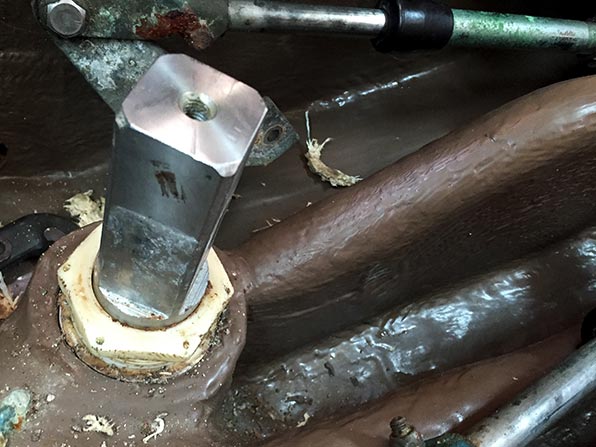 With the cables and quadrant removed, the boys attempted to remove the entire sleeve from the boat using a large puller. Unfortunately, the nylon nut was damaged in the process, requiring a new one to be fabricated. 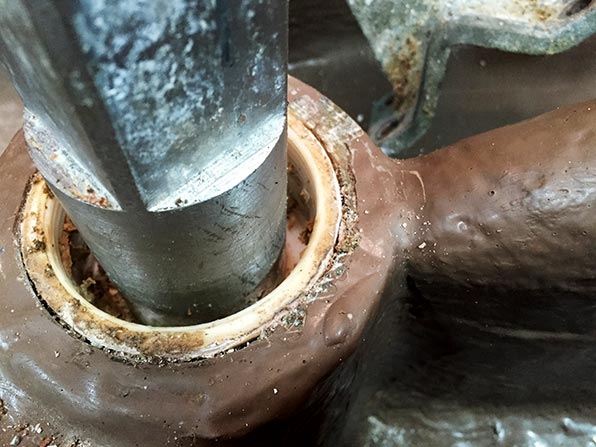 Without removing the sleeve from the boat, a long shot without dropping the rudder, we moved on to Plan B. Here you can see the packing material removed from the stuffing box. According to the boys, it was not installed well. Instead of several complete rings of packing material, one on top of the other, there were various smaller pieces making up the layers. This is not how it should be. 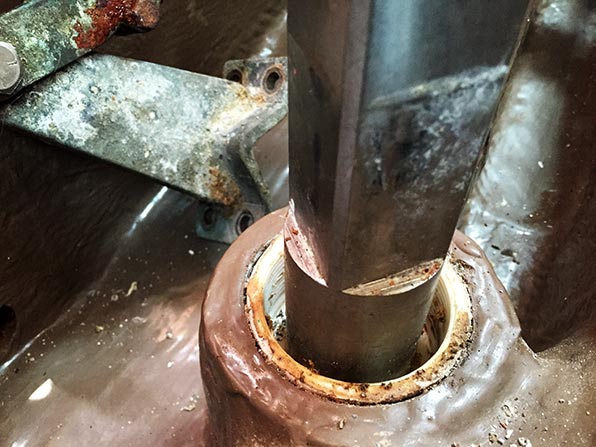 Another view of the same stage. 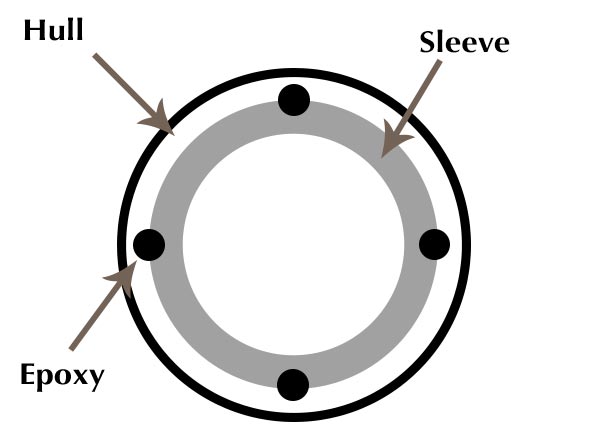 This diagram that I just made up illustrates what was done to stop the rotation. Four holes were drilled, each half into the hull and half into the sleeve. We were happy to see that the residue from the holes was completely dry. After cleaning away all of the dust, the holes were filled with epoxy, first thinned to fill any gaps, and then following that, thickened for strength. The epoxy was left to set overnight. The following day, with no other steps taken, the outer sleeve remained fixed when the rudder was rotated, exactly as planned. 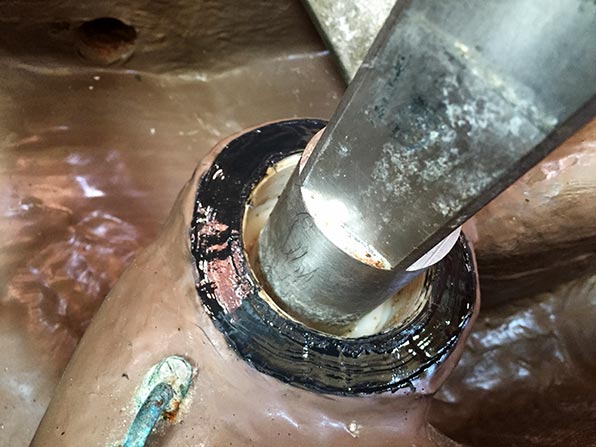 Following that, a channel was cut around the circumference of the sleeve approximately 10mm deep. After cleaning, the channel was coated with a thin layer of epoxy and then filled with 5200 (virtually permanent adhesive). This was then left to sit for an entire week for it to fully cure. 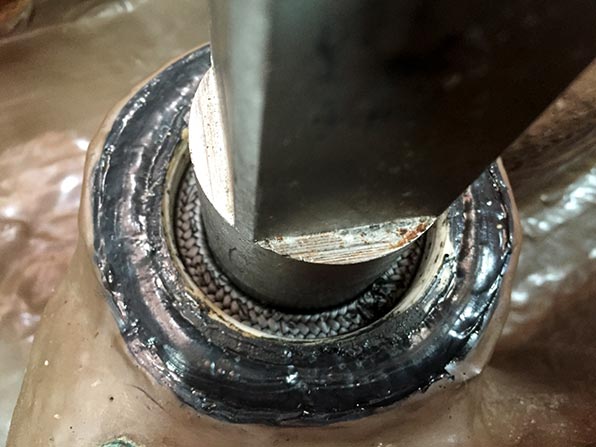 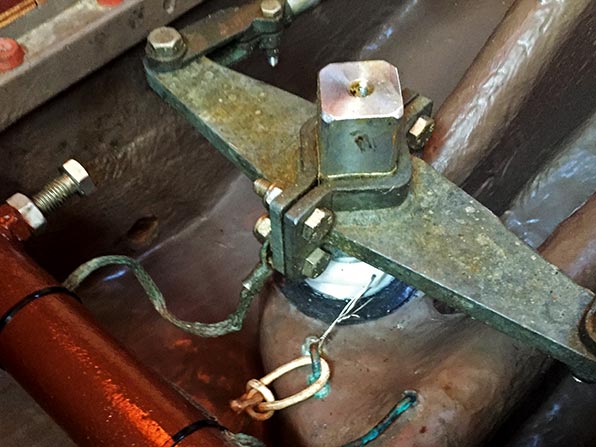 And here you can see the entire thing reassembled. Several nuts and bolts were replaced, and the entire assembly was cleaned and coated with lubricant and anti-corrosion material. Stainless steel seizing wire was reinstalled to prevent the nut from loosening (note that the wire was missing in the above video). The brown pipe which acts as a stop for the quadrant was also cleaned and repainted. 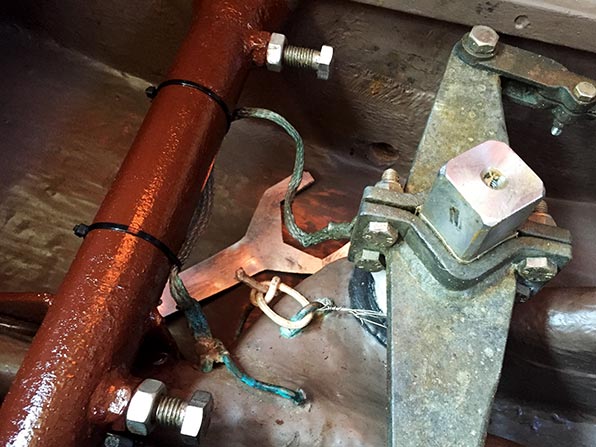 This last image shows the wrench (spanner) that the Dynamite guys fabricated to more easily adjust the packing nut. It is tied there with a short piece of line so that it is always available.

I am happy to say that since the repair, not a single drop of water has made its way into the boat from this area, exactly as it should be!

Below is the ★★★★★ review I submitted to Active Captain for Dynamite Marine, the guys who did all of our repairs in Trinidad.

“Although not our first trip to Trinidad, this was our first trip to the island to have boat work done. Recommended by Peake’s Yacht Services, I contacted Dynamite before traveling to see if they could help with our issues. Graham, who answered my messages, said come on down.
When we pulled into Peake’s travel lift bay, Graham from Dynamite was there to greet us. Before we even hauled he came on board, and I discussed the main issue that I needed to have addressed (our rudder’s stuffing box had separated from the boat), as well as a number of other jobs that we wanted to have worked on. Over the course of the next week to ten days, the boys from Dynamite looked after everything that I threw at them.
For much of our stay in Trinidad, we were not living aboard. When we arrived to the yard each morning though, the boys were often already on site, working away.
When launch day came and it was time to splash, we had four of the guys from Dynamite on hand to make sure that all of the jobs that they completed were done properly, and that we were good to go. Even after we splashed, when I found that I had new, unrelated issues that I needed help with, they made themselves available. That included just this morning when Graham came on board and crawled into a locker to deal with a plumbing issue that I was having. This, he did without charge!
The guys from Dynamite get our recommendation, without question.”

Off to a great start