Fortunately for mariners, these days most well-traveled entrance channels are marked with red and green lateral buoys to help keep boats from running onto the shallows. Although it does vary according to which part of the world you’re operating in*, we know that here in Grenada, when following a channel into a port, we keep the red markers on our starboard side (red right returning) and the green ones on our port side.

If the reefs and shallow water near the Hog Island entrance channel weren’t enough to make coming into the bay interesting for those new to the area, there is a somewhat special buoy alongside the deep water which can add to the excitement. When following the deep water channel towards Hog Island, with red markers on the Starboard (right) hand side, just as you come abeam of some obviously shallow water where waves are frequently breaking over the reef, you’ll see a buoy which appears to be predominantly red on your Port side. Oh oh! Are you in the wrong place? Not necessarily.

This red-green-red marker, known as a bifurcation buoy, actually signals a split in the channel. In this case, it indicates where boats heading towards Mt. Hartman Bay can turn off to follow the safe water to that anchorage instead of into Hog Island. Because the channel leading to Mt. Hartman Bay is considered to be the primary channel, the buoy is colored red-green-red and those wishing to go that way should keep that mark on their starboard side. If instead you wish to continue on into the Hog Island anchorage, you should treat the mark as being a green lateral buoy, keeping it on the port side. Confused? I can see why. If one was to study the charts prior to arriving though, as of course you would (right?), you wouldn’t be quite as surprised to see this less-common mark. Of course, the waves, wind, weather and any growth on the buoy can make deciphering these marks a bit tricky but again, prior planning will help. 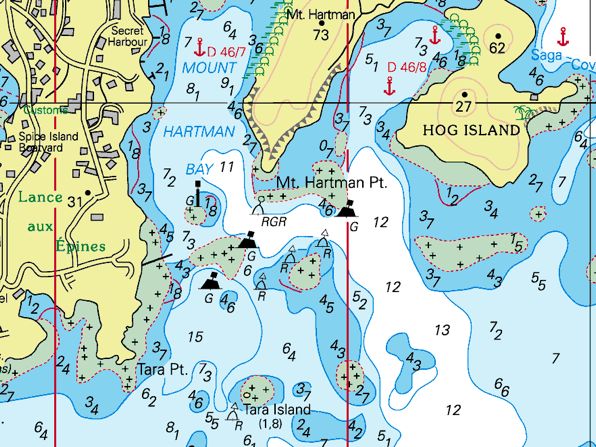 Even though this chart shows a RGR marker in the center between the two bays, it does not even begin to accurately represent the current placement of the buoys! 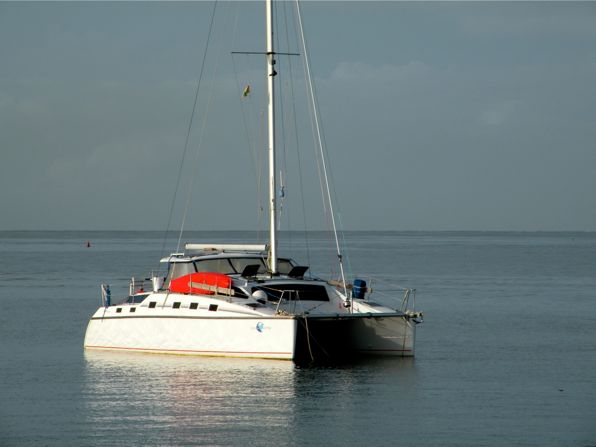 Can you tell if the mark in the distance is a red lateral buoy or the RGR bifurcation buoy? Even after zooming in on the image, we couldn’t tell.

*“2 regions exist around the world; notably the IALA region A and the IALA region B. Region B covers the whole of the Americas, Japan, South Korea and the Philippines, while the rest of the world belongs to the region A.” Source

Why not shake things up a bit?

No guarantees of arriving on time

Knot of the Day

The Abbott and Costello of fishing