More Yachtmaster prep – on the water

With the land-based theory portion of the Yachtmaster qualification now behind us, I have now set my sights on the on-the-water portion of the exam. To begin to prepare for this, I spent a portion of the last two days out with Alex of Bluewater Sailing on his Beneteau 46 Chao Lay.

After taking the bus to St. George’s on Tuesday morning, I met up with Alex and two other students, Brendan and Jeremy, at the Grenada Yacht Club. Not dismayed by the short downpour which soaked all of us through, we were soon out on the water, practicing Man Overboard (MOB) recovery under power. Basic sailing around racing marks followed, tacking upwind and jibing downwind, with each of the “students” rotating through the various positions of helmsman, winch grinder and mainsheet tender.

With those basics behind us, we were soon under sail toward the south end of the island. Here is where day one became interesting. Alex asked me that if he gave me a set of coordinates, could I sail the boat there? I of course, said yes (what else could I say) and set out to make a plan to do so. Did I mention there is no chartplotter at the helm? Nope, the only GPS chartplotter is down below. To sail to said location, I needed to plot a fix using bearings on charted features (I chose two lights and the 12 meter depth contour). The point he chose was right off Point Salines, the south-western tip of the island. Working together with Jeremy and Brendan, we were actually able to get within 0.1 – 0.2 of a mile to the spot. Not bad I think.

Our next task was to plot a safe course and sail into True Blue Bay where we planned to anchor for lunch. This time it was Jeremy’s turn to do the chartwork and we made it in there without issue. It might be worth noting at this point that the entire southern coast of Grenada is strewn with dangerous reefs. Local knowledge is king here with good charts a close second. While Alex may have had both, we had to rely upon the latter.

After lunch was through, it got even more stressful when Alex asked me to plot a course to sail into Mt. Hartman Bay. Mt. Hartman is the bay which lies just west of Hog Island and although we have been there 50 or more times by dinghy, we have yet to go through the main channels with a big boat, only our dinghy. You may recall the photo I posted of the sailboat aground the other day. Although this took place just outside of Hog Island and not Mt. Hartman, it is all still part of the same reef system.

Obviously the channel is navigable because there are dozens of boats in the bay. I suspect the vast majority of them had access to a chartplotter or GPS bearings though, a luxury Alex would not allow us. The other issue is that the lateral buoys marking channels around here are all privately maintained and are rumored to frequently be off station. Although we could use them to help confirm our path, we couldn’t afford to rely upon them. Charts were consulted, bearings were plotted and jobs were assigned. With Alex remaining much more reserved and quiet than I would have been in similar circumstances, we sailed (not motored) his boat through the reefs, into the bay. No keel-crunching-on-reef sounds were heard!

Alex had told us that he had a favorite anchor spot just off the docks and continuing our practice, we proceeded to maneuver between two boats, anchoring under sail. After dropping the hook, we hadn’t even drifted back fully when a woman on the boat next to us climbed out yelling “too close, too close.” Groan. I was on the bow at the time and told her relax and let the boat settle back before freaking out like that. As it turns out, we were not too close and she was just being annoying.

It was a full day of work and we all had a great time working through the exercises, challenging though they may be. After meeting up with Rebecca and getting cleaned up, we all met back on board Chao Lay where they shared with us a great dinner. An excellent end to the day. Details on day 2 to follow. 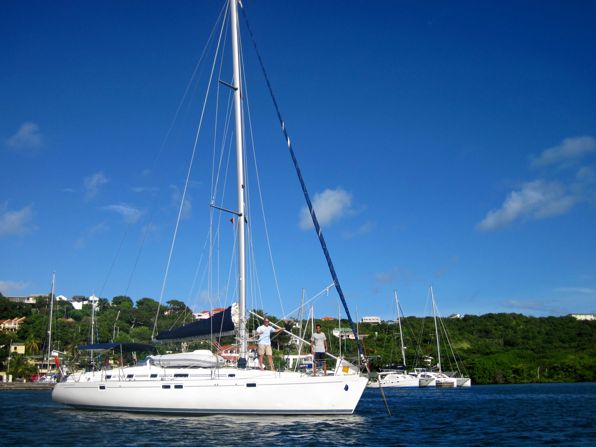 The mountains have been calling to us

How will you spend your 72nd birthday?