Yachtmaster prep – Day 2 on the water with Bluewater Sailing

Wednesday was my second day on the water with Bluewater Sailing and we continued with some more excellent training. At about 8:30 in the morning, Rebecca gave me a ride over to Mt. Hartman Bay to meet up with Chao Lay and immediately upon stepping on board, I was given control of the helm. The first bit of practice, after raising anchor, was docking. Although we’ve had plenty of practice docking ZTC, I have infinitely less experience docking a monohull. As it turned out, Chao Lay is extremely responsive and I had little trouble bringing her along side the docks safely, or springing her off into the wind.

Practice session number two once again involved collecting MOBs (Man Overboard) only instead of using the engines as we did on day 1, we worked this time to retrieve them while using only the sails to maneuver. This is a skill which I have had very little practice on. To be honest, the only time we ever did any work on this was back when we took our sailing course 2+ years ago and at the time, only Rebecca was able to successfully retrieve the MOB. Good for me but not so good for her! She should be happy to know that I faired infinitely better on Wednesday, successfully retrieving the MOB each time using the “Quick Stop” method, including the surprise one they tossed out when we were out amongst the reefs.

A demonstration of the Quick Stop MOB recovery method.

Once everyone on board had had a few cracks at MOB retrieval, we sailed out of the bay to practice tacking and jibing around and between the reefs. Fortunately while doing so, the sun was nice and high in the sky, giving us great visibility. As we did the previous day, after every few tacks, we would switch roles on the boat, giving each crew member a chance at the helm.

When it came time for lunch, I suggested that we move over to Hog Island and raft up to ZTC. Alex thought that was a great idea so after radioing Rebecca to let us know our plans, we dropped our sails and made our way through the channel. Although I’ve been in and out of there a few times, this is the first time that I’ve been at the helm without the benefit of a chartplotter. Seeing that boat end up on the reef the other day didn’t make it any better either. Good visibility combined with the bit of experience that I have with the channel paid off though and we made it in without issue. Our raft up also went without a problem, sliding Chao Lay gently up against ZTC, bringing my sailing that day to an end. 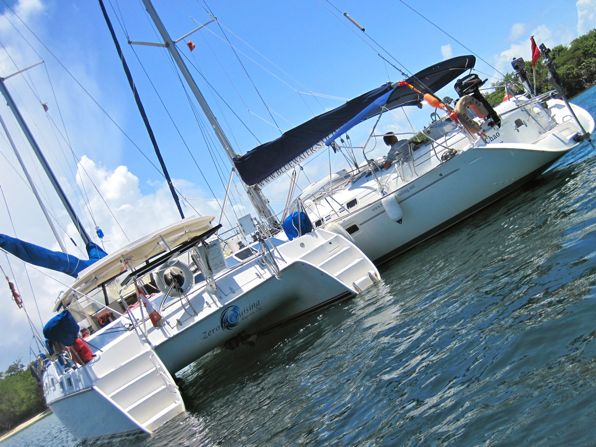 ZTC and Chao Lay rafted up just off the beach in Hog Island.

After lunch Alex and the other guys on Chao Lay cast off to make their way back to St. George’s. Although I would have liked to sail back with them, getting back to Hog Island from St. George’s would have been a bit of a hassle so I stayed put. All in all the two days I’ve spent on the water with Bluewater Sailing has been extremely productive. Alex has continued to challenge me with skills that I know will be tested in the on-the-water Yachtmaster exam. I am looking forward to having some additional time with Alex prior to the test later this month.

Shopping for a new tender