I once wrote a post entitled “How do you know that it’s full?” It talked about the weight of a propane tank when it is filled to capacity, good info to have when you’re paying for a full tank but not sure that you’re actually receiving it. Read that post… been there — done that! In hindsight, it seems that perhaps I should have used my own info yesterday to determine if our tanks were near empty!

Rebecca and I had become aware that the primary 20 lb. propane tank that fuels our boat’s cooking system was near empty. We could tell this because the fancy gauge on it, which experience has shown us to be fairly accurate, was flatlining in the red section. Yesterday, after having cleaned everything out of the locker where the tanks reside, I thought I would be smart (efficient) and remove the main tank and switch the system over to our 10 lb. backup cylinder even though I knew that I couldn’t get the other tank filled until next Friday. 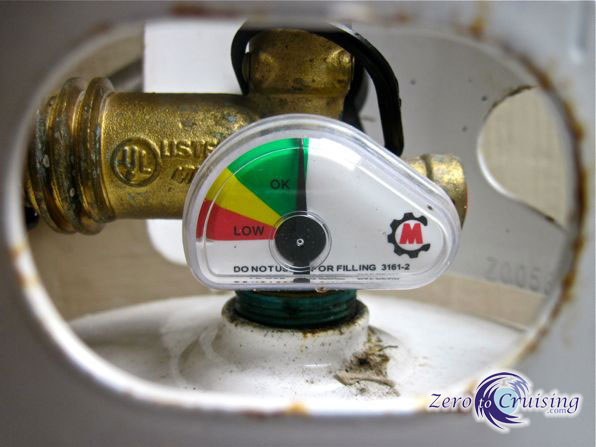 As cruisers here do, we dropped the tank off at the guard gate at one of the boat yards and prepaid to have it filled. Apparently someone will come around and pick up the tanks next Friday and return them to the same spot on the Saturday after topping them up.

We returned to our boat, had a nice dinner later in the evening and even managed to half boil some water this morning for coffee. You guessed it… that it when the second tank, which we assumed still had a fair amount of propane in it, ran out. Without a gauge like the larger tank has, I was really just guessing about how full it was. Of course, if I had known its weight when empty, which I didn’t at the time, I could have weighed it to get some idea of its contents. Would I have done that, down in the bottom of the locker yesterday? I doubt it. Would I do it now, after this fiasco? Absolutely.

Unless we sort something else out, we now have a week to go without propane to cook with. Our friends on s/v Joana have already offered to lend us one of the small green cylinders which can fuel our barbecue grill so that will look after us for today. I know that I can get the larger tanks filled in Port of Spain tomorrow while Rebecca is at school (today is Sunday and the place that fills them is closed). I’ll just have to figure out transportation to get them there as I know that I won’t be permitted to take the propane tanks on the public buses. Fun, fun, fun!

Note: The water in the kettle was just warm enough to make coffee this morning. That disaster was narrowly avoided!

Come exploring with us

All work and no play…

Do not be that guy!