As if catching fish while dodging sharks isn’t enough to worry about, we also need to be aware of the serious threat of ciguatera poisoning. The following article from Cruising Compass, which I saved some time ago, explains the issue quite well.

As we head off to the Caribbean, Mexico and other tropical cruising grounds this winter, we will be sailing into regions where ciguatera poisoning–usually quite rare–is most common. The poison accumulates in the flesh of bottom and reef dwelling fish, most of which are small and not on anyone’s menu. But there are a few common eating fish that can transmit the poison: barracuda, parrot fish, red snapper, porgy, grouper and smaller decorative reef fish. Larger pelagic fish such as mahi mahi, tuna and swordfish can carry the poison if they have been feeding on ciguatera carrying reef dwellers but in very low concentrations.

The symptoms of mild ciguatera poising will be violent vomiting, hot sweats, numbness and tingling of the lips, tongue and inner cheeks, and a strange neurological shift that makes ice feel hot. More severe poisoning will include itching, sore muscles and even respiratory paralysis. In rare severe poisonings, respiratory failure can cause death.

Unless the poisoning is severe, you just have to let the victim’s body take its course as it tries to evacuate the poison. Once the vomiting has settled down and the hot sweats have passed, you can give water and electrolytes. Severe poisonings require rapid medical attention. Stay off alcohol, nuts, seafood and shellfish for a least two weeks to avoid a relapse.

It is hard to prevent ciguatera if you are eating locally caught, coastal fish but there are a few precautions: eat what the locals are eating; if you catch your own, ask a local fisherman if it is okay; avoid brightly colored fish; avoid reef feeders; avoid predators such as barracuda. You can try to test for the poison by pressing uncooked fish flesh to your lips; if you get a tingling sensation, pass on the catch of the day. A new testing kit has been developed by Cigua-Check but we have no experience with it.

To avoid ciguatera, one first needs to know which species of fish carry the poison and then simply, not eat them. Part of the challenge to this though is that we’re only just now beginning to be able to distinguish a few of the various fish that we see. On a more positive note, we grilled up the lobster that we speared for dinner and we can attest, nothing tastes better than fresh seafood that you catch yourself! 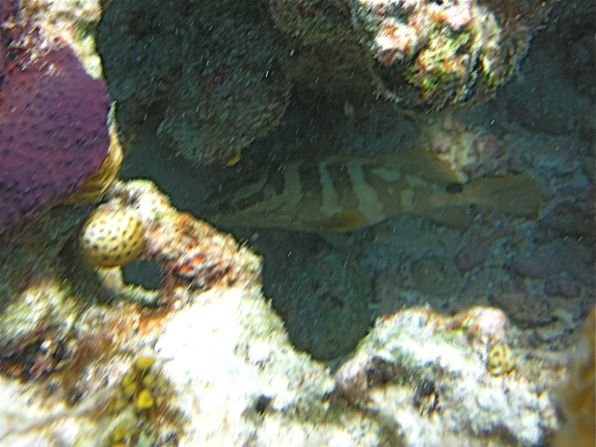 A Nassau Grouper, currently out of season, hiding in a little hole.

Getting to the core of the problem