How long would it take to walk from Toronto to Montreal?

Since leaving Canada on our adventure, we have been asked over and over by friends/family/blog readers if we have any idea when we’ll be in a particular area. Some people even expect that we’ll be able to give them an exact date at which we’ll make landfall on an island hundreds and hundreds of miles away. As frustrating as it is for our friends to hear, we really have no idea. Part of the problem is that because we have never done this before, we really just have no idea how long it takes to travel these distances. It’s like asking us “How long would it take you to walk from Toronto to Montreal?” Yes, we could calculate it, based upon our boats typical cruising speed, but there are so many variables, not the least of which is the weather which controls everything. To add to that, when we get somewhere we like, we stay a while. If we find a place boring or an anchorage uncomfortable, we leave. As such, pretty much any estimate we make would be really out of whack.

by Ann Vanderhoof. I was curious about their travel route so I got out the book and looked it up yesterday. A surprise to me was that they actually stayed in Georgetown for 3 months! They left here late March and ended up in Luperon, DR just 5 days after that. That’s quite a distance, and they obviously blew by a few places to do that, but it is possible to knock off a lot of miles should the stars all line up. 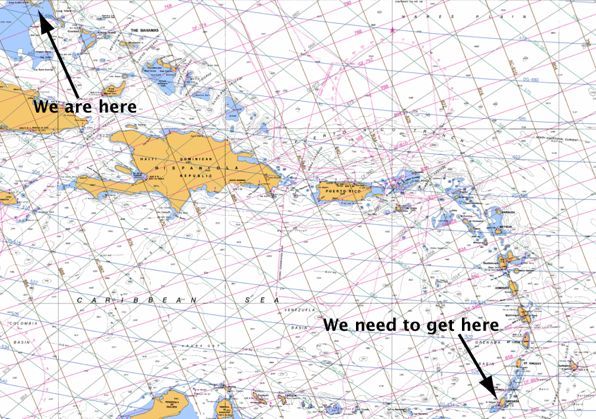