A ride for Carina and for Doctors Without Borders

After over 5 months of cycling through Mexico, shortly before we were to depart the country for Central America, we were guests of a wonderful couple in San Cristobal, Martin and Carina. Only recently we were shocked and saddened to hear that Carina had passed away. Although we only spent a small amount of time with Carina — she was very busy in her career as a medical doctor — her smile and generosity will forever live on in our memories.

A ride in her memory

Martin, an accomplished cyclist who has already traveled by bike from Calgary, Alberta to Ushuaia, Argentina, is taking on a challenge to guarantee that Carina’s memory lives on. He has set out on a quest to ride from Mexico City to Toronto, with plans to stop along the way to speak to the press about his trip and in so doing, raise awareness and money for Doctors Without Borders, the organization that Carina worked for. 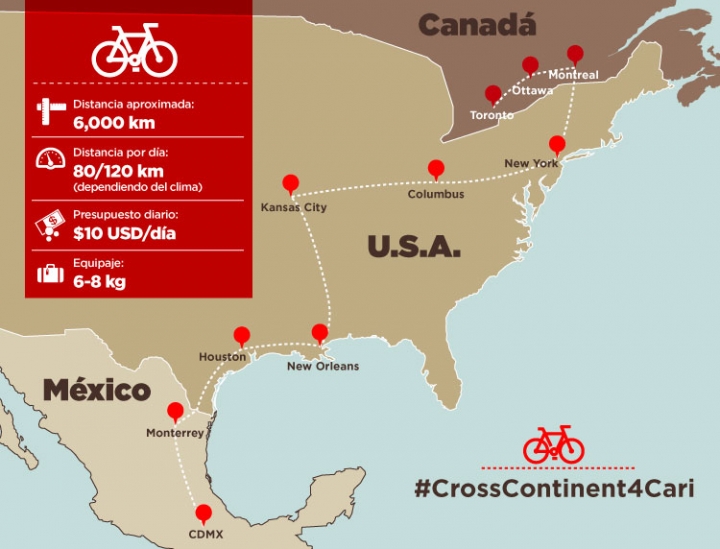 Dr. Carina Valdespino was a general practitioner, graduated from Instituto Politecnico Nacional. She later moved to Barcelona to receive her Master in International Health from the University of Barcelona and between 2015 and 2017 she worked as Deputy Medical Coordinator of the MSF mission in Mexico. During her time working with MSF she helped in the development of the projects the organization runs in Mexico and Honduras, which focus on providing care to victims of violence, migration, reproductive healthcare and victims of sexual violence. Carina also worked for other international organizations, such as the International Committee of the Red Cross and Doctors of the World, but as Martin mentions, she had a special fondness for her work with MSF.

If you’d like to follow along with Martin on his journey, he’ll be documenting it on his social media channels, linked here on his webpage. There are also links on that page where you can contribute to Doctors Without Borders in Carina’s memory. Godspeed, Martin!

FASS Bikes: a desert oasis for us bikepackers