When boating and cycling worlds collide

From the time that we first started planning our cycling trip south, we had always imagined that we may, at some time, be able to connect with some of our sailing friends along the way. We were particularly aware that our friends David, Janice, and Steve had chosen the Rio Dulce area in Guatemala as their hurricane hole for this season. On several occasions, we had discussed the idea of hooking up with them but the question in all of our minds was, would our mutual travel schedules allow it? We couldn’t be happier that the stars lined up to make it happen! 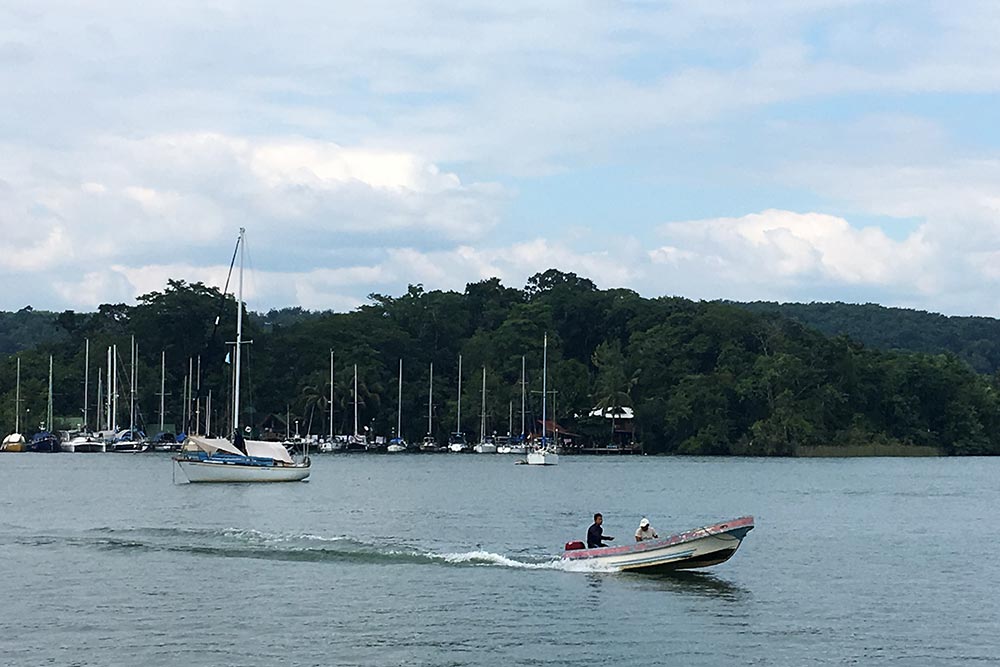 Once again, we found ourselves surrounded by boats and cruisers.

The time we spent with our cruising friends in the Rio Dulce is the closest thing that we have had to a vacation since we started our cycling trip. David and Janice set us up in an air-conditioned cabin on their beautiful Dean catamaran, Livin’ Life. The boat was docked at Catamaran Marina, a resort-like island just a few minutes away from the town center by dinghy. We did essentially nothing while there except hang out with them and our friend Steve, enjoying the downtime in the idyllic setting. That, and stockpile some extra calories for the days to come! 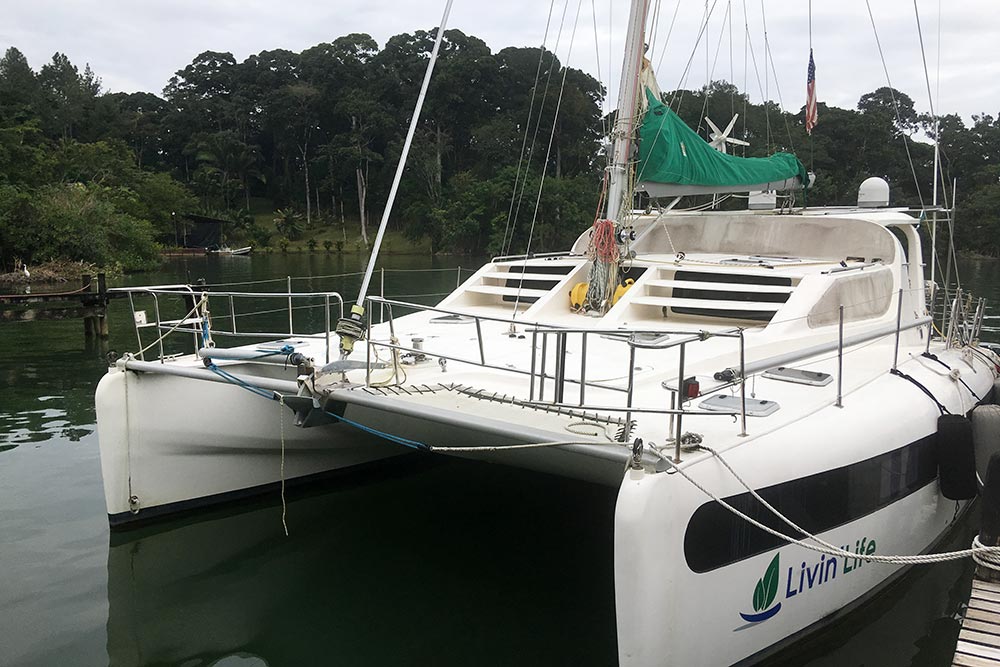 Our digs while we were in the Rio Dulce, Livin’ Life.

Did our time with them make us want to give up on our cycling journey and return to boating? Definitely not. As luck would have it, Mr. Murphy had paid our friends a visit just before we arrived, stopping their refrigerator from functioning. We got to witness first hand the repair drama that is such an ongoing part of boating, something that we do not miss at all. Our friend Steve helped too because his boat, Slow Flight, was on the hard undergoing a refit, one that was already weeks behind schedule. Thanks, guys. We appreciate that reinforcement, especially because I know it cost you all a bunch of time, effort, and cash! 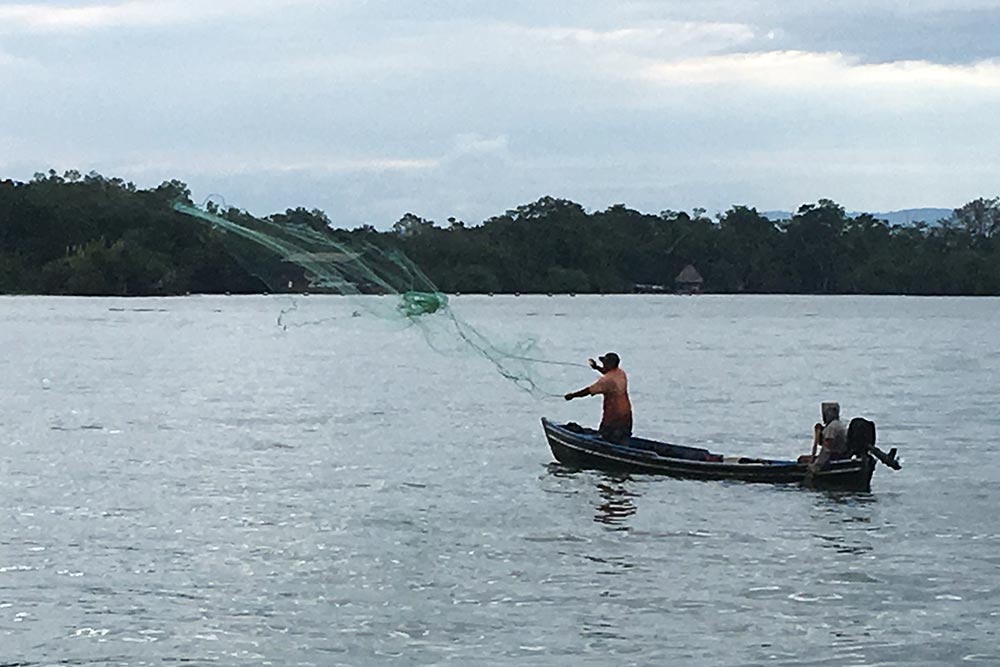 Enjoying morning coffee on the dock while watching fishermen cast their nets.

On the morning that we had planned to leave our friends, rain poured from the sky. As we packed our bikes to catch the 7:30 AM ferry from the island back to the mainland, whatever thoughts we may have had about remaining there until the weather improved were quickly dismissed. Riding in the rain is a part of cycling and one that we have largely been able to escape. I felt that it was time for us to pay our dues. 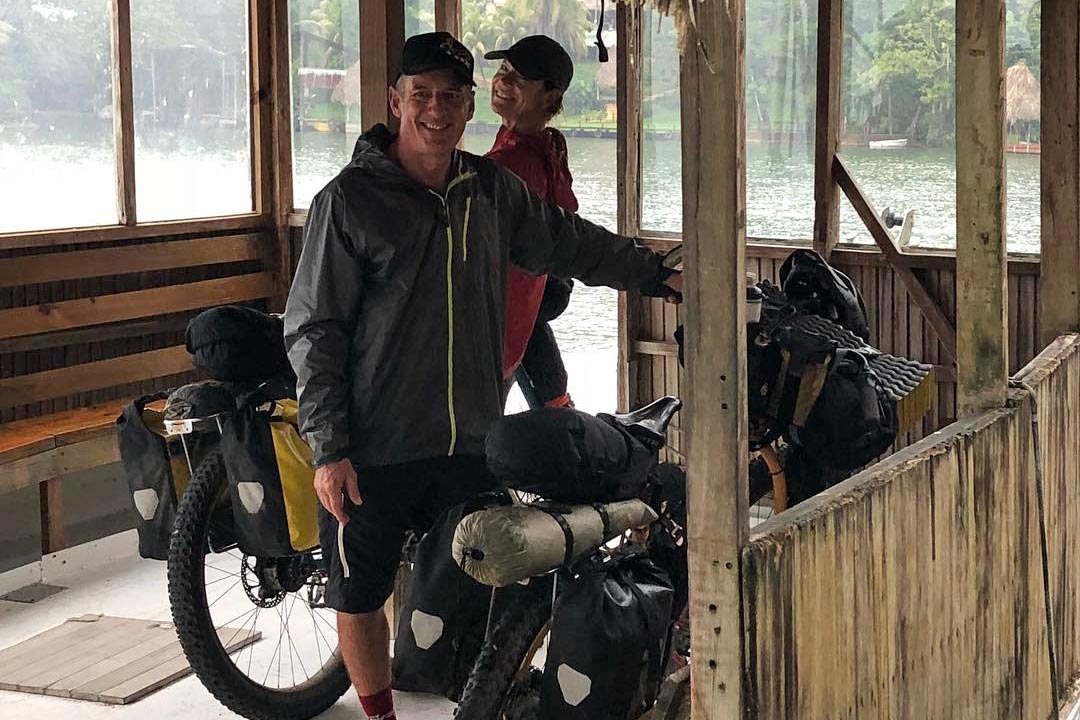 On the ferry heading back to the mainland. Bye bye, Rio Dulce!

Our first planned destination was a hot waterfall we had read about called Agua Calientes, or Finca El Paraiso. The road we took to get there was both paved and quiet, and the pouring rain had largely abated. We noted that many of the dwellings that bordered the road were very simple shacks, seemingly without electricity, a fact that was extremely ironic given the high-voltage power lines that ran across the same land that the buildings were located on, sometimes butting right up against them. 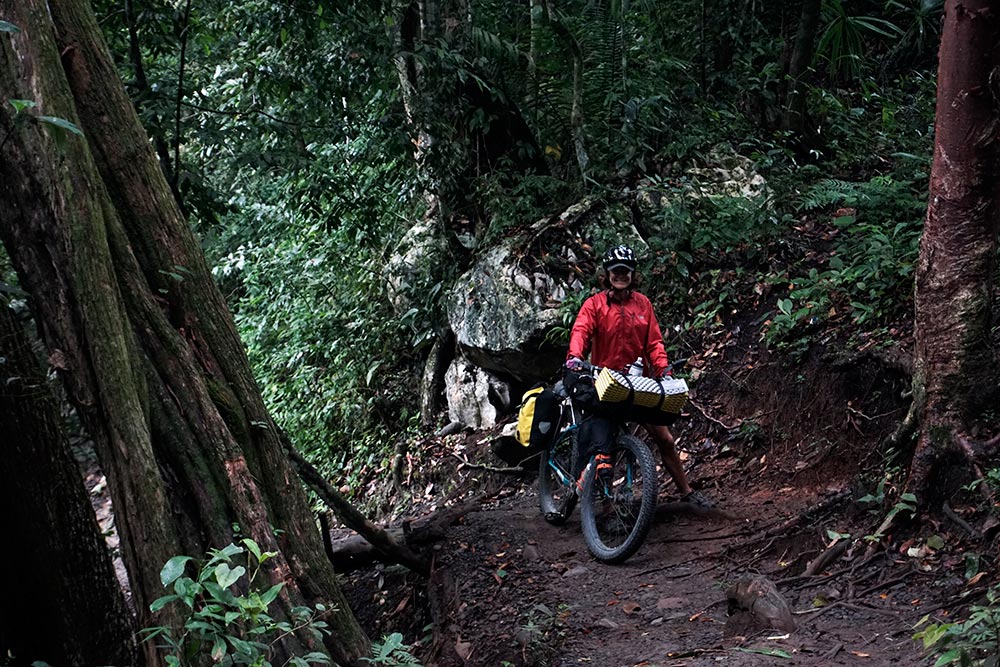 The trail to the waterfall was super slippery!

Because our friend from Oaxaca, Alex, had given us the GPS position of the waterfalls, we didn’t ride right by them as he had when he completed a similar trip. It’s possible that we may have done so because the spot could use a better sign. We paid 15Q each (about $2.00 US) to enter the park and rode our bikes down the slippery trail right to the top of the falls. The scenery alone was worth the effort to get there but the real treat was the steaming hot waterfall itself. What followed was perhaps the longest Hollywood shower ever! 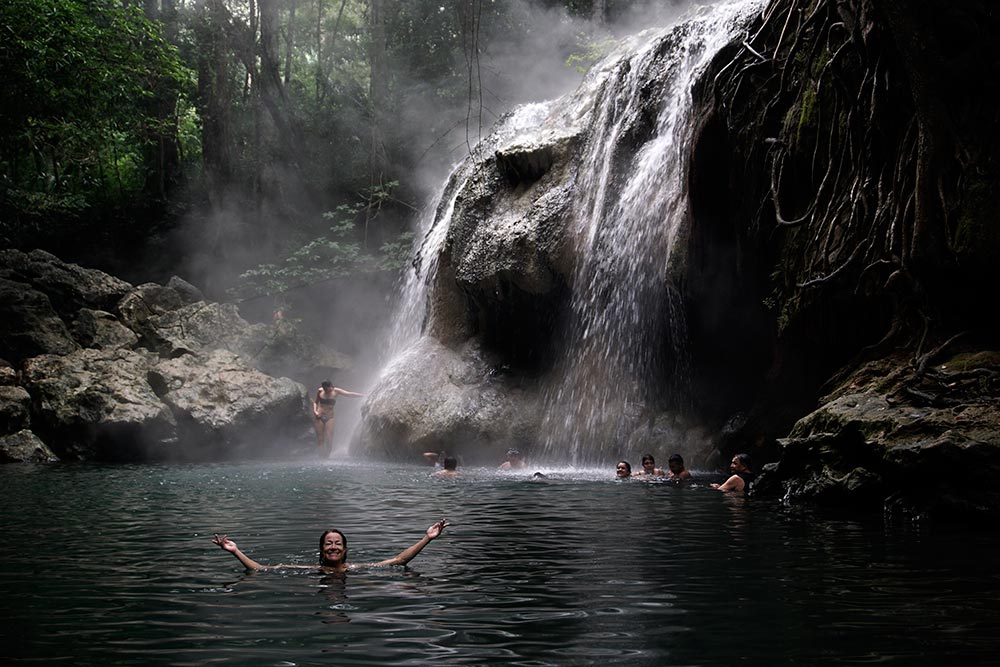 The waterfall was amazingly hot and the pool was quite comfortable.

From the waterfalls, we rode the short distance to El Estor, a town on the north shore of the huge Lago (Lake) de Izabal. Just inside the town’s border, we stopped briefly to consult our GPS when a car pulled up alongside us. The driver rolled down the window and while smiling exclaimed, “Welcome to El Estor! Can I help you find something?” When I explained that we were looking for an economical place to stay, he simply said follow me and led us a few blocks down the road to a basic hotel. He told us that the place we were stopped beside was cheap but just around the corner was another, much better hotel. I took a look inside the first one and it was indeed rustic, for lack of a better word, so uncharacteristically, we decided to visit his second, better choice. That’s when we found ourselves at Hotel Vista al Lago. 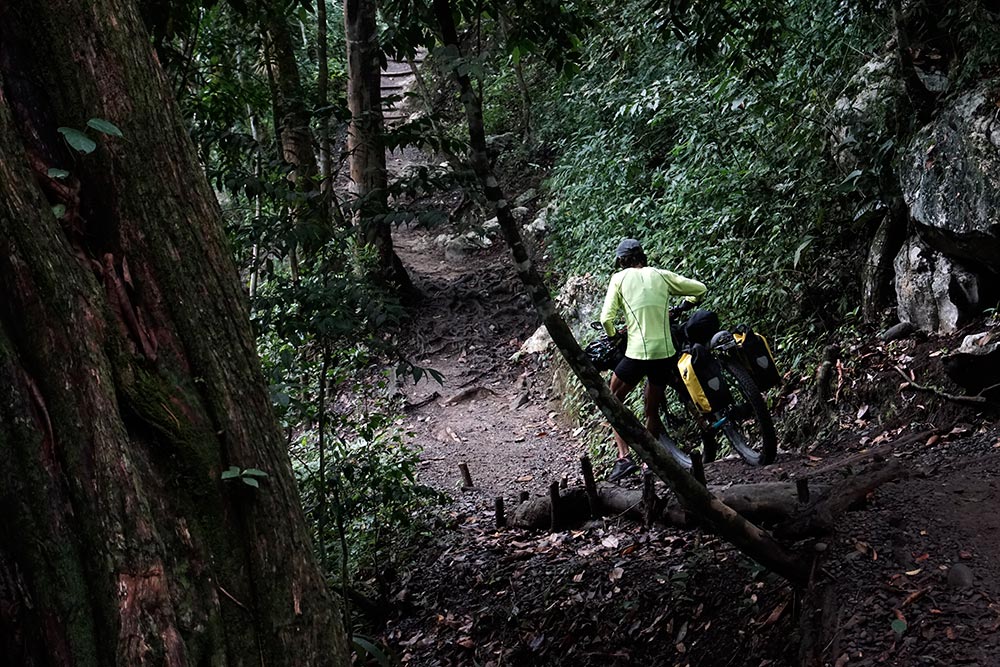 Heading back to the road to ride towards El Estor.

This hotel was quite a number of steps up on the scale from the one we first viewed but only a few dollars more expensive. What made it extra special was the friendly couple who ran the place. Oscar, the man of the house, had an ear-to-ear smile almost all the time and is also quite the visionary. 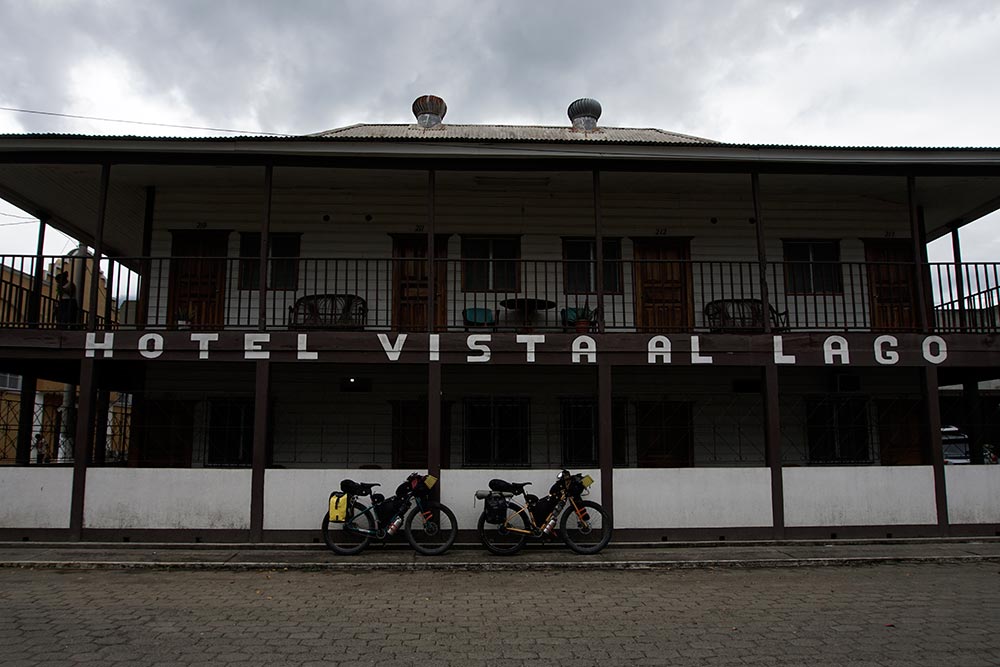 We were told that the hotel was approximately 250 years old and that a store was first built in that location by an Englishman and a Dutchman. Because they couldn’t pronounce the Spanish name for the area, it became known as the Store. El Estor, get it? I did not fact check this so take it for what it’s worth. 🙂 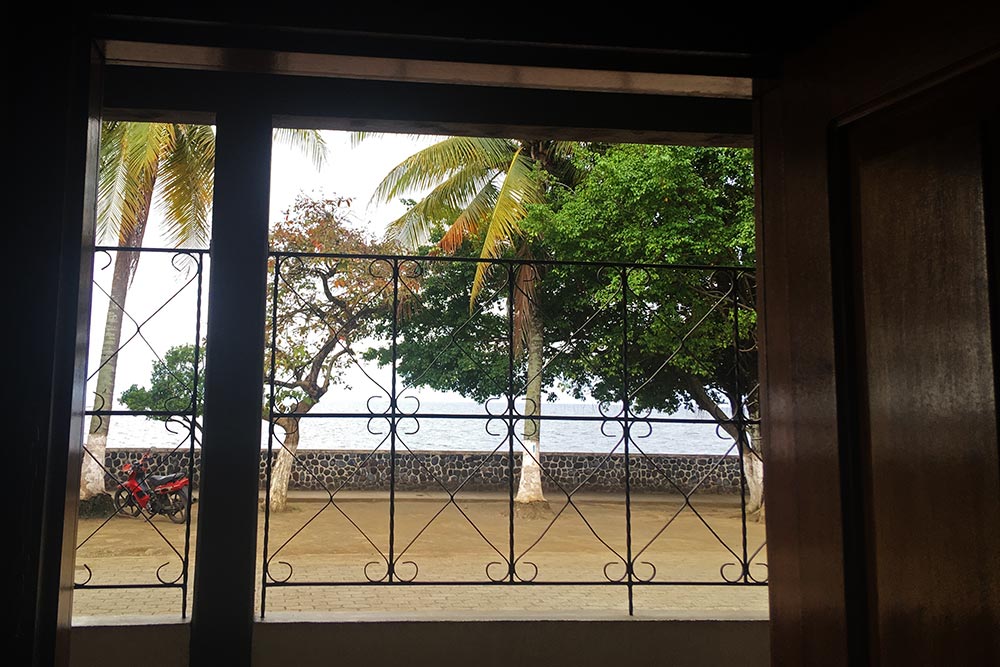 The waterfront view from our room.

After getting ourselves settled, we relaxed on the hotel’s veranda. It was there that we had a nice talk with Oscar about his dream of having someone develop a marina in his town. He spoke at length about the location’s merits, and especially about how everyone could benefit from the development. He was particularly adamant about how they, the town’s residents, need to think about the future. The future as in not just this generation but the generations to come. The location does seem like it would be well suited for a marina to me but what do I know? Any marina developers looking for a well-protected place to build? If so, look for Oscar at Hotel Vista al Lago. 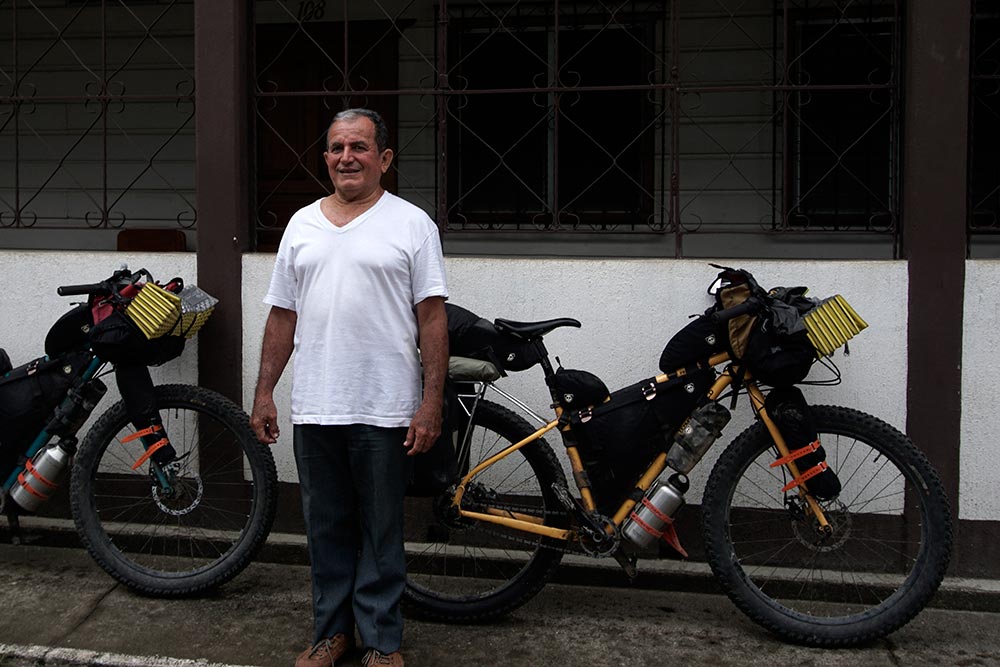 So long, Oscar. I hope you can make your dream of a marina in El Estor a reality.

If only our dinghy could repair itself

Spion Kop – Adventures on our doorstep

Could Zacatecas be the most beautiful city in Mexico?