Curious about how our self-imposed 30-day alcohol hiatus went? Rebecca and I completed it without falling off the wagon even once, as I knew we would.

Funny story though… after that entire month with no alcohol, Thursday was the first day I was “allowed” to have a drink. I had actually decided earlier that day to extend my break from drinking even further, although perhaps not quite as hard-lined as the first month. Out of the blue we got a telephone call from a brand new Grenadian friend who wanted to come to visit us on our boat, “with a bottle.” We, of course, said yes and when he, and his cousin arrived, we shared a couple of glasses of rum with them. On Friday we were invited to join them for a bit of a lime and some barbecue, and although there was some drinking going on, I opted to abstain.

Although this didn’t apply on Friday as we were in a bar, we’ve found that the secret to easily abstaining is to bring a beverage with us when we go out. We typically carry ours in a Nalgene bottle

or our super-large 52 oz. Bubba Mugs

(those mugs Rock by the way, all cruisers should have one). By doing so, no one can actually tell if we’re drinking alcohol or not. 🙂

This morning we’re off with some friends to repeat last year’s feat of climbing Diamond Rock, something that’s guaranteed to be much easier to do without an alcohol-induced hangover! 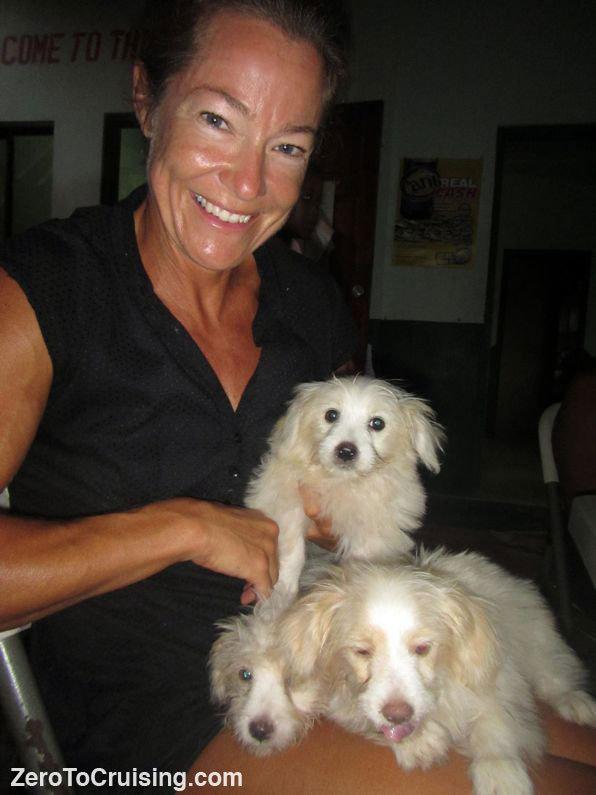 Liming with some new friends of both the two-legged and four-legged variety! In other news though, we were first chased and then later prevented from returning to our dinghy by a pair of guard dogs that were much bigger and significantly less friendly than these three!
Mike 5:04 am

A busy day in Grenada!

Things that go thump in the night