Yesterday’s “rug to shake*” was cleaning our family car, aka our dinghy. Unfortunately, dinghies, like larger boats, don’t stay nice and shiny clean when they sit motionless in the water. Instead, barnacles and other miscellaneous grunge, take up residence on their hulls. Our job yesterday was to evict them.

Step one was to take the dinghy to the beach and remove the engine and all the other crap that we carry in it. Following that, we flipped the “car” over and set to work with our scrapers, removing the hard barnacles from the fiberglass bottom and the inflatable tubes. We used both a windshield ice scraper and a metal scraper for this job.

Hint 1: For those hailing from northern climates, purchase a couple ice scrapers for your boat! Our friends suggested that we do this before heading south and we have used them many times when cleaning the bottom of ZTC.

One needs to be a bit more careful with the metal scraper, especially on the tubes. After the hard stuff was taken off, we broke out the brushes, attempting to remove the disgusting slime that was covering our dinghy’s bottom. We used both Soft Scrub with Bleach

and Sno-Bol, a Toilet Bowl Cleaner

, to help with the task, the latter being much more effective.

Hint 2: We have been told that the active ingredient in Sno-Bol

is the same as that which is in the effective, but expensive On and Off – Hull and Bottom

. It was also suggested on our Facebook page that we could have just used diluted bleach for the job. We didn’t try this but might give it a go next time.

The job required both some patience and elbow grease to complete and although I won’t go so far as to say that the dinghy now looks brand new, it was shiny enough that it caused some dissent from the owners of the other dinghies that we parked next to during happy hour on the beach later in the day. Sorry guys, we’ll try to park further away next time. 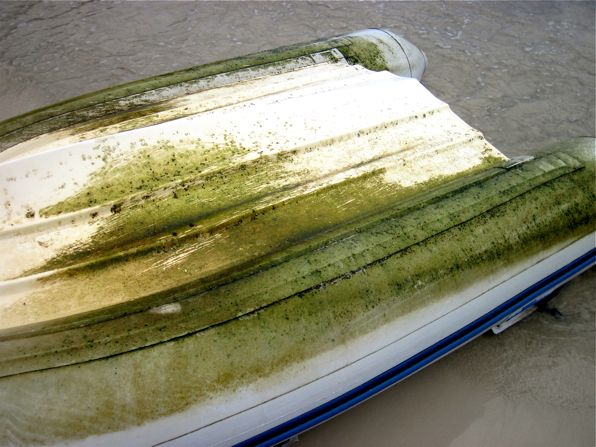 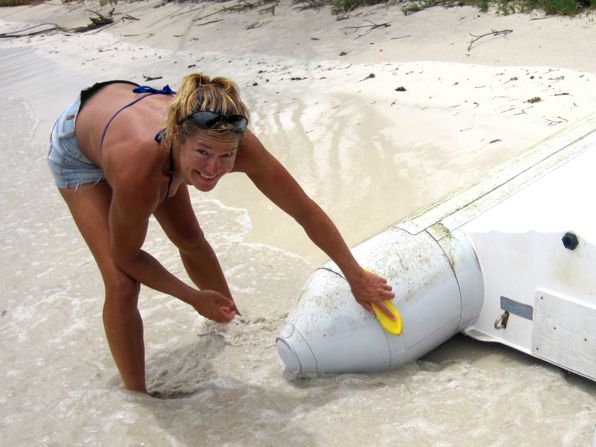 At least one of us is working. 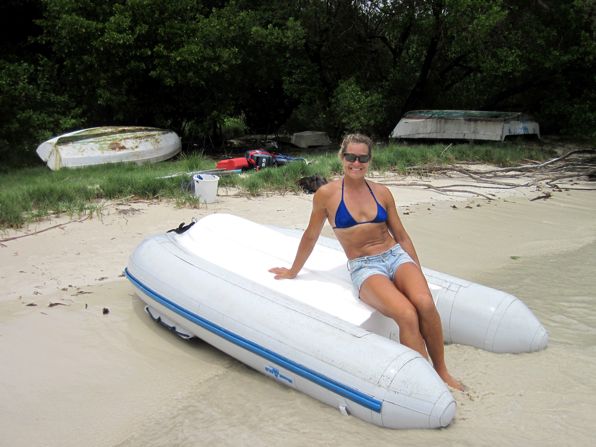 *In case you didn’t figure this out from previous posts, “shaking a rug” is our new phrase for “completing a boat chore.”

Not just for work!

New exercise inspiration: Getting Ripped on a Boat