What makes you happy?

The last couple of days in ZTC-land have been filled with music. It all started out with an impromptu jam session with our friend on Hog Island and inspired by that, several more hours were devoted to musical practice and play.

by Bob Marley. Rebecca and I ended up having our own cool little jam session with me on the Uke and her playing the nice set of bongos that our friend Jim gave us. 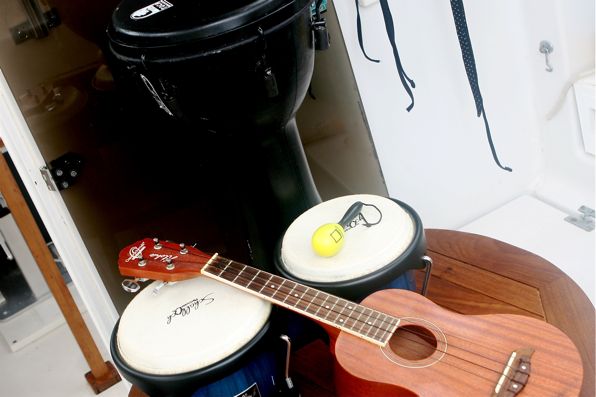 For the benefit of those beings originating from another planet who are not actually familiar with those two songs, the lyrics of both focus on avoiding worry. We all know that so many of the things that we worry about in our day-to-day lives never even come close to occurring or causing us problems. Here’s a recent example. A week ago Rebecca and I were at a bar for happy hour. Well, as often happens, happy hour turned into happy several-hours. The very cool bartender working there was treating us very well, including offering us free drinks here and there. When the time came to leave, it ended up being a bit rushed and after we returned to our boat, I was convinced that I didn’t pay our tab (my memory was a bit cloudy at that point). I stressed about that for an entire week as it took that long for us to get back to see him. When we finally did, it ended up being a non issue. Apparently I had in fact paid our bill before leaving and even if I hadn’t, I’m sure it wouldn’t have been a big deal anyway. Plenty of stress and worry for nothing. Now, you might feel that the things you stress about are much more significant than that and deserve your worry. Perhaps so. I just know that the act of worrying won’t solve them one way or the other.

Want some more psycho-babble inspired by those two songs? I was also thinking about what makes us happy here. Big things like ice cubes, a refreshing rainwater shower, a cold beer on the beach, a hard workout (that one came from you know who) and spending time with our friends, or each other, playing music. Big things, right? No new cars, big-screen TVs or $800.00 suits required. Such is the life on a boat. We don’t have room for things like that so they never enter into the equation.

Even though space on a boat is at a premium, I would suggest though that every person heading out cruising should devote at least “a bit” of room on their boat for a musical instrument (or 2 or 3). Even if you don’t yet play, what a perfect time, and place, to learn. If there’s one thing you’ll have on a passage, it’s free time, and with the exception of your traveling companion(s), there will be no one around to hear you struggle during the early stages of learning. You might want to throw in a set of ear plugs for them though, just in case. In closing, be happy! 🙂

and although definitely not the original version, you gotta love Playing for Change!

Nothing happens in this video, and that’s the point!

Bolt on, bolt off