Our recent trip to Fort de France, Martinique marks our third stop in that anchorage. I have never been to France but if my imagination is accurate, that Martinique city is very much like one in their faraway kinsman’s country. As Rebecca and I prepared to head to town to shop and explore, I commented to her that she seemed to be a bit dressed up for such an excursion. She replied by saying that she always feels underdressed when walking around Fort de France and to tell the truth, I can see why she would feel that way. Most everyone there looks tres chic!

One of the items that we were both shopping for in town was a new pair of sunglasses. Rebecca’s had recently broken and I left my old and cracked pair on a bus in Roseau (I swear that I did not do so on purpose just so that I would have an excuse to buy a new pair). A comfortable pair of sunglasses is a necessity here in the tropics, especially for someone like me who tends to squint even on the cloudiest day. When we first left Canada to go cruising we had onboard a box full of various pairs of sunglasses, all collected from our gym’s lost and found. That supply has all but vanished though, each pair having been lost to the rigors of our active lifestyle. Fortunately, there was no shortage of sunglasses to choose from in Fort de France. Every street corner sported a vendor with a rack of cheap ones to sell and in addition to those, several optical stores stocked all of the latest name brands. We each chose something that we felt comfortable with and our eyes are much happier because of it. They question now is who will be able to hang on to their glasses the longest, Rebecca or me. Considering that I spent a fair bit more on my pair than she did, I think we’re both really hoping that I’ll win out. 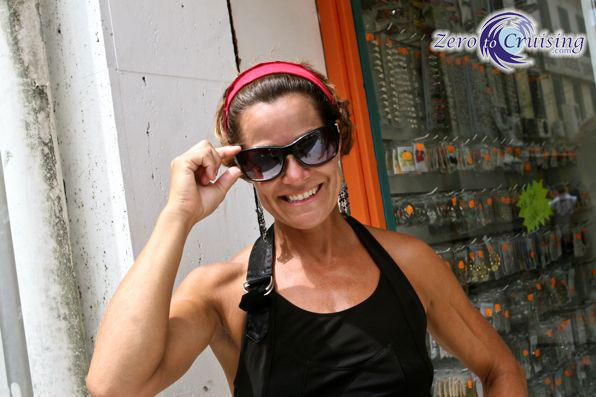 New sunglasses purchased in Fort de France. Guess what though…
this is an image taken from a previous trip to that city.

In contrast to Fort de France, we’ve spent the last couple of days in Grand Anse d’Arlets, a touristy little beach town. This morning we’ll be raising anchor to move around the corner to Le Marin, a trip of about 13 miles or so, 10 of it being dead east. Because of that last part, our plan is to depart at 6:00 AM before the trades pick up. That will hopefully make the trip a tad easier.

You know the day can only get better…

Do not skip the Bahamas!