We made it from Little Falls to Canajoharie yesterday and were able to tie up on the town’s free dock. We transited through three locks yesterday, including one with a 47′ lift, the highest in the NY Canal System and one of the highest in the world. Even though we are far from experts, once you get the drill down, going through the locks is not that difficult. We have even met a couple of people who take their (pretty large) boats through by themselves.

I thought it might be helpful to list some of the tools you should have on hand to make the process easier.

For these canals, the NY State Guide Book is gold! Buy it!

If you have a sailboat you will need to unstep your mast to transit the canals. Doing so likely means that your VHF antenna has also been removed. Unless you have rigged a replacement for this so that your primary VHF radio is of use, you’ll want to have a handheld unit so that you can contact the Lock Masters. In the NY Canals the Lock Masters monitor channel 13.

As we near the lock Rebecca would typically hail the Lock Master saying something like this:

“Lock 13, Lock 13. This is the catamaran approaching from the west. Requesting eastbound transit.”

Sometimes they answer right away. Other times it takes a while. 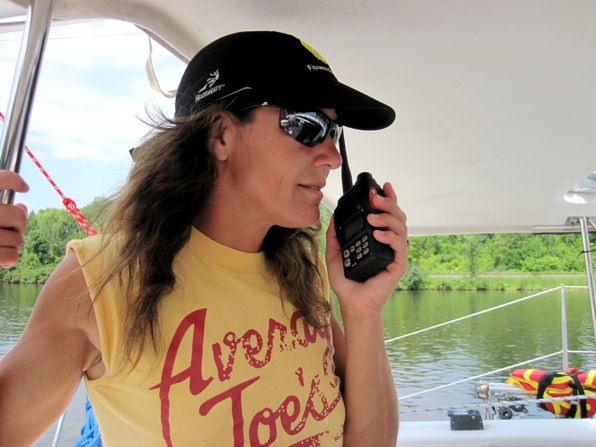 You’re going to want to have plenty of fenders. We have only been tying up on our starboard side and thus have none to port. If we had more fenders, it would actually be nice to have some on that side, just in case we were forced to go to the opposite wall, or in case some other boater came too close to us.

To protect the fenders from the sometimes rough and always slimy lock walls, many people use fender boards. The boards are rigged to hang in between the fenders and the lock wall, protecting them from abrasion as the boat moves up and down. We were given a couple of very nice fender boards just before we left to come down here and they have worked perfectly. If you look in the photos below you’ll see that they were constructed by drilling a hole down through the board as opposed to side to side. I think this is best as it eliminates the possibility of the line chafing as it rubs on the stone walls. One point to be aware of with respect to the boards… on a few of the locks there as some large pockets in the stone. Take care that your boards don’t get hung up in one of them as you move up and down. 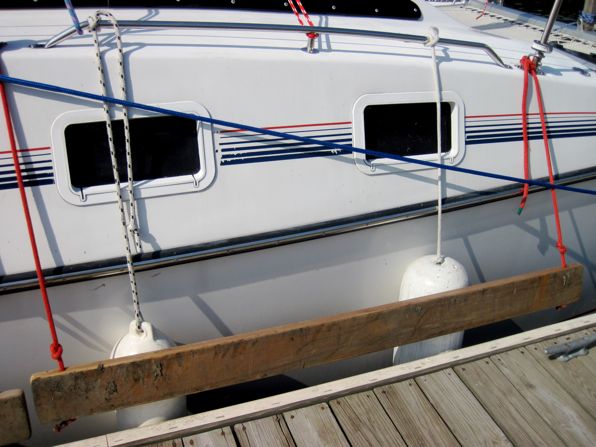 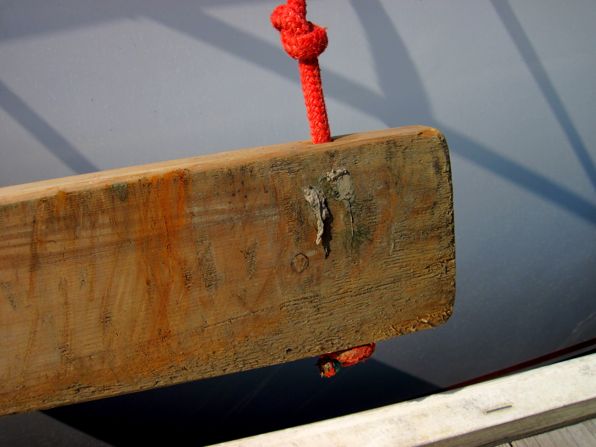 The process of going through the locks works like this: Once the doors open and you receive a green light (Note: sometimes the lights weren’t functioning), you will motor slowly in, taking a place along one of the walls. In many (all?) of the locks there are ropes hanging down which are attached at the top. In others there are cables running vertically, attached both at the top and the bottom. Sometimes there are also vertical poles. Regardless, as you come to a stop you’ll need to grab onto one of these things. A boat hook, or two, makes this job easier. 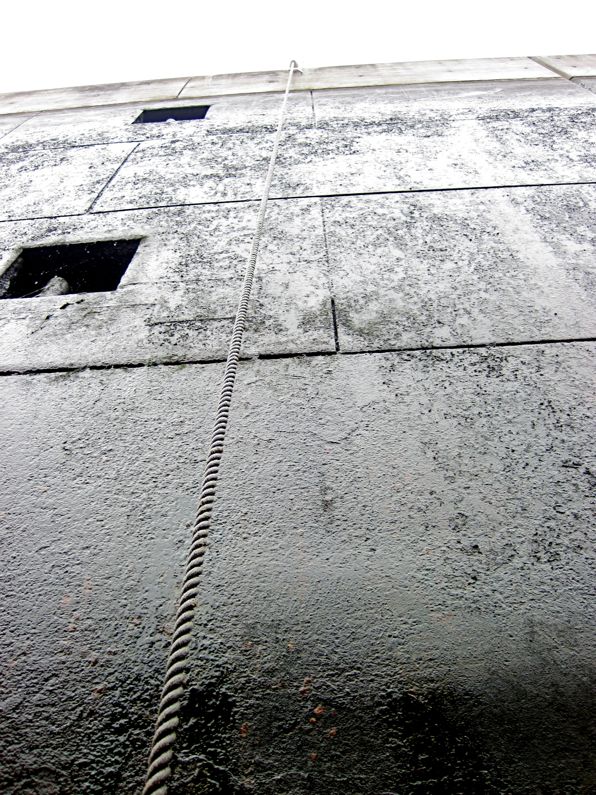 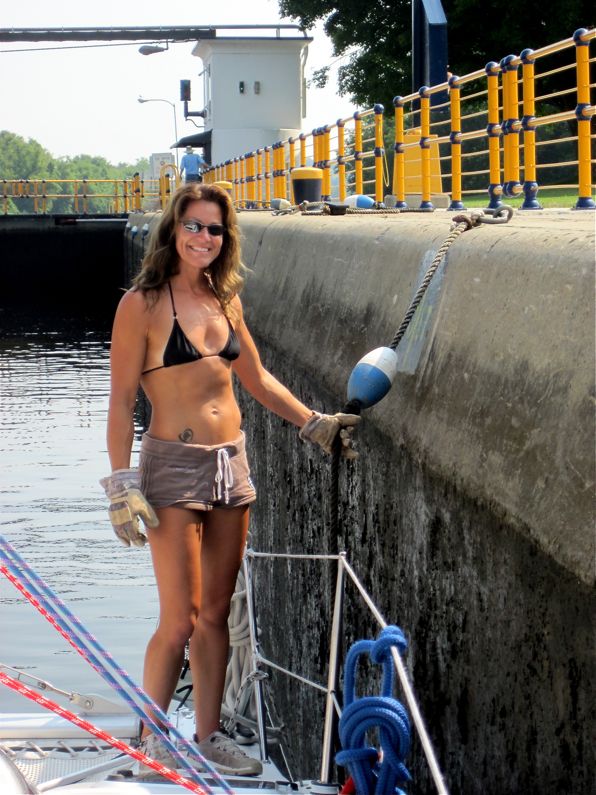 Some heavy duty leather work or garden gloves will be nice to have to protect your hands from the wet, slimy ropes. 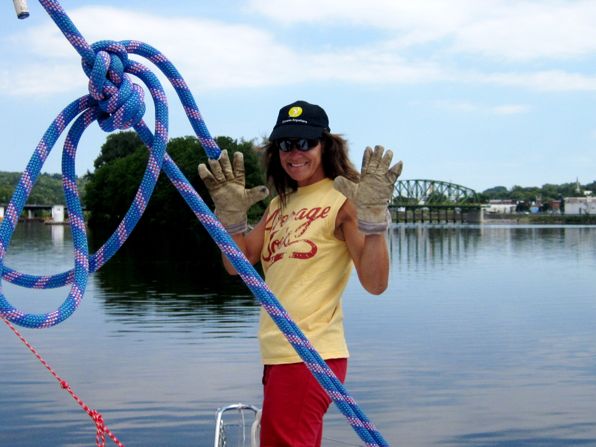 If you have access to one of the cables or poles running vertically in the lock, a good way to hold your boat in position is to loop a length of line around it, sliding it up or down as the boat moves. This method of hanging on gives you much more leverage and control. Note: DO NOT SECURE THE LINE TO YOUR BOAT! Hold it in your hands. 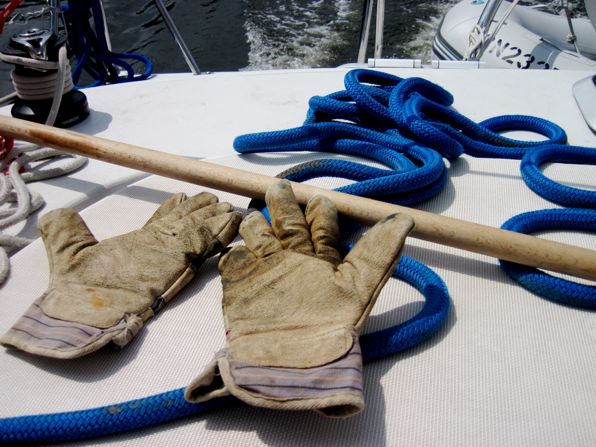 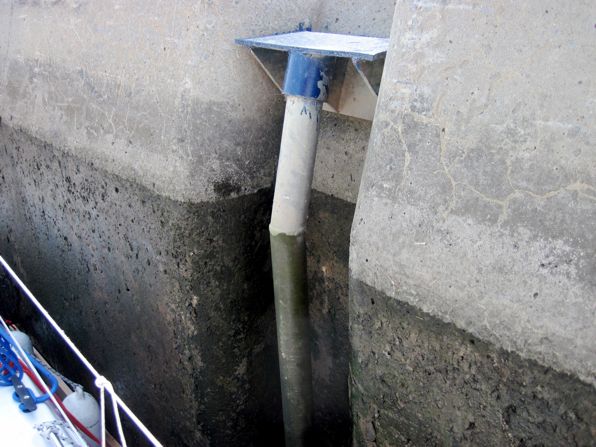 Another note on where to hold on: In each of the locks there is also at least one ladder which runs up and down. The two people we spoke to who said that they single-hand their way through the locks said that they prefer to hold on to the ladder. This requires moving the line a few times as the boat moves vertically but they feel it gives them the best control. We have yet to try this.

We only have one boat hook but we do have another pole we use for fending off. When the lock doors open and it’s time to leave, both Rebecca and I will give our boat a big push off the wall, making our exit from the lock easier.

Have your lock transit pass number memorized or written on a scrap of paper in your pocket (we kept the original in the boat). Typically on your first lock of the day the Lock Master will come around and ask you for this number. It’s pretty tough to go and get it while you are supposed to be holding onto a line. Ask me how I know this?