The crown needs to be relinquished

Back in September I noted that our trip from Grenada to Trinidad on Frost had to have been the slowest passage ever. I think I used those words specifically. Well, the crown needs to be relinquished. This morning we arrived in Grenada after 26 hours of traveling from Trinidad. TWENTY SIX HOURS! Rebecca could have quite possibly swam that distance quicker! 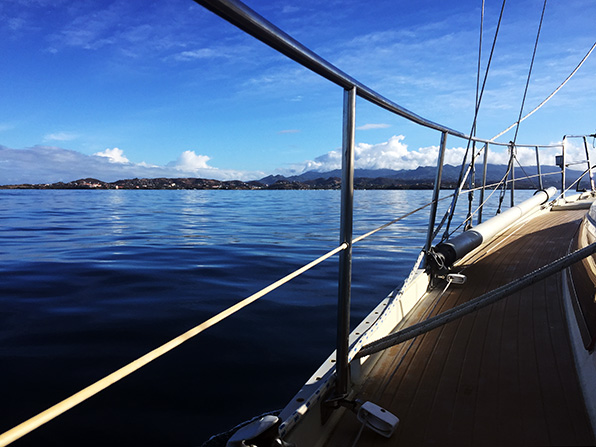 The south coast of Grenada this morning. No wind!

After a whirlwind of activity the day prior, where we relaunched Frost from Peake’s at 3:45 PM, rushed to customs to clear out, trying to dock and get to the office before 4:00 PM so that we wouldn’t incur overtime charges (that didn’t really work out), and then rushed to the fuel dock to purchase diesel before leaving (we got yelled at for being late there too), we planned to awake at 5:00 AM to make way to Grenada. Why the rush? The weather forecasts that I was checking showed that the wind was due to increase, and shift to the north the following day, giving us a very short window to make a comfortable passage.

As it turns out, we slept through our alarm, but still managed to cast off from our mooring ball at 6:30 AM. Alas, we wouldn’t make it out of the harbor before turning back.

We had completed a few jobs while on the hard that were due monitoring before setting out on the ocean. We had the guys from Dynamite Marine replace the packing material in our prop shaft stuffing box, and our rudder post stuffing box, again. You may recall that we had that done the last time we were here. If you read through the comments on this post, you’ll see some notes about the graphite packing material that was used. We had them remove that, and replace it with the more traditional type of packing material.

In addition to that, we also tore apart the engine’s cooling system, having the heat exchanger cleaned and repaired, and the thermostat replaced. Both this job, and the previous one, received only a cursory check before we set off from the yard.

As we motored away from the harbor, I carefully monitored each of these things. Sadly, I noted that our engine’s temperature gauge was fluctuating wildly, back and forth. I also thought that there was more water dripping from the prop’s stuffing box than there should have been. Both of these items were enough to give us reason to turn around and return to the harbor. As we motored back to our starting spot, up-current this time around, I sent off an email to Graham at Dynamite letting him know about our situation. Before he could respond though, I managed to find the culprit for the temperature fluctuations: some loose wires. I also found that with some additional time underway, the dripping around the stuffing box moderated. So much so that with both of those issues under control, we confidently set off again. Time spent: only 1 hour. It was now 7:29 AM.

The area just north of Trinidad is almost always void of wind. Yesterday was no different. As we motored out of the island’s wind shadow, I was happy to see that our engine’s temperature gauge was holding solidly at 89 degrees, at least 6 degrees less than we were used to. Woo hoo. The effort invested in fixing the cooling system had paid off.

The wind filled in a bit and with full sail up, we were, at times, able to progress with a reasonable speed. There were other times though that the wind would drop, forcing us to motor sail. At one such point, when I was at the helm, I glanced down to the temperature gauge and saw that it was up over 100 degrees, far higher than it should have been. What happened to our 89 degrees? I immediately put the engine in neutral and glanced over the side to see if we still had cooling water coming out of the exhaust. We did. I shut down the engine and opened the engine room to see what was amiss. It didn’t take long to find the culprit, a broken fan belt. Not a big deal, right?

There are two things that made this a bigger problem than it should have been. For starters, our engine has three belts running on the engine. The belt that broke was the inner-most one, requiring me to remove the other two first before I could replace the broken one. The second problem was that in amongst the 20 or so spare fan belts that I found on board, there didn’t seem to be an exact replacement for the one that came apart. Sorting through those spares was on my never-ending todo list.

Even though I didn’t find an exact copy of the one that broke, I found one that appeared to be close enough that I was willing to tackle the job. I would have simply continued sailing to Grenada but by this time, the wind was so light that we were barely ghosting along. The calm seas made the claustrophobic repair job a bit less painful, but it still wasn’t fun. I was ultimately successful though, and I can happily say that the belt was replaced without dropping a single bolt into our bottomless bilge. When the coolant was topped up again, and the engine was restarted, it was back to purring along at its comfortable 89 degrees. Until…

At some point after the sun had set, our bilge high-water alarm went off. That didn’t concern me too much as before we had left the yard, we found a small fresh-water leak that we had not yet addressed. After turning off the fresh water pump though, the alarm went off again. That made me a bit more concerned. Rebecca and I then made the rounds, checking all of the normal areas where water could possibly enter the boat (through hulls, etc.). With everything dry, I opened the engine room to see if there was a problem there. Bingo! Water was spraying everywhere. Sigh.

Before I shut the engine down, I tried to pinpoint where the leak was. This was difficult as the water was dripping onto a belt and spraying in various spots. We shut the engine down and began to troubleshoot. For quite some time, I would have Rebecca start the engine while I was in the locker, I’d guess at where the water was coming from, and then have her stop it. We’d then close the water valve, remove a hose or part to inspect it, and finding nothing wrong, replace it. I ultimately removed the raw water pump, thinking that it might be the problem. Unfortunately, I was unable to get it apart, and even broke a screw off in my attempt. I had no choice but to put it back on the engine, unchecked.

Now with no engine, our Plan B strategy at this point was to simply sail to Grenada. There was only one thing stopping us: wind, or rather, a lack of it. At 11:00 PM, we found ourselves 7 miles west of Point Salines, the south-western tip of the island. We flip-flopped back and forth between trying to sail to Prickly Bay, upwind, or St. Georges, in the lee of the island. Given how light the wind was at this point, we decided to try for Prickly Bay. For the next 9 HOURS we beat into the light air on the south cost of Grenada, never making it closer than 4 miles from our destination. With the strong current, and the lack of wind, there was little hope that we’d ever make it. We needed to try something different.

Now with good light, we hove to, to begin Plan C. We dropped our tender in the water, and lowered the outboard engine from the rail onto it. We then hip-tied the tender to the boat, hoping that with the super-light conditions, we’d be able to use it to help the boat along in the right direction. Sadly, this wasn’t to be. A tiny dinghy is no match for a 12 ton boat, even in calm seas. We had to call it quits before either wrecking the dinghy, or injuring one of us in the process.

We set sail again, if you can call drifting as we were sailing, and noted that we had actually moved a tiny bit closer to our goal. Woo hoo… we were now only 3.9 miles from Prickly Bay!

Figuring that whatever had gotten wet in the engine room couldn’t get much worse, I decided to fire up the engine once again, in spite of the leak. We closely monitored the coolant water exiting the exhaust, and the temperature gauge. With both looking good, at just a bit above idle, we motor-sailed slowly into port. While doing so, I contacted Palm Tree Marine to enlist their help with the repair. Our friend Dirk also lined up a mooring ball for us, right beside his boat.

After our buddy helped us tie up to the mooring ball, I removed the water pump once again to deliver it to Palm Tree. With the dinghy already rigged and in the water, we were on shore promptly to clear in to customs, and begin the repair process.

It took us 26 hours exactly to get from Chaguaramas to Prickly Bay, and as I said, that has to be some kind of a record. A bad record, one that no one should ever try to beat! And the party never ends!

PS: This post was delayed a few hours as both Rebecca and I felt that we were due a nap!

Rum vs. Rhum: which do you prefer?