One thing we have come to appreciate with our PDQ is the tremendous ease of access to virtually every place on the boat. I am referring in this case to the areas hidden behind bulkheads, cabin liners, etc. Each one of these is fixed to the boat with a number of Phillips screws, covered by little white caps. Remove these fasteners and you gain access to all the hidden places!

Yesterday, with the weather still crappy, we hid inside for most of the day. As the charger for my camera batteries has gone missing, I was motivated to tear through our storage areas and look in all the unlikely places that it could be (I have already checked the likely places a dozen times). Each time we get down inside the huge under-berth storage lockers, we open up the inspection ports to the aft chambers to check them as occasionally a bit of water finds its way in there. As we inspected these chambers shortly after we launched and cleaned up the tiny bit that was in there, I was really surprised to find, what I would consider, a LOT of water in the starboard compartment! This definitely required some investigation.

My hypothesis was that the source of the water was the transom shower but I couldn’t yet see the back of the unit. No worries… after removing 5 simple screws we had access, not only to the back of the shower, but also to the starboard steering quadrant(?) and the mechanical portion of the autopilot which is attached to it. This area lies directly above the previously wet chamber (we cleaned it up) and it also had at least an inch of water in a portion of it. Good thing we had sponges and rags handy! 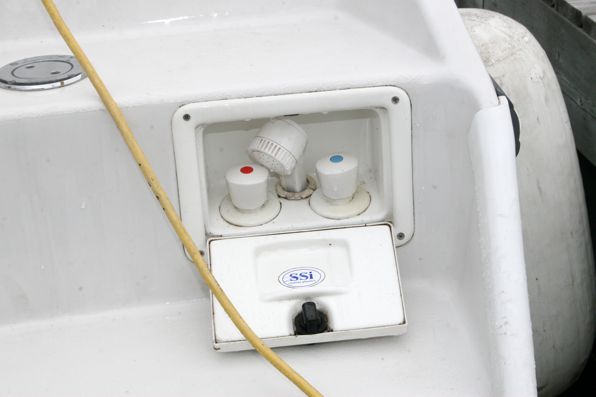 Yes, we have a hot and cold fresh water shower on the transom! Tiny luxuries.

Why so much water? Again, my assumption had to do with the shower area. We had just, the other day, washed the boat and Rebecca spent a fair amount of time at the transom with the hose. I think that was the source. But even though the last thing I wanted to do in the cold weather was to get out the hose and start playing around with water, I did it anyway. With Rebecca down below watching for leaks I turned the hose on the outside of the starboard transom. The only area that appeared to leak was the shower, and although not dramatic, there are stains (note the black marks below the shower box in the photo below) that indicate it has leaked for some time. 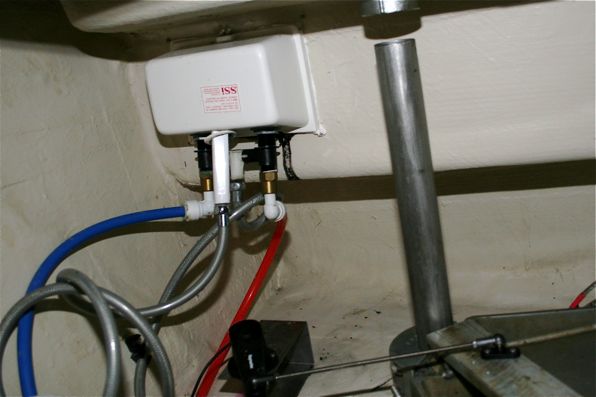 Like our previous leak this one should be easy enough to fix. When we actually get some seasonal temperatures I’ll take a stab at sealing them up.

My most successful New Year’s resolution ever!