We haven’t had a lot of luck with the passage between Dominica and Martinique. Rather than risk 10 hours of bashing into the wind, last year we ended up doing a 180 degree turn to head back to port. This time around, buoyed by reports of moderate sea conditions, we, along with our friends on Oceana and Nahanni River, cast off our mooring lines at 6:00 AM yesterday and set sail south. What followed was anything but a calm sail, as the video at the bottom of this post attempts to illustrate.

Even though the image above shows that our destination is St. Pierre, we all opted to continue on further south to Fort de France, an anchorage which we were confident would be calm.

You’ll note in the radar image below that while some rain is shown by Dominica, points south of there appear clear. We heard that even a certain famed weather guru failed to see the squalls which would lord over the seas yesterday. Were we in any real danger? In our minds, no. We sailed conservatively with much reduced sail area. The seas were large and confused though and the frequent downpours reduced visibility so much that we often lost sight of our friends. In other words, not too much fun. 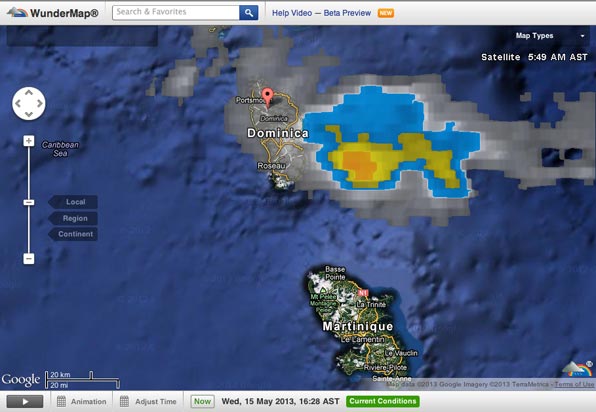 Do you see any precipitation south of Dominica?

If you have the bandwidth and a few spare moments, check out the video to get a small taste of what the ride was like. Bear in mind though that photos and video always fail to convey what the actual sea state is like. To really get a feel for it, you’d have to come along for the ride and I’m pretty sure that most would not enjoy it. We sure didn’t!