To maximize fun be ready to change your plans!

It’s often stated that a sailor’s plans are written in the sand at low tide, meaning that all plans are subject to change. While a cyclist may not be at the mercy of Mother Nature in quite the same way as a sailor, we’ve learned that keeping our plans flexible is a key to happiness. For example, just minutes before saying goodbye to our friend Alex in Oaxaca, he looked over our route and pointed out that a road which, to me, looked like a busy thoroughfare actually had a bike path running down the center of it. We took his advice to follow that road and it turned out to be fantastic, letting us exit the city on a flower and tree-lined bike lane instead of battling with morning rush-hour traffic. 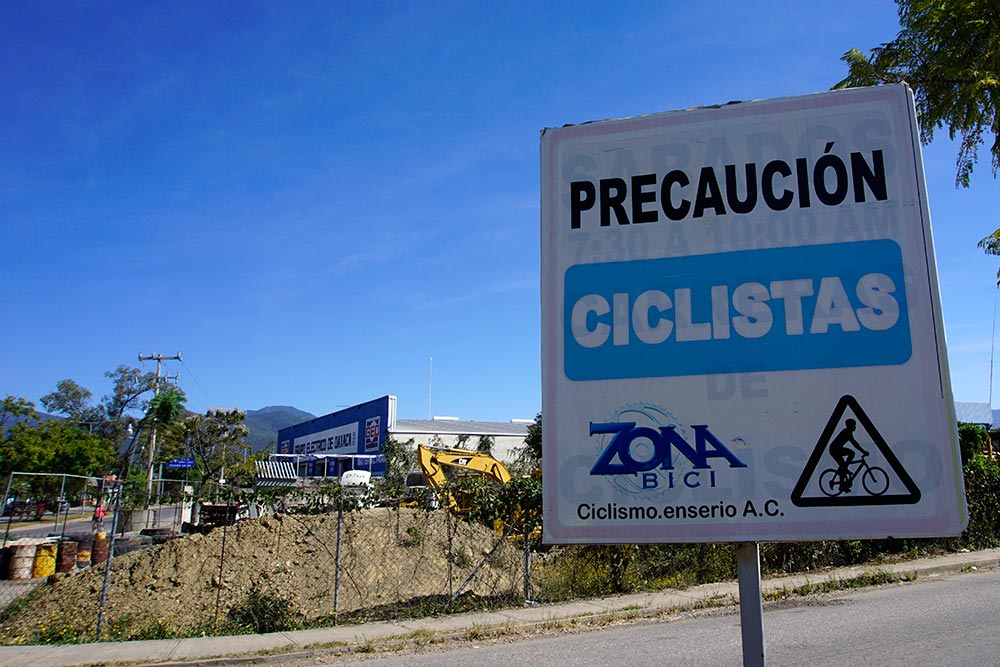 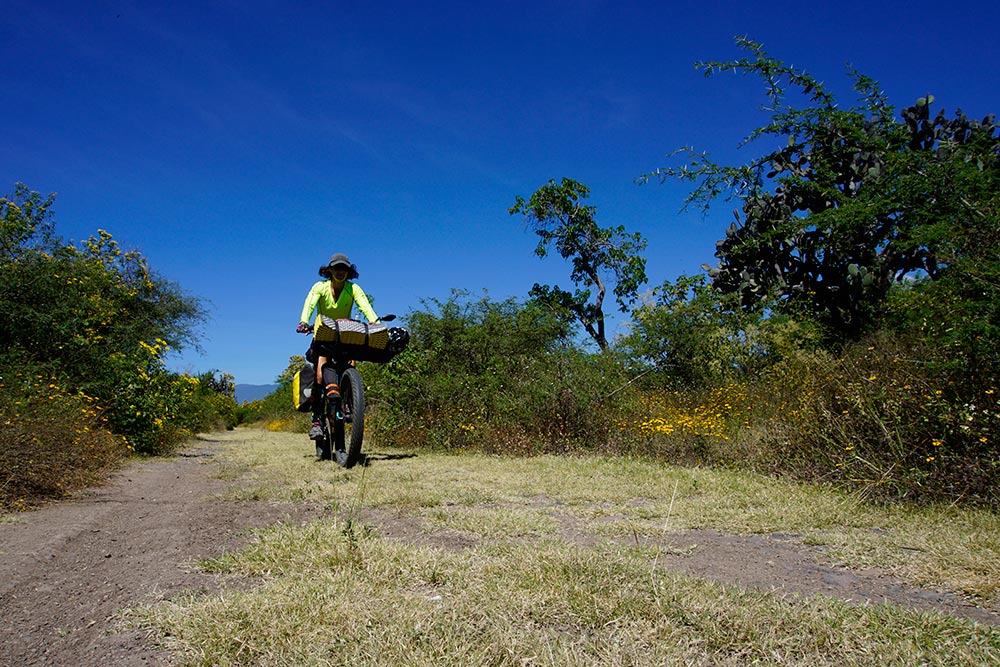 Just the kind of riding that we love.

Once we left the bike path, we rode the remainder of the day on dirt back roads, the exact type of riding that we like the best. It might seem like finding dirt roads to ride on would be easy but the challenge is that most are not actually mapped. Yes, you can see them on satellite imagery but it’s often difficult to plot a route onto them. 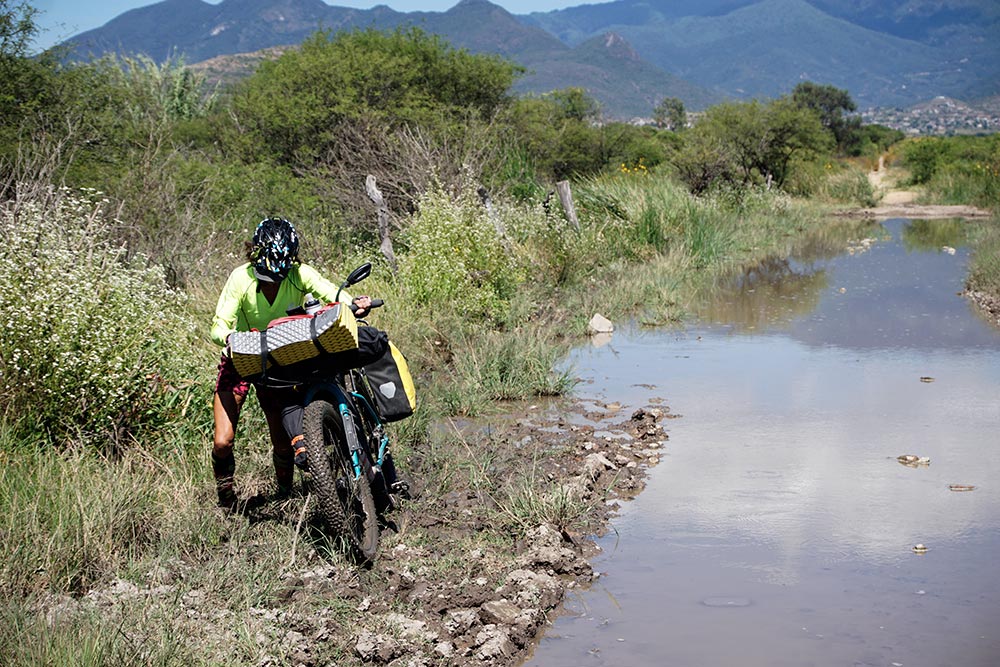 The road less traveled is not without obstacles. 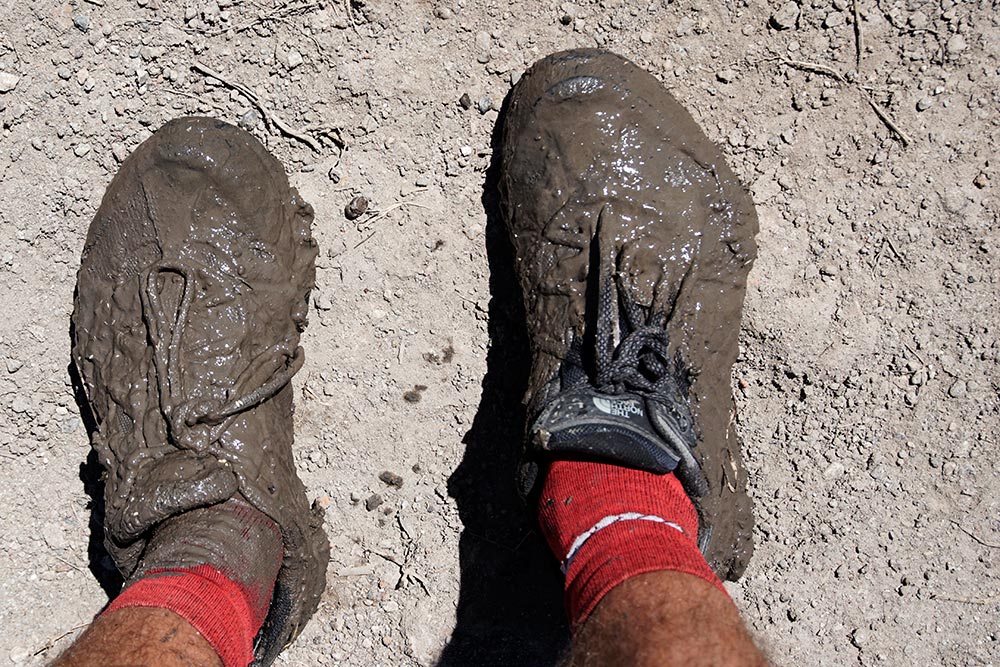 Nothing a bit of water can’t fix.

Speaking of mapping, for the past few days I have been testing out a new (to us) iPhone app called MapOut. Another cyclist on Facebook had recommended it and I forked over the 5 bucks to check it out. Right out of the gate, I love the following three things about it: 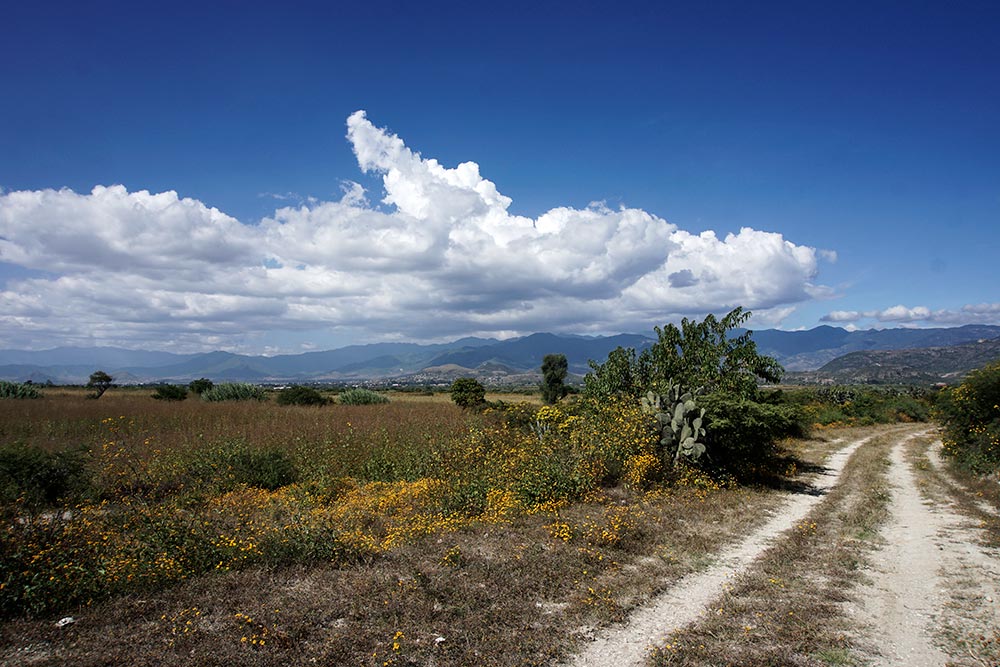 No traffic problems on the back roads. 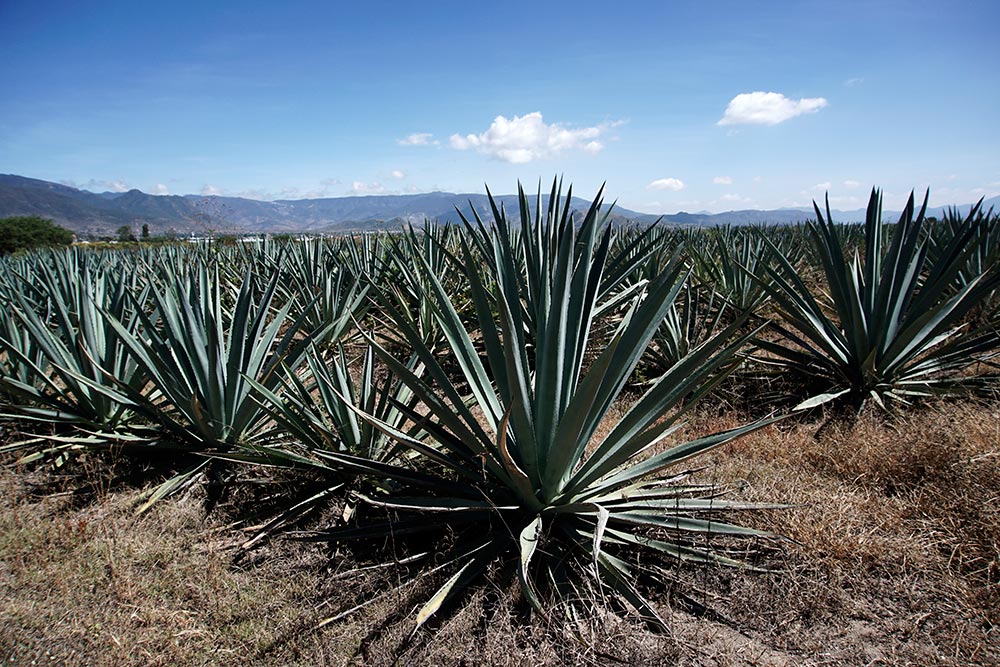 There were Maguey fields everywhere. 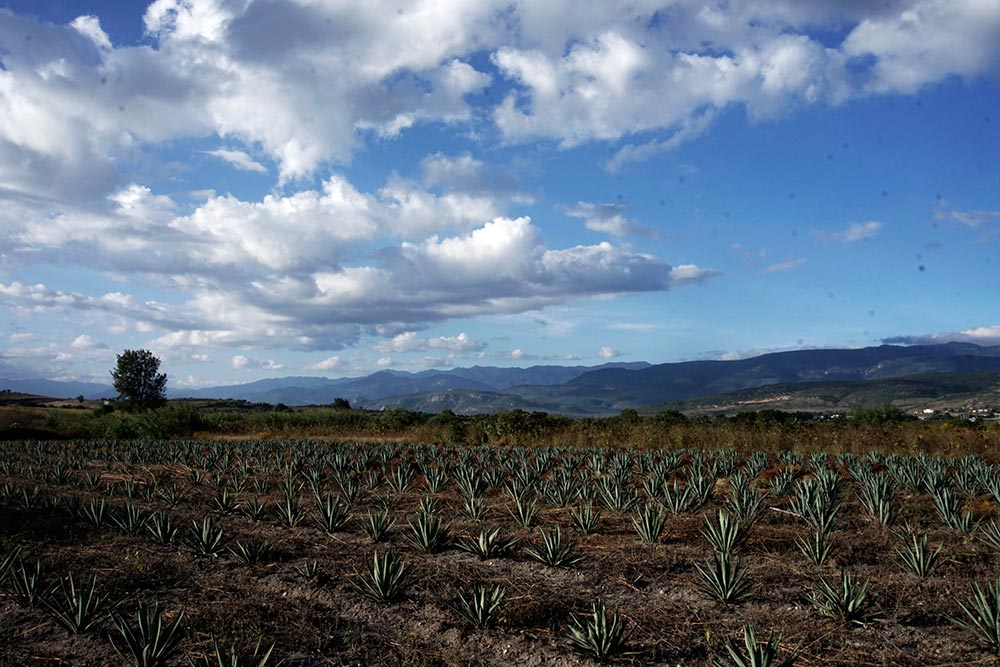 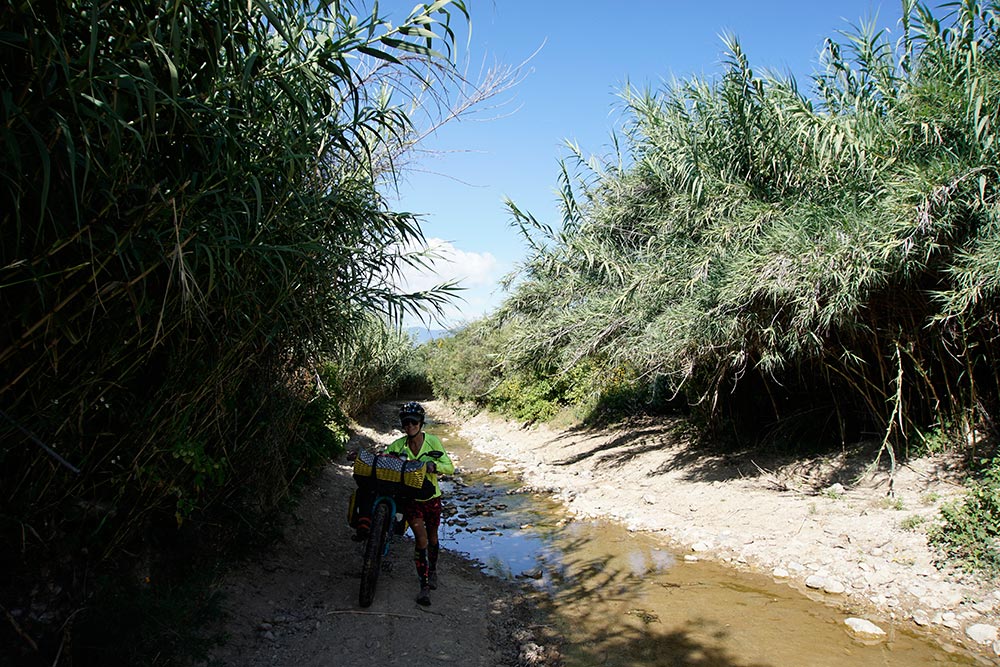 The rainy season appears to be over but the streams remain.

The second day out of Oaxaca had us riding on a quiet paved road with fields of Maguey often bordering it. Maguey, also known as Agave, is used to make Mescal, a beverage obviously important to the area (I may have had a taste or two in Oaxaca). We also ended up completing thousands of feet of climbing that day in spite of the fact that we had a massive descent, losing 3000′ in elevation. Crazy, right? 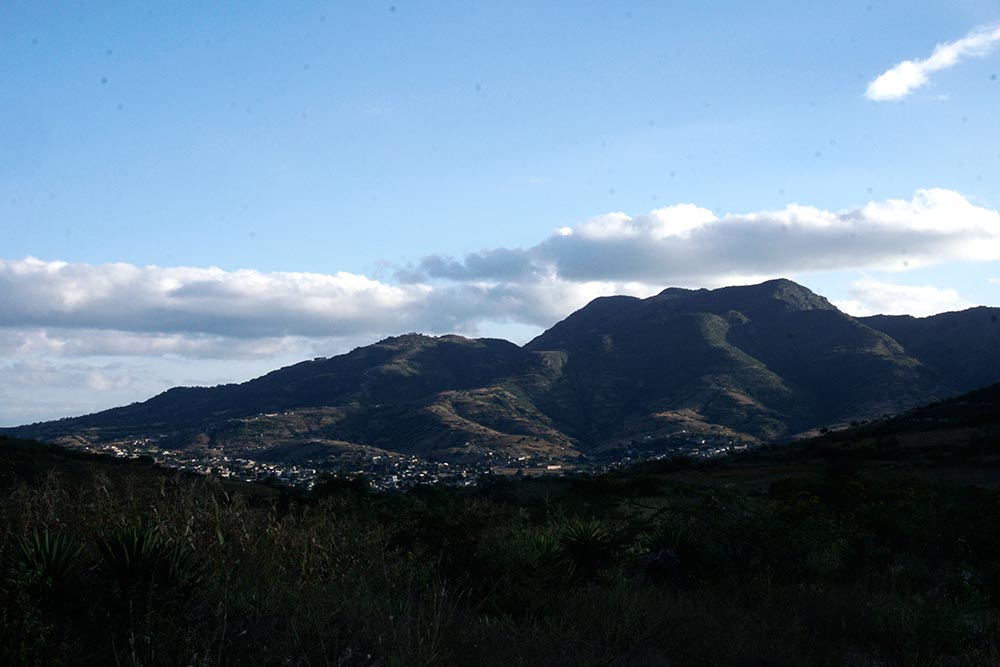 Approaching a town just as the sun dropped below the mountains.

At the end of the day, we arrived at this town with nowhere arranged to stay. We stopped and asked a group of guys on a street corner if there was a hotel in the town. They laughed and replied, no, there wasn’t. We then asked if there was a place to camp? One of them responded (in Spanish), “I have a house but there are no lights.” And so that’s where we ended up staying. Mexican hospitality is hard to beat! 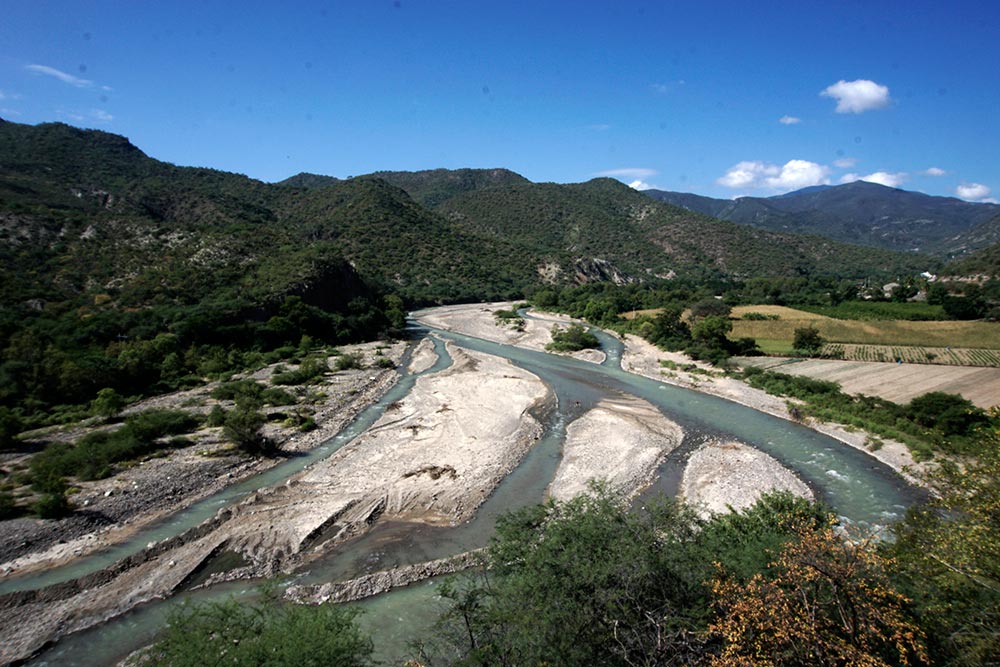 I’m glad we didn’t have to wade across this river. 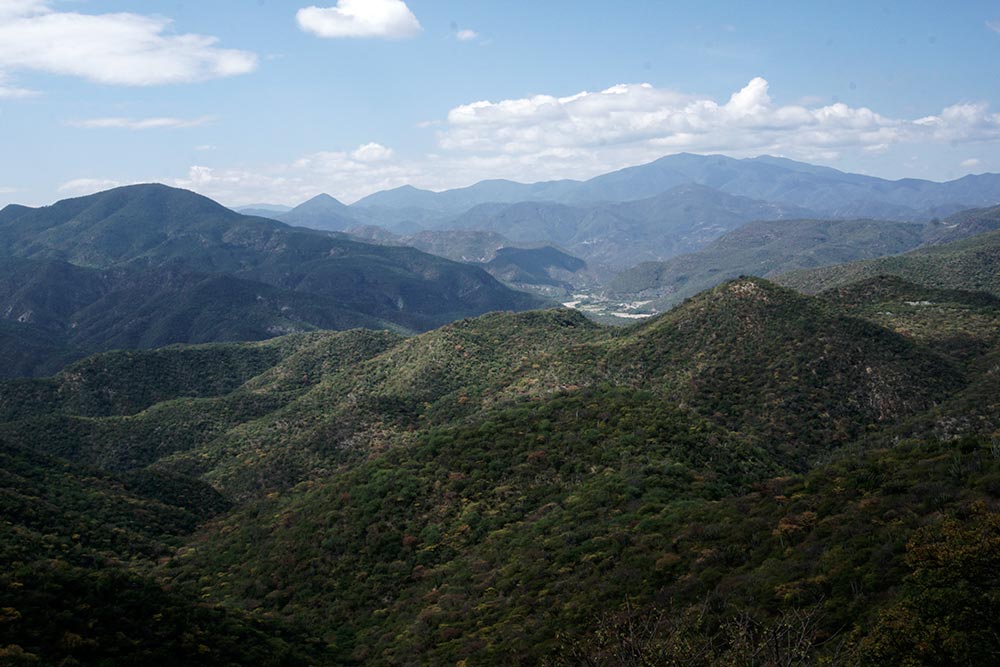 Our legs were getting a workout climbing these mountains. 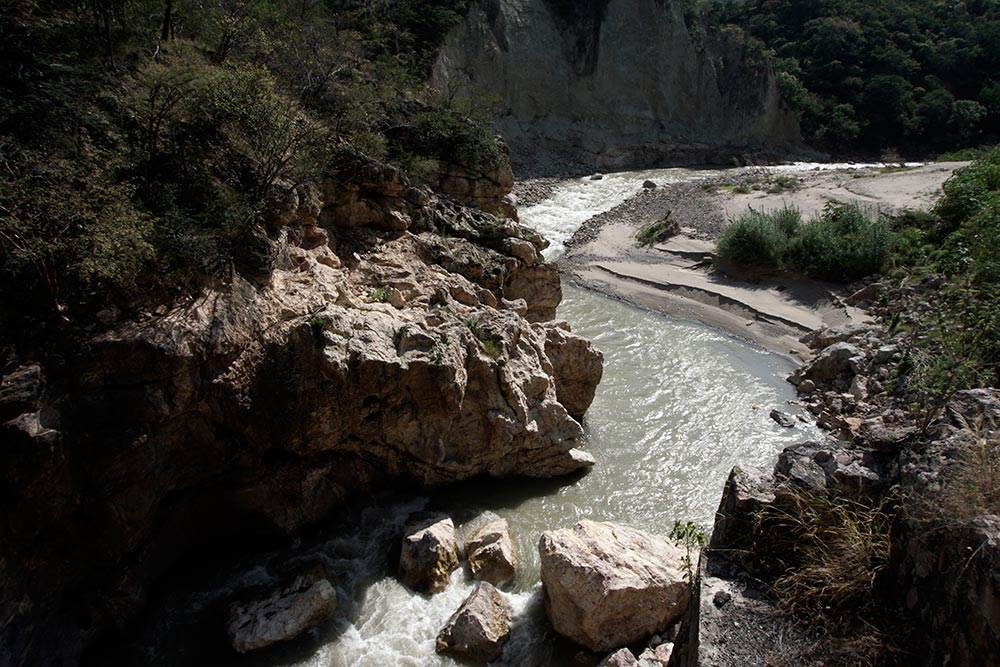 Happy there was a bridge across this one! 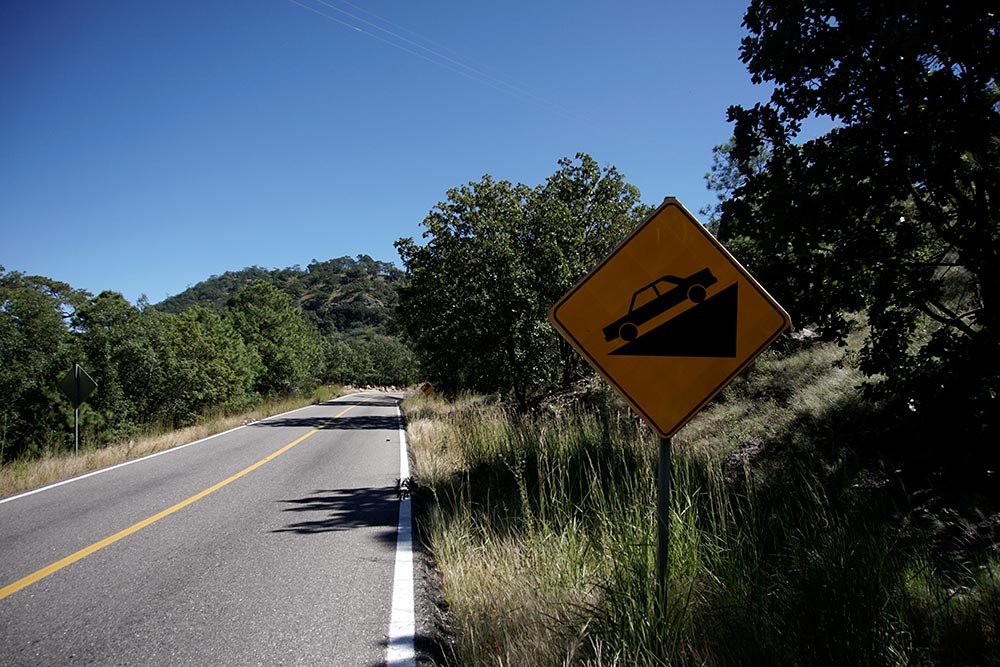 We like to see this sign at the TOP of a pass but not in the middle of climbing up to one.

True to the “plans made in the sand at low tide” theme, we once again ended up altering our route at the last minute on the third day. While in Oaxaca, we were put in contact with another cyclist heading south named Cyril. Rebecca and Cyril had been keeping in touch and even though we were following different routes, we thought that we might be able to meet up in Tehuantepec. As it turned out though, we were about a day ahead of Cyril so rather than head into the city, we decided to take some other back roads to bypass it, hoping to meet up with him at some other point in the future. As it turned out, our routing was awesome and we had some incredible riding that day. 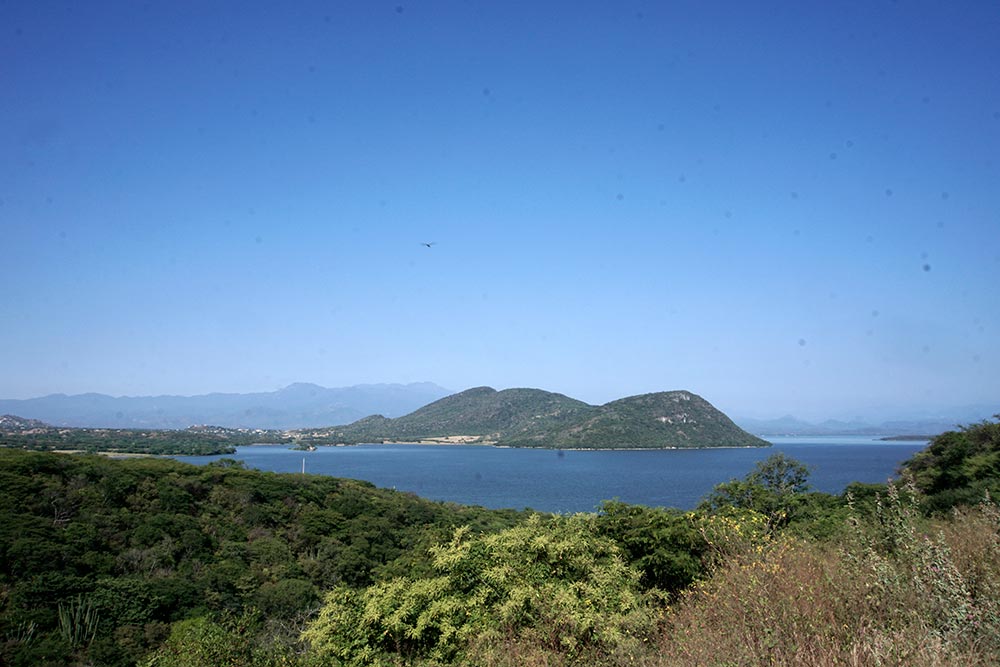 We never know what we’ll find around the next corner. 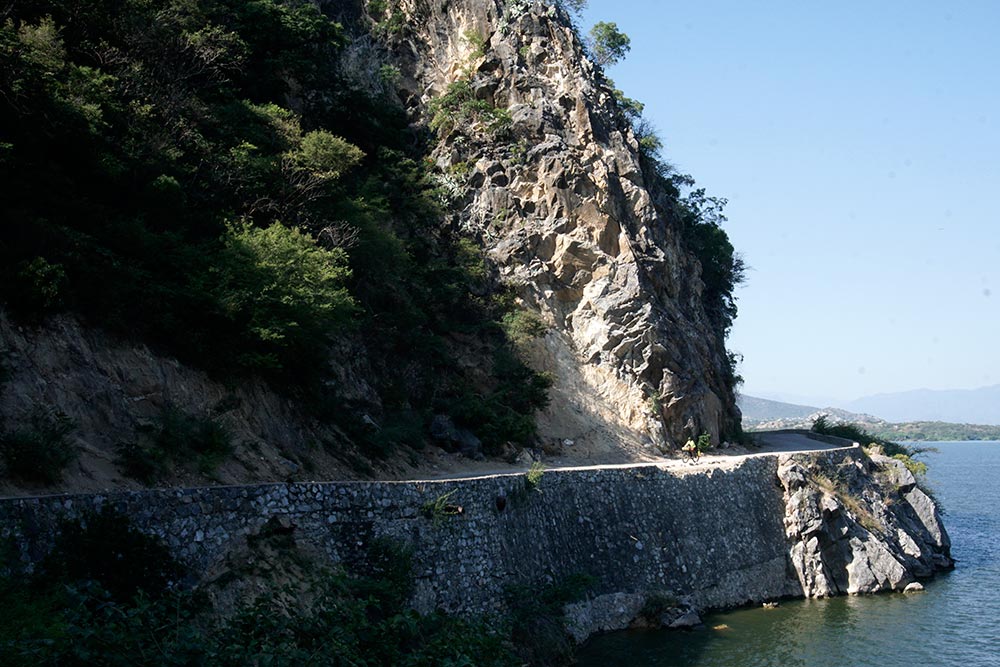 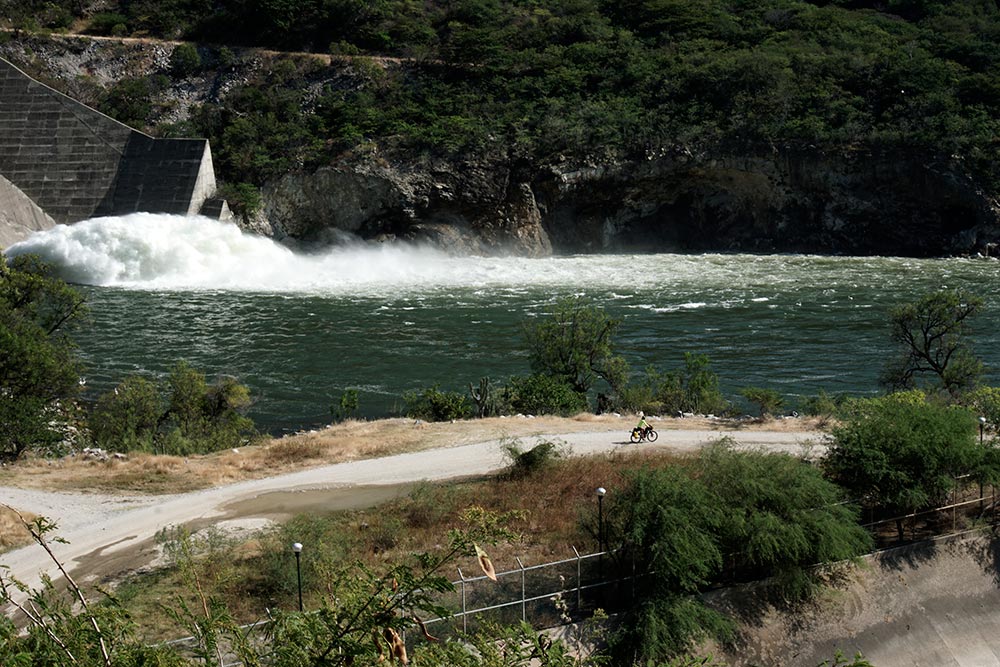 Spilling a lot of water from the reservoir. 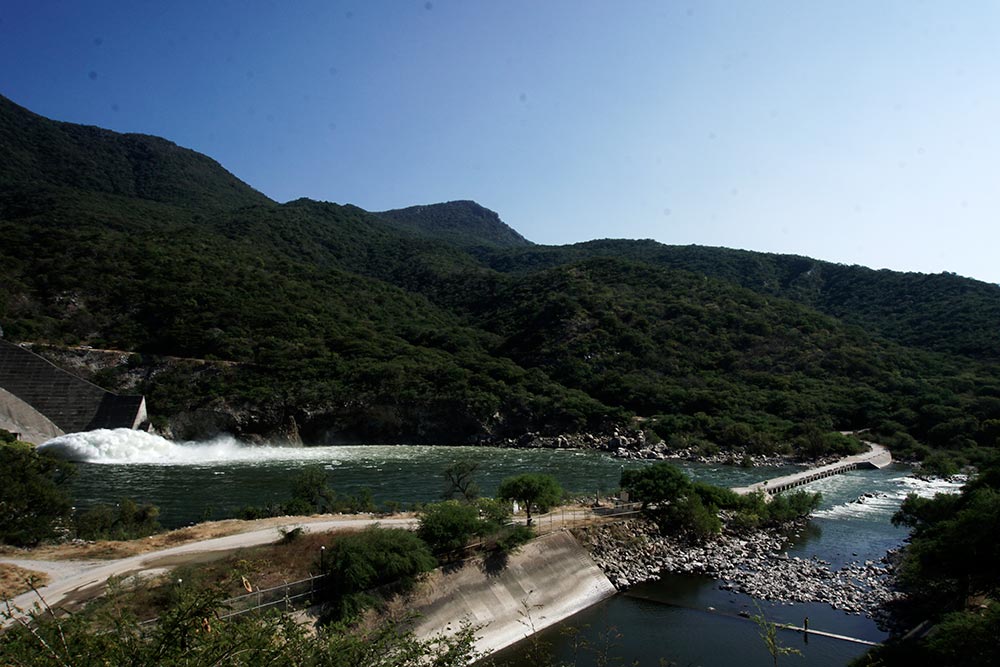 Rebecca crossing the bridge, way down there.

The next day we, unfortunately, had the first bit of unpleasant riding that we’ve experienced in some time. The highway we found ourselves on was narrow, busy, and had a wicked crosswind. How windy was this area? Let’s just say that a Google search netted an article that says it’s one of the windiest spots in the world. I’m just happy that the wind was blowing us away from the traffic and not into it! 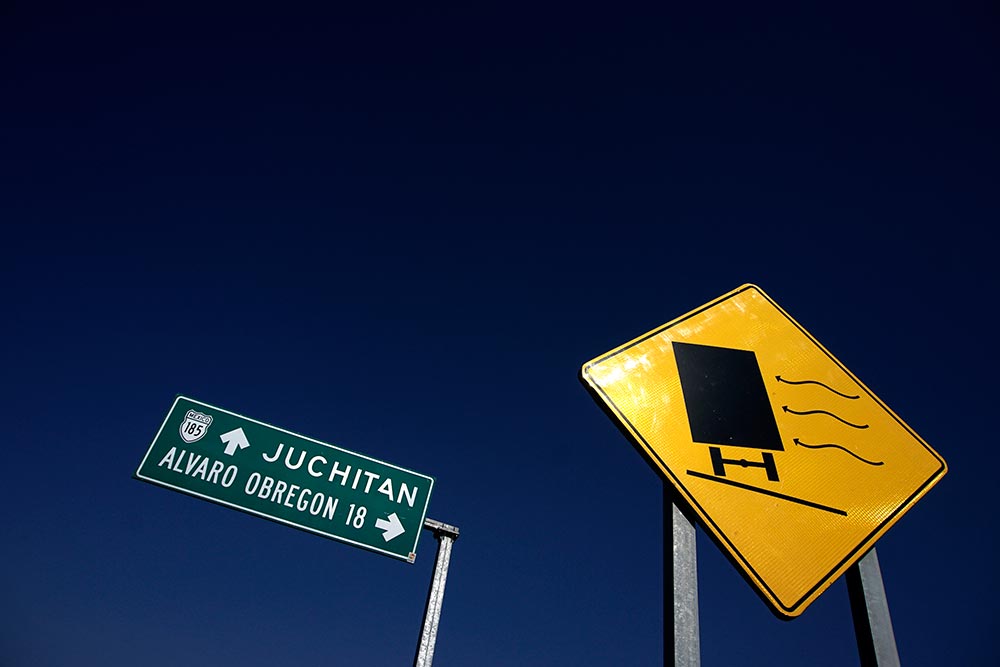 Was it windy? There were signs like this on the highway every 100 meters! 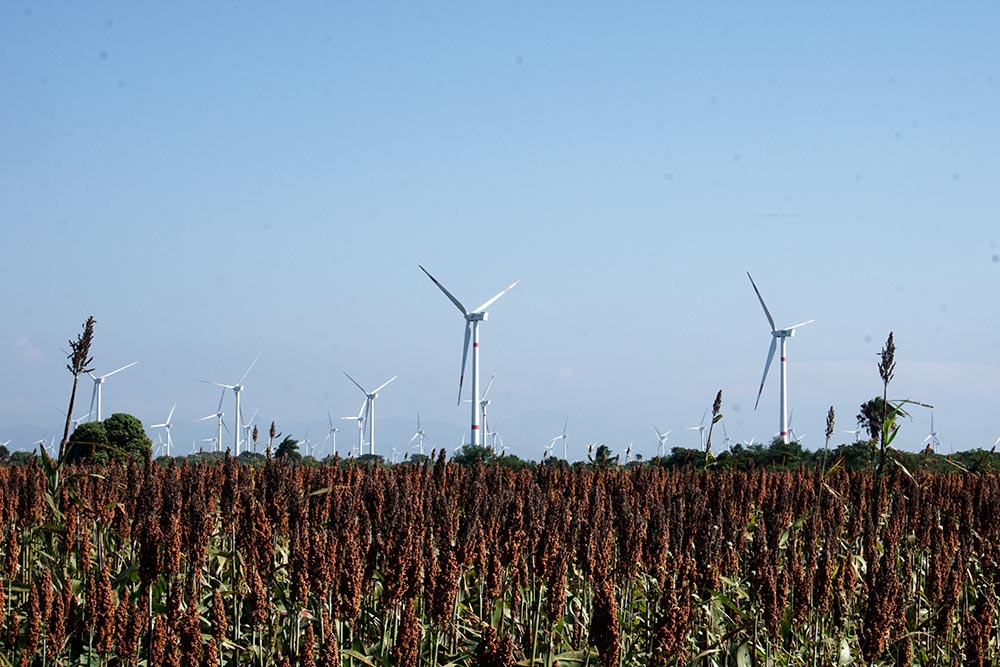 Having nothing but time on my hands, while riding this stretch I mentally debated which is more frustrating to a cyclist: a long uphill climb or a strong headwind. While others may feel differently, I’d have to cast my vote for the headwind. Riding with a strong breeze opposing your motion feels as if you’re climbing an invisible mountain, one where you can’t see the top and may very well be endless. Such are the musings of a calorie-deprived cyclist. 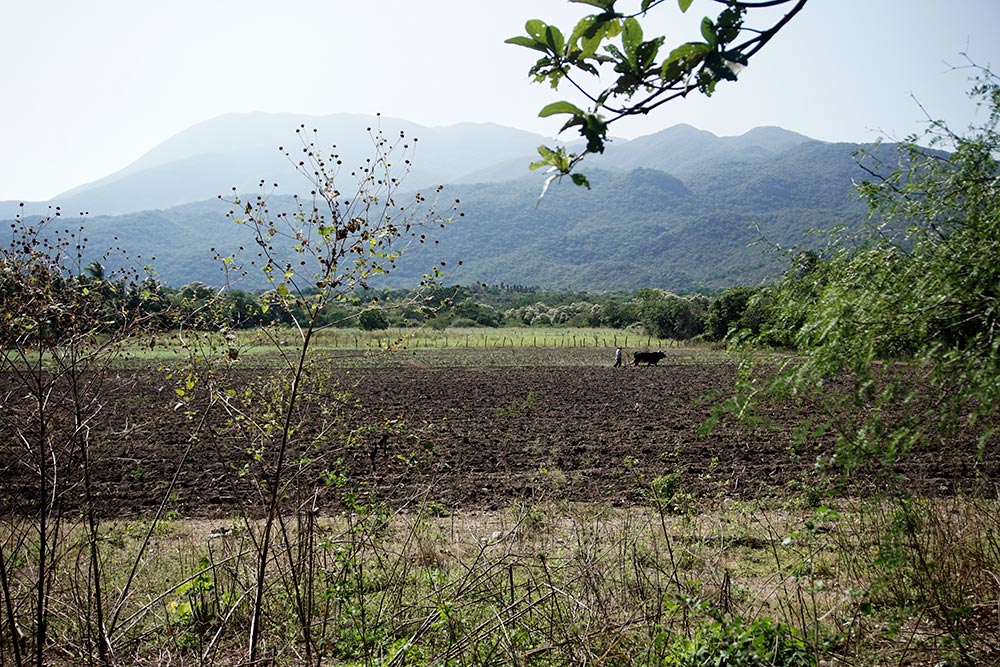 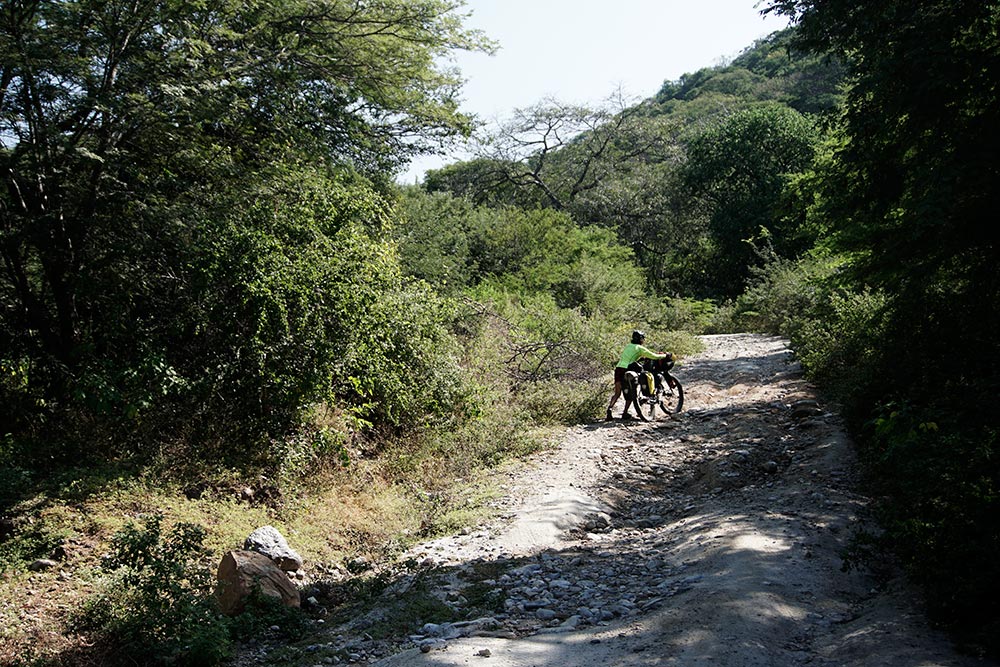 I was right behind her, pushing up this rocky hill. 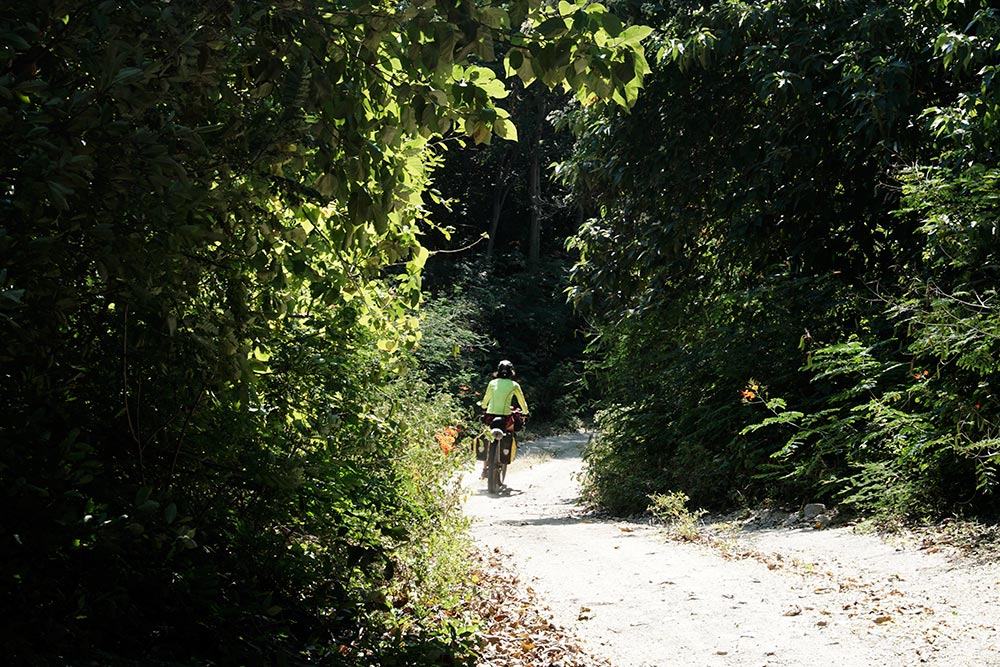 Love the quiet back roads. 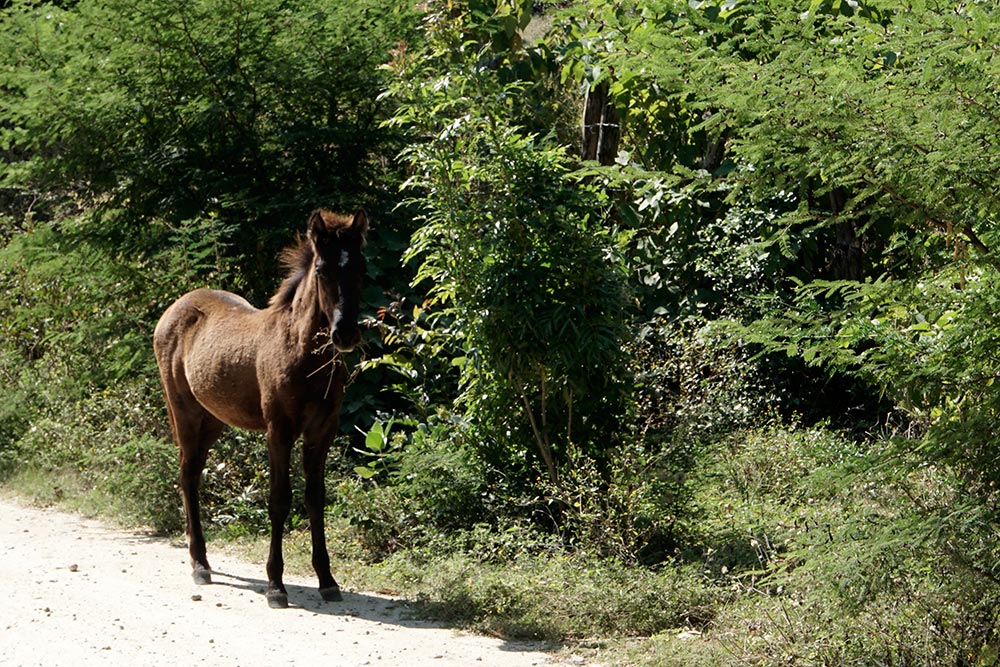 We inadvertently separated this foal (yearling?) from its momma. We stopped so that they could get back together.

At the end of the day, we found ourselves in Juchitan, a city that was close to the epicenter of the September 7th earthquake which caused so much devastation in Chiapas and Oaxaca. As we rode through the town, and the nearby communities the following day, evidence of the quake’s destruction was still front and center. Many of the streets in the smaller communities were still lined with rubble, and multiple buildings could be seen either completely collapsed, or at least partially so. We also saw several tent cities, no doubt put in place to house the displaced citizens. On the bright side, construction was ongoing everywhere. They are rebuilding! 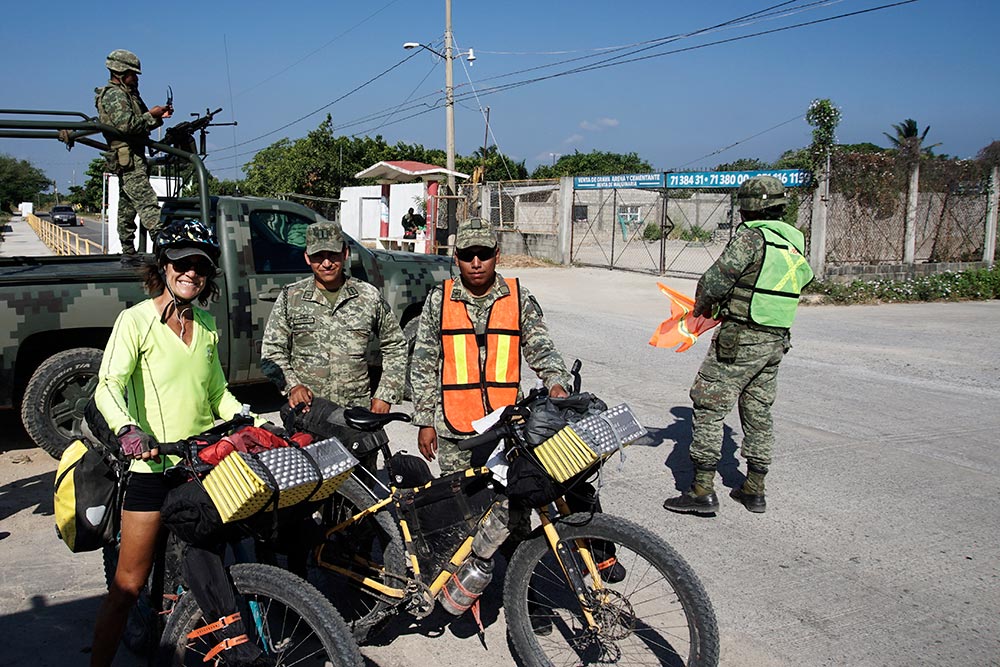 Since arriving in Mexico, we’ve passed through a few of these security checkpoints. Occasionally they check in a couple of our bags, as they did this time. That’s worth a photo, right? 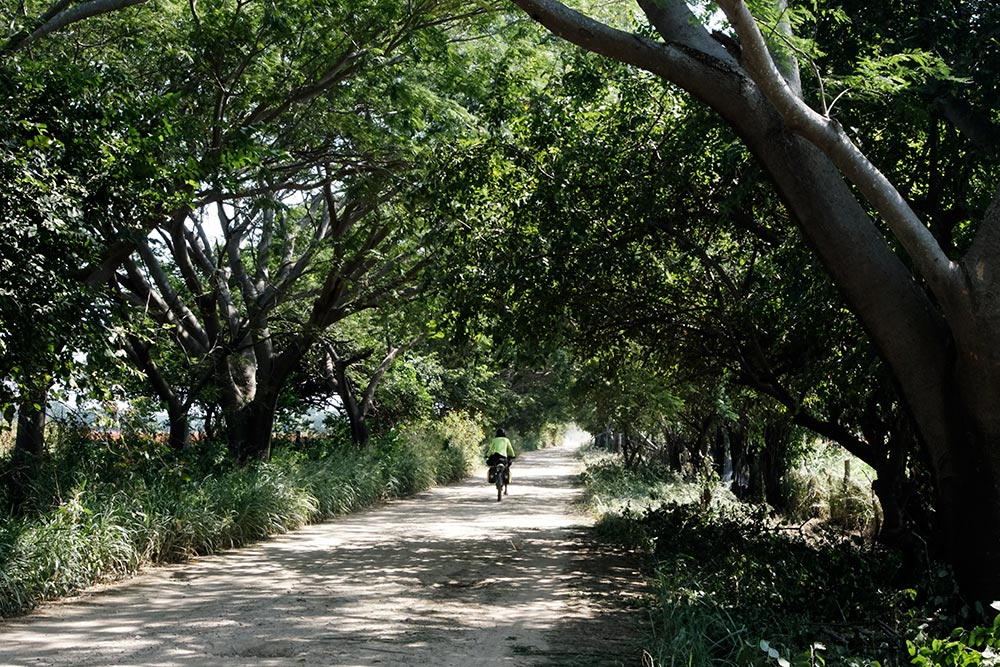 From Juchitan, we once again were able to head south almost exclusively on dirt back roads. It’s been two and a half months since we’ve been anywhere close to sea level but that’s pretty much where we were riding that day, dealing with all the heat and humidity that comes along with the lower elevation. As is typical, we had no idea where we’d be spending the night. About mid-afternoon, we left San Francisco Del Mar to continue on to its neighbor, Ixhuatan, hoping that the hotel listed on Google was still in operation (or still standing). When we rounded the corner to find a wide river separating us from our planned destination, I could do nothing but burst out laughing.

As it turns out, the locals had an effective way of dealing with the river. Well-trained horses pulling carts traversed the river, back and forth, ferrying people and goods from bank to bank. Was our trip across sketchy? You bet! We were holding onto our bikes dearly, working with great effort to stop them from sliding off the back of the cart into the water. The cost for the trip? Only 10 pesos, about 70 cents US! 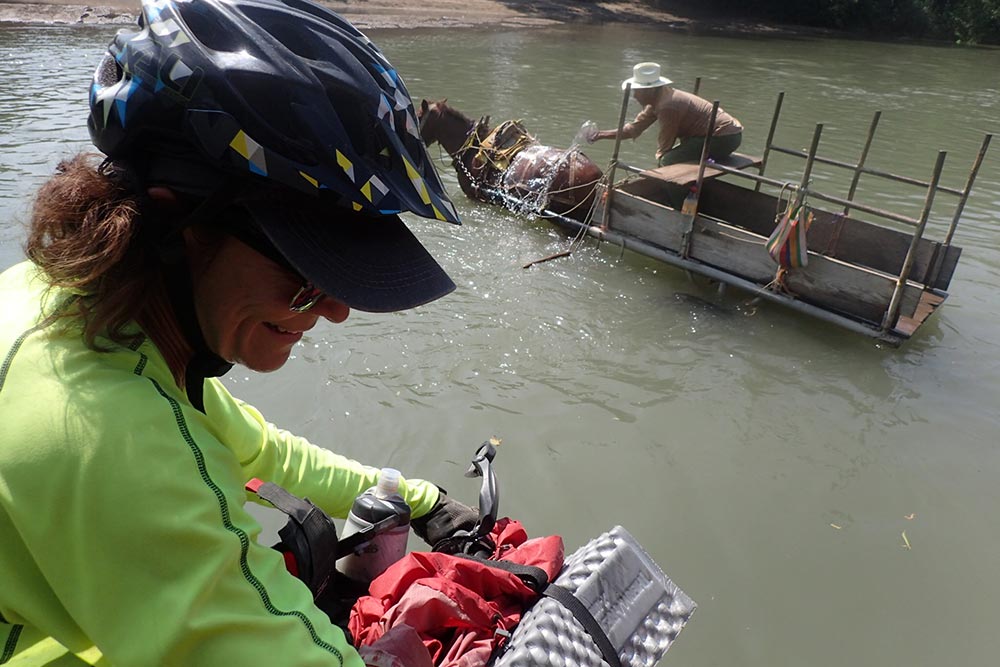 Does Rebecca look worried? Note how deep the water is! 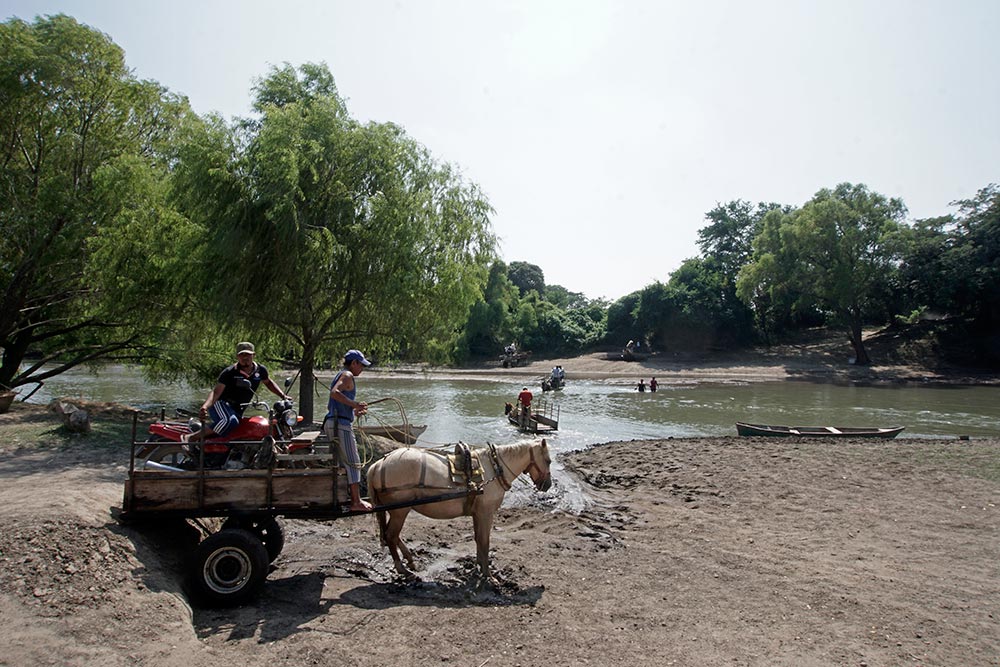 It was pretty obvious that Ixhuatan was also hit hard by the earthquake as rubble was abundant. The hotel we hoped to stay at was still standing though but unfortunately, when we first went there, it was locked. We stopped at a nearby street corner, purchased an ice tea and inquired about its operational status. We were told that yes, it was open, but that the innkeeper had gone out to get something to eat. He would be back later, we were assured. 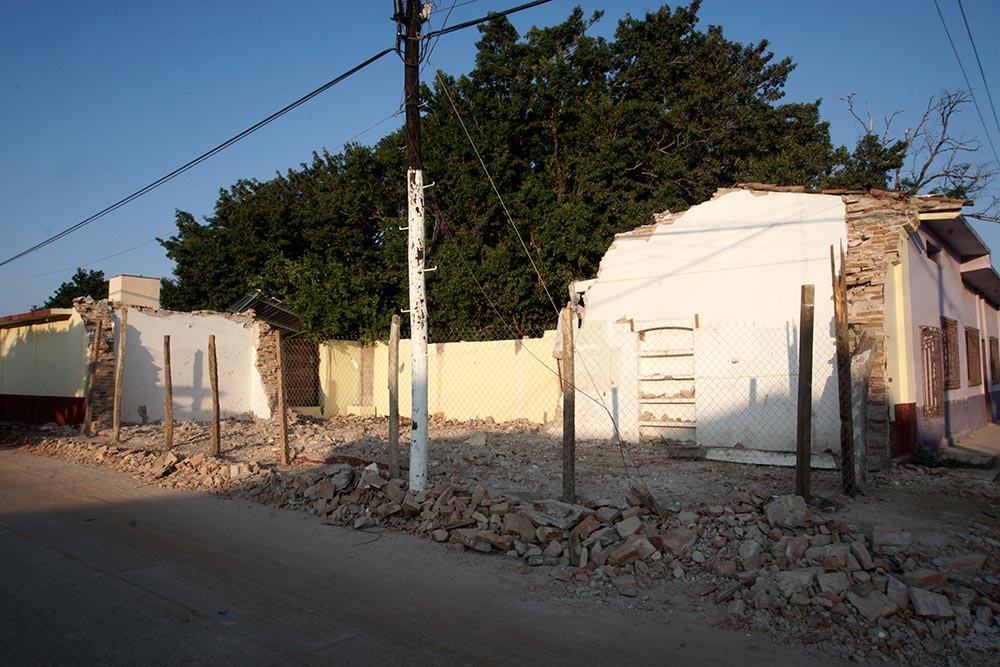 Evidence of the recent earthquake was everywhere.

As we debated whether or not to stay there and wait or to ride on another 25 miles to the next town, a proposition neither of us was too keen about, the innkeeper did return. The room that he set us up with was small and rustic, but cheap. No complaints.

After 5 days in the saddle, Rebecca and I decided to make today a short one. We knocked off the 40 km to San Pedro Tapanatepec by lunchtime and found our way to a much nicer hotel, one with AC. No longer in the cool mountains, AC is once again a desirable thing! As tomorrow we have to climb 3000′ back into the mountains of Chiapas, getting a good night’s sleep, and resting my sore butt seems like the prudent thing to do.

As a funny side note, shortly after we checked in to the hotel, and just as Rebecca had jumped into the shower, we received a knock on the door to our room. A hotel employee was there to let me know that we had a visitor named Cyril. Apparently, Cyril had tried to catch us the day before but had ended up stuck on the other side of the river, the carriage drivers having quit for the day. Today, he was apparently about 30 minutes behind us the entire way.

Cyril had plans to continue on up the mountain today but before he did, we invited him into our room to cool off in the AC. He seems like a cool guy. Hopefully, we catch up to him again at some point in the future. Que la vaya bien, Cyril. 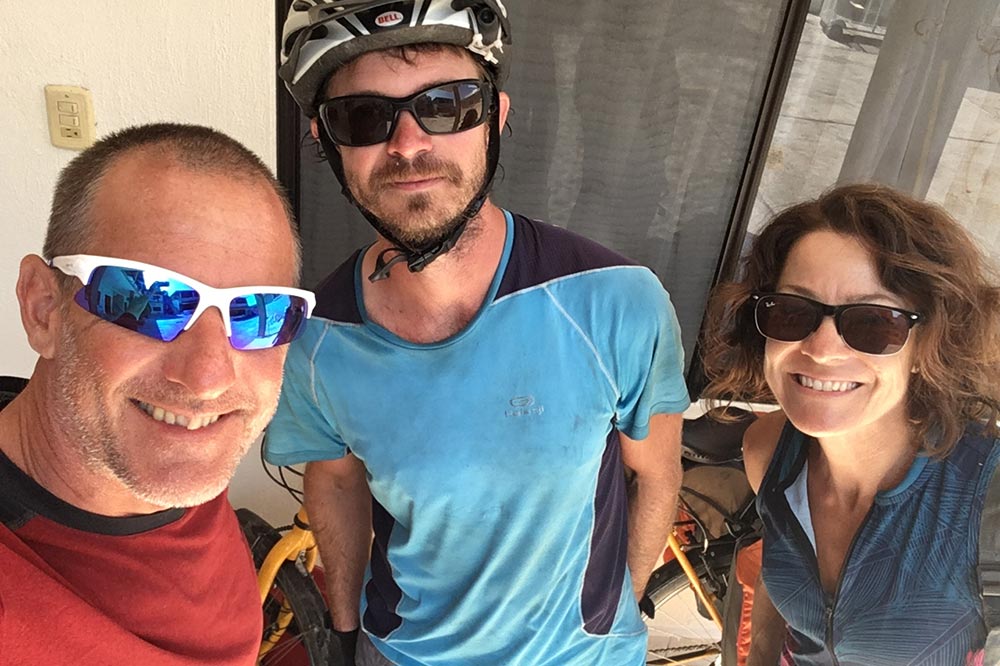 Best of luck, Cyril. Hope to see you again!

A brief but entertaining history of cycling