Climbing the invisible mountain, and real ones too!

I mentioned in our last post that riding into a headwind was like climbing an invisible mountain. During our last few days riding from Tapanatepec to San Cristóbal, we experienced that in spades. But not only did we have invisible, headwind-induced mountains to climb, we had some real ones to contend with too. In fact, we knocked off our biggest climb to date.

We had a good night’s rest in Tapanatepec but before bedding down for the night, we had what was undoubtedly the best pizza we’ve had so far on our trip. As a teen, I worked in a pizza shop, and later in another restaurant. The pizza we had at Terranova’s was reminiscent of the ones that I would make for myself after hours, loaded with extra cheese and other ingredients. In addition to the food being great, the service rocked too. Once they found out that we were traveling on bikes, the owners shared that they had another touring cyclist pass through their shop, also on his way to Argentina. Very cool. 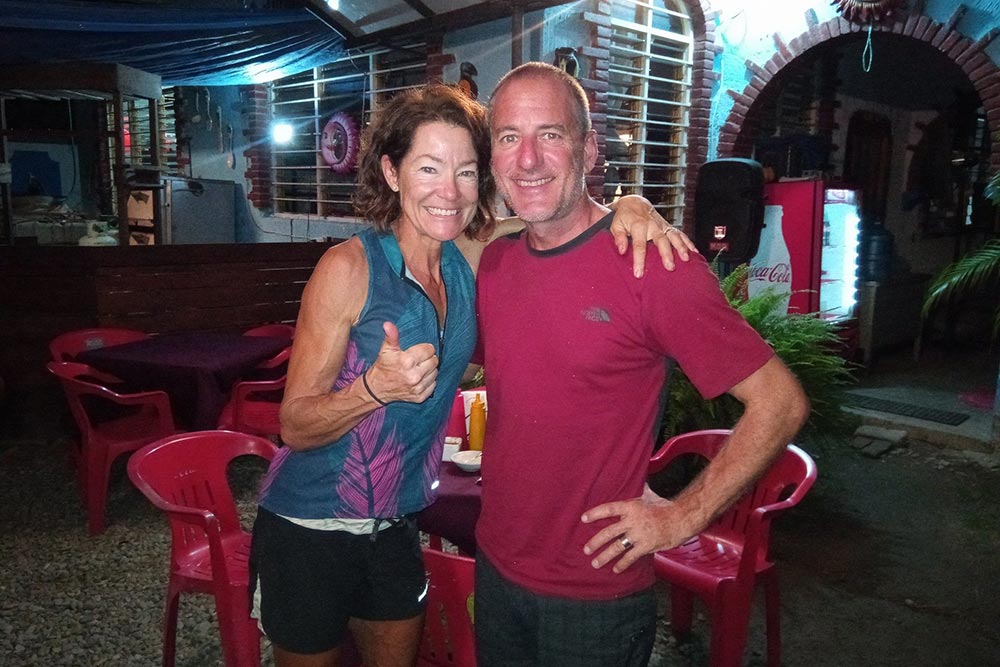 The next day began with a big climb, twisting and turning up a narrow road full of switchbacks. The traffic was reasonably light though and with the sun shining, it made for a pleasant ride. That is until the headwind kicked in. In my last post, I mentioned how the mountains in this area create a Venturi effect, magnifying the wind to sometimes huge velocities. Near the top of our climb, we rounded a corner to be hit with a wind so strong that it literally knocked us off the road. There was even a short stretch where we were completely unable to ride. 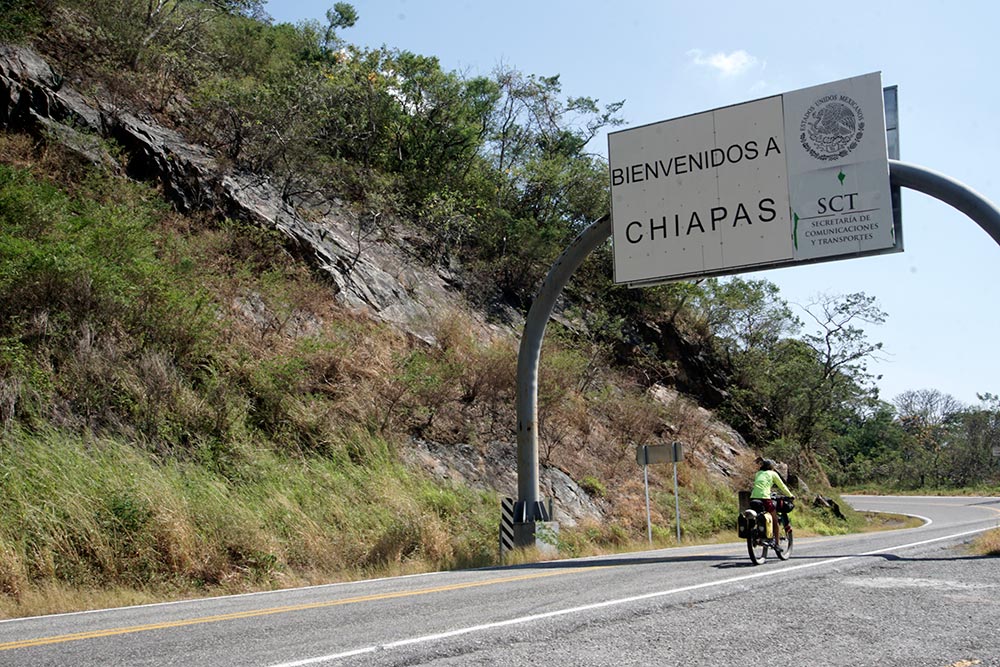 Entering our final state in Mexico. 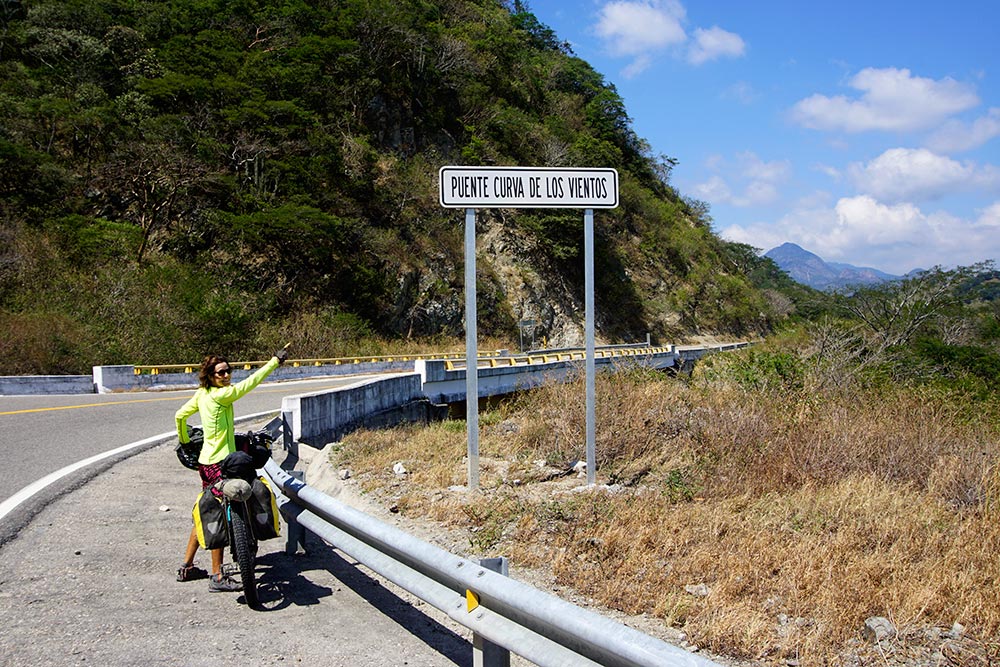 Just before this photo was taken we were blown off the road.

As the road twisted and turned, we would go from having an almost impossible-to-ride-against headwind to a crosswind that continually threatened to push us off the road. We were actually afraid of being blown into the cars passing by us, or vice versa, so stopped whenever one approached. 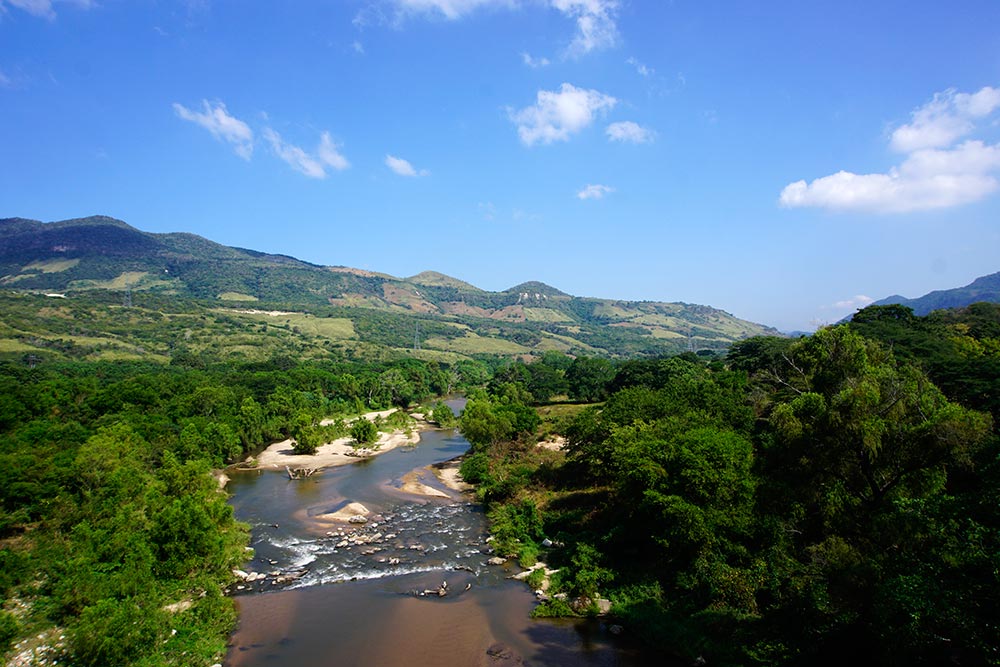 Ultimately, we made it past the curving climb, only to be left with a 20-mile straightaway. You guessed it, a straightaway right into the wind. We might as well have been sailing (sailors will know what I mean).

As further evidence that the wind was crazy strong, we actually had a gentleman in a pickup truck stop to ask us if we wanted a ride to our destination instead of continuing to fight against it. We declined, of course, choosing to save our “hitchhiking” for times when we’re really in need of help, not just uncomfortable. Thanks anyway, Baldemar. 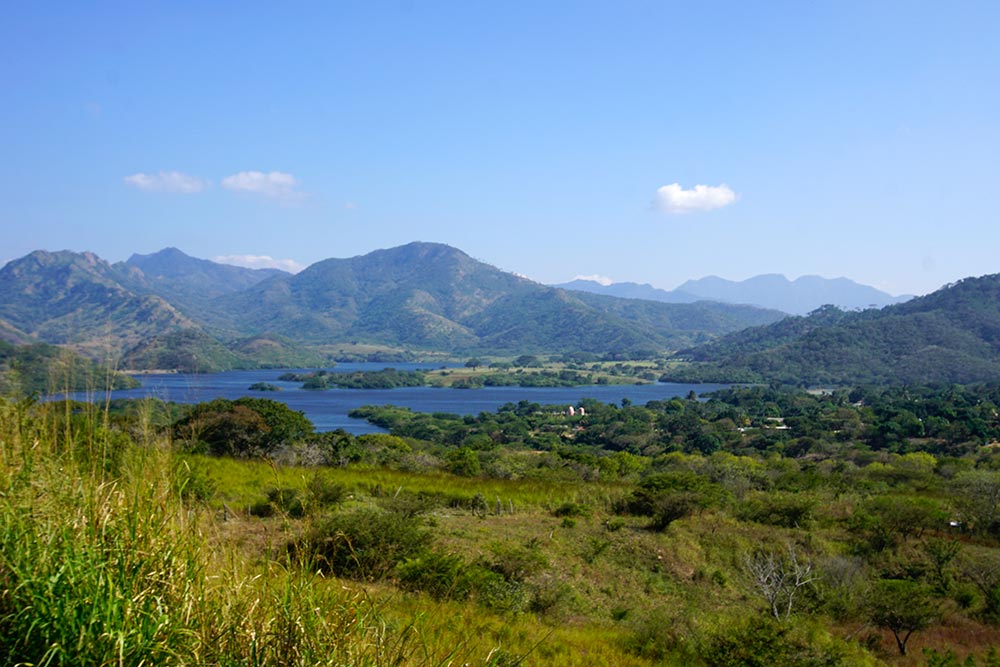 Not far from Cintalapa, our destination for the night, we approached what looked to be an out of control fire. When we actually came upon it, we found that it was simply roadside grass being burned away. Given the strong wind, that seemed completely sketchy. It was barely being tended to and in fact, had actually crossed the road to set the other side on fire too, something I doubt they were counting on.

The ride from Cintalapa to Tuxtla Gutierrez also had plenty of climbing to get out of the way. Unlike the day prior though, the traffic was more than we typically find comfortable. Although we generally choose to ride on the libre (free) highways, mid-way through the morning we took the opportunity to jump on to the toll road with it’s much larger shoulder. 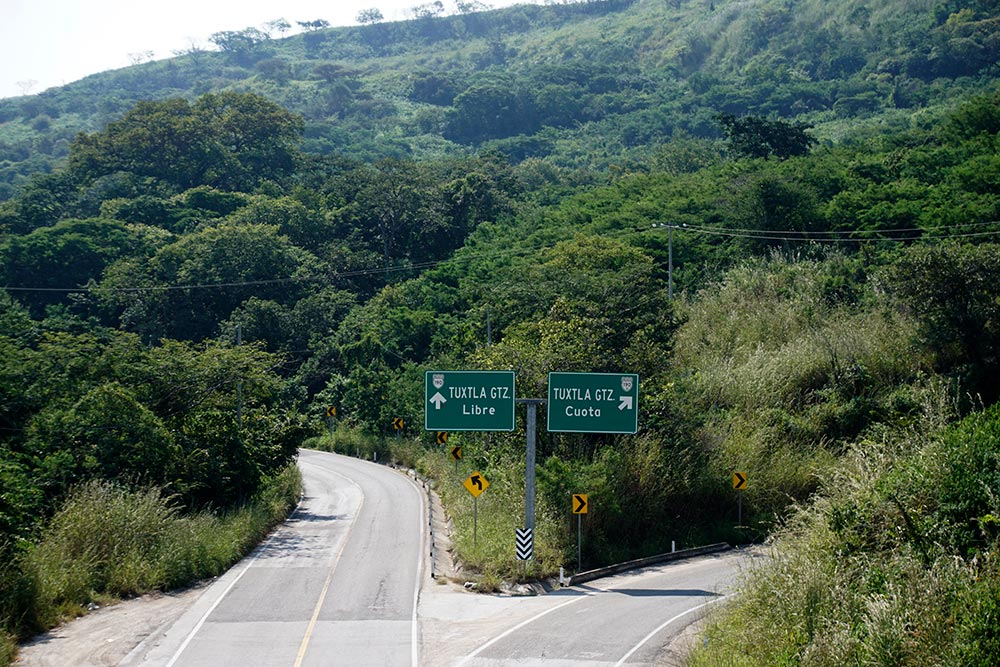 A fork in the road. We chose the toll road this time around. 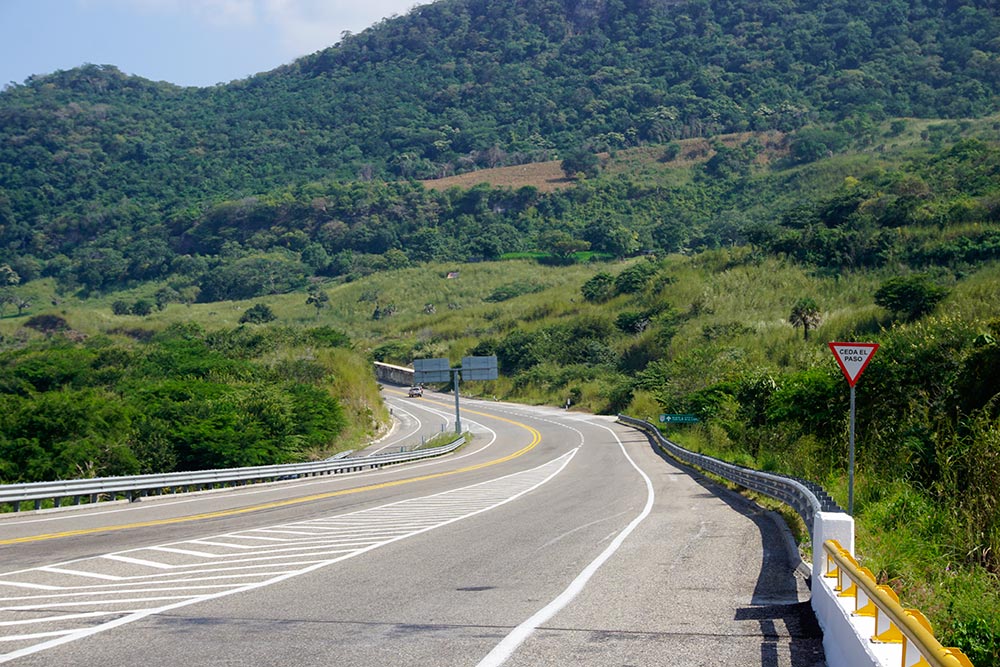 The generous shoulder is great IF the cars don’t use it as another lane!

It took us a full day to ride the 50 miles to Tuxtla. There were plenty of hotels to choose from but we opted for the one that Baldemar, our roadside friend had suggested. It’s funny though, both at this place and the one in Cintalapa, I got into negotiations with the hotel clerks as they wanted to charge more than Google had listed for their rates. I don’t blame the hotels, exactly. Their rates were posted on the walls. It was still amusing though, me trying to argue with them in Spanish. I can only imagine how bad it sounds. I did “win” though, in both situations.

We don’t tend to look too far ahead in our plans and so it was only when we were resting in our hotel room that we fully came to grips with the significant climb that was facing us the following day. We had a 60+km day ahead of us with a 1600m climb, an ascent that is probably about 50% larger than any single climb we had done to date. As luck would have it, Rebecca had been in contact with Martin, the Warmshowers host we planned to stay with in San Cristóbal, and he was in Tuxtla that evening. Knowing what that climb is like, Martin offered to come to the hotel and pick up any bags that we wouldn’t be needing the next day. Helpful? You bet!

The next day, we again opted to take the toll road. The climb, although long and steady, was not particularly tough. The drivers who continually use the shoulder as a lane to drive on were very frustrating to us though. As I’ve mentioned before, I can understand using that lane to create room when other vehicles want to pass. There are many though who use the shoulder to drive on even when there is absolutely no reason to. Yes, a large number of them got flipped off by me as they passed unnecessarily close to us. 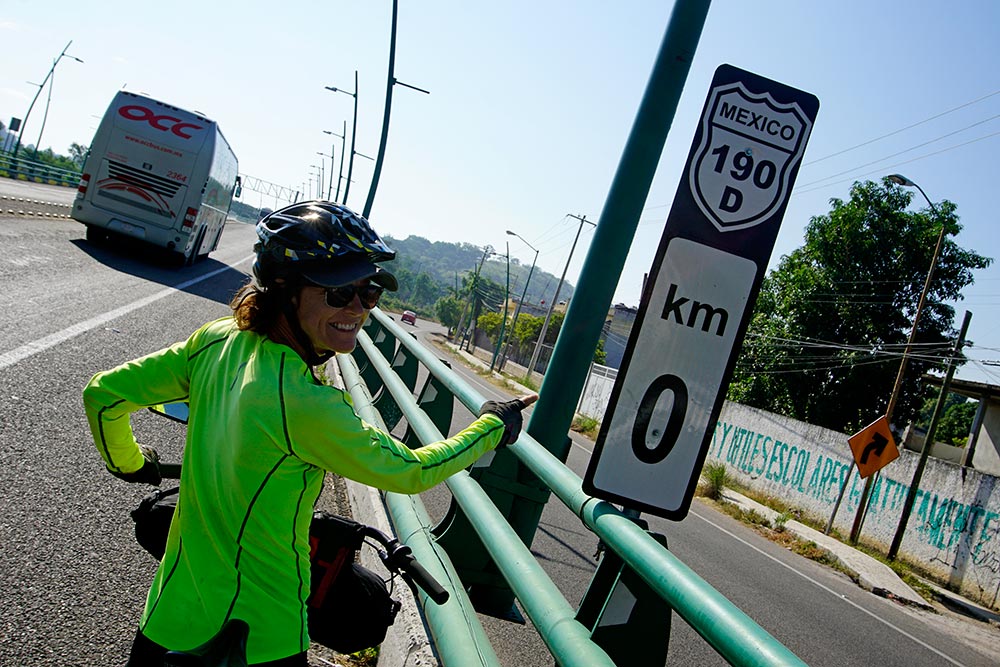 Starting at the beginning. 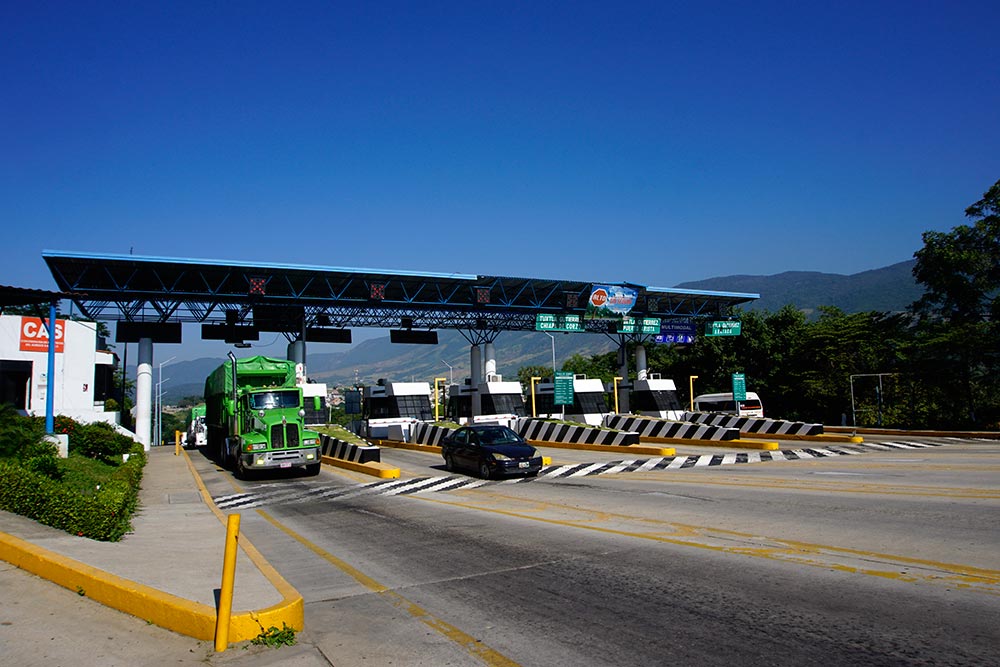 Cyclists do not have to pay but they need to walk their bikes through on the sidewalk, not through the toll booths. 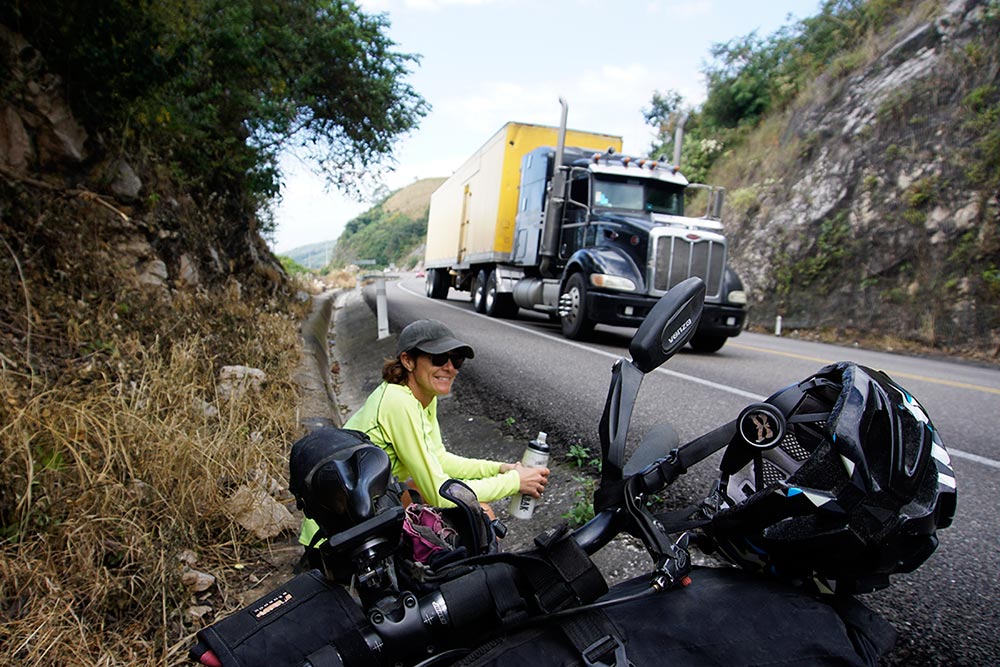 Lunch in a ditch. Not so glamorous.

While climbing towards the top of the pass, both Rebecca and I were listening to podcasts on our iPhones, something that we’ve only recently started to do. One of the ones that I chose to listen to was the Jocko Podcast where he was interviewing Rob Jones, a US Marine veteran who lost both legs in an accident while serving overseas. After recuperating from his injuries, Rob took up rowing and medalled in the Paralympics, took up cycling and then rode his bike across the USA, and now plans to run 31 marathons in 31 days in 31 different cities! How the hell could I possibly complain while listening to a story like that??? 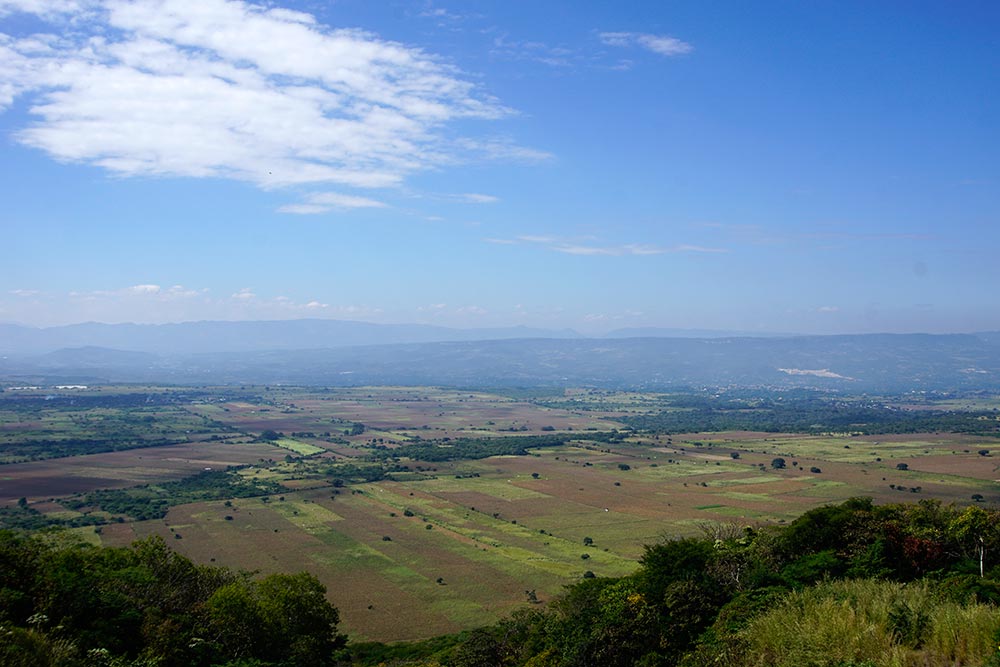 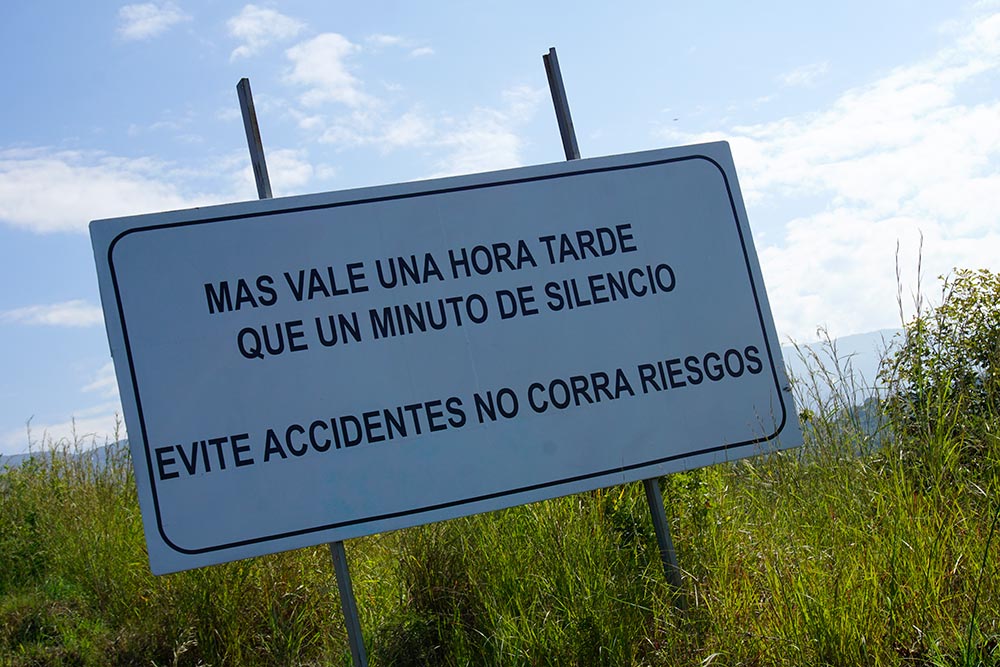 There’s more value in an hour late than a moment of silence! 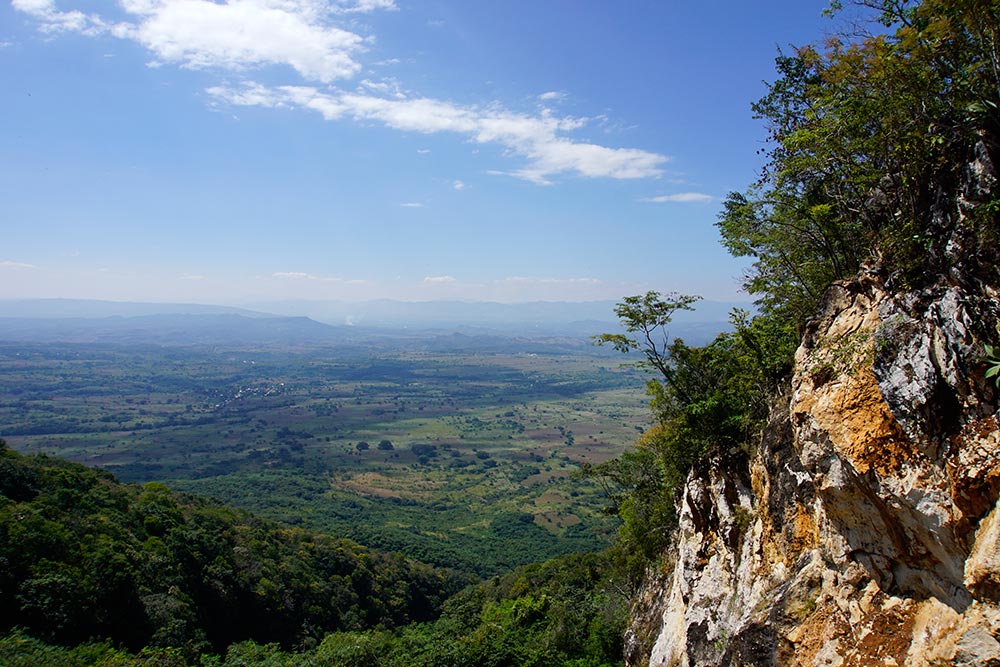 Back at elevation, the warm temperatures that we recently experienced at sea level were once again replaced by the chilly mountain air. Just as the sun was dipping below the mountain tops, we added some layers of clothing for the big descent to San Cristóbal. At 5:00 PM, after a full day on the road, Rebecca and I rode into the city and made our way to our host’s home.

What’s next? As of today, we have only 24 days remaining on our 6-month Mexican tourist visa and having spent the past few days riding the highways, we are now more motivated than ever to find a dirt-road alternative to the Guatemalan border. We’ve learned our lesson… highways are for cars, not for us!

If only our dinghy could repair itself