I’m writing this post while sitting in a comfortable bed, after an exquisite shower (they are all exquisite when being compared to boaters’ navy showers) and a hot meal, all courtesy of some friendly cycling enthusiasts who welcomed us into their home. To tell the truth, our entire adventure since leaving our daughter’s home on Thursday morning has been punctuated by experiences just like this, making me think that cycling only attracts people with big hearts. 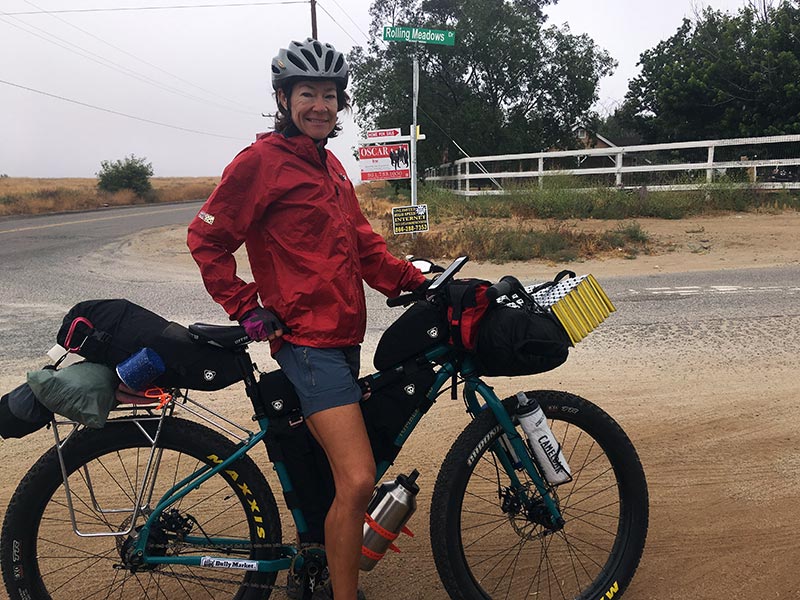 This is the furthest point that we had ridden on our training rides. Everything beyond this spot was to be new for us.

No one can accuse us of not jumping in with both feet when we try something new, and our brand new cycling journey is a perfect example of that. To be honest though, the first day we probably bit off a bit more than we should have, but it was tough to do otherwise given our starting point, and the lack of camping options on our route. 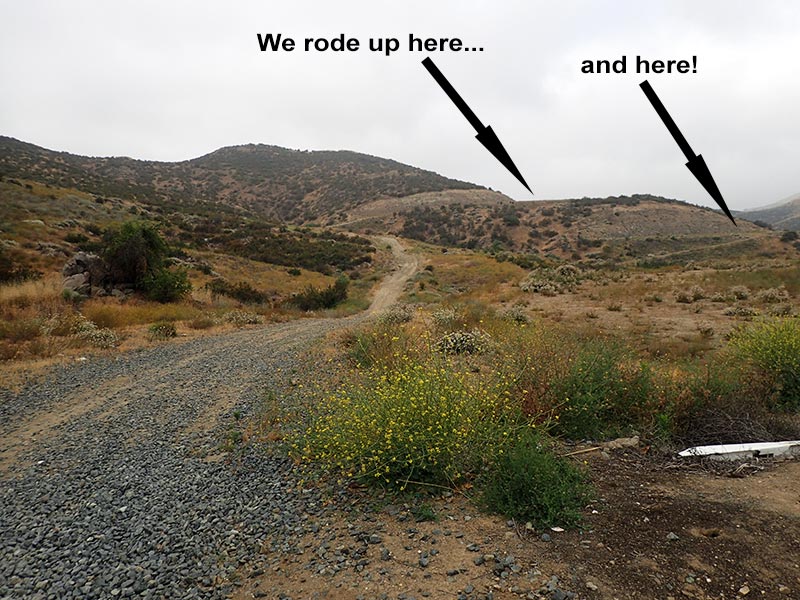 Because we were beginning our journey inland a bit, we had to figure out a way to get to San Diego, the jumping off point for the Baja Divide. We tried to use a particular cycling website’s auto routing feature to plot a course for us and it failed us miserably, virtually right out of the gate. Less than an hour into our ride, we found ourselves searching for a road that simply did not exist. The aforementioned searching involved pushing our bikes up steep dirt trails, several times over. After all, the road/trail had to be there, right? Well, it wasn’t, and given the fact that we were, at that point, in a maze-like network of one way streets, we were forced to backtrack a considerable amount, up more hills, just to find an alternate way back onto our route. This not only set us back more than an hour, it also added work to what would ultimately be a very full day. 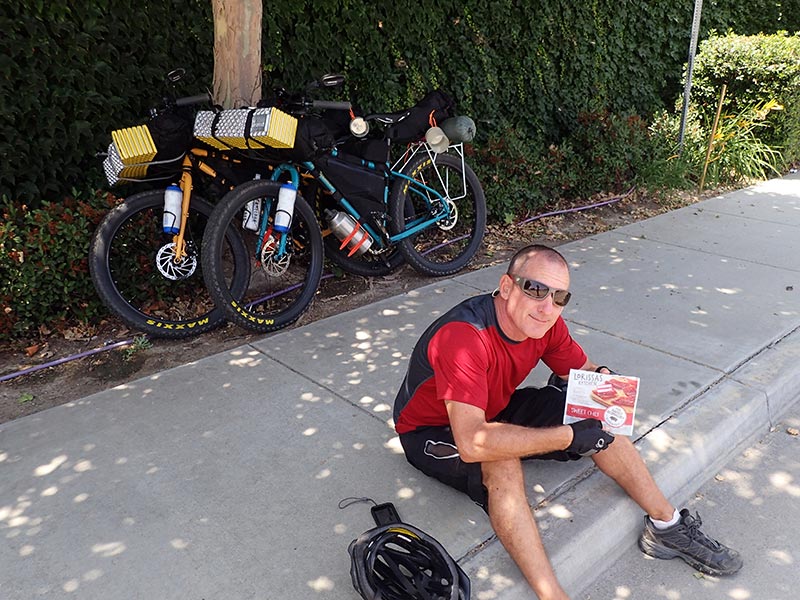 Lunch spot, on a sidewalk, one of the few places we could find shade.

After an extremely-tiring 52 miles, which included abut 10x more steep climbing than I would have preferred for my first day, and also several more auto-routing fails, we found our way to Fallbrook, at the home of Tigre and Lola. We contacted Tigre through Warmshowers, partly because their home was on our route to San Diego, but also because Tigre has done quite a bit of cycling in Peru, and I was quite interested in hearing about his travels. Our first night on the road could not have ended any better, as they completely pampered us. Such a welcoming family! 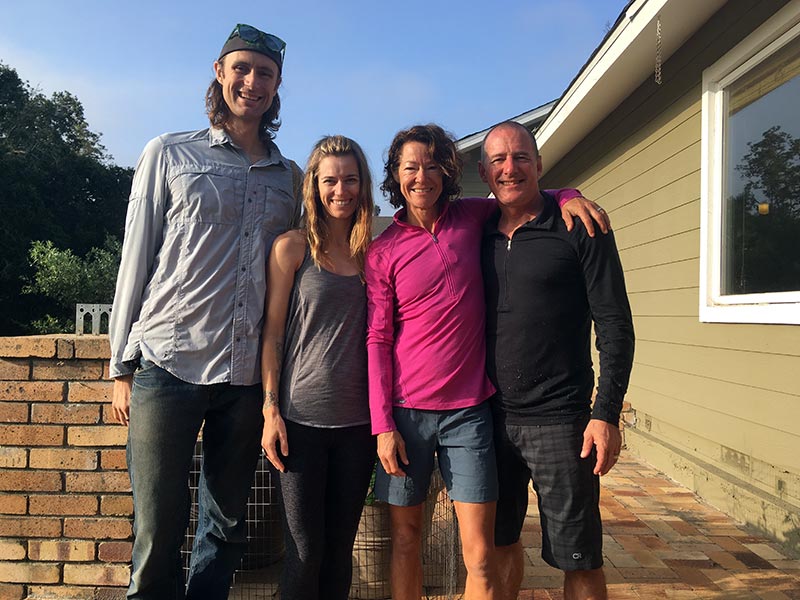 Tigre and Lola completely pampered us.

The second day started off tough as well as we needed to, right out of the gate, climb up out of the canyon where Tigre and Lola live. Unfortunately, my knee was not so happy from the first too-long day of riding so that didn’t help matters. We were well on our way to more auto-routing troubles when we found ourselves stopped on a busy street corner with Kelly, a randonneur out for a day’s ride. After sharing the “where are you coming from and where are you going” details, he suggested that the route he was about to take might be preferable to the one that our GPS was suggesting, and we wisely took him up on his offer to follow him! We not only enjoyed the conversation during the time that we rode together, but I especially appreciated the almost completely flat bike trail that he led us on to the coast. Kelly rode with us right to the Oceanside wooden pier before bidding us adieux, and because we were traveling far slower than I assume he would have normally, he completely gave up his workout for us. Thanks, Kelly! 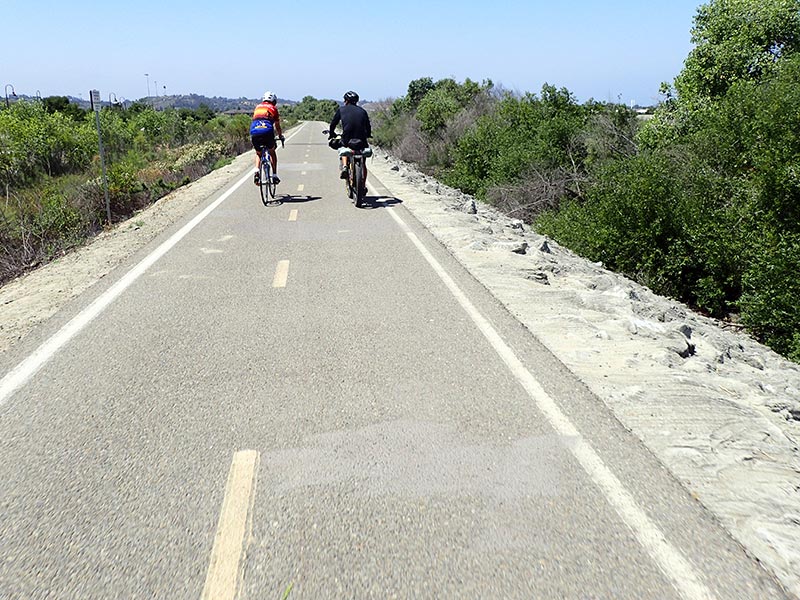 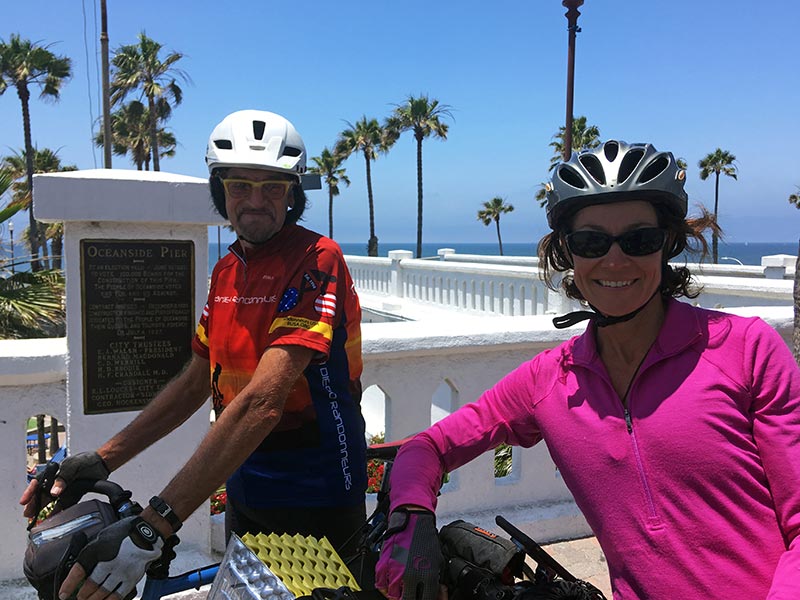 Some hours later, after a shorter but still long-enough 32-mile day, we made it to Leucadia, where we were being expected by Rod and his wife Erin. Rod, a sailing enthusiast, saw my post on our Facebook page where I was looking for a place to pitch our tent. Just as Tigre and Lola did, Rod invited us to join him and his wife at their home. Not only that, he also invited some adventure-minded friends of theirs over to the house so that we could have a fun evening swapping stories. 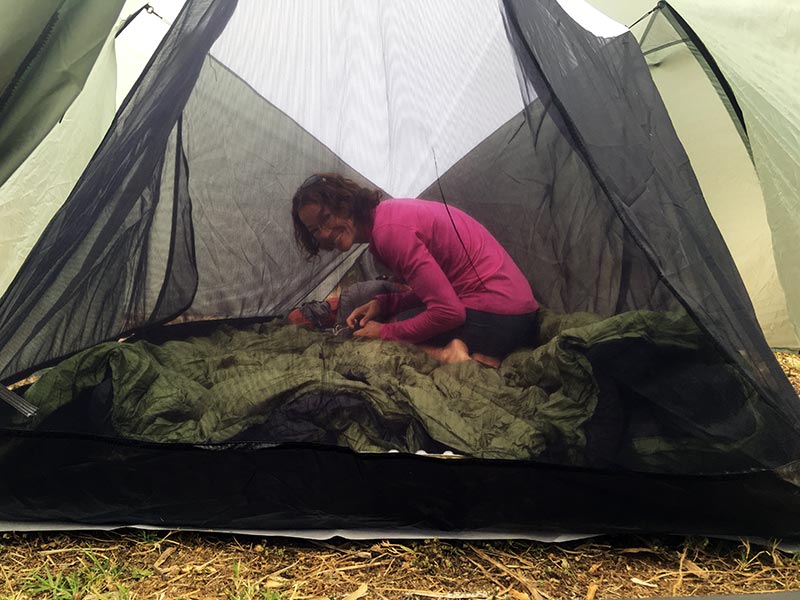 Rebecca getting our sleeping quarters all organized. 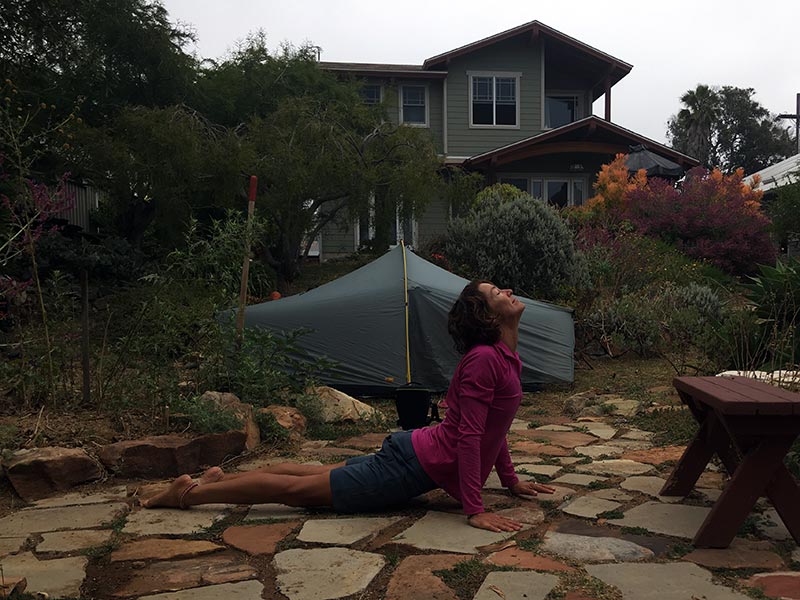 We both needed to do some stretching after our ride. 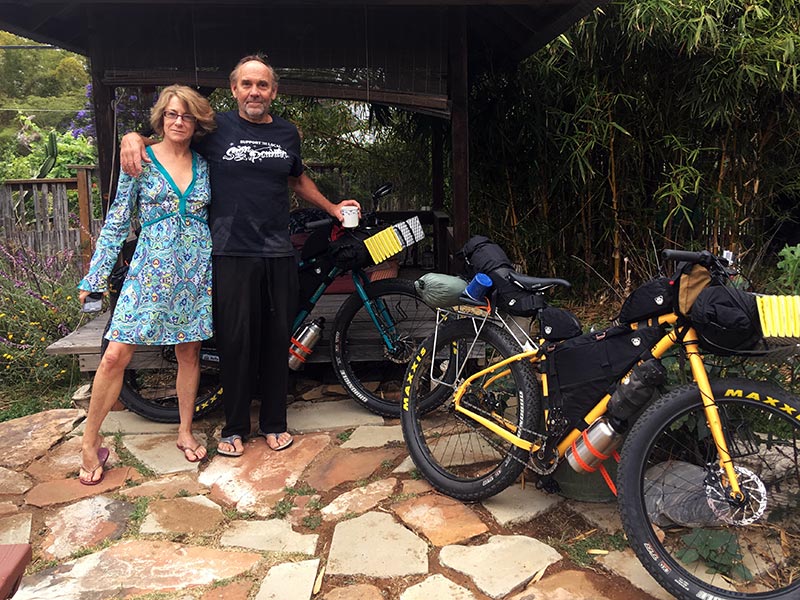 Rod and Erin, just before we took off this morning.

Although they offered us several options for sleeping, we chose to pitch our tent in their backyard so that we could test out our sleep system (we slept in Tigre and Lola’s huge yurt-like tent the first night, not our own). While some might not think that sleeping on a foam pad in a relatively tiny tent is enjoyable, we had a great night’s sleep, no doubt at least partially influenced by the two full days of riding. I should also mention that no sleep occurred until we were well fed by an amazing surf and turf dinner. 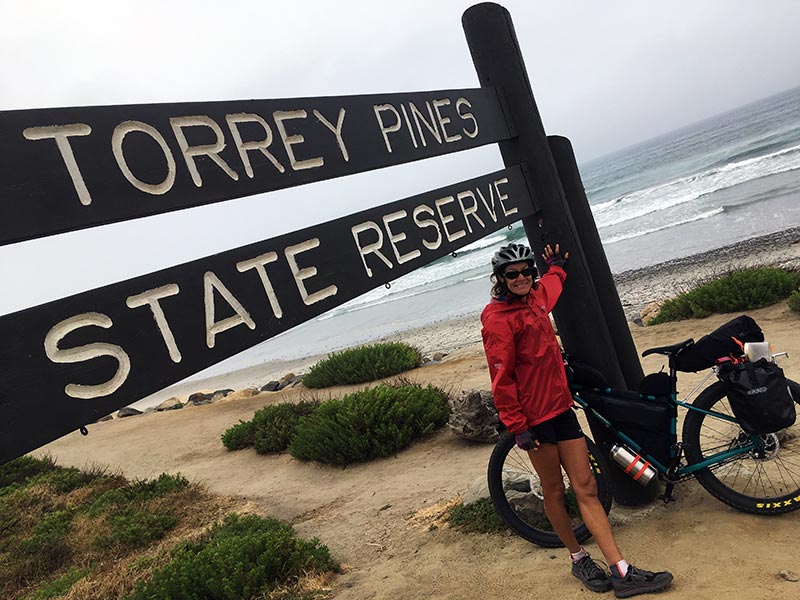 We stopped for a quick fruit break before tackling the long hill at Torrey Pines. 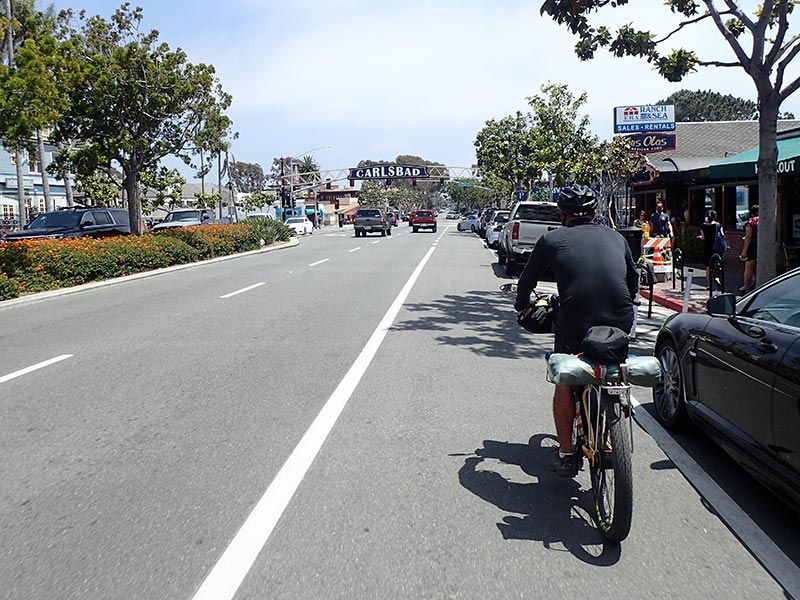 Wide bike lanes are much appreciated!

Day three on the road followed the coast for the most part, so we were less at the mercy of any routing challenges. Although we travelled a good chunk of it on the fairly busy 101 highway, the designated bike lanes made us feel pretty safe. In fact, rather than the cars, we almost had to watch out more for the other cyclists, of which there were hundreds, all whizzing by us on their skinny-tired road bikes. We did have the chance to chat with several of them, and they all seemed genuinely intrigued by our proposed journey.

Tonight we’re staying with Chris and Alisa who are also cycling enthusiasts and Warmshowers hosts. They have, in fact, hosted dozens of cycling tourers, including a number who have ridden the route that we’ll be following next. In addition to offering us a warm and safe place to sleep, they were also kind enough to share some much-appreciated intel on the area that we’ll be riding tomorrow.

Where will that be? Our plan is to head towards the Mexican border town of Tecate. Like sailing, we’ll only say that we’re heading towards that point, not that we’ll make it there. In all likelihood, we’ll end up camping somewhere along the way. We have been warned that this ride, if not the entire Baja Divide route, includes some tough climbing, and as my cycling legs are nowhere near yet developed, we’ll be taking our time, out of necessity.

An entire day of travel, as good as it gets