When feeling overwhelmed, relax and take a day off

Remember how I said we were going to leave San Diego on Sunday to head towards Mexico? Well, we didn’t. Shortly after waking, I found myself overwhelmed with trying to work through a long list of last minute details, many of which were taking far too much time and mental energy to complete. An executive decision was quickly made to delay our departure for one more day, and not surprisingly, Chris and Alisa had no problem with us remaining another night with them. My legs were also 100% in agreement with the decision to take a day off from riding! 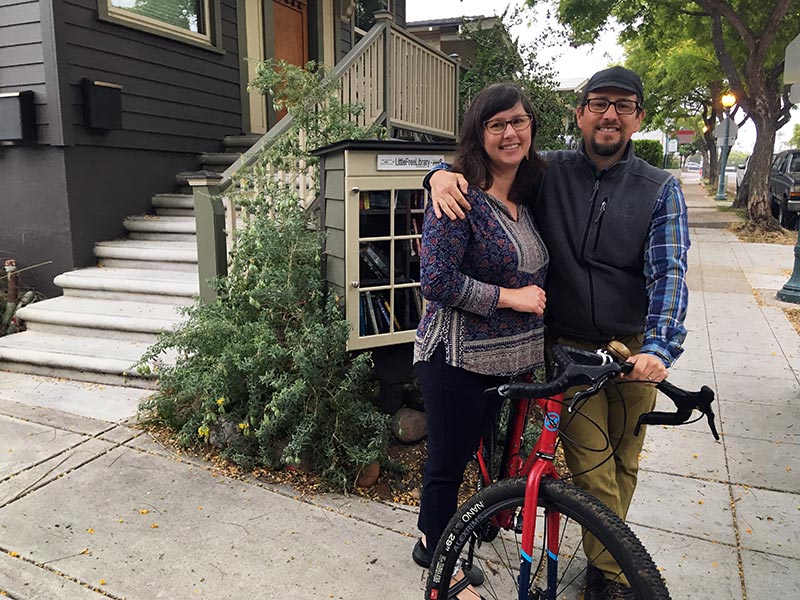 Our generous hosts: Alisa and Chris

Among our list of things to accomplish was downloading the maps for the next section to our GAIA navigation app. While the app seems to work like a charm, downloading the maps to it takes place at a snail’s pace. I’m not kidding! Even though we’re on a super-fast internet connection, I was having flashbacks to when I was 14 years old trying to connect to the internet on a 2400 baud modem. Lesson learned, plan ahead!

We also decided that we needed to make one more run to REI before we left the land of plenty, and Chris was kind enough to drive us there. Of course, all outdoor-minded people are always looking for an excuse to visit REI. 🙂

First on our shopping list was another set of panniers. When we had our bikes built, we had rear racks added thinking that we might need a small set of panniers to supplement our bikepacking bag setup, but tried to see if we could get away with just one pair though. We installed the single set of panniers that we purchased onto my bike, and after loading them up, I carried them for the first day of our trip, and for the first hour or so of the second.

With my knee protesting after that long first day of riding, Rebecca opted to install the panniers on her bike, partially to stop my swearing about them, but also probably so that she could have an even better workout. It was only when we lifted them off my bike that we realized just how heavy they were. Hea-vy! Now, with two sets, we won’t be carrying more gear, but we will be able to more fairly distribute it. Equity for all.

The second thing we decided to pick up was a small MSR water filter. I wrote how we had purchased a Steripen to sterilize suspect drinking water, but several people were quick to point out how those UV devices were less effective if the water was turbid or silty. Obviously we’ll be trying to obtain water from good sources but if stuck, this small and lightweight device will give us some more options.

The final thing we picked up is a small solar panel. While monitoring the charging ability of our dyno hubs during our ride to San Diego, I became increasingly concerned that they would not meet our energy needs south of the border. While traveling in Baja the pace of most travelers is typically slower than normal, and I’ve noted that our dyno hubs don’t start charging until we’re going at least 5 MPH. We purchased the solar panel as a backup, knowing that if there’s one thing we’re going to have, it’s sunshine. During the brief test that I gave it, the panel managed to charge my iPhone 15% in only 16 minutes. Not bad!

This morning we’re definitely heading south. It may take a couple of days before we actually cross into Mexico, but from this point forward, we’ll pretty much be off the grid. We’ll touch base again when we get there.

Downtime travel, with and without our bikes

We reached the end of the road – literally and figuratively

Quilts vs sleeping bags: ounces add up to pounds