35. That was the magic number yesterday. 35 steps and then rest. 35 five steps and then rest. That was how we made it to the top of Otay Mountain. When we weren’t counting steps, we were playing other mind games like push the bike to the next post, or to the second bush, or to the corner. I’m not embarrassed to say it: we pushed the bikes 90% of the way up the mountain. One day maybe I’ll be a rider who could pedal all the way to the top of a hill like that, but I’m not there yet.

We started the day early, leaving Chris and Alisa’s house at 7:20. Chris rode with us at the beginning, pointing the way to where we could meet up with the Baja Divide route (it’s mapped from the San Diego airport, and fortunately we weren’t all that far from the trail). The ride from downtown San Diego, through Bonita and Chula Vista, was pleasant. The weather was overcast, and thus not overly warm, and we took our time, stopping for breakfast and coffee breaks. 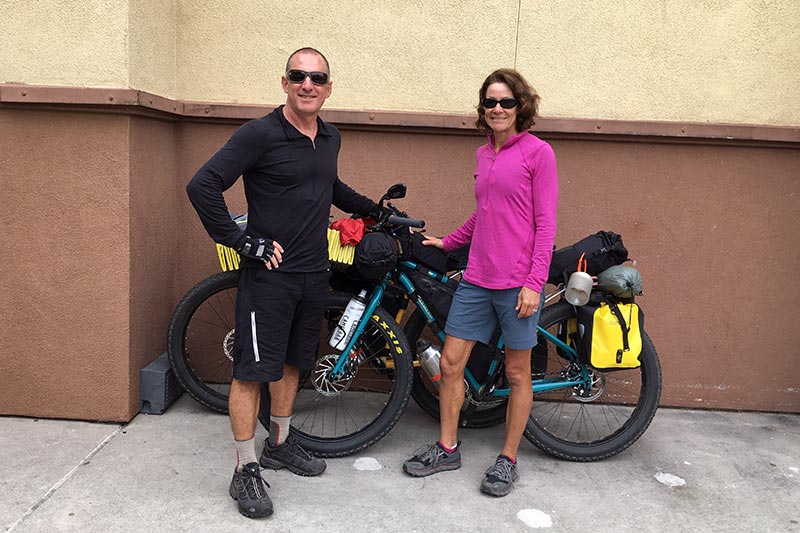 Coffee break 2 of the day. 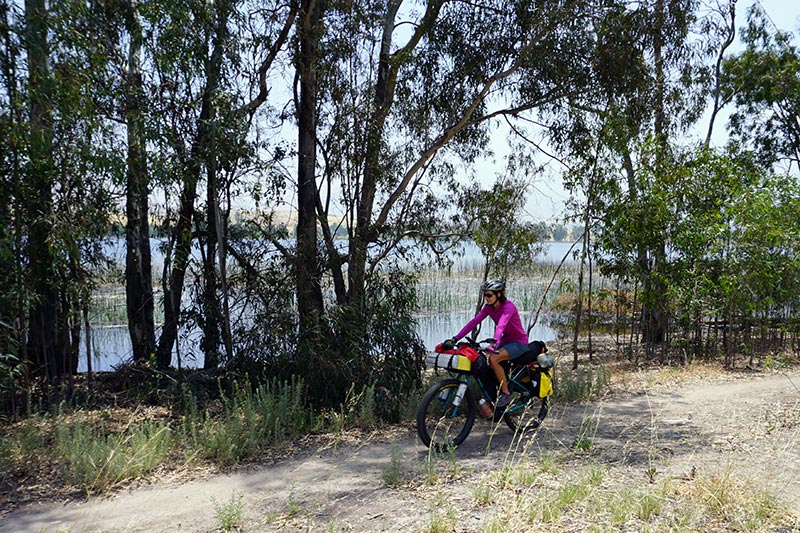 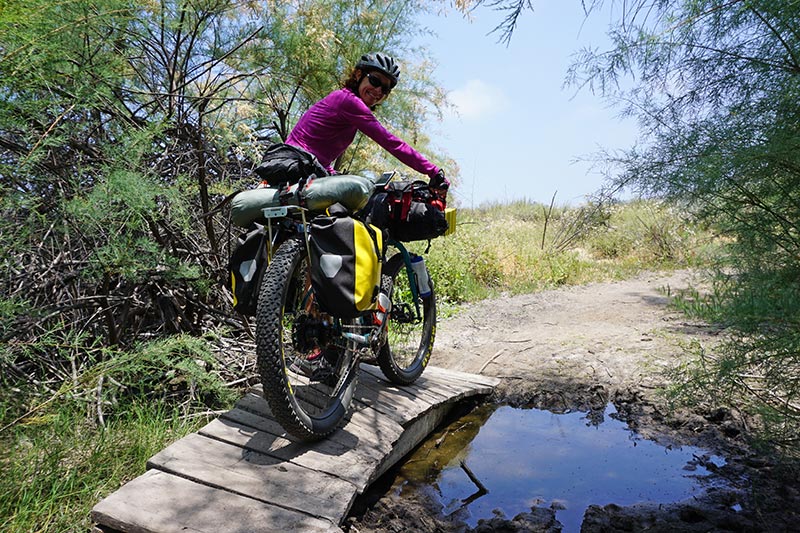 Did they build this bridge on a slant on purpose, or did it sink in the mud? 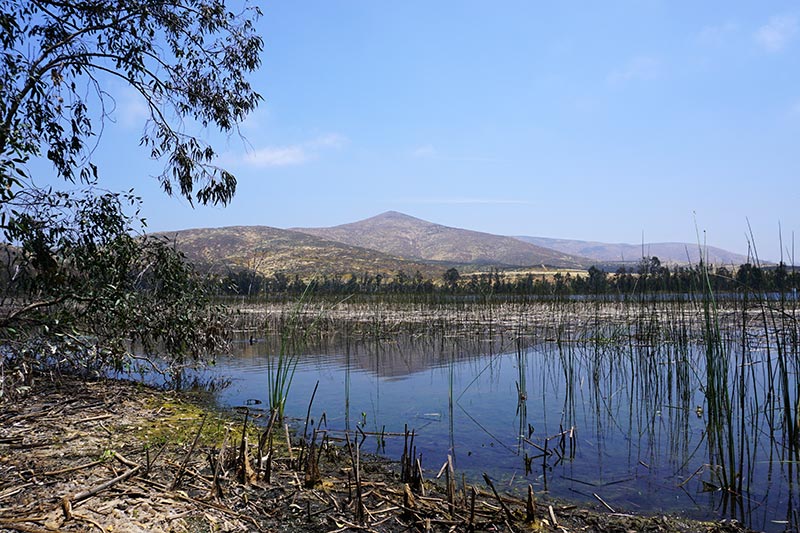 We’d be climbing up to the top of that. 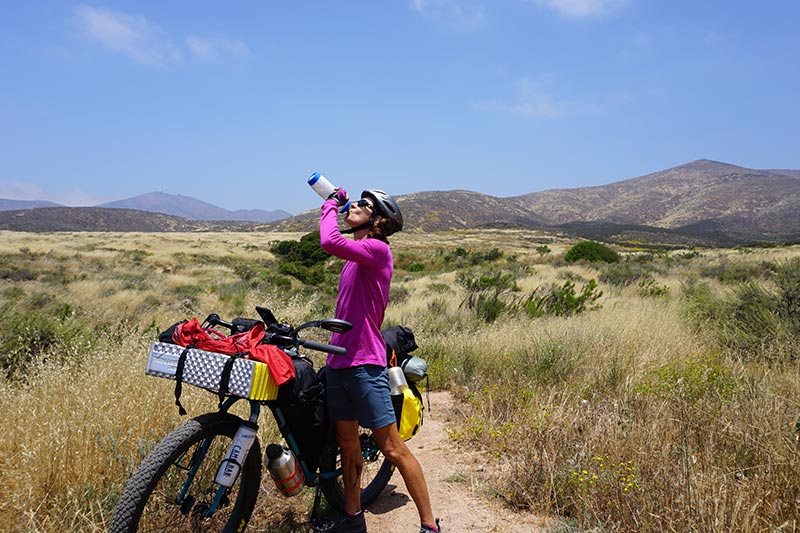 Water consumption increased with the clearing of the sky. 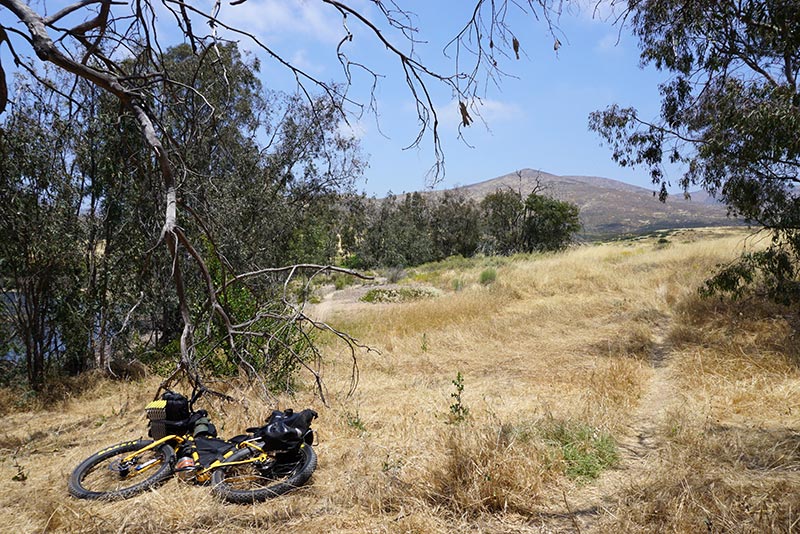 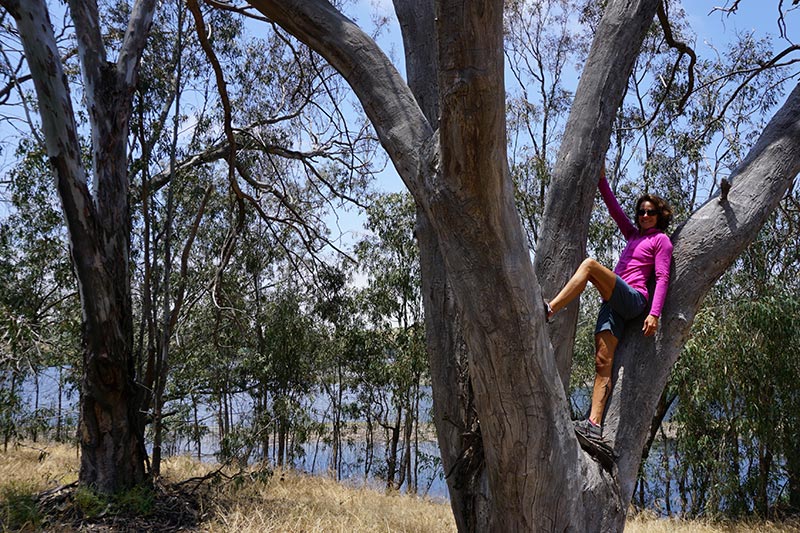 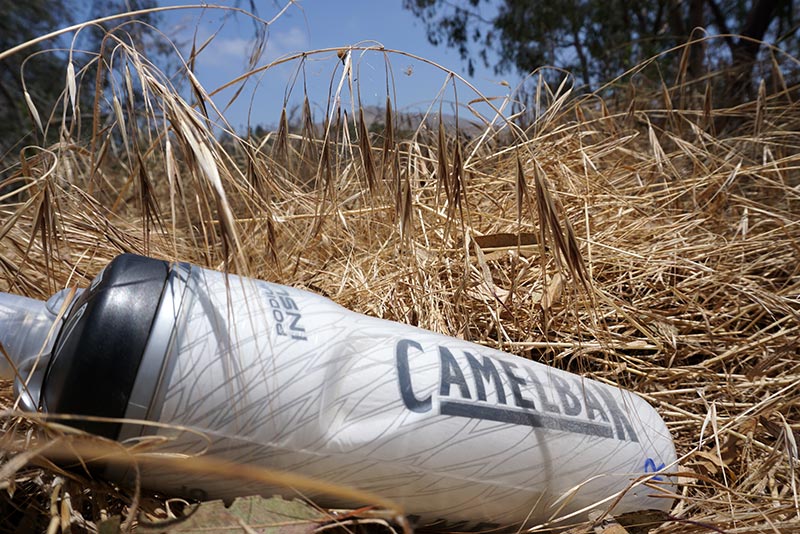 Not sponsored by Camelbak. 🙂

The ride around Otay Lake was especially enjoyable. The single-track trail was fun and scenic, and we had a picnic lunch of sorts not far from the shoreline. By 2:12, after having already traveled 31.5 miles that day, we were poised to begin the climb up the mountain. That’s when it got tough. 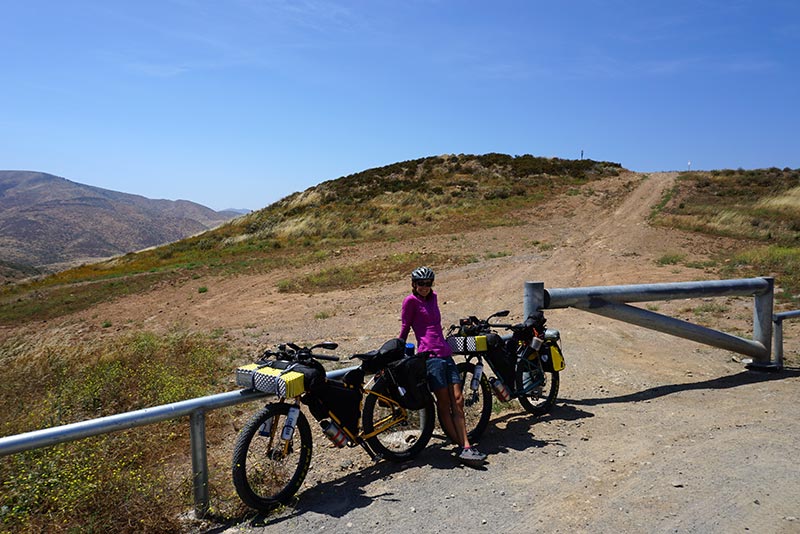 What was that gate built to keep out? Elephants? 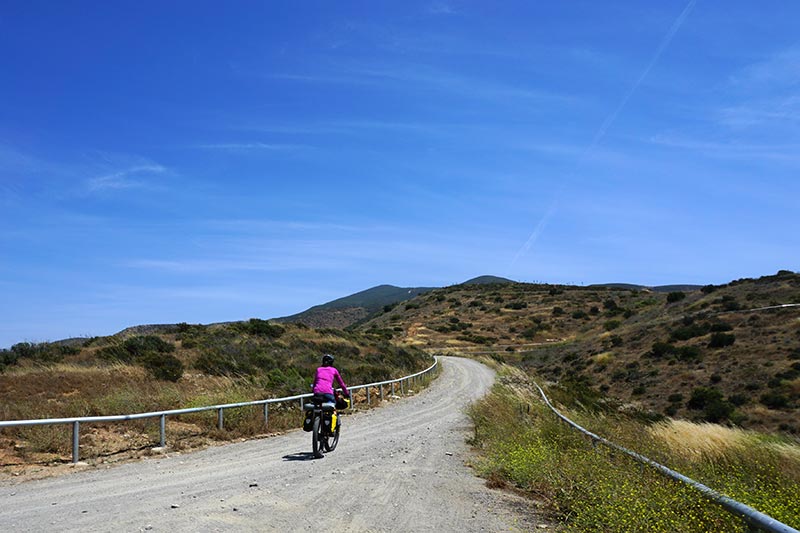 Still near the beginning of the climb.

I should point out that we had no real intention of climbing all the way to the top, but rather just getting some of the climbing done before camping for the night. Unfortunately, finding a camping spot on the steep mountain side was next to impossible. The clouds had long since given way to afternoon sunshine, and the heat wasn’t making things much better. We persevered though, playing our mind games, with music to keep us company thanks to an iPhone playlist.

As we inched our way up the hill we were passed close to a dozen times by Customs and Border Protection officers. We tried to make ourselves small on the side of the narrow road to allow them to pass. Many of them stopped to chat with us, to ask where we were going, and to offer advice or words of encouragement. One officer let us know that they were “working a group” in the area, and to keep our eyes open and to be careful. Even when we were still some distance from the top, a couple of officers told us, no problem, you’ll make it (to Barrett Junction, where we had suggested to them we might ride to). We were less optimistic, but were in good spirits, and committed to persevere. 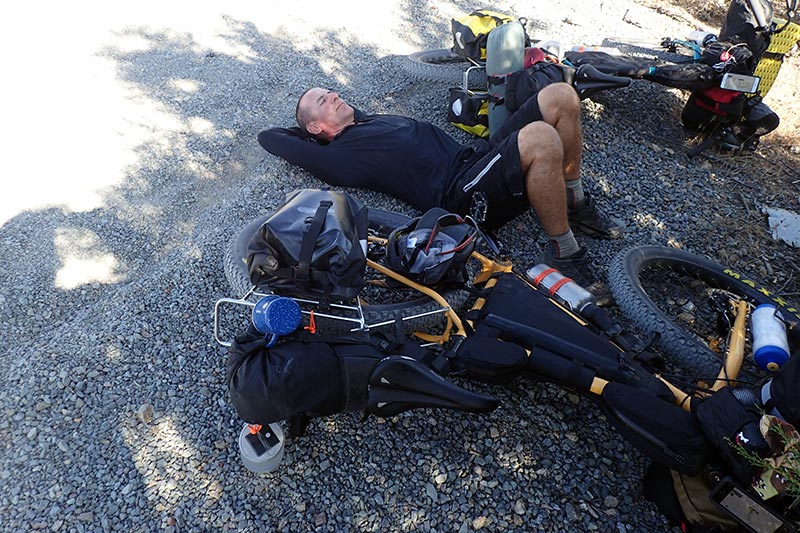 Taking advantage of one of the very rare shady spots on the climb.

When we finally reached the top – not quite the summit but the highest point on the route – an officer stopped to congratulate us on our accomplishment. It was him that suggested a camping spot unbeknownst to us, Chicken Ranch, an area of flat land somewhere downhill from where we were standing. Having a spot to stop not far from there sounded great to us, so when our mountain top photo shoot was completed, we set off in search of it. 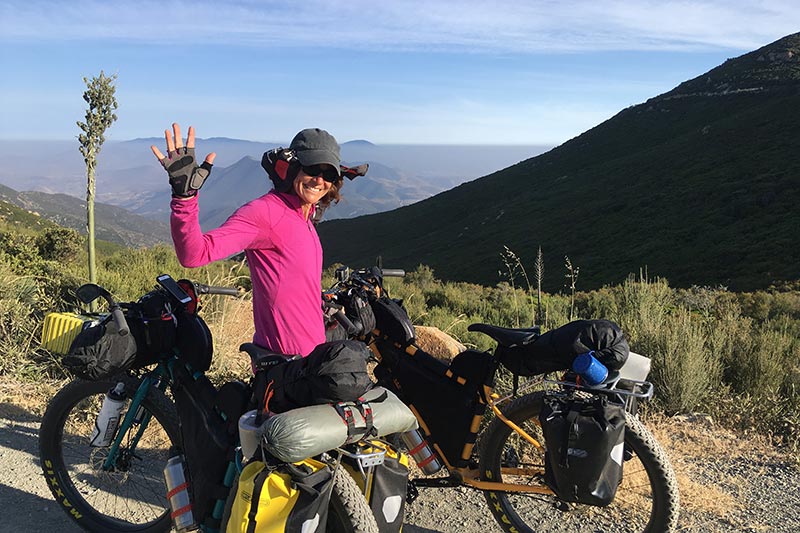 The highest point of our climb, Doghouse Junction. 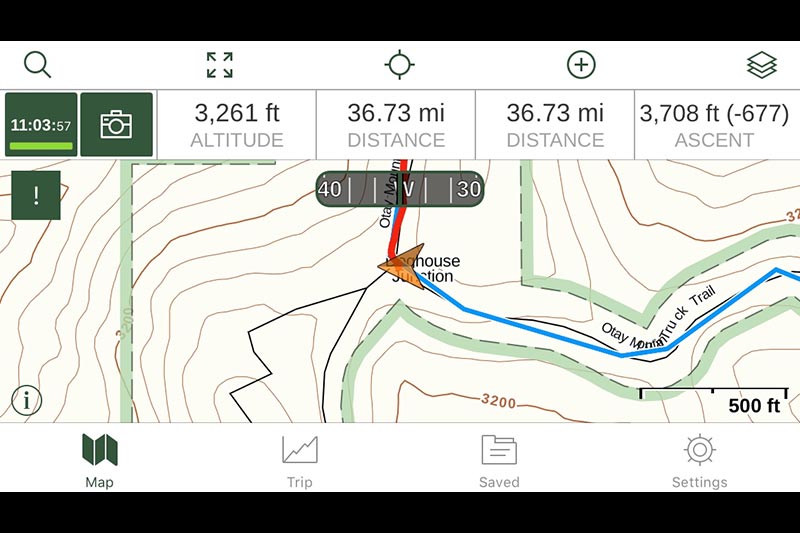 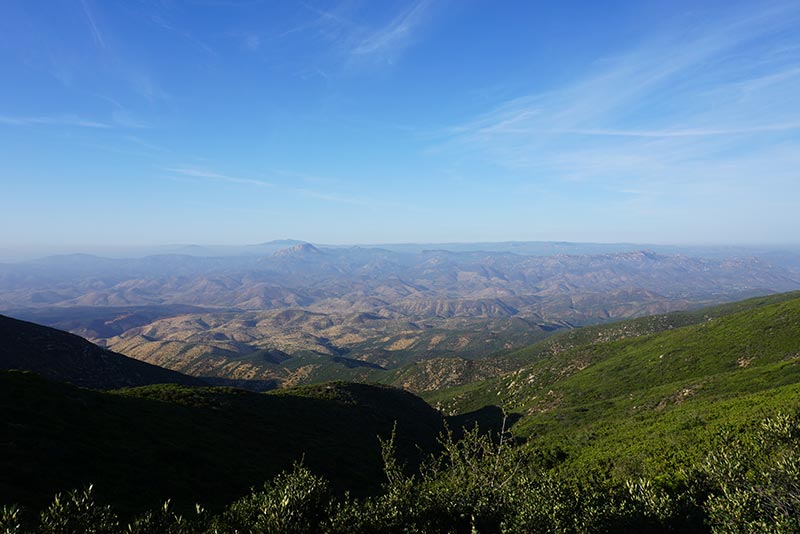 Beautiful colors with the setting sun. 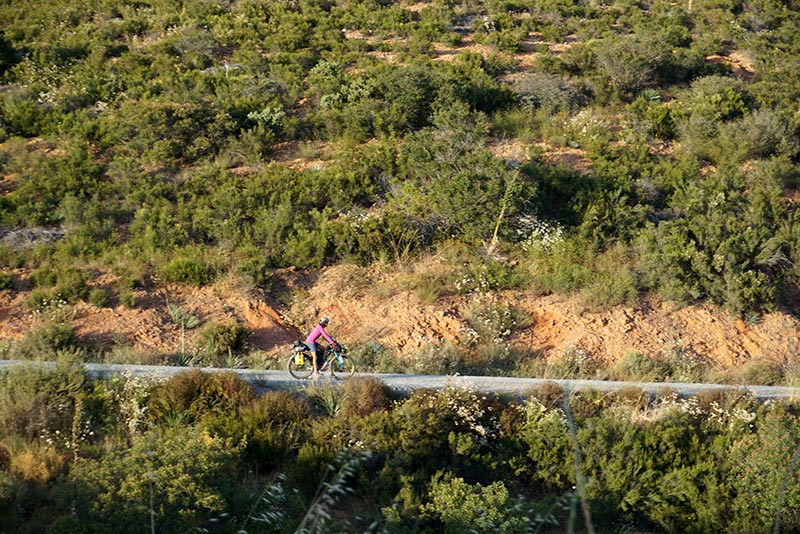 “Hey, Rebecca, I’ll wait here and take your pic as you ride down the hill.”

Our brakes got a workout as we quickly descended the shady side of the mountain. It’s almost painful to so quickly give up all that hard-gained elevation, but that’s the way it goes. I’m sure that scenario will repeat itself countless times over. What the officers had called Chicken Ranch revealed itself after a half an hour or so, and it was, by coincidence, located right by the spot where the Baja Divide route branched off from the road.

We were quick to make camp, and just as quick to get dinner underway. While we may be newbies at the whole bike touring thing, both Rebecca and I have some experience with setting up camp. Our first night wild camping was peaceful, and even though we had been warned that we may get paid a visit by the midnight-shift Border Protection officers, no one came (we were told that they have infrared cameras in that area, and so are able to tell if people are out and about). The final tally for yesterday: 41.5 miles in 12 hours. A long day, I think, by most anyone’s standards. 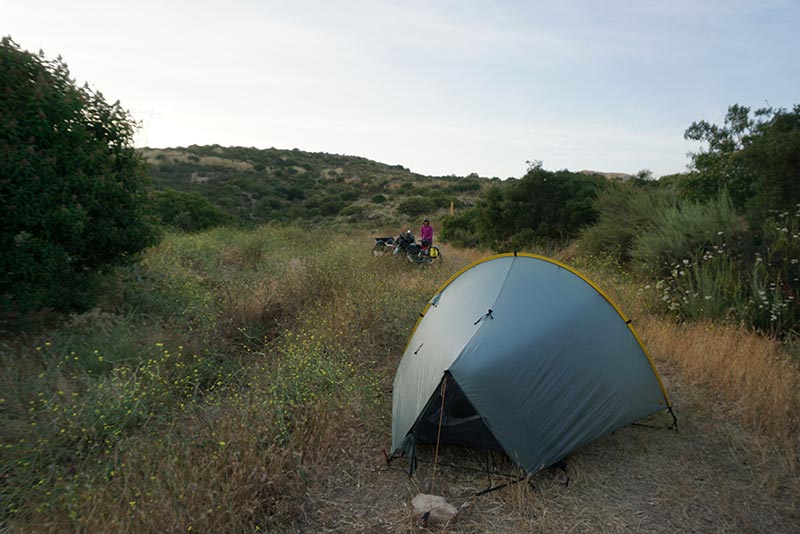 Forth time pitching our tent. Getting better, but still not perfect. 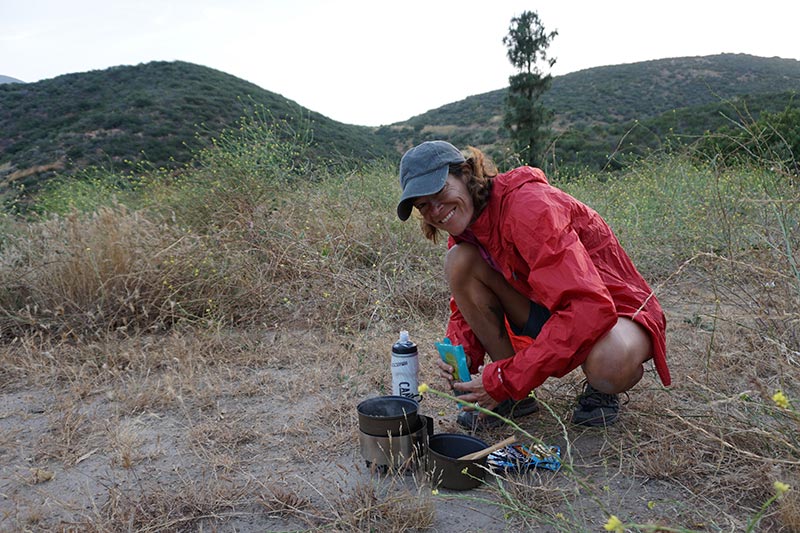 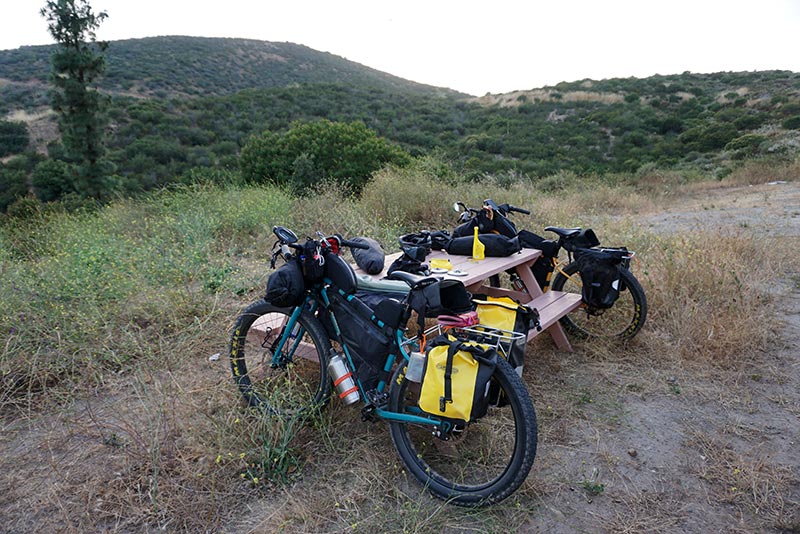 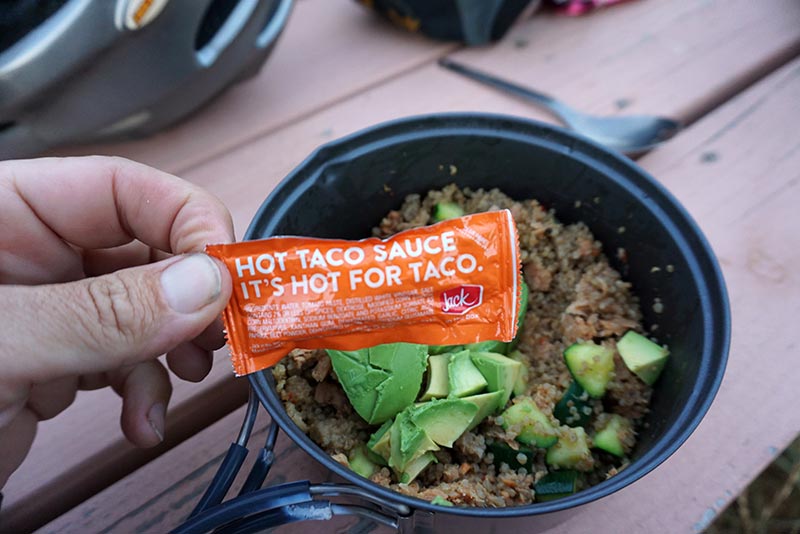 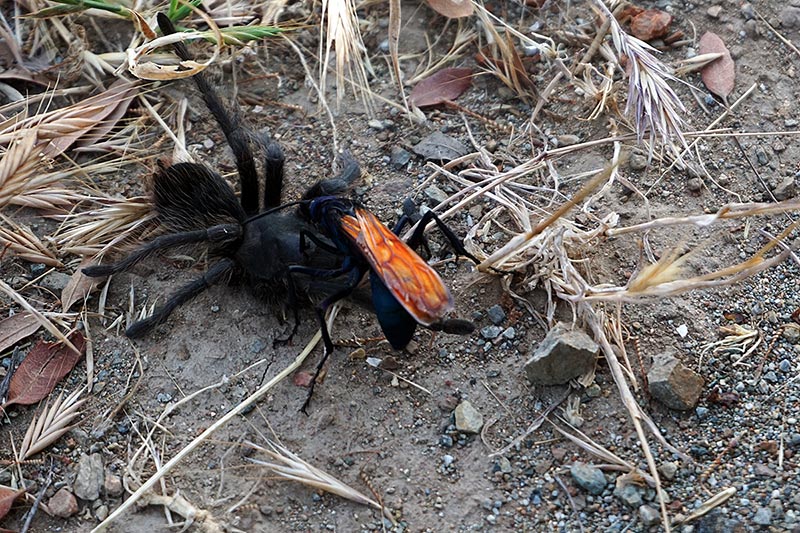 Maybe we should be more afraid of the bug EATING the tarantula than of the spiders themselves!

The calm after the storm