Rum Cay in the southern Exumas boasts a community of less than 100 people and we may have already met about 25% of them.

We arrived here Thursday at low tide and after picking our way between the coral heads, found an anchoring spot in about 4 feet of water. The guidebook suggested tucking in as close to shore as possible to avoid the swell that comes around Sumner Point but the skinny water made it challenging. It was also a tiny bit strange because when we first arrived here, we were the only boat in the anchorage and we had expected quite a few others. Since that time 3 others boats have made there way here including Wade and Maureen on s/v Just Drifting. Although we never hung out, we came to know Wade back in GT through playing volleyball.

Yesterday was filled with troubleshooting, repairs, spearfishing and in the evening, socializing. Today will likely be much the same. 🙂 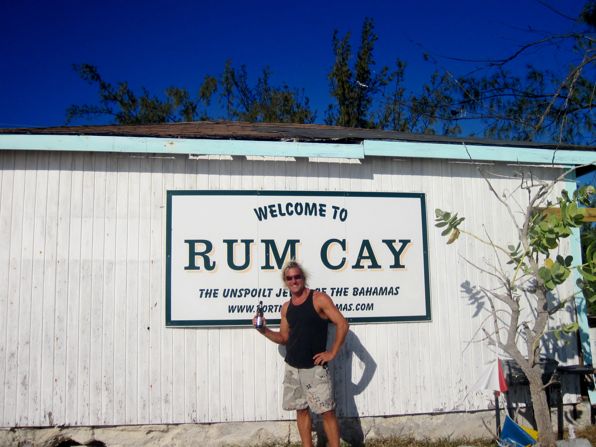 Welcome to Rum Cay. The truth is I just found that beer bottle lying on the ground but I thought it would add to the pic. 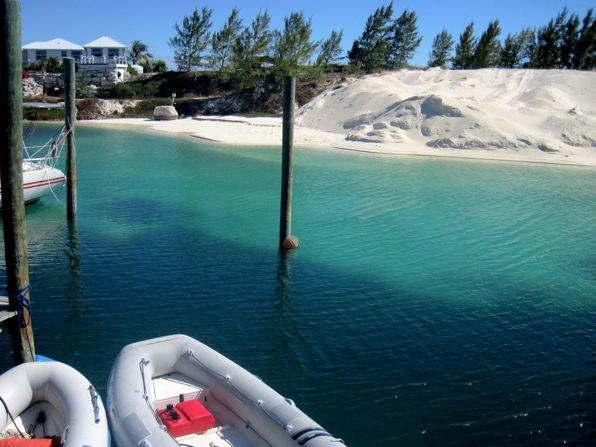 Sumner Point Marina, where we tied up our dinghy. 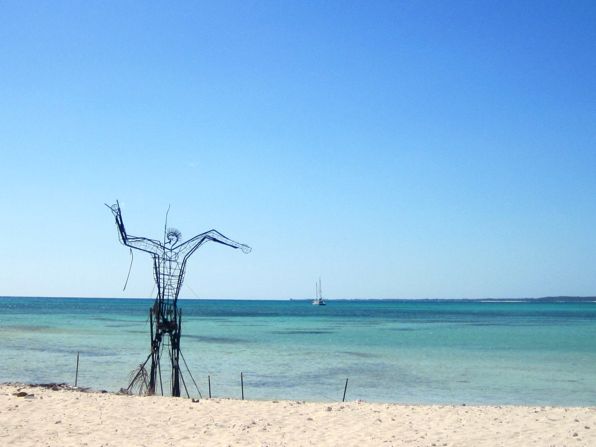 Somewhat scary statue on the beach. The place was a tad eerie because we couldn’t find ANY people. 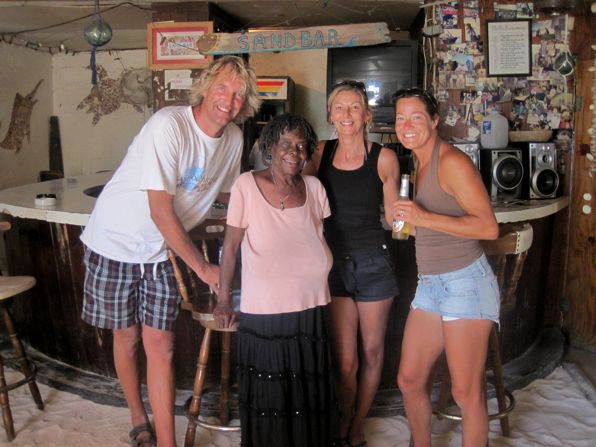 We ultimately made our way to Kaye’s Bar. THAT is where all the people were hanging out. This is Wade, Maureen and Rebecca with the owner Doloris. We enjoyed some cold beer there and she treated us to some free fish with Bahamian rice and peas. 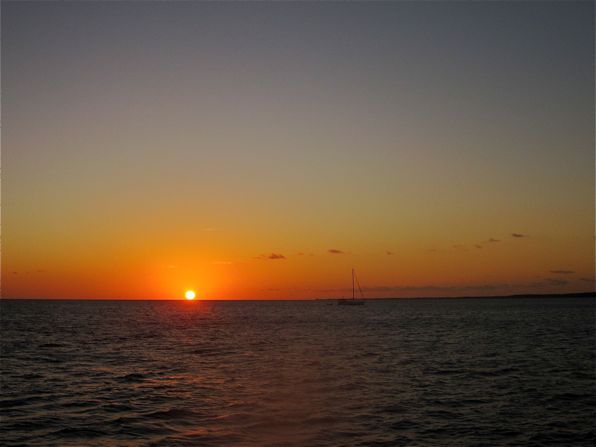 Watching the sun set by our friends’ 50′ Beneteau. 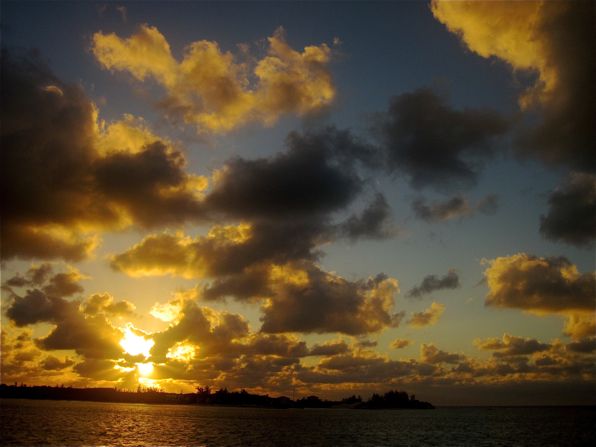 The sun sets and then it rises. We are treated to views like this just about every day. 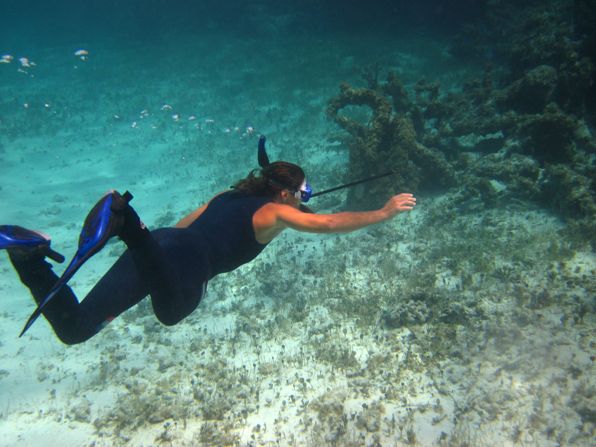 Out looking for dinner. 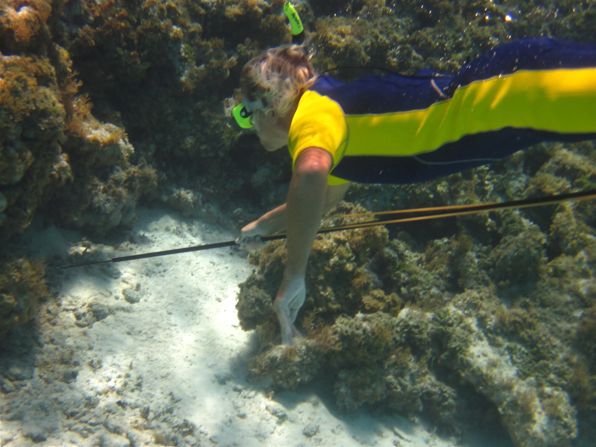 Rebecca spotted a Lion Fish and I went down to take a shot at it. I missed and he took off. 🙁 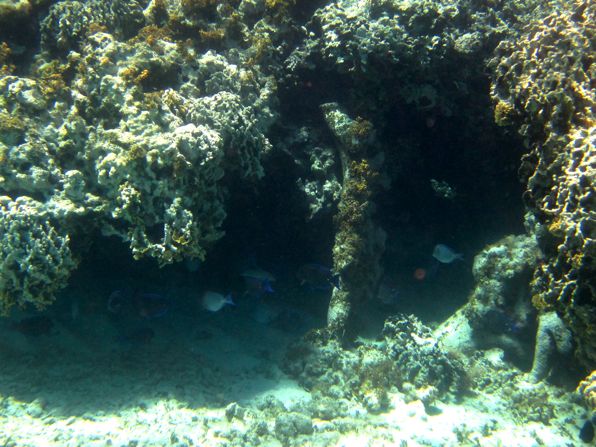 We found some big fish hiding inside this cave. No, I was not going in after them and I could get them to come out, not matter how sweetly I asked. 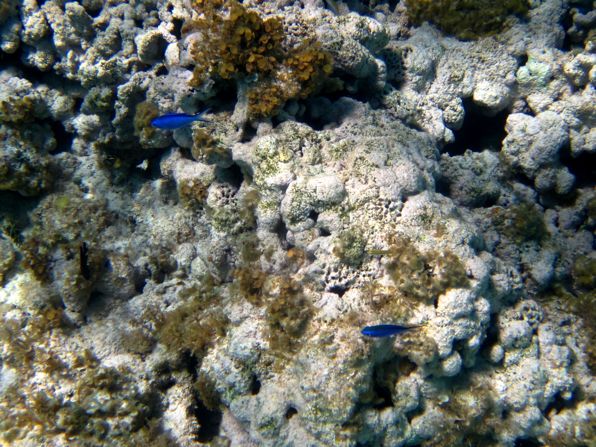 We had to settle for looking at the pretty little fish. We did get to eat some tuna sushi on Just Drifting later that day though!

Woo hoo! One down…