On not being stranded

The post the I wrote titled the Single-handed Cruising Couple drew a lot of feedback. For those not familiar with that post, it voiced my opinion that both halves of a cruising couple should be able to handle the primary functions on a boat. One such duty which we believe should be included in that list is operating the vessel’s tender.

It might surprise you how many (relatively new) couples we have come across where only the male half is comfortable operating the dinghy. Starting the outboard engine, raising and lowering it and landing the dinghy on the beach are all skills which both parties need to be able to do. Although when we’re both in the dinghy I do operate the engine in most cases, Rebecca is perfectly capable of doing it herself and often takes it out alone when she’s running errands, etc.

Tip: ALWAYS have the kill switch attached to you, ESPECIALLY when in the dinghy by yourself!

Having the above-mentioned skill gives a great deal of freedom to both halves of the couple, each being able to function independently without needing to be ferried around to other boats or to shore. That does bring up a separate issue though, that being when one party takes the dinghy to go somewhere, the other half of the couple is somewhat stranded on the boat. This is where Rebecca’s birthday present, her new kayak, has a practical usage. In addition to allowing one of us to explore the coastline and reefs, it also provides a method of transport when the other half of the ZTC crew is off somewhere else. If you’ve even been marooned on a boat, you’ll know how valuable this is.

And speaking of alternate methods of transport, Rebecca and I now have in our possession two like-new folding bikes. I have written about the subject of bikes on board before and it was only a lack of money that was keeping us from investing in a pair of them. Some time ago I noticed that a couple in Puerto Rico had listed two bikes that they were selling on Desperate Sailors (sadly, this website is no longer online). The bikes sounded good, the price was right but sadly they were a bit too far away. The other day we were happily surprised to see that same ad posted in the Grenada Cruisers Facebook Page. Needless to say, we contacted them right away. They told us that the bikes had only been used twice and when we inspected them, they looked that way to us too. We were able to pick them up for almost half what they sell for in West Marine!

It wasn’t until yesterday that we were both able to get out on the new bikes and test them out and I’m happy to report that they functioned great. We were able to travel to the hardware store, Budget Marine and the shopping mall in far less time than we could have done so on foot. I think they’re going to be a great addition for us. 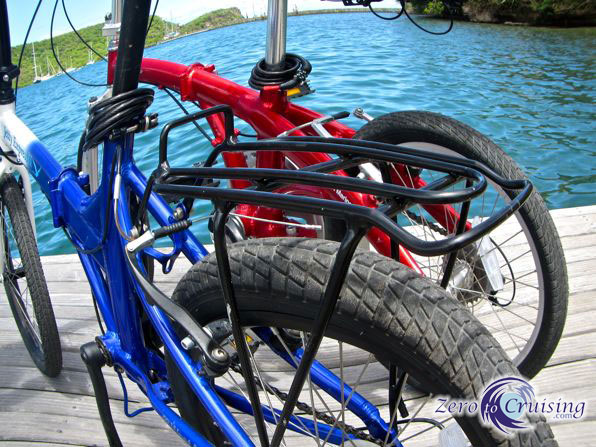 West Marine folding bikes. The Blue one is a Jetty Express II and the Red one is a Port Runner II. We bought them off a couple of cruisers who had only used them twice and got what I think is a great deal!

New kid on the block!

Too many islands in one day