Drama for your entertainment

As luck would have it, not more than 30 minutes after I relayed the story of how our friends Jim and Sherry had an unfortunate run in with a crab pot, we ended up with a bit of the same.

Yesterday morning, after getting underway early, we were enjoying a calm sail along the south coast of St. John. As we neared the western end of the island, I decided to furl our headsail in and motor the last bit rather than jibing again out into deeper waters. Unfortunately, while both engines fired up without hesitation, the starboard engine would stall each time I tried to place it in gear. My guess, which would ultimately be proven to be true, was that we had something wrapped around the prop.

Rather than continue on into crowded Cruz Bay with one engine, we made a hard turn into Rendezvous Bay, a huge anchorage with virtually no other boats in it. We set our anchor in the most sheltered section of the cove and as soon as it was down, I jumped in the water with a knife. As the pic below shows, sure enough there was some net wrapped around the prop. With a bit of work I was able to cut it free and once I had done so, the engine once again began operating as it should. You’d almost think that I orchestrated that entire ordeal just to add a bit of drama to our guests’ day. 🙂 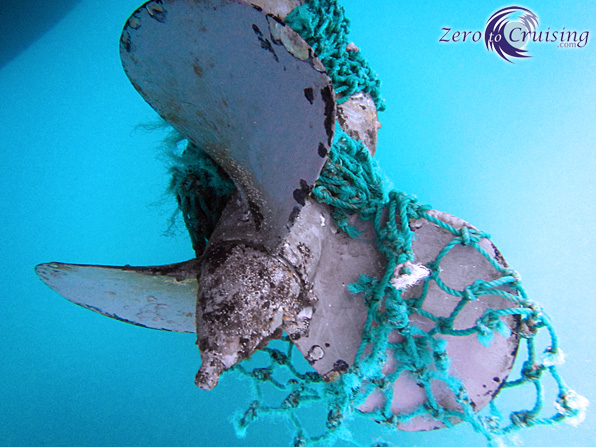 Today is our Christmas guests’ final day with us. Before we head in to the marina later this morning, we plan to do some snorkeling with them, after a good breakfast of course. Once we do return them to shore we’ll have only 24 hours to re-provision and get the boat cleaned and ready for our next group of guests. It’s a lot of work but we really do enjoy helping people to have such a great vacation.
Mike 6:38 am