Can I work while traveling? Yes, but be careful.

In addition to the comments that are posted here on this blog, now totaling over 30,000, we routinely receive private messages on Facebook. The messages we get often include a variety of questions, with one of the more common themes relating to how an aspiring cruiser might be able to work to earn an income. Frequently folks will share their business idea, and/or skill sets, and ask if we think that it would help them to earn some money. What many fail to realize though is that working in a foreign country is not quite as easy as simply showing up, and hanging out their shingle!

Just about every morning in Grenada, Rebecca and I listen to the cruisers’ VHF radio net. Organized nets of this type are quite common in areas where cruisers spend a significant amount of time. Off the top of my head, Georgetown, Exuma, and St. Martin are two other spots that each have one. Subjects discussed on these nets typically include, among other things, social activities, items that are being offered for sale, and projects that boaters need help with.

On yesterday’s net, one of the cruisers who had recently arrived on island, asked for suggestions about where he could get some canvas jobs done. There are a variety of good local shops that do that kind of work, and names and phone numbers were passed along to him to help. Before the net controller could move on to the next subject, another cruiser called in to share that a particular boat was due to arrive in Grenada soon, and that there was someone on board that vessel who could also help with canvas work. Both Rebecca and I cringed when we heard this, waiting for typical onslaught of replies to that suggestion. Replies that would have admonished the caller, citing that it was illegal to work in Grenada without an official permit. Surprisingly it didn’t happen, because it normally does!

Readers may recall that Rebecca and I flew to Barbados to acquire a US work visa, necessary for Canadians like us to run charters out of the USVI.

For obvious reasons, Grenadians are pretty protective of their local labor force. As is true in most countries, it is illegal to exchange services for money here without a permit. This includes jobs that many cruisers might do, such as boat repairs, cutting hair, or in the case I just described, sewing. Are there non-locals who still do jobs like this, under the table? I’m sure there are, but we have not been a party to it. All of the business people that we deal with, mechanics, electricians, delivery services, etc., if they are not Grenadian born, have jumped through the necessary hoops to acquire the proper paperwork.

If you were hoping to have a way to keep the cruising kitty topped up, hopefully my sharing this doesn’t take the wind out of your sails. There are definitely ways to legally earn an income while traveling. Just be sure to do your research, and keep the above in mind so that, when traveling outside your home country, you don’t run into trouble with the local authorities.

Before we left Canada, Rebecca and I were given a cast net as a gift. To tell the truth though, we never really caught onto it, and the net has sat unused for years. In our recent efforts to clean house, we offered the cast net for sale, and it was eagerly purchased by a young boy, with his own money.

After the transaction was completed, I sat with the boy’s mom on the dock and watched him excitedly throw the net into the water. As he pulled it back in, I was horrified to see the retrieval line attached to the net break just as he got it back to the dock. Upon close inspection, I was able to see that the rope portion of the net was rotten, and that I could break it by hand quite easily. Obviously, that wouldn’t do.

Feeling quite bad at that point, I offered the purchasers their money back. I also offered to fix it for them. Huge mistake on my part! Rebecca and I spent a good chunk of the day Wednesday repairing it, and we’re still not done. Also, the cord that I used to replace the rotten stuff (Dyneema – the only stuff I had on board) is worth more than what I sold the net for! Oh well, at least the boy will be able to have some fun when we’re done. 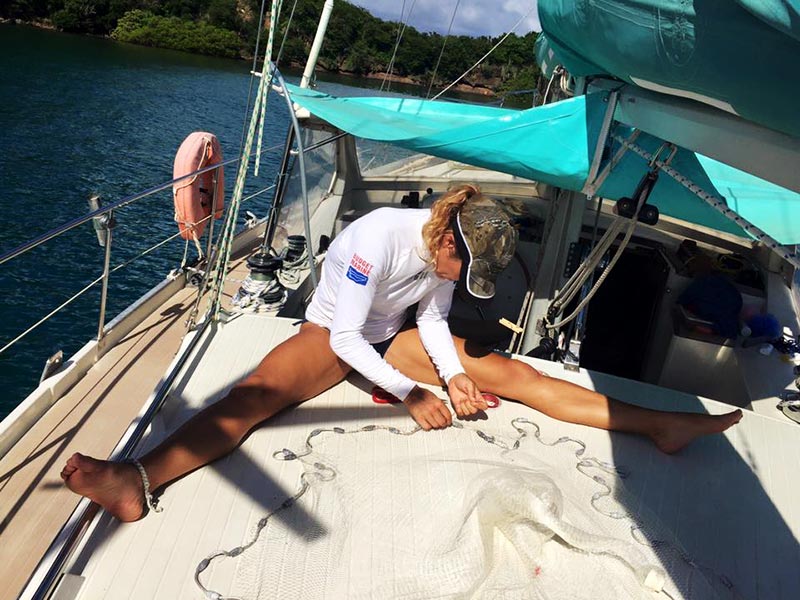