What’s the first thing someone does when opening a new business? Well, these days it’s likely register a website domain but in the past it would likely have been get a phone set up for the business. As we’ve had the website(s) set up for some time, albeit without super current pics (I’m working on that), it was time to look after the phone issue.

Michael arrived onto One Love with a bag packed with goodies for the show. Not a large bag, mind you, as he was flying on Spirit Airlines, but a bag nonetheless. One item that he brought with him was a box of new business cards to hand out to the brokers.

Also shown in the pic is our new iPhone, or at least the box for the phone. And listed on the card is our new USVI phone number. As we will be in the BVI for a good amount of our time here, we also needed to sort out a local phone for there and we did that just before clearing out. Unfortunately, that didn’t take place until after this batch of cards was printed. Oh well, we’ll add it to the next batch. 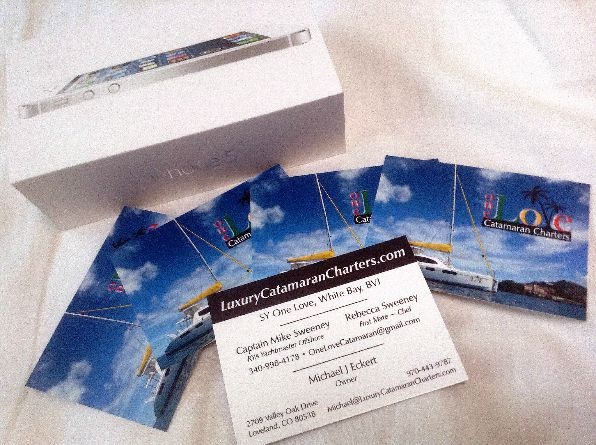 Our sexy new iPhone with data plan. I actually have it set up as a hot spot right now so that we can all access the internet here as there are no free Wi-Fi signals in this anchorage.

Want to hear a funny story about clearing our out of the BVI? I wrote last Wednesday morning how we were on the go early, moving the boat from Peter island to Road Harbor to get an inspection done as part of our name registration. Immediately after that was completed, we headed out to Cruz Bay, St. John so that we could clear in to the USVI prior to moving on to Charlotte Amalie. The wind was blowing better than 20 knots and we were quite happy to be heading in the “right” direction, downwind.

Cruz Bay has a tiny little anchorage reserved for boats to stop temporarily while clearing customs and it took us a couple of tries to get settled into a spot that we were happy with. Immediately after lowering the dinghy into the water, I went to retrieve our boat papers so that we could visit customs and immigration. It was only then that I realized that we had not cleared out of the BVI. Neither one of us even thought about it. We have never made such a silly mistake before and if it was any other place, I might have just tried to talk my way out of it. Because the islands are so close though, we decided to suck it up and motor back to Sopers Hole in the BVI, upwind, to complete the paperwork properly. That little fiasco cost us two hours of additional travel time and ended up having us arrive at our destination right at dusk, a bit later than we would have preferred. Do you think that perhaps we were a bit overtired, or was it over excited?

Now it’s time for YOU to get a new boat!

We need to find some charts