We’re in Dominica, not the Dominican Republic

Yes, the similarity of the names can be confusing, and apparently, not just to us!

“The average Dominican trying to introduce his country usually starts like this: “ I am from Dominica, not the Dominican Republic…”. Dominica has the distinct misfortune of having a similar name to a much larger country to its North. To make matters worse, nationals of both countries are referred to as Dominicans.

On his first voyage in 1492, Columbus stumbled upon the country and called it Hispaniola (Little Spain). Years later, the French occupied the western third of Hispaniola and in 1804 it was recognized by Spain as Haiti. The rest of Hispaniola was by then referred to as Santo Domingo. In 1844 that part was granted independence from Spain and became known as the Dominican Republic.

Dominica on the other hand was first named by Columbus in 1493, more than 350 years before the Dominican Republic was named. However, with almost 9 million people to Dominica’s 70,000, the Dominican Republic has come to dominate people’s view of geography and even history where the two countries are concerned.”

It has been some time since we left the Dominican Republic behind us, just under a year to be exact. We actually have three groups of friends there right now: 1 heading south towards us, 1 that will be heading west and 1 that is sadly heading north back to the US. For our buddies who are in the DR and heading south, we suggested to them that they stock up on the cheap coffee and beer available there, both of which are excellent.

If you’re going to be heading to the DR, or down island anywhere for that matter, you might want to check out the free cruising guides that are now available online for you to download. You can never have enough (free) cruising intel! 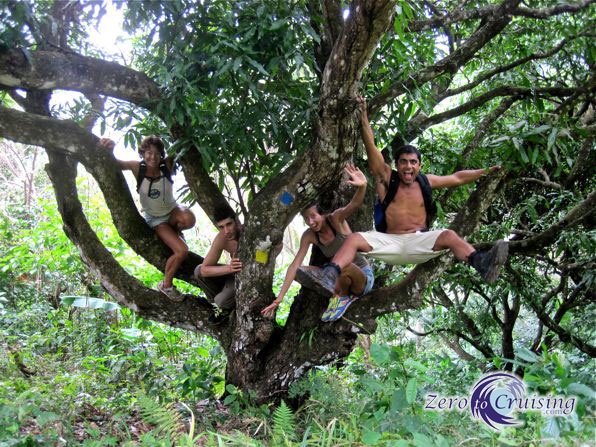 Check out the monkeys that I found in a tree while hiking yesterday!

The latest and greatest may not always be the best option.

Some reading for you, online and offline

My blood pressure is already dropping