In spite of being down here since 2010, there are still a few of the larger Caribbean islands that we have yet to set foot on. Nevis was one of them but now, our 3rd season in this area, we have checked that one off the list. Montserrat is another island that we have sailed by numerous times but have yet to stop at. Hopefully we’ll be able to rectify that situation later today. 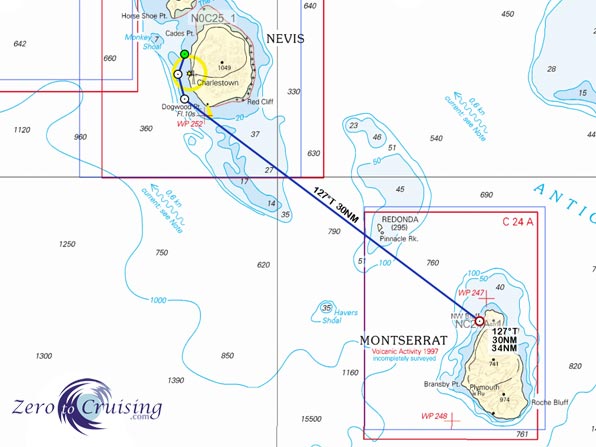 Yesterday, we checked out of Nevis with customs and immigration, removed the engine from the dinghy, and in a few moments time, will be setting sail towards Montserrat. Did you know that this island had a massive volcanic eruption as recently as 1995? This is what wikipedia has to say about it:

On 18 July 1995, the previously dormant Soufrière Hills volcano became active. Eruptions destroyed Montserrat’s Georgian era capital city of Plymouth and two-thirds of the island’s population was forced to flee. The volcanic activity continues to the present, the affected areas currently being mostly in the vicinity of Plymouth, including its docking facilities, and also on the eastern side of the island in the area around the former W. H. Bramble Airport, the remnants of which were buried by flows from volcanic activity on 11 February 2010.

An “exclusion zone” extending from the south coast of the island north to parts of the Belham Valley has been imposed because of the size of the existing volcanic dome and the resulting potential for pyroclastic activity. Visitors are generally not permitted entry into the exclusion zone, but an impressive view of the destruction of Plymouth can be seen from the top of Garibaldi Hill in Isles Bay. Relatively quiet since early 2010, the volcano continues to be closely monitored by the Montserrat Volcano Observatory.

Not all projects have to be huge to be worthwhile

We’re not going back!