There are so many little tools on boats that we cruisers take for granted. Many of these items would likely seem of little importance to those who haven’t spent a lot of time on the water. For example, the boat bucket. We first learned of this important implement during the live-aboard portion of our Fast Track to Cruising course. In that particular case, we were using the bucket to pick up sea water to wash down the anchor and bow roller, and because we lack a washdown pump on ZTC, that’s exactly the same system we use today. But that’s obviously not the only time we bust out the bucket. Every time we need a bit of sea water to wash something off, it’s there to serve.

So how is a boat bucket different from an ordinary pail? Well, assuming it’s not a fancy one sewn by hand like I wrote about here and here, typically you’ll find that a boat bucket is a plastic pail where the handle has been replaced with a length of line, which is important for a couple of reasons. The first is that the metal handles, common on buckets purchased from hardware stores, tend to rust in salt air or bend. Additionally, they have the potential to scratch the hull as they bump into it, and bump into it they will! The rope handle has another purpose though: it allows you to pick up water from deck level. On a catamaran, with steps on the stern, it’s not super difficult to get right down to the water’s surface to scoop some up, although it wouldn’t be convenient if you were on the bow. On a monohull though, with a lot of freeboard (that is the distance from the water’s surface to the deck), the rope is a necessity. 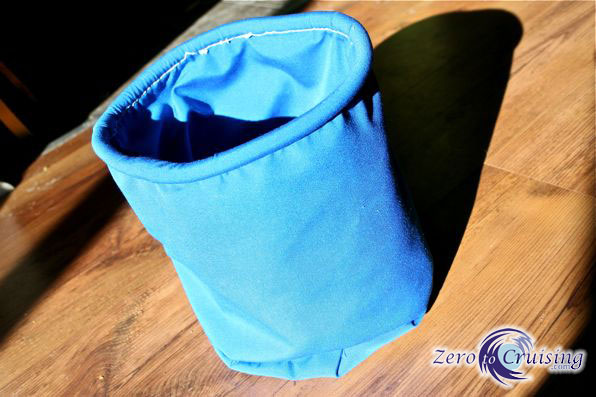 The bucket I sewed which has yet to have a line attached to it, or see water.
It does make a nice storage basket though. 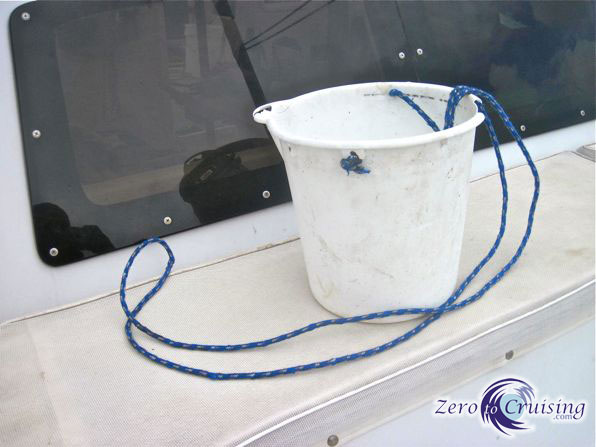 Our boat bucket, which came with the boat. It may look a little rough but has had over three years of near daily use! If you’d like something a bit more esthetically pleasing, during a quick Google search this morning I found two online stores which sell boat buckets for real money. Seriously! Search it yourself if you’re curious. Us, we’ll just stick with constructing our own. 🙂

There is a bit of a trick to the whole water-scooping process though, and even with the amount of practice that we’ve had, we still sometimes flub it, coming up with less water than we had hoped.

Warning: You should be a bit careful when trying to do this while underway at any significant speed. When the bucket fills with water, you had better be pretty well braced or you may find yourself swimming!

It couldn’t be that easy