We must really like St. Kitts. Why do I say that? Because according to the lady at the Immigration Office, we have been here for just under fifteen months!

Let’s back track a bit. We cleared out of Statia yesterday afternoon to allow us to get an early start this morning on our passage to St. Kitts. The wind was howling yesterday and we were happy to find that it had laid down considerably this morning. Although our planned passage was only 20 or so miles, the wind was going to be right on those nose, we knew that for a fact. We had to get out of the rolly Statia anchorage though and had resigned ourselves to accept the 4-5 hour motor trip to make that happen. 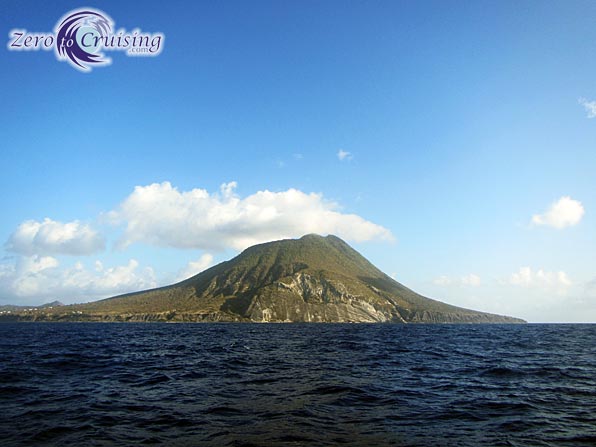 Our initial destination in St. Kitts was the capital city and port of entry, Basseterre. While the conditions were reasonably calm for the short period of time that we were in the lee of Statia, the seas promptly turned into a washing machine once we entered the passage between the two islands. What causes such a thing? Imagine a SE wind interacting with a S swell and a NW setting current, all mixing up as they wrap around the islands. Yeah, it generates a washing machine effect that Maytag could be proud of. Anyway, we had a bit of slow going through that passage as we deliberately omitted removing the outboard engine from our dinghy. Why? Because removing it from the dinghy and securing it on the rail is a fair amount of work when there is a bit of wave action. With the amount of swell that there was in Statia, it would have been ridiculous, and so we opted to leave it on the dinghy. With the engine still affixed to the tender, we can’t raise it quite as high on the davits. Without it high on the davits, we need to take our time when the conditions are bouncy. And so we did, take our time.

It was 12:00 PM exactly when we arrived at Basseterre. We found several other boats at anchor in the harbor there and we tucked in front of all of them. Remember how rolly we said Statia was? This was even worse! I swear, you could have surfed on the waves rolling into that bay. Fortunately, we knew that once we got our clearance into the country, we were good to move on to another anchorage which we were certain would be better. 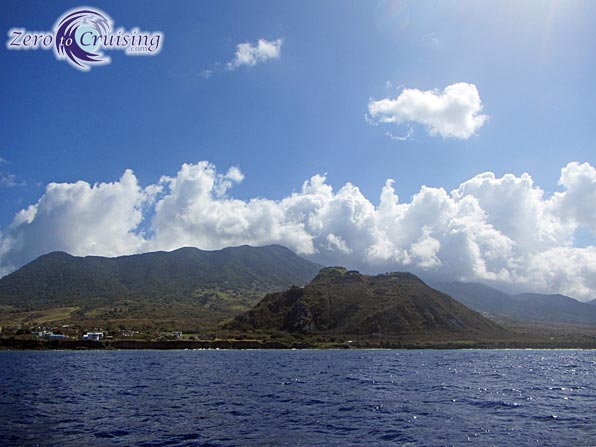 Hello St. Kitts. What fun do you have in store for us?

Clearing in to a country we’ve been to before is always easy for us. We know where to take the dinghy, where the Customs Office is, etc. etc. When we arrived at the Customs Office, which is located at the busy cruise ship terminal, we were assisted by a friendly officer who, after taking our forms and $12.00 US, checked us in. We were, however, going to have to wait a half an hour or so to see the Immigration Officer as she was not available. No problem, we thought, we’d use that time to run to the Digicel office to purchase a sim card for our phone. When we returned from our shopping excursion and went to the office across the hall that we were told to visit, we were informed that the person we needed to see was, once again, gone. And so we waited, again, in the nicely air conditioned office. After 15 minutes passed, a gentleman came in and after taking one of our forms and $17.00 US, told us we were good to go. When I asked about stamping our passports, he said we needed to speak to Immigration. What? You mean you’re not Immigration? Nope, he was the Port Captain. Immigration is back across the hall. So, back across the hall to office number 1 again which is now occupied by, you guessed it, the Immigration Officer. What’s your boat name she asked. When we told her she said, oh yes, you never cleared out that last time you were here. Huh? According to her, we’d been in the country for going on fifteen months!

When presented with this, I immediately recalled the situation when we cleared out of St. Kitts the last time we visited. We met with the Customs Officer and did all the stuff that he required. Unfortunately, the Immigration Officer was not in the office at that time so he said, no problem, I’ll just leave your form on her desk. Well, apparently that didn’t work! In spite of this, the lady was nice enough to us. She could have given us a hard time but didn’t. We will make sure that we get everyone to sign off on our stuff before we depart this time though.

With paperwork done we couldn’t hurry back to our boat fast enough. We just had to raise anchor and get out of that crazy harbor. Our destination was five miles away in White House Bay, a spot which I knew would be infinitely more protected. It was 3:00 PM when we got underway and the motor trip there was reasonably calm. Several of the boats we saw in Basseterre had already made their way there. Apparently we’re not the only ones who know how to read a nautical chart. I’m happy to report that White House Bay is, by comparison, a mill pond, and in addition to that, we’re blessed by nice, fast and free Wi-Fi. What more can we ask for?

One benefit to living on land…