My thoughts on the Ketch rig

Continuing with my unplanned theme of sails this week (both yesterday’s post, and the one from the day before, had to do with sails, or sailing), I think I’d like to talk about the Ketch rig. Since we purchased our Amel a year ago July, we have been asked our opinion of the Ketch rig by many people, both how we like it, and how we use it. Until now, my answer has always been that we don’t really know much about it, that we are just figuring it out. Now, 16 months later, I feel that I can at least start to render an opinion.

To get the novices reading this up to speed, a Ketch is a two-masted vessel where the rearmost mast is shorter than the forward one, and is positioned in front of the rudder. If the rearmost mast is as tall, or taller than the foremast, the vessel is Schooner rigged. If the shorter rear mast is aft of the rudder, the boat is considered a Yawl. That said, almost all Amels are ketch rigged, so obviously the designer, Henri Amel, thought that there was some benefit to this particular rigging setup.

What advantages was he considering? Was it speed? No, I don’t think so. As I understand it, the basic idea behind a Ketch rig is that the sail plan of the boat can be spread out over two, smaller, more-manageable sections, as opposed to a Sloop, a single-masted boat with one large mainsail. His belief was that this configuration would be easier for a short-handed crew, a cruising couple, to deal with. Now with some experience behind us, we tend to agree. 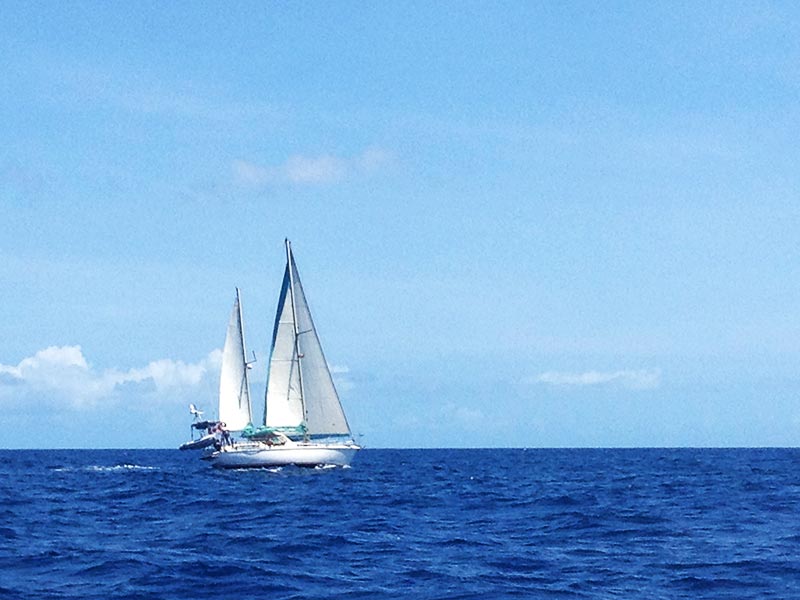 Frost under sail towards Carriacou. Photo courtesy of our friend Dirk on Evening Ebb.
Note that Evening Ebb is also a Ketch!

Surprisingly to us, many owners of Ketch rigged boats tell us that they hardly ever use their mizzen, the rear sail. In fact, a new friend of ours has even removed it from his boat to save weight! I know that on the newer Amels the mizzen does not have electric furling as the mainsail and the genoa do, making it a bit more of a hassle to deal with, relatively speaking, but still, it can be handled quite easily from the safety of the center cockpit, so why not use it?

Well, one reason that people don’t use it is that they say it doesn’t affect the performance of the boat very much. This, I have tried to come to grips with. We almost always have our mizzen raised, and in fact, it’s the first sail we typically put up, and do so before we even raise anchor. Our boat also sails quite well, even to weather (towards the wind), with just the mizzen and genoa (some people refer to this sail configuration as jib and jigger).

We have been told that when sailing close hauled, that is, as close to the wind as a boat can point, the mizzen is actually a hindrance, assuming that the main is up too. The thought is that the mizzen gets backwinded, and actually slows the boat down. Always willing to experiment, during our last passage from St. Lucia to Martinique, as we were sailing close hauled, I actually dropped the mizzen, wanting to see if lowering it would have any effect. It didn’t, which does not support the theory that it was slowing us down, but nor does it show that it was helping us in any way!

I’ve also heard that the mizzen is not beneficial when sailing down wind, that it kicks the stern around too much. This may be true, I don’t know. If I ever find myself in a position to sail down wind, something that almost never happens here in the Caribbean, perhaps I’ll do a test to confirm or refute this.  🙂

Two other uses for the rear mast: 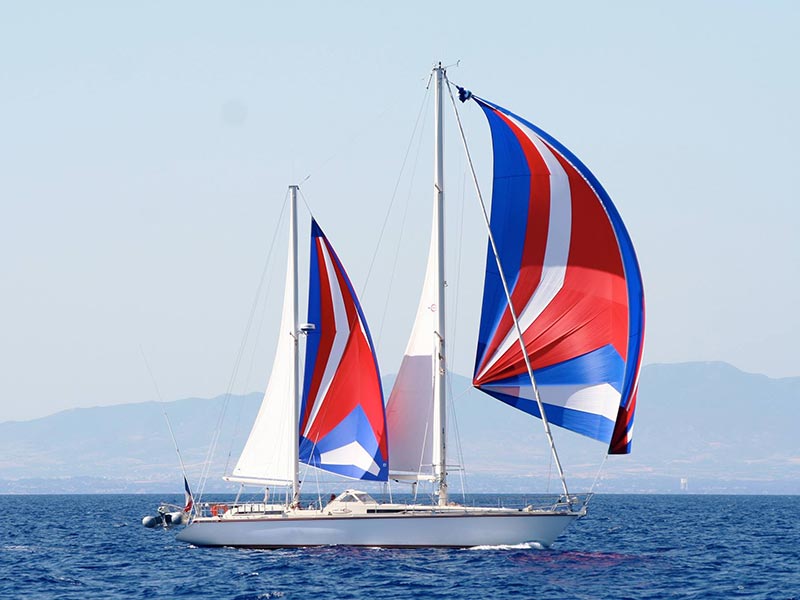 I’m not sure who this Amel belongs to, but it is beautiful!
If this is your boat, please let me know and I’ll edit the post to give you credit.

Recently we had someone comment on a photo of our boat on Facebook, saying that the Ketch was a poor rig choice, that a cutter would be better. Not interested in engaging in another pointless internet argument with some anonymous guy, I simply replied that we are all entitled to our opinion. Obviously Henri Amel, the designer of our boat, felt differently than this fellow. And given the number of Amels here in Martinique, and also Ketch rigged boats from other designers (we are surrounded!), I’d say that there are a great number of people who feel differently!