I’m normally a bit more prompt in getting passage reports online but with all of its good points, St. Martin, where we are now holed up, remains the black hole of the internet world. We spent 60 minutes in a Burger King just to get yesterday’s pics online! Anyway…

As I noted in our post about Grenadian tradesmen, we set sail from Grenada at 6:30 AM on Friday. Yes, I know that beginning a passage on a Friday is considered by some to be bad luck but so is carrying bananas on board, and whistling, and for that matter, having a woman on board! As you might have guessed, we are not superstitious.

Our course from Grenada to St. Martin was almost straight north and if traveling there directly, the rhumb line misses all of the islands. With the wind forecasted to blow straight out of the east, we hoped for a nice easy reach all the way there. In general, we were not disappointed.

While motoring a bit to get clear of Grenada’s wind shadow, we had a brief visit by a few dolphins. That is always a good sign and I think cancels out any Friday departure bad juju. Wouldn’t you agree?

We had a bit of a technical glitch when we first started, noting that the AIS data from our Vesper black box was not displaying on our chartplotter. It had been working the day before but for some reason had now stopped. As we were still within range, I gave our friendly neighborhood Raymarine tech Sheldon a phone call and with a couple of suggestions from him on what to check, I was able to get it working as it should. Some people did note that they could not see our boat displayed on AIS tracking sites. I believe that was due to the fact that I inadvertently had it switched to “silent mode” where we still receive and display data but do not transmit our own. Later in the passage I realized my error and corrected that.

The weather remained good for all of the first day and we enjoyed alternating between working on our all-over tans and hiding in the shade. Although we could see squalls around us, we were fortunate to miss them all entirely. 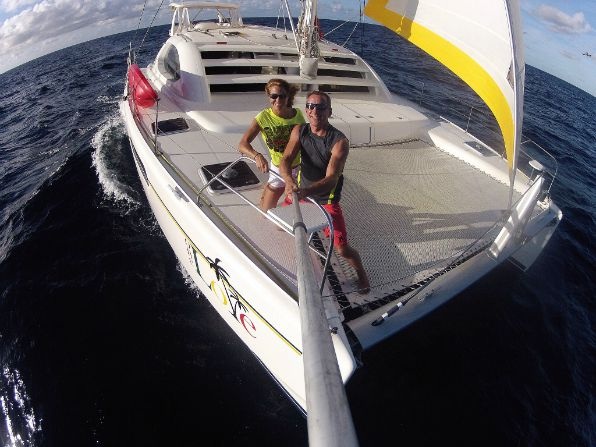 I actually put a shirt on for this pic!

You may have heard that in order to get “clean” air, wind unaffected by a land mass, you must be 7 times the height of the land away from it. In other words, if the mountains on an island are 1 mile high, you need to be 7 miles offshore to get clean air. I don’t know who came up with that but I will tell you the fact is that even 60 miles offshore the wind and seas are noticeably affected by the land. As we transited the area in the lee of the islands, as I said, even 40, 50 and 60 miles offshore, we still had a drastic reduction in wind and a lessening of the waves. We’ve experienced this on each of our previous passages too. Strange, but fact.

One might think that being so far offshore, with virtually no other boat traffic around, ending up on a collision course with a ship would be pretty unlikely. It is unlikely but it still happened. When I came up from below to relieve Rebecca on one of her night watch shifts, I found the AIS displaying two ships in our area. They were still some 15 miles or so away from us but required monitoring. As we drew closer it became apparent that if nothing changed, we were going to come dangerously close to one of the tankers, if not run right into it. Although we were clearly the stand on vessel, I conceded to the law of gross tonnage and made a significant course correction to go behind the fast-moving behemoth. Our AIS unit paid for itself in that one single incident!

Although we fished for the entire first day, it wasn’t until the morning of the second day that we had a strike. We could see a flock of birds actively feeding up ahead, always a good sign for fishing. Sure enough, as we neared the area where they were, the line started running off our hand reel. The fish put up a significant fight but I was still able to bring him alongside and secure him with our yet-to-be-used gaff. We had hoped that the fish would be a Mahi Mahi (Dorado) but as it turns out, it was a tuna. Rebecca cleaned and filleted the fish and less than an hour later we were having tuna sashimi for lunch. It doesn’t get much more fresh than that!

Note: This is the first fish landed on the Leopard. The last fish Rebecca and I caught was on ZTC, coincidentally on this very same passage. That fish was a massive billfish. We were both much happier to land a more manageable-sized fish this time around.

Other than being buzzed by a very low-flying plane in the middle of nowhere (I wonder if they got any pics of us), the rest of the day remained uneventful. That is, until part way through one of my off-watch naps when I was awoken by the sound of our head sail loudly flogging. As I rushed up on deck to see what was up, Rebecca was working to get the boat back under control. For some reason our auto pilot had made a huge shift off course, putting us into the wind. After getting the boat back on course we found that we could no longer get the auto pilot to track. Strange. Coincidentally, we had now entered an area full of squalls and even worse, more electrical activity (lightning) than I have seen in ages. I don’t like lightning at any times but I really don’t like it when I’m standing at the helm holding onto a metal steering wheel. What can you do though other than carry on?

The last 10 hours of the passage Rebecca and I spent at the helm together, alternating hand steering and napping in 15 minute shifts. As dawn broke we found ourselves rounding the western corner of St. Martin, safe but tired. One Love’s anchor was shortly thereafter set in the nice sandy bottom of St. Martin’s Marigot Bay, almost exactly 48 hours from the time that we left Grenada. Doing the math that puts our average speed at around 8 knots, not bad considering we had a reef in the main sail the entire way.

Would we want to do that passage again tomorrow? Hell no. It is definitely a lot faster and easier than island-hopping our way north though and I would dare say, a lot safer too. Having a nice seaworthy boat like One Love makes the passage that much easier, and enjoyable.

Oh, how did Bob, our tender, ride on our structurally reinforced davits? Perfectly. In fact, even though the seas were still a bit bumpy at times, the dinghy didn’t move an inch. That passage was a perfect test of our new system and in my opinion, it passed with flying colors. Compared to this trip, jogging around the Virgin Islands will be a cake walk. 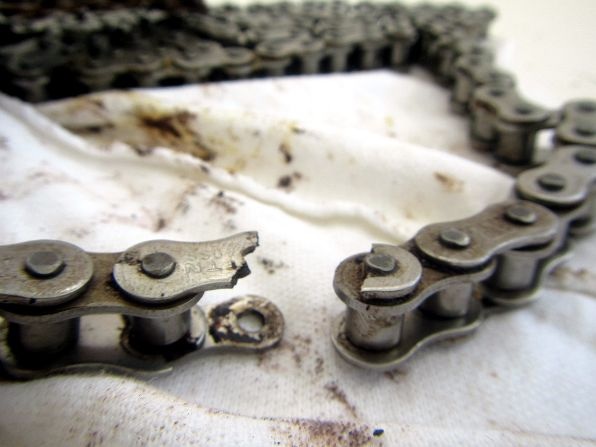 Why the auto pilot ceased functioning.

Not all fun and games