Sometimes I think that manufacturers, in their misguided attempt to protect the less-smart members of our society, implement “features” that are not so well thought out, sometimes with potentially dangerous consequences. An example of this on our boat would be the inability to operate the electric anchor windlass without the port engine alternator running. I first mentioned our run-in with this feature back in March but we recently had it rear up and bite us again while on charter. How did it come about?

A couple of weeks ago, while motoring east up the Sir Francis Drake Channel, our port engine tachometer dropped to zero and the engine charging alarms came on to signal that the engine was not charging. I initially thought that the engine had stalled but when I backed off the throttles, I could see that it was in fact still running. I asked Rebecca to open the hatch to inspect the engine and she reported back that she could see coolant all over the bottom of the locker. We immediately killed the engine and swapped places, her taking control of the helm while I went to check out the engine. Almost immediately I noticed that the lid from the coolant overflow bottle had come off. Assuming that that was the problem, I topped the coolant bottle back up and replaced it, hoping that all would again be well. When we restarted the engine we saw that it wasn’t. While the engine would start, the tach was still reading zero and the charging alarms were still on. Off again went the engine.

Back in the engine locker and no longer distracted by the coolant, I could then see that the alternator belt had shredded itself. That had to be the problem! Fortunately, I had a spare (several, actually) but rather than fix it while underway, I figured that we’d continue to our destination using only one engine and make the repair after we anchored. Can you guess where this is going?

A short time later, as we neared the entrance to the bay that we planned to stop at, I asked Rebecca to ready the anchor to drop just in case we experienced any drama while navigating behind the bay’s barrier reef. As soon as she tried to do so and it failed to work, we both remembered about the port alternator and how it was somehow linked to the windlass. No alternator, no windlass.

Now, a friend of mine told us that if we simply turned the key part way on that the windlass would work. Nope, it wouldn’t. I even briefly tried to see if it would work with the engine running. Nope. No alternator, no windlass.

OK, so if we couldn’t power down the anchor, I’d let it free fall. Unfortunately, I couldn’t get that to work either. Obviously that is a totally separate issue but it did force our hand, we’d have to switch the belt before entering the bay.

With the help of one of our guests, Ron, an experienced mechanic, I swapped the belt in relatively short order while Rebecca slowly piloted the boat around in a large circle. Once it was switched and the alternator started turning again, all was right again in the world: the tach started working again, the warning lights and alarms went out and the windlass started functioning as it should. 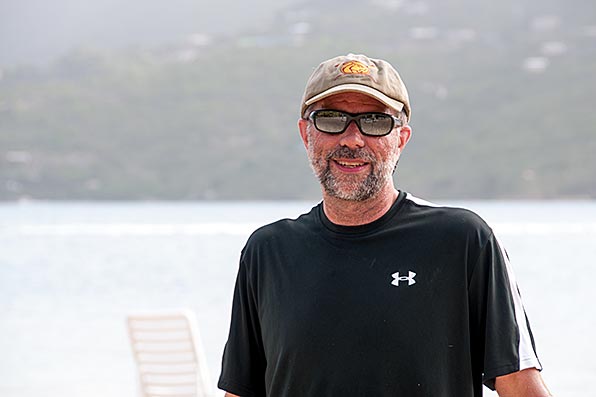 Thanks to our “assistant mechanic,” Ron.

All’s well that end’s well, right? Wrong. That stupid feature is, in my opinion, extremely dangerous! In shallow waters dropping the anchor is one of the first actions to implement when you experience engine failure. While this situation turned out OK, what if we had lost both engines while on a lee shore in bad weather? Some might say that we could raise sail and that’s true but IMO, that is not the first course of action to take.

Since this occurred, I have had that feature bypassed. In the comments on the post I linked above, you can read how others have done the same. I also spoke to some friends of ours who operate 4600’s and they too have had it bypassed. Will we be stupid and run the windlass without the engine running? Of course not! I do, however, want to be able to drop that anchor whenever I need to, regardless of the state of our engine’s charging system.

Everyone is fighting a battle