Some time ago, while visiting friends in Montreal, Rebecca and I had the opportunity to attend an after-hours dance club where a fairly famous DJ was playing that evening. Our friends only had to tell us once that the challenge was to stay up all night, dancing from the time the bars closed until the next morning at 11:00 AM when they reopened, for us to be all over it. I bring that up only to reinforce just how competitive Rebecca and I can be when it comes to challenges. And it was in this same vain that we accepted the self-imposed challenge to complete a 24 hour or so sail from Bimini to Nassau, ongoing at the time I am writing this.

After our passage from Florida to Bimini, several people commented that we were now officially blue-water cruisers. Cruisers perhaps, but in our minds at least, after motor-bashing our way across the gulf stream, we had yet to earn the blue water “sailor” badge. Until today! Although most of the people in Alice Town stayed put yesterday, we, for the 2nd time, braved the sketchy channel there and at 12:00 PM, had poked our nose out into the ocean. What we found was again, some substantial wind and waves, but this time, on our stern, a much more favorable direction. We immediately raised our Genoa and have been sailing ever since. 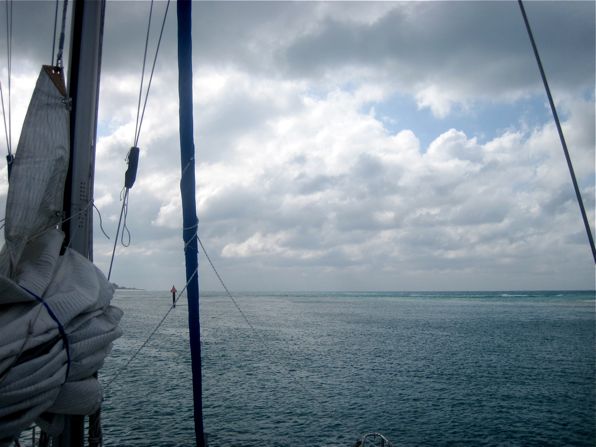 About to head out the Bimini channel. This time Rebecca piloted us out through the big waves. 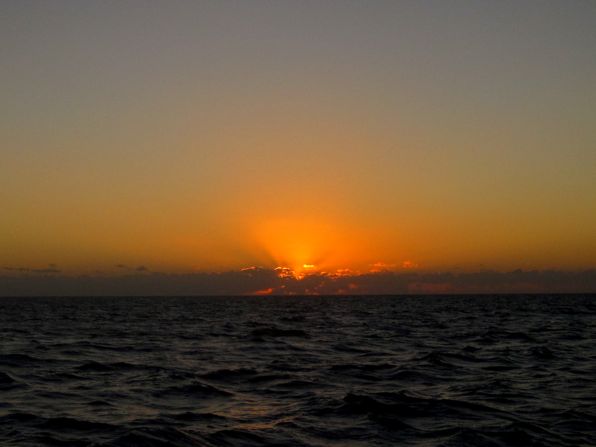 No, we never get bored of sunsets while underway.

We had multiple options ready for yesterday, including moving as little as a couple of miles to another anchorage at South Bimini. The farthest of our travel options was to head all the way to Nassau, which would make this by far the longest passage we have made, not to mention the farthest we have SAILED!

After making the almost 90 degree turn around South Bimini and onto the shallow water of the Bahamas Banks, the waves laid down for us and we proceeded to have a beautiful sail. It is truly amazing to be surrounded by water in every direction, all of it emerald green and none that is more than 10-12 feet deep. Just as in our passage to Bimini though, we were the only boat on the water, save for the odd commercial tanker. That’s too bad for those waiting there for weather because it has turned out to be perfect!

What have we been doing with ourselves while water bound? Well, we finally had the opportunity to test out our new watermaker and I am happy to report that it performed perfectly. We now have a nice 5-gallon jerry can of beautiful salt-free water. I am confident that this device will be a huge asset for us in our future travels. 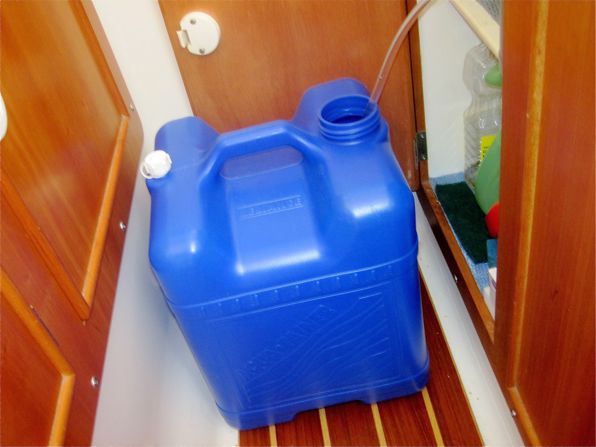 Our watermaker output is diverted into this jerry can. 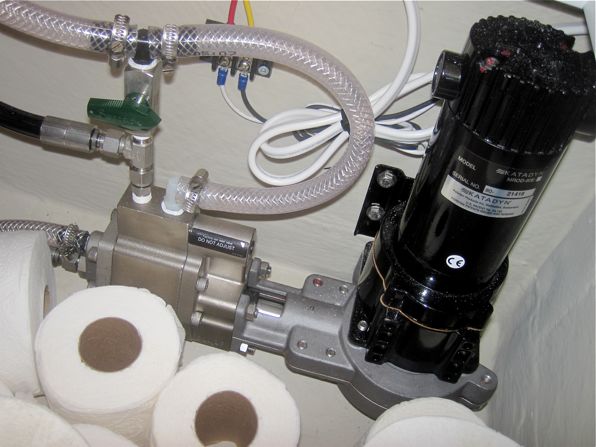 The watermaker’s high-pressure pump working away. Yes, we store toilet paper all around it. We’ll sure know if there’s a leak pretty easily! 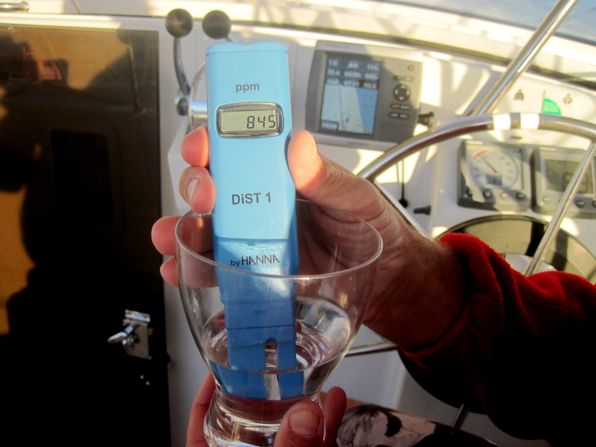 Testing salinity, before diverting it to the jerry can. We also do this at the end of the production run. If it tests properly at both times, it can be added to the main water storage tank.

We had a special treat early this morning as we sailed across the Bahamas Banks: a full lunar eclipse. Although much of North America would also witness this celestial event, I can’t think of too many places that would be better to view it than from a sailboat, while sailing across the shallow water of the banks. 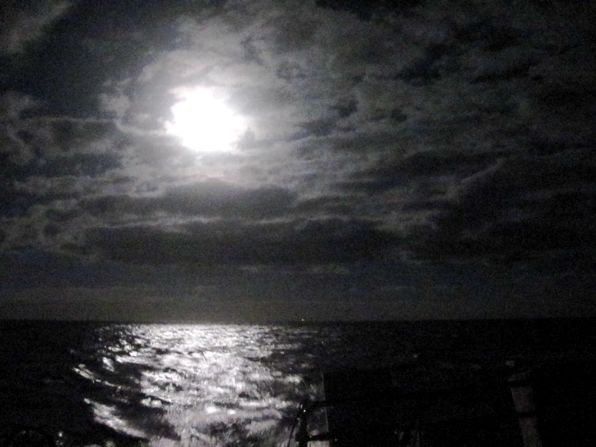 It’s pretty tough to take a low-light photo while underway in a moving boat. 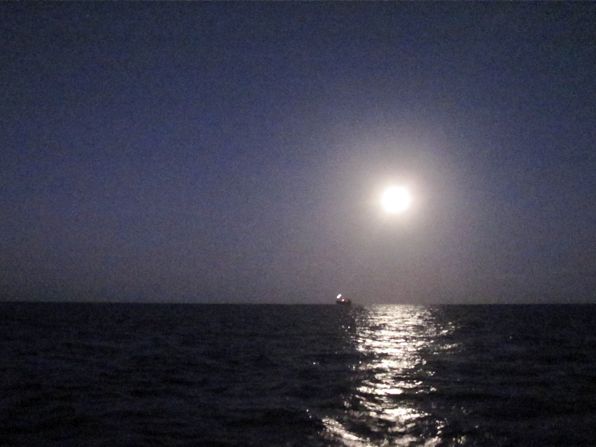 What I saw just after I awoke from taking a nap. Beautiful!

Any problems? Well, there was an unintentional offering to Poseidon of one of our two winch handles. This is a pretty crucial piece of kit for a sailboat and now that we only have one left on board, we are holding onto it like crazy. We’ll be sure to pick up 2 more when we get to Nassau. I also managed to break to leech cord on our headsail. It may have been chafed through when we tore the sail the other day. When I pulled on it to tighten it down while sailing, it just came free. Yes, I’ll admit it, it was me who was responsible for both of those two issues!

While typing this, I am listening to the weather forecast being relayed on our SSB/Ham radio and it sure doesn’t sound great for anyone waiting to cross to the Bahamas. As much as we got beat up a bit during our crossing, I’m so so glad that we did it while the opportunity was there. I hope a window does present itself just after Christmas so our friends on Knot Tide Down and Cara Mia can get over here and join us.

Update: Sadly at 10:00 AM Tuesday, the wind left us and we sat bobbing in the swells. Had we continued on with our sailing-only plan, we would not have been able to make it to Nassau until well after dark, a not-so-safe proposition. The engines, once fired up, did their jobs and hurried us along, such that we could make it to our marina slip (yes, another marina) at 2:30 PM. 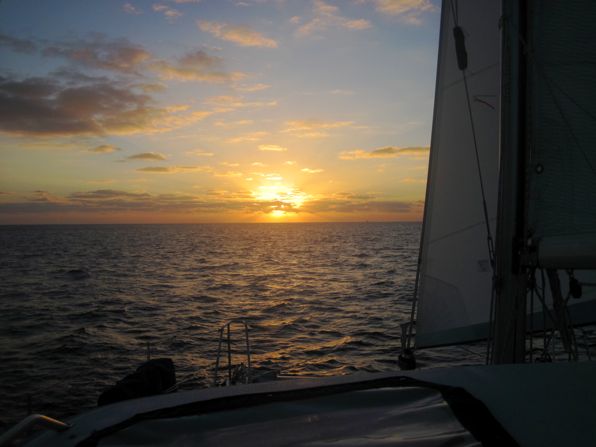 Mainsail up and cruising along, shortly before the wind died on us.

We give thanks everyday