After re-provisioning back in Kingston we shed the dock lines and once again made way to Amherst Island. It was mid-afternoon by this time and because it was a long weekend we felt that we would have a better chance getting a spot at the larger Kerr Bay as opposed to Stella Bay. Because of our last post about textbook-perfect anchoring it seems only fitting that we be the ones on display this time, with more than a dozen boats alongside for the show. We made the mistake of getting our sights set on our previous anchoring spot but after dropping the hook and backing up a bit we realized we would be too close to some of the others, especially two monohulls rafted up (pay attention to those two as they will be made famous later in this post). Our second attempt was much more successful and with time to look at the big picture was a much better choice of location. Where to anchor seems so obvious once you are there, but when approaching the anchorage those large spots don’t seem quite so apparent. Regardless, we let out plenty of rode and set the anchor bridle as David taught us. Now it’s time to chill out! 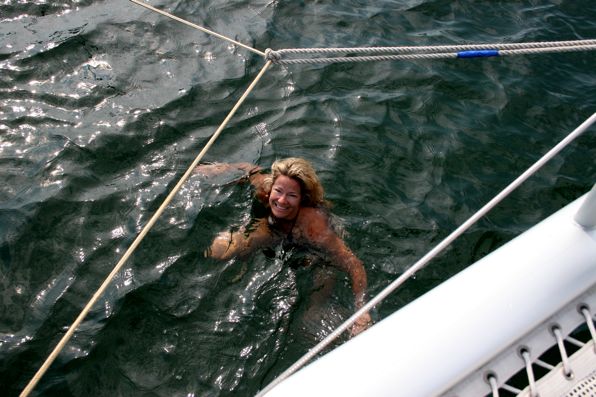 Anchor bridle between the two hulls.

The weather was forecast to bring strong winds overnight and for once the weatherman was dead on. But not before a very weird period late in the afternoon when the wind almost died. The strange part about this time is that the boats in the Bay were all moving around, facing random directions. As I know there are people reading this who are not up to speed on the whole anchoring process, boats tend to all align themselves to face the same direction, bow (front of the boat) into the wind. The anchors are mainly designed to work in that direction so when you look for a spot to anchor you need to know which way the wind is coming from, but also what direction it is expected to change to, if it will change direction at all. If anyone was to have arrived at this strange time they would have had absolutely no idea. There were boats in close proximity to one another pointing in all four major compass directions. Weird.

Early in the morning I woke up to the noise of the wind easily gusting over 20 knots. Our boat was holding fine but the wind had clocked to a point where if we dragged anchor we would end up hitting another boat a little ways behind us. Everything looked OK so I went back to bed. More strong gusts woke me up again though and this time I decided to stay up and sleep in the salon. That lasted a while until some commotion from a nearby boat had me awake and in the cockpit. The two boats previously mentioned had dragged and were right on top of a nice pilot-house cruiser. The owners of the other boat were fending off and banging on the other boat, trying to wake them up. No luck. This pair of boats proceed to drift almost out of the bay, but not before almost hitting three other boats. In each case the boat in danger’s owners fended off but all this time the people in the drifting boats appeared unaware. Finally and fortunately, before they did end up in the middle of Lake Ontario, they managed to wake up, start their engines and make it back to safety. Too much excitement. Rebecca and I spent the rest of the morning curled up on the salon benches.

After that night’s bit of fun I felt maybe this was fate’s joke on me because of our last Blog post. I guess we had better not get too cocky!

It was raining Sunday morning and not wanting to pass up an opportunity, Rebecca and I washed the boat. Plenty of scrubbing and a nice fresh-water rinse got rid of some of those #@#$% spiders. I have always had a thing against spiders, ever since I was a kid. It is quite unfortunate that having chosen to spend my time on the water, spiders obviously love boats!

Another great thing to do in the rain? Take a shower. Armed with our biodegradable soap Rebecca and I washed up on the trampoline and rinsed off by jumping in the lake. Chilly but effective. 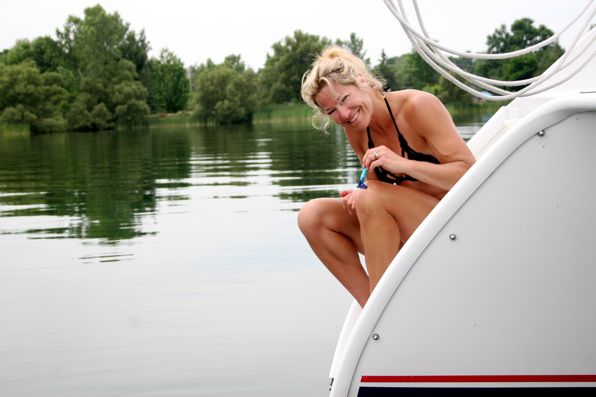 What a great place to shave your legs!

The weather ultimately cleared up and we were able to spend a suitable vacation-type day, lounging in the sun. 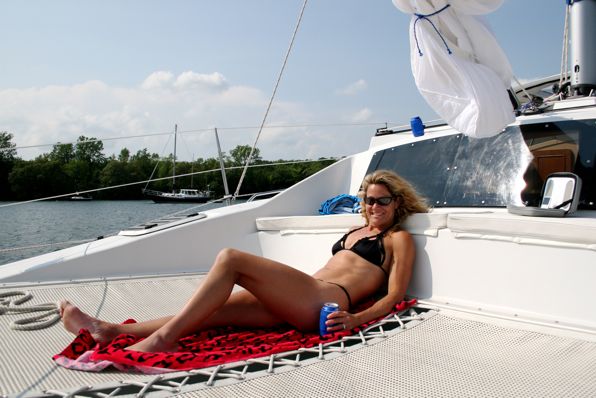 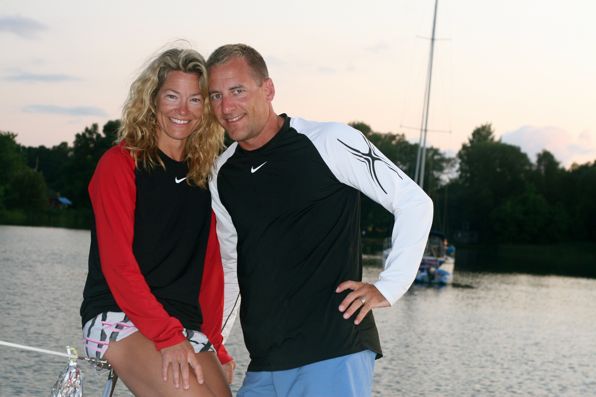 Our Nike sponsorship photo. Note: Be careful when running on a boat to get your photo taken when your camera is set on a 10 second timer!