They say that it’s bad luck to begin a passage on a Friday. If that’s true, I’d have to assume that commencing one on Friday the 13th, yesterday, would have been extra bad, right? Well, we’re not suspicious, and even if we were, it was our belief that moving the boat from St. Anne back into Le Marin couldn’t hardly be considered a true passage. When I got around to doing my normal pre-passage engine checks though, I started to have second thoughts! 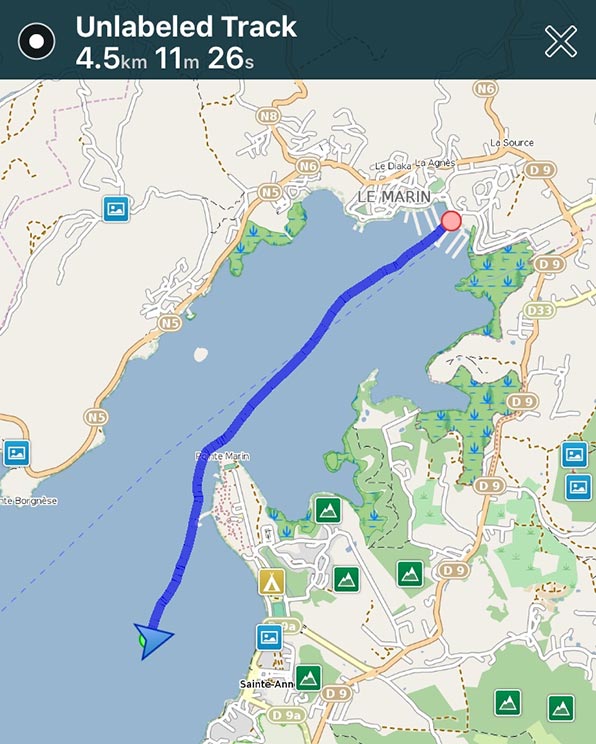 When we dinghied in to get some groceries the other day, I recorded this track using the iOS app that I recommended here. It’s similar to the track that we moved the boat yesterday.

Ready to check the oil, coolant, and make sure nothing was amiss, I popped down into the engine room. When I did so, I was given a bit of a start by the fact the there was considerable water in the engine bilge. When I say considerable, I mean up over top of the deep area of the bilge, and pooling just below the stuffing box. Under no circumstances could that be good!

Because of its location, my first (scary) thought was that the water was coming in through the stuffing box. Rebecca quickly reminded me that we had been operating our washing machine the day before, doing laundry, and she recalled that the bilge alarm/pump didn’t go on automatically as it normally does (the washing machine pumps the discharge water into the bilge, not ideal, but for the time being, it is what it is).

When we first purchased Frost, one of the things that drove me crazy was the fact that the electric bilge pump did not turn on automatically. A high water alarm would sound if the bilge filled up, but the pump would have to be switched on manually. That’s all well and fine if you’re on the boat, but what if you weren’t? Our electrician friend Simon was able to fix that with a small wiring alteration, and for the last little while, we have enjoyed having the pump turn on automatically when the alarm sounded. Something was obviously amiss though, preventing that from happening.

We first determined that the bilge pumps, both electric and manual, were working, and got rid of the standing water. When I studied the system, I was able to get the alarm/pump to operate via the float, but only intermittently. I definitely didn’t fix the problem, and that remains a priority. Unfortunately, it’s not in a convenient, or comfortable place to work, right up in front of the engine. It’s a spot for small, flexible, non-claustrophobic people only! As a stop gap until I do get it repaired, I installed one of these backup water detectors

that were recommended by our friend Jason on Two Fish. They are available from Amazon for very little money, run off a 9V battery, have a remote sensor that you can place up to 6′ away from the alarm unit, and they are very loud! If you’re a boater, I’d definitely recommend picking up a couple. 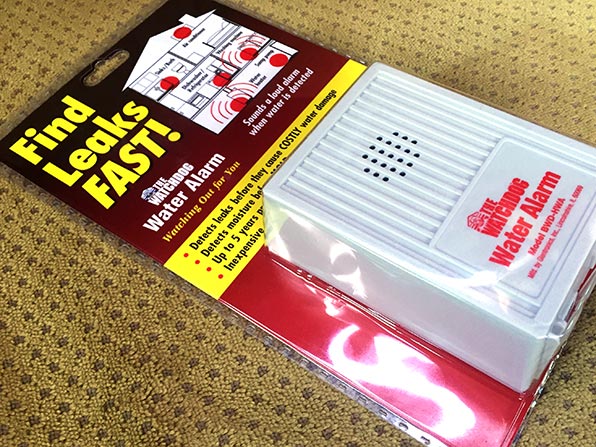 These are available from Amazon for very little money, run off a 9V battery, have a remote sensor that you can place several feet away from the alarm unit, and they are very loud! 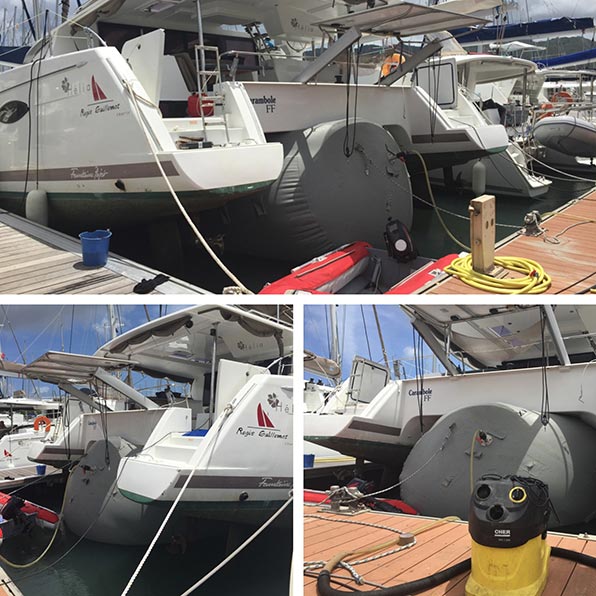 If your boat was sinking, wouldn’t it be cool to have one of these? Inflated with a simple shop vac, it was strong enough to lift the stern of this 44′ cat high enough out of the water so that both sail drives were accessible.

The talk of the town