Rigging Modern Anchors – a must-have for your library

Here’s something of interest for our cruising friends: I just found out that our sailing friend, Drew Frye, has a new book on the market called Rigging Modern Anchors. While I have yet to hold a copy in my hands, I know the depth of research that Drew puts into his work (he has written several other books and is frequently published trade magazines such as Practical Sailor) so I am confident that this text will be a must-have for those who spend any time off the dock. 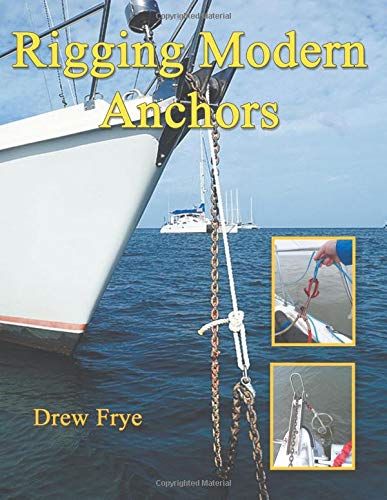 Here is the synopsis from Amazon:

Rigging Modern Anchors demystifies anchoring with today’s modern anchors. Through years of systematic testing, Drew Frye has produced a new benchmark of understanding based on empirical data instead of anecdotal wisdom, passed down from one sailor to the next without proof or deep understanding of the fundamental concepts involved. In Rigging Modern Anchors, we dig deeply into the how and why of anchoring, using hard numbers as our foundation. Included are in-depth discussions of anchoring basics, loads, scope, and the effects of cyclical loading, soil consolidation, and bottom characteristics, on holding power. Special attention is given to problem bottoms such as very soft mud and rock. There are anchor-specific observations, discussions of tandem anchors and rigging methods, plus an extensive appendix containing test data, open source designs for bridle plates and anchor turners, strength and toughness for various chain types, anchor connector recommendations, anchor sizing guides and more. Proper anchoring technique, rigging, and gear selection are vital to the safety of ship and crew. Instead of hoping your anchor and rigging scheme will hold, read Rigging Modern Anchors and be sure.

By the way, do you recognize the book’s cover photo? If not, maybe this will help.

Leave it on or take it off?

We need some rust remover