Our last two nights were spent on a mooring at the base of the Pitons in St. Lucia. There are two of these mountains, described as volcanic plugs in wikipedia, Gros Piton to our south and Petit Piton to our north. Unlike how they are depicted on the bottles of St. Lucia’s domestic beer, the two mountains are very similar in height. One thing that is quite different is the trail that one follows in order to summit the peaks. Climbing Gros Piton, which we have yet to do, is reportedly a very long walk, primarily up man-made steps. The trail is quite organized there and you are required to pay a guide to take you (we hear the guides are all official and wear uniformed shirts to show that they’re part of the program). 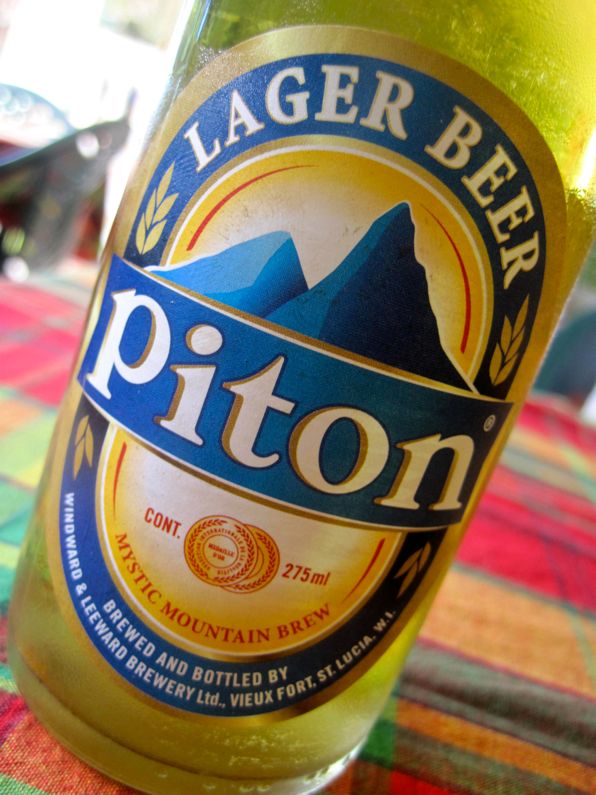 Petit Piton is an altogether different animal. The trail to the summit is reportedly much more difficult. All of the boat boys are eager to guide you to the top but they want $$$ to do so. We instead wanted to do it ourselves and thus pay no one any $$$. The challenge was getting started.

After one false start trying to find the trail, we ultimately paid a barefoot Rastarfarian guide, appropriately named Bushman, to take us to the trailhead. It’s a good thing we did too because we never would have found it on our own! Bushman told us that he had been guiding people there for 20 years and respectfully pointed out the sign to his “teacher’s” business, saying that he was the man who taught him to be a guide. 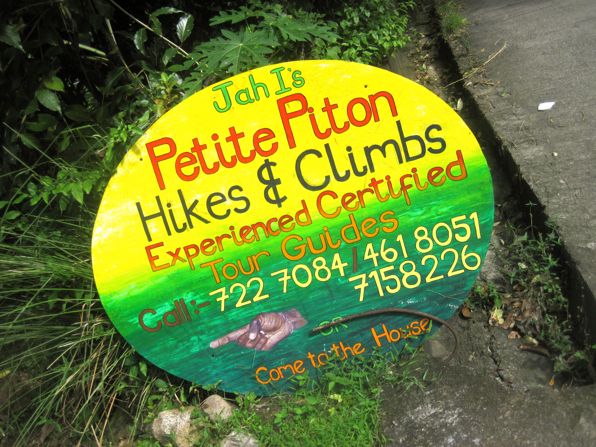 He gave us 3 pieces of advice:

The first two were obvious and the third one would become so as the morning progressed.

The trail was much like climbing a ladder where both hands and feet were required on the various rocks and roots. It was in quite good condition and we estimated that it gets climbed maybe a couple of times per week. The final 400m or so was very steep and there were numerous ropes strung out to assist you up the sheer rocks. Although I don’t like trusting “mystery” ropes that have been left out in the elements to degrade and chafe on rocks, we really had no choice but to commit our weight to them in several of the locations. When we reached the rabbit hole we were happy that none of us were too large around the middle because that would have proven to be very problematic! 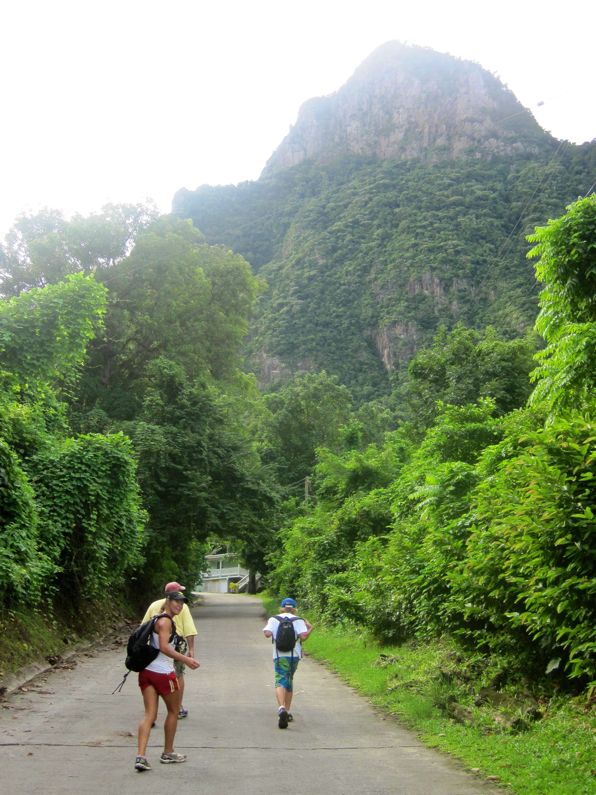 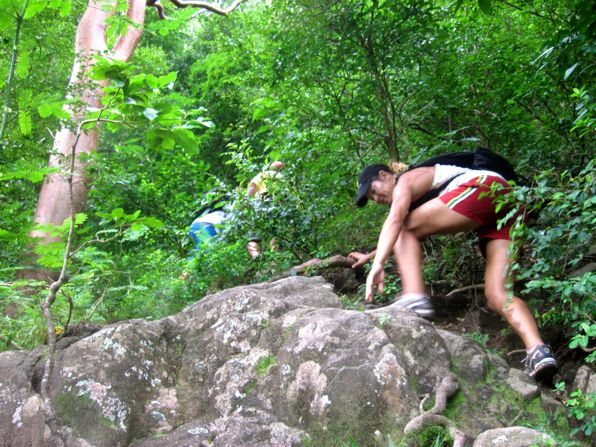 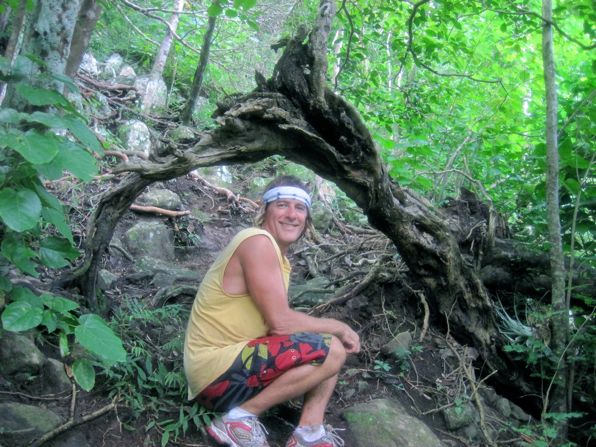 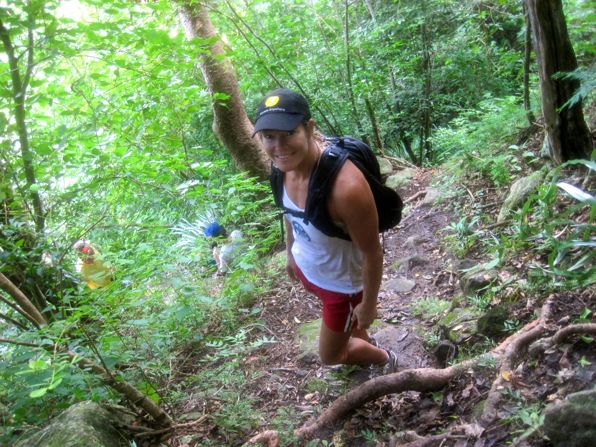 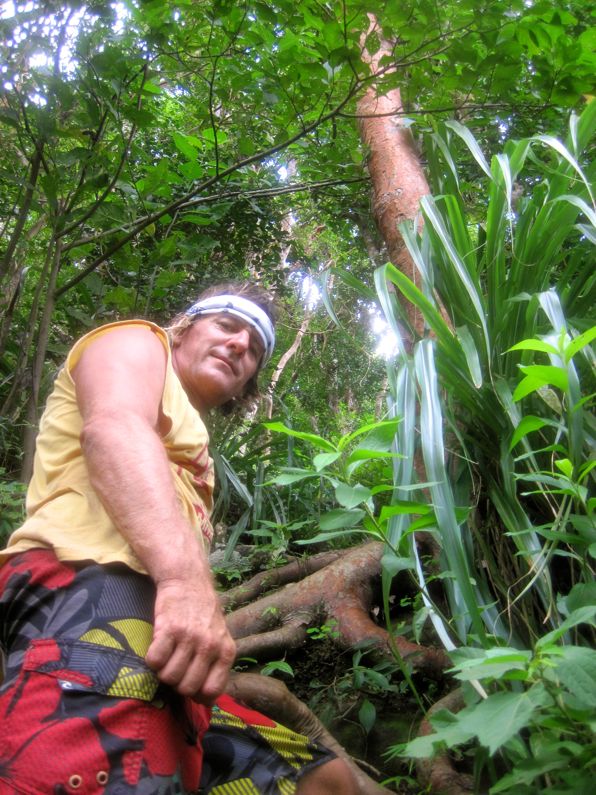 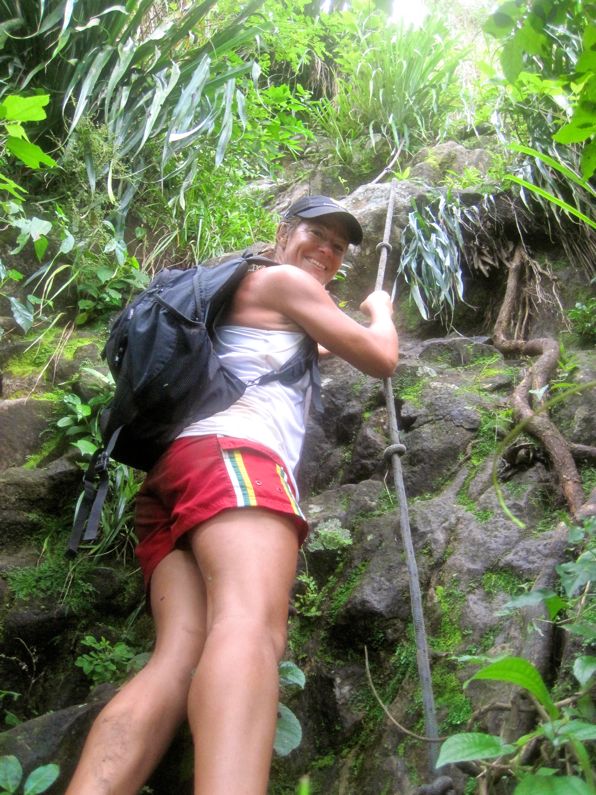 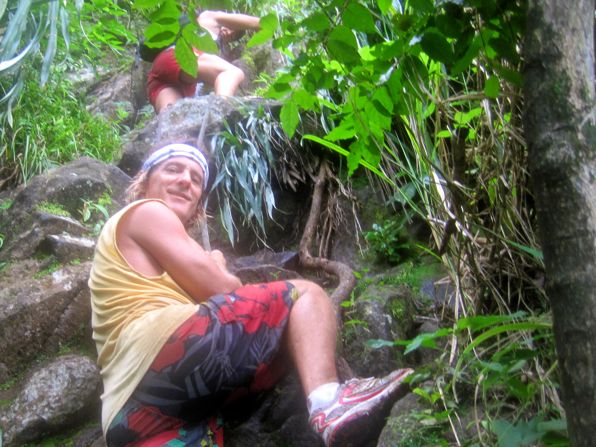 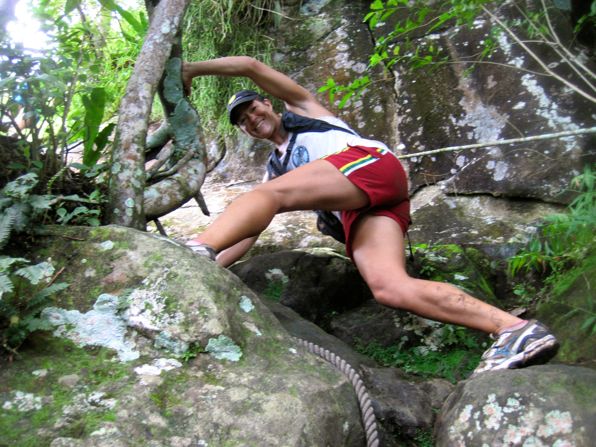 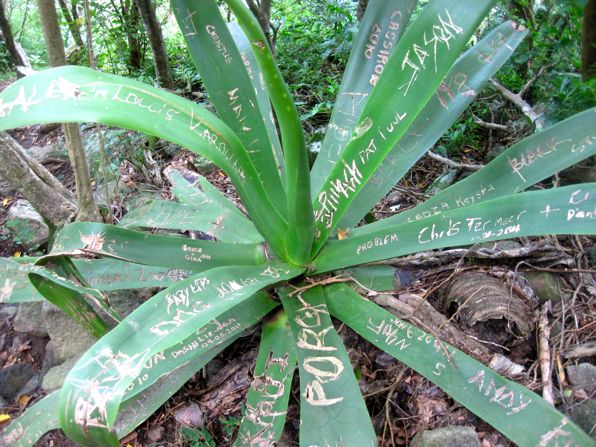 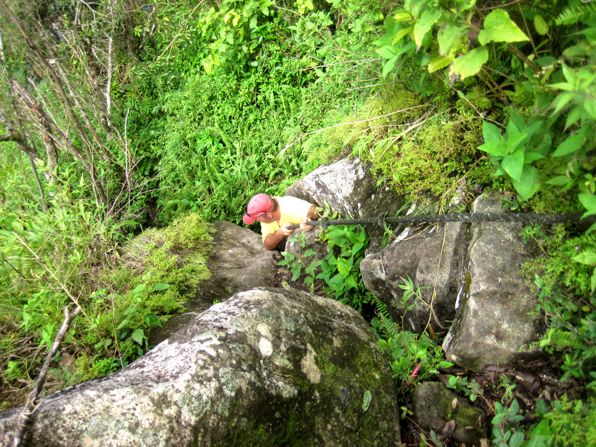 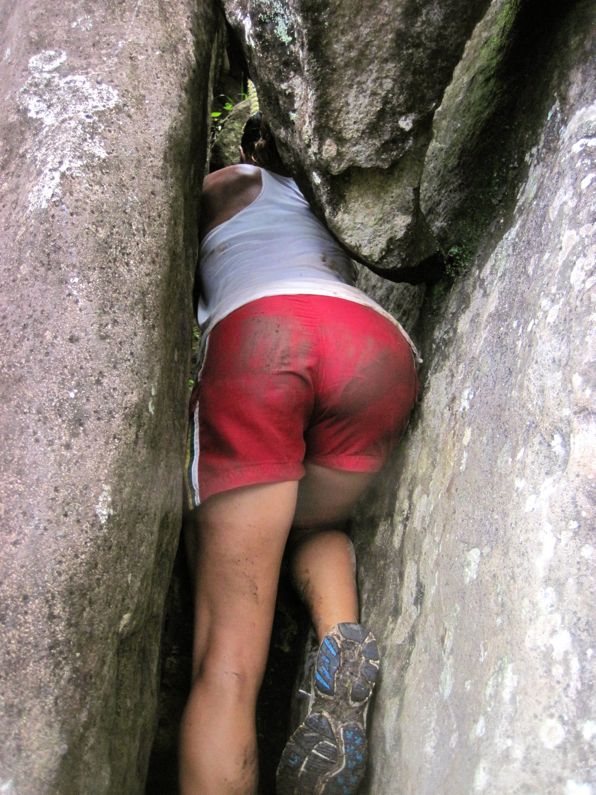 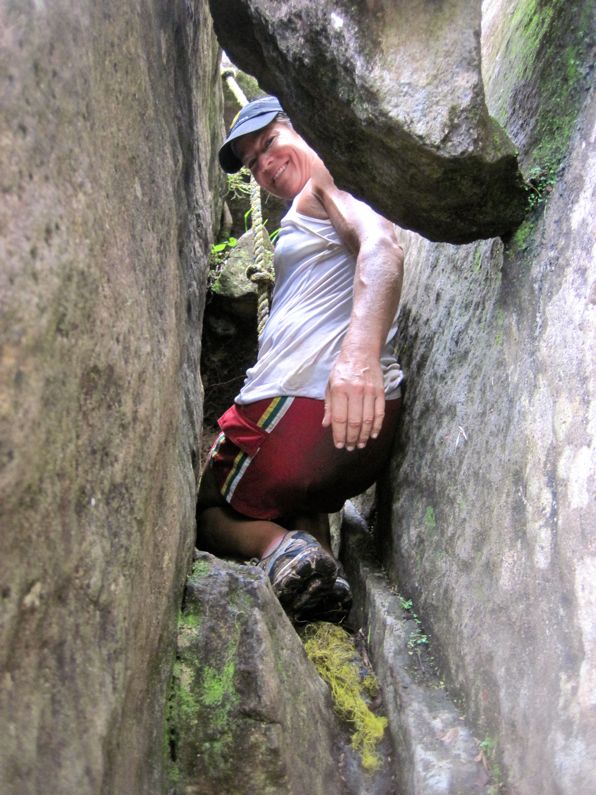 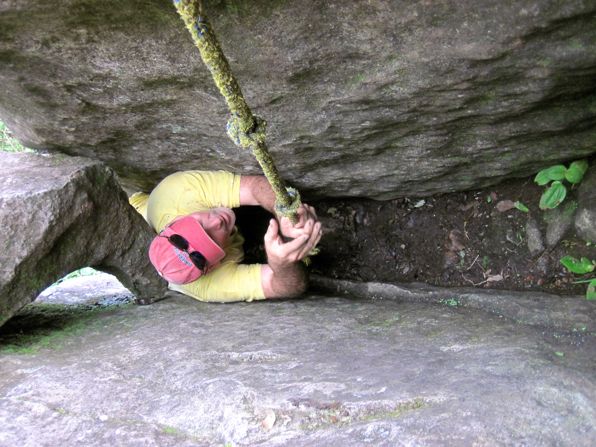 The summit, as you can maybe gather from the photos, provided an incredible view. The boats below us looked like tiny specs in the almost flat water. After resting for a while, and recharging with some water and food, we of course had to make the trip back down. Our worries that the descent would be tougher than the trip up were unfounded. Using the ropes on the tough spots and letting gravity help us down made it all OK.

I’m not sure exactly how long it took us to climb the big rock but the descent took us one hour and 45 minutes, about what we had heard it would take from others. One amusing point was just as we were nearing our dinghy, we passed a bunch of young tourists and a local guide. It was obvious to the guide that from the look of us, all sweaty, tired and dirty, and from our location, that we had just climbed Petit Piton. He told us that they had just climbed “the big one.” From the look of these people they could have just stepped out from a shopping mall, evidence to the vast difference between to two climbs. We’ll see for ourselves though, and post about it here, when we come back to tackle Gros Piton. 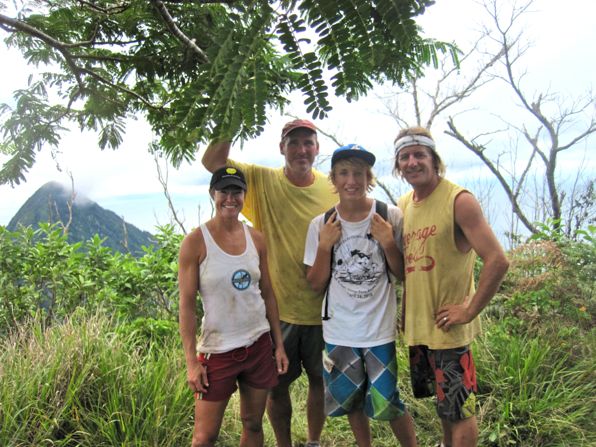 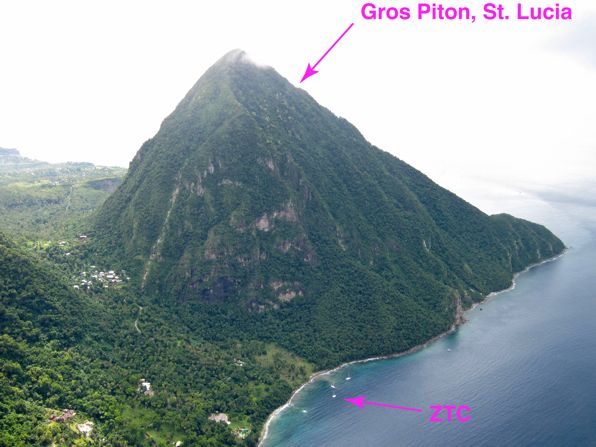 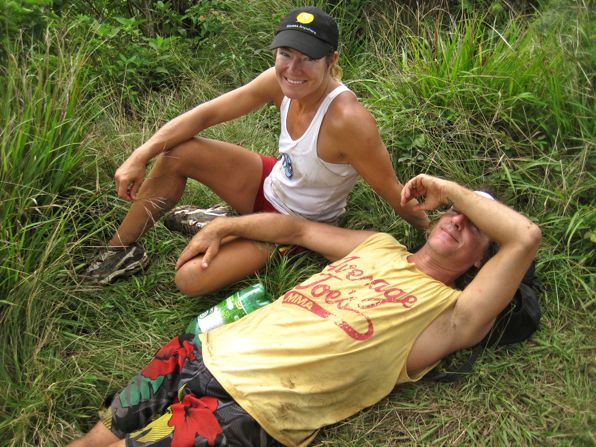 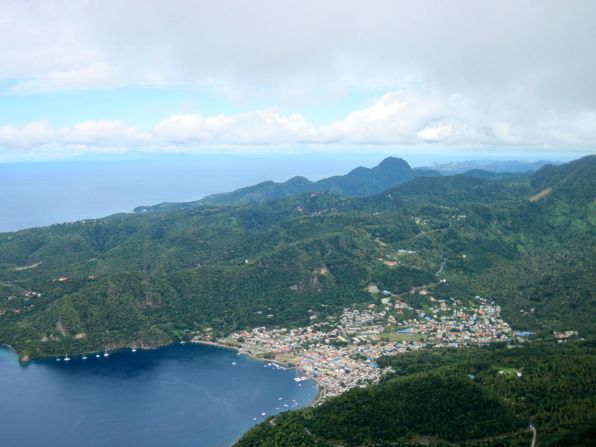 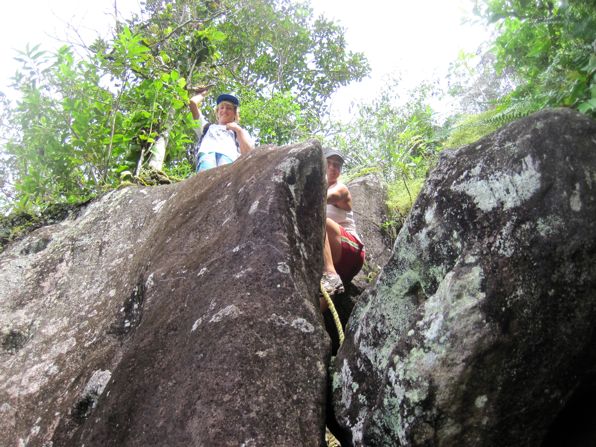 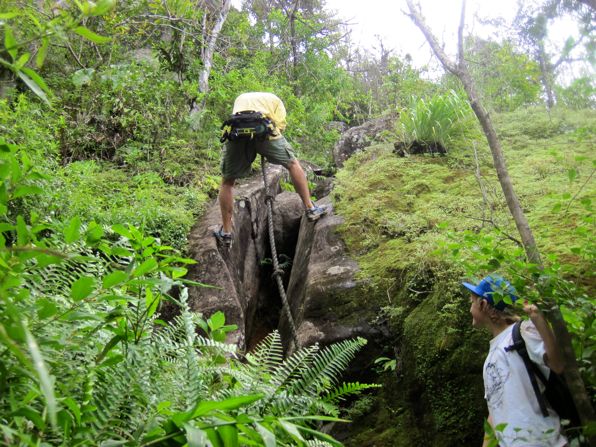 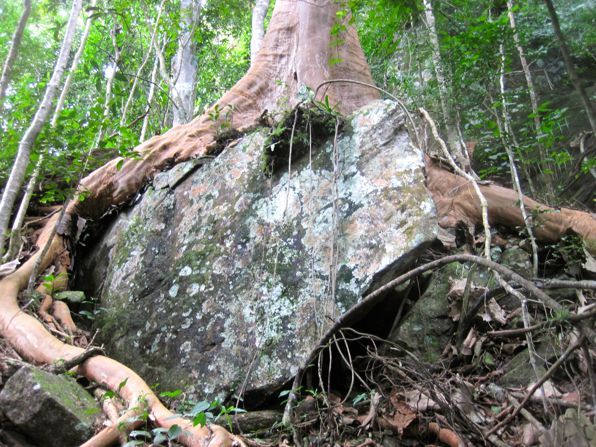 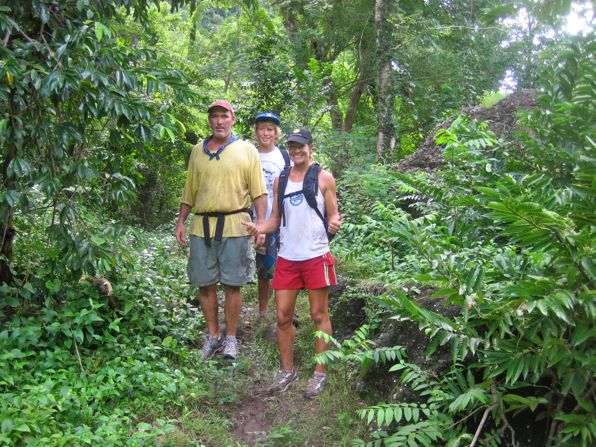 When having a mouse on a boat is a good thing.

Secure or easy to grab?