I suspect it is fairly common thinking that a larger boat is better than a smaller one. This is probably justified in many cases as it seems as if manufactures often begin by building smaller yachts and then as time goes on, increase their designs in size. That was not exactly the case with PDQ Yachts though. The original PDQ cat, a 34′ model, was introduced in 1987. This was eventually lengthened to 36′ and was very popular. In 1994, PDQ introduced a second design, a 32′ long model. While shorter in length, the newer yacht had both a higher bridge deck clearance (the distance from the surface of the water to the underside of the boat), and higher freeboard (the distance from the water’s surface to deck level). In fact, if you look at the image below which shows ZTC on the left rafted up to a PDQ 36 on the right, it almost appears as if our PDQ 32 is the larger boat! 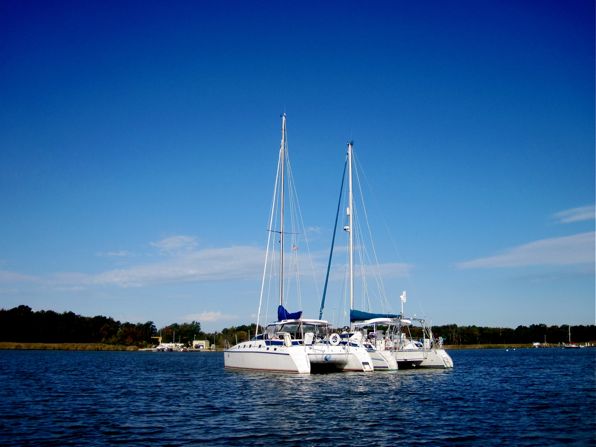 Rebecca and I had a real treat the last few days. We had the opportunity to spend some time with David Slater, the son of Alan Slater, PDQ’s chief engineer and designer. David shared his thoughts on the catamaran’s designs. He explained that when PDQ Yachts first introduced the 34/36, they had no idea that the catamaran owners would load so much “stuff” onto their boats. When they designed the newer model, keeping in mind what they had learned from their initial offering, they began with the bridge deck clearance that they wanted and then went from there. In his words, completely unsolicited, the 32 is really a better boat for cruising the tropics! Obviously, we are biased but, having been on board both models, we tend to agree. And we’re not the only ones. ZTC’s previous owner told us that when they were shopping for a cat, they looked at both the 32 and the 36 and chose the slightly shorter boat as they felt that is was a better design. Food for thought if you’re looking to purchase an awesome small catamaran! 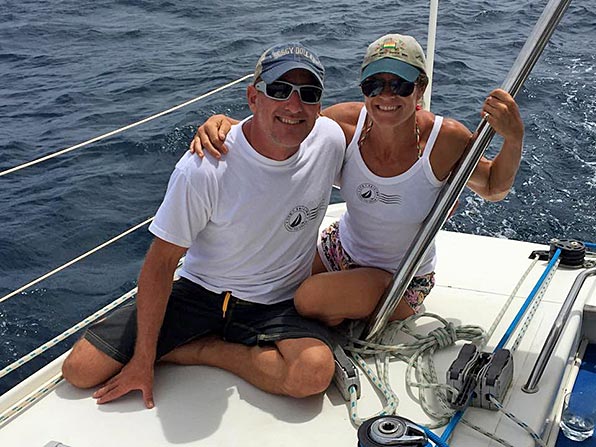 Sailing yesterday with David Slater and friends from LTD Sailing.

Don’t try this at home (or on your boat)!

Another day in “school”