A few years before Rebecca and I were married I had my very first experience sailing. It was a fairly memorable day as we ended up having one of the most serious situations possible onboard a boat, a MOB (Man Over Board), and it was the Captain that fell off the boat!

Departing from the local Yacht Club, I had gone out for a day sail on Lake Ontario with some friends, a husband and wife and their two kids. It was a nice, sunny day and although there was a good breeze for sailing, the waters weren’t rough to my recollection. After enjoying lunch, anchored in a nearby bay, we started to make our way back. The Captain opted to fly the spinnaker and he had me taking a turn on the tiller. For whatever reason, the Captain lost his balance and over he went, without a life jacket on! It was only at the moment that he fell overboard that I came to the realization that you can’t just turn a sailboat around as easily as you can a powerboat. Fortunately his wife was experienced and the kids knew the drill. They threw flotation stuff overboard and kept an eye on him while the wife ripped down the spinnaker and got us headed back towards him. Everything ended OK and the Captain was soon recovered in perfect health.

Years later, now that we are boat owners, we hope to never be put in a similar situation! 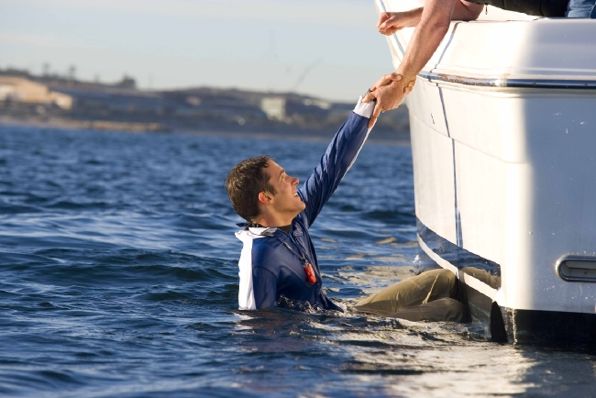 The calm before the storm? Just the calm please!

We’re conservative, at least when it comes to how much sail we have up.