Improvements overlooked by most guests – Part 3

Even though it’s been almost a month since I wrote the second installment in my Improvements overlooked by most guests series, I haven’t forgotten about it. Today’s add-on, a fresh water wash down hose located in the cockpit, is actually somewhat related to the previous one, our hi-capacity watermaker.

Like many of my upgrades, I received this idea from our friends Peter and Bobbi on another 4600 named Grand Cru. Peter had installed a similar hose in his cockpit area, albeit in a different location (he added his in the lift raft locker, tying into the transom shower plumbing). While our hose remains tucked away under the helm almost all of the time, I frequently pull it out during charters to flush out the crumbs, sand and hair that tends to accumulate under the cockpit table, and around the transoms. 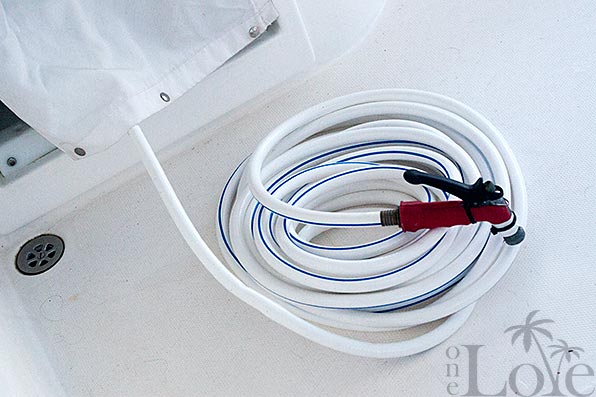 While similar results could have been accomplished by plumbing in a separate salt-water wash down pump, with the large amount of fresh water that we can produce, simply tying into the boat’s normal fresh water system was a much more streamlined solution. While our guests seldom ever see me using this, they do get to enjoy a nice clean cockpit!

Everything happens for a reason?