Everything happens for a reason, including Loreto

There are those who find comfort in the thought that everything happens for a reason. Working on that premise, perhaps we acquired our tire problem so that we could:

After calling upon our friend Salvador to save us by sending us new tires, we only had a day to wait for them to arrive. There’s a fairly efficient delivery service here called BajaPack which works via the buses. It’s how we received the inReach satellite tracker from Ryan, and it worked just as well for the box of goodies that we received from Fass Bikes. 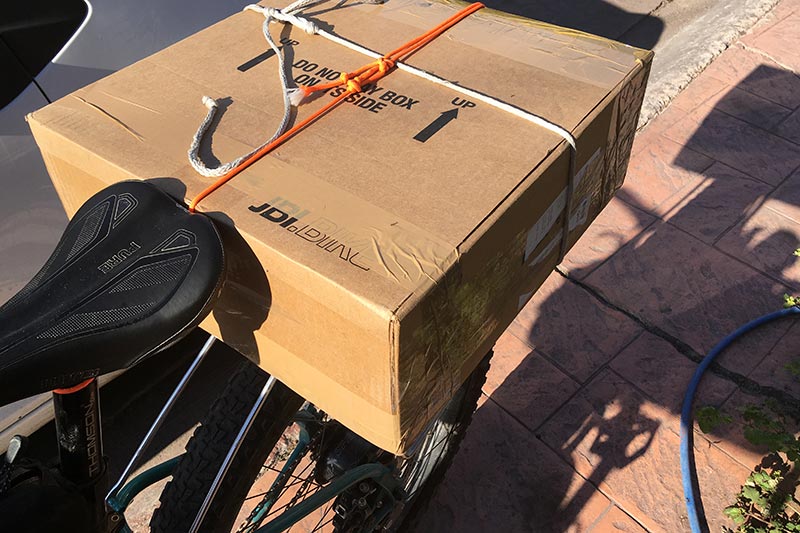 The rear rack is handy for packages! 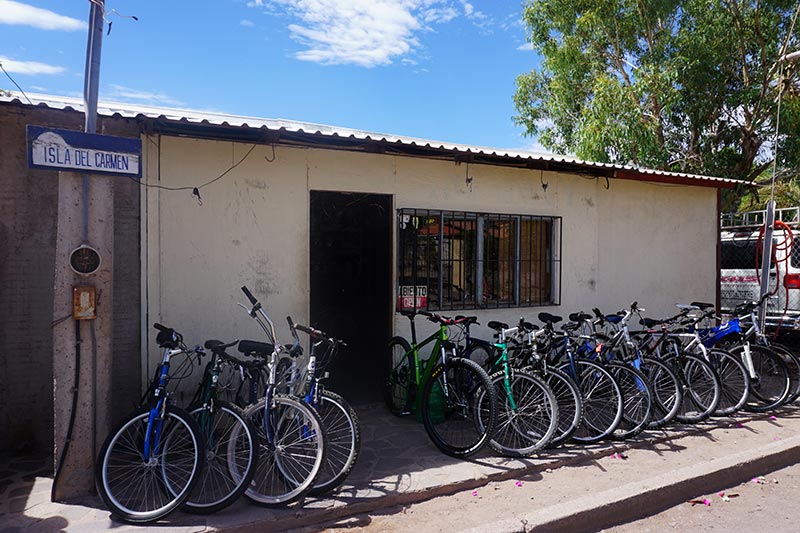 Manny’s bike shop. He does not have a website but if you search for it on Google, you’ll find the address.

As my rear tire was essentially dead, I borrowed Rebecca’s bike yesterday morning and rode to the bus station to pick up the package. We then rode (limped actually – I had to re-inflate my tire twice during the 10 minute trip) to Manny’s bike shop, which fortunately was located close to our hotel. Instead of just having him install the new tires – we had decided to replace all four tires instead of just the one damaged one – we asked if we could watch the process so that we could learn how to do it. Manny was more than accommodating, and took care to point out all of the pertinent details. 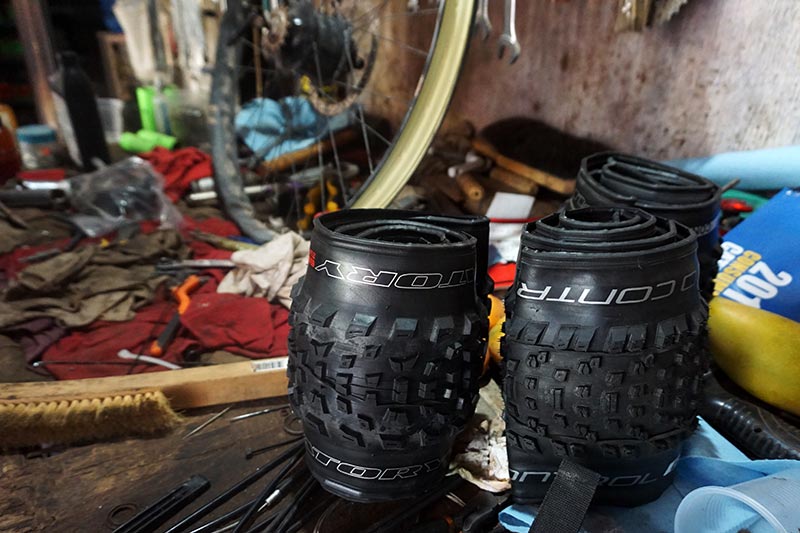 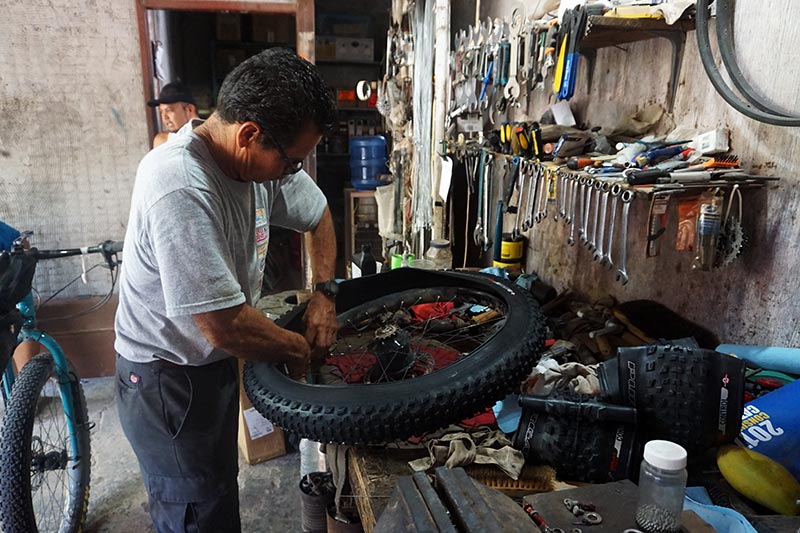 Fitting the first of them onto Rebecca’s wheel.

In spite of what we may have expected, getting the new tires set up tubeless was quick and painless. This surprised me because the tires were folded, and I expected it to take some effort. The key to making the job easy is having an air compressor on hand though, something that we wouldn’t have in the field. In spite of that, I still have a better handle on the process, and what we should do if we run into similar problems in the future.

Manny told us that he has had his shop in the same location for 23 years. Coincidentally, that is the same number of years that I ran our martial arts school, although we were not in the same building for all that time. 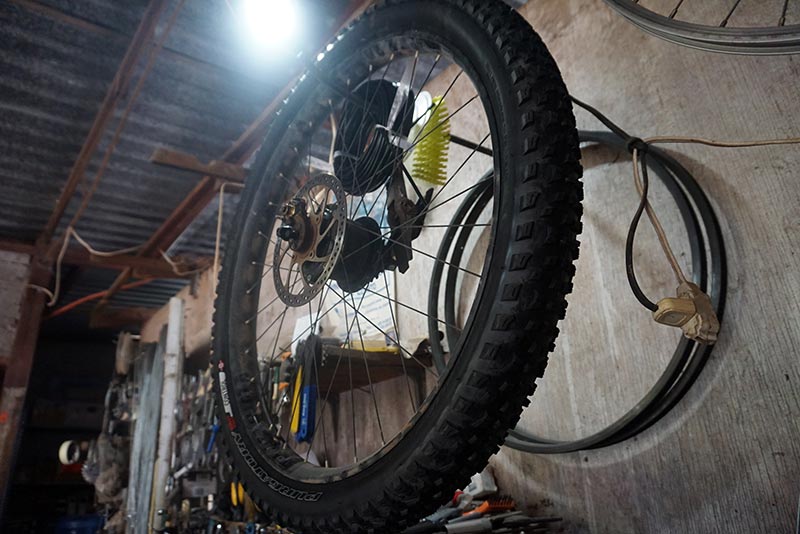 Because we had enough to do so, we put a double dose (8 oz) of Stan’s NoTubes sealant into each tire. The increased weight in each wheel means nothing to us but the ability to deal with punctures means a lot! I expect that we’ll be good to go for some time now. 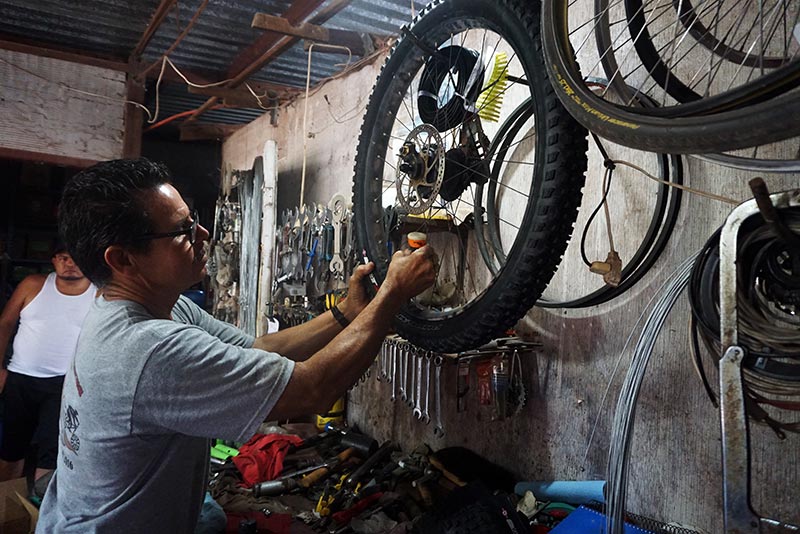 Adding sealant. We put a full 8 oz. into each tire. 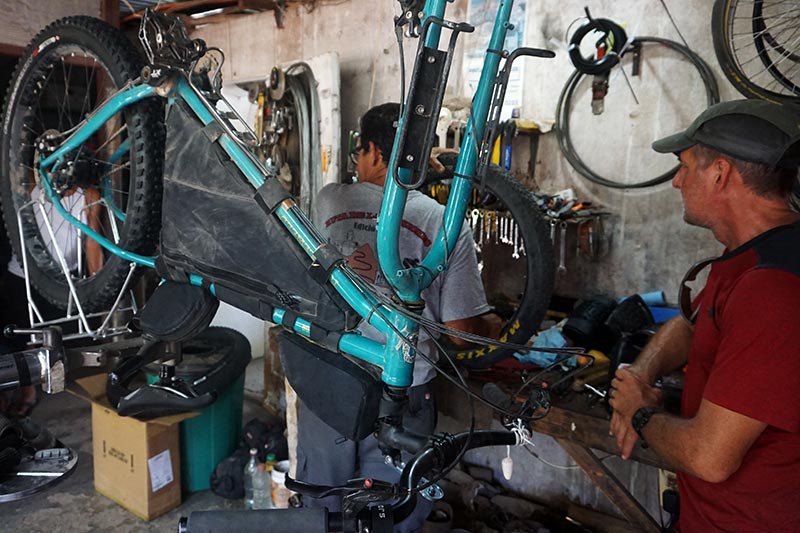 In addition to setting up the four new tires, Manny also helped to wrestle my seat back into shape. One of the rails had become dislodged from the saddle during the truck ride from San Nicolas to El Rosarito, and unable to fix it on the side of the road, I had simply bandaged it up with some Gorilla Tape for the ride to Loreto. Although it held, that wasn’t going to work long term, so with a lot of effort, and some good use of leverage, we were able to put things back in order. 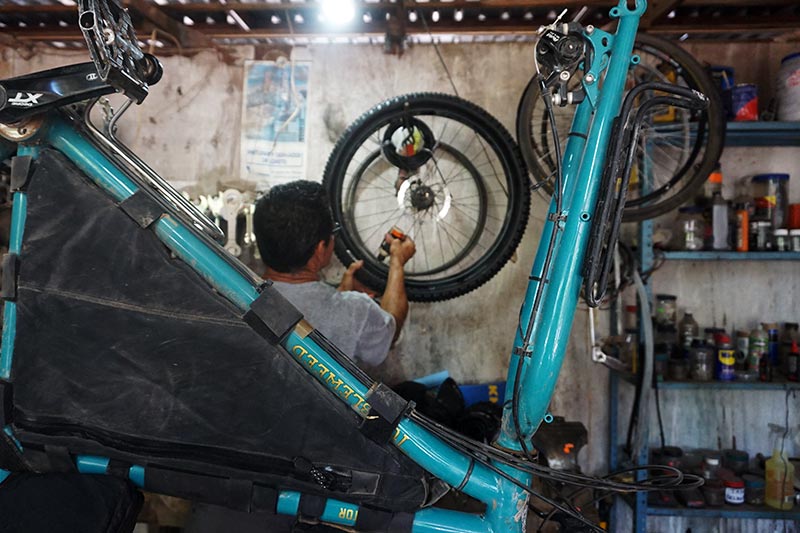 A bike stand makes things a bit easier, as does an air compressor! 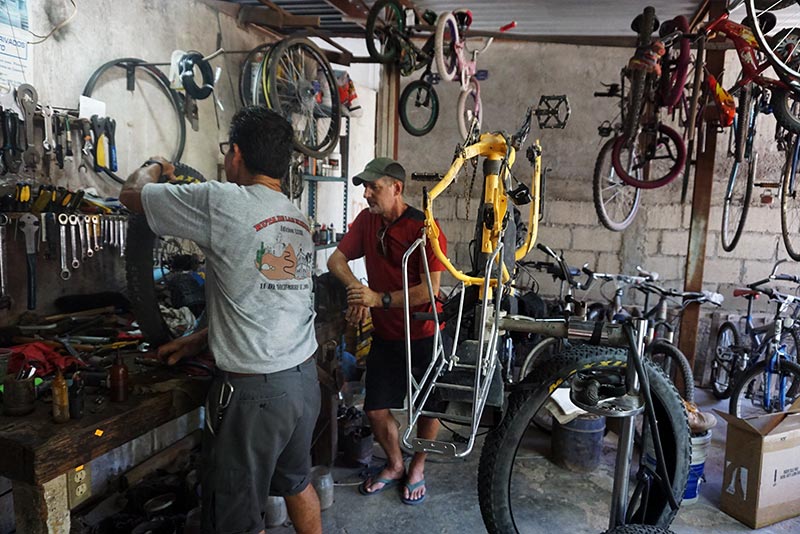 Now working on my bike.

Once all the hard work was completed, Rebecca and I took the rest of the day to relax. We rode our unloaded bikes around the waterfront, giving the sealant a chance to splash around inside the tires while we took in the scenery. Following that, we returned the bikes to our hotel room, and took on the challenge of taste testing all the different varieties of margaritas on offer here. For the record, there are a lot! 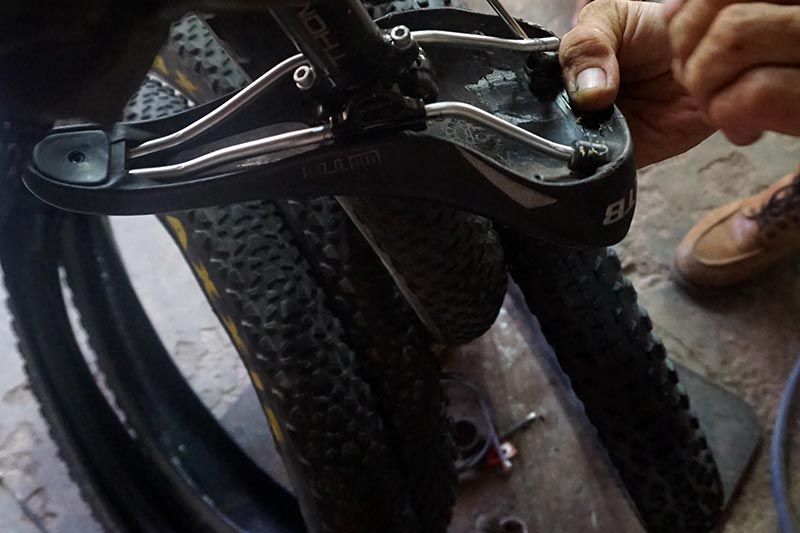 Note how the one rail has popped out of place. 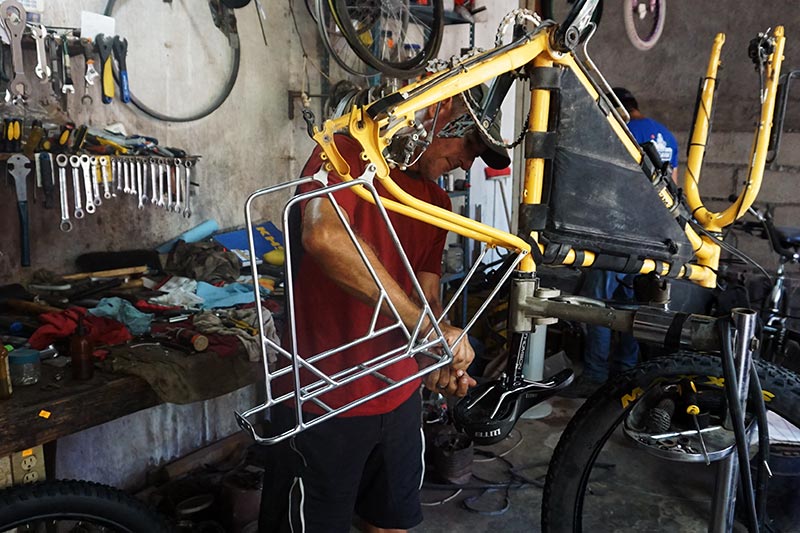 Putting the saddle back together.

Today will be a get-ready-to-travel day. We’ll clean up the bikes, buy some groceries (Rebecca has already left to go to the store), and refill our water bottles. Our intention is to make the 20-mile climb to rejoin the Baja Divide route tomorrow. Manny told us that he and some friends routinely ride the road to San Javier, the track that we’ll be taking. We already knew that it was uphill most of the way, and he confirmed that yes, it can be difficult. He also let us know that the record amongst his friends to complete that ride is only 1 hour and 7 minutes. Google has somehow computed that it’ll take 2:59 minutes. My guess is that, on a fully loaded bike, it may take even more than that. I guess we’ll see! 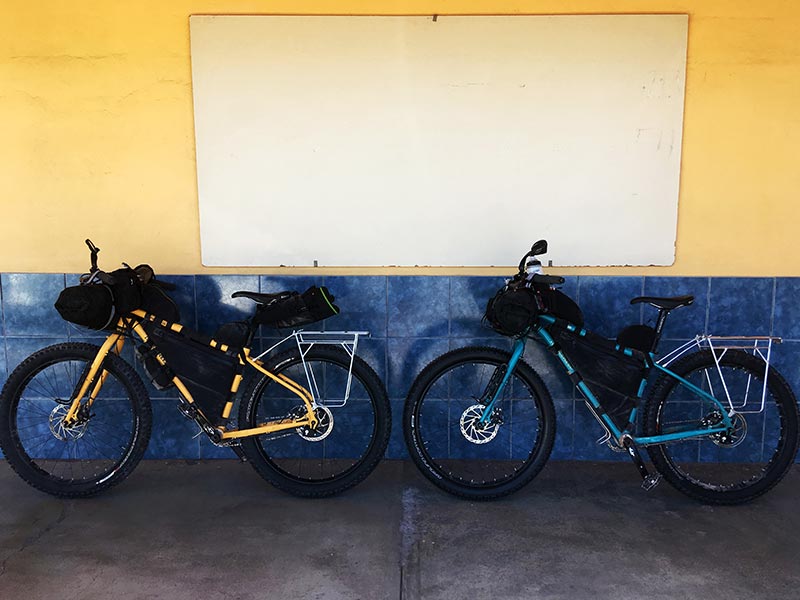 Out for a ride with brand new tires and hardly any luggage. 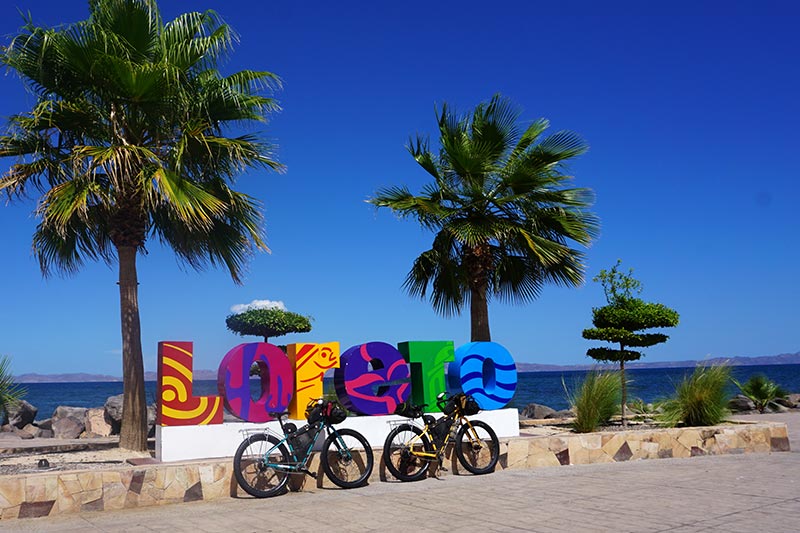 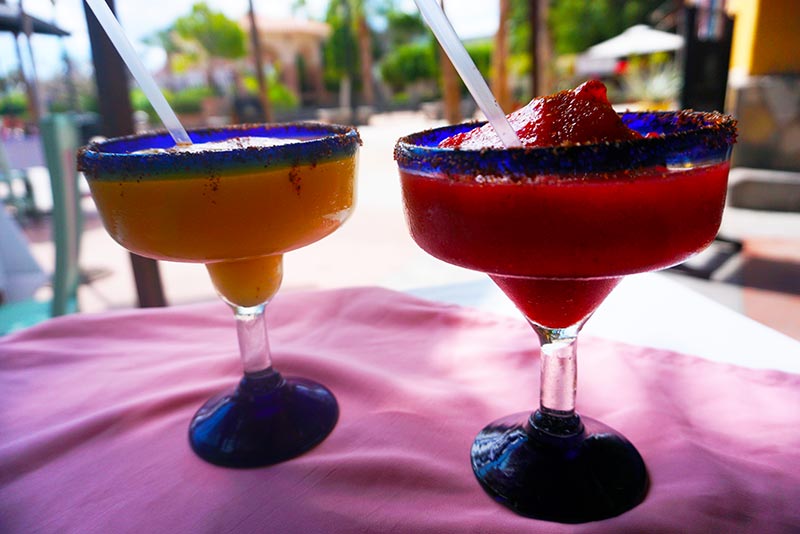 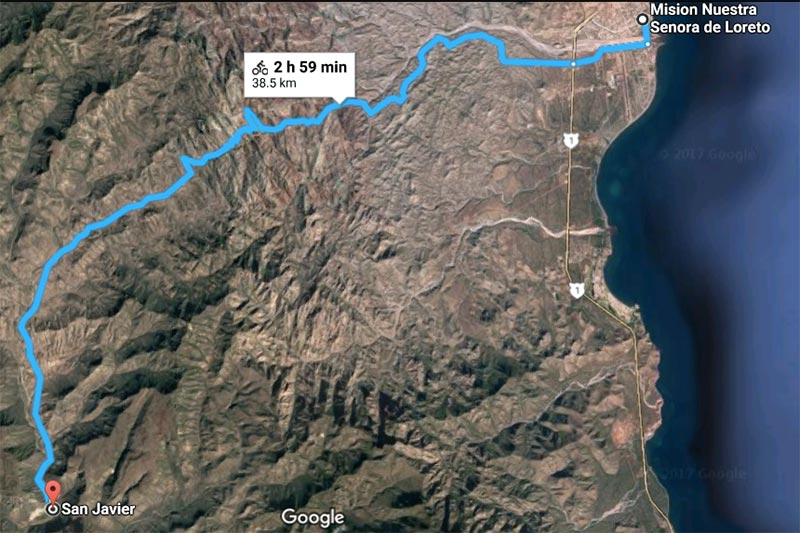 I wonder how Google came up with that time estimate. 🙂

We’ll grow into the weight. I hope!

An entire day of travel, as good as it gets

If nothing else, we’re at least consistent