Several people have asked me about the drivetrain on our bikes, noting that they look like they are single speeds. While certain supermen do race and tour on single speeds, Rebecca and I both want and need a selection of gears for climbing the big hills. Enter the Rohloff Speedhub.

Like almost all things bike related, until we started researching, we knew next to nothing about bike components, and we had definitely never heard of sealed-gear hubs. After coming across multiple references to the Rohloff, each of them asserting how robust they are, we were next to sold. The only hindrance to purchasing them was the big price tag, and of course selecting frames that were compatible (most are I think, but not all). As it turns out, the Rohloff is so well thought of that the frames we purchased, the Tumbleweed, were actually designed around them!

Rohloff Speedhubs offer 14 gears, which apparently offers the same gear range as a 27 speed bike. The important bits are all sealed in the rear hub, and aside from changing the oil every 2500 miles – easier than changing the oil in a diesel engine, I suspect – there’s not much more that you need to do to take care of them. 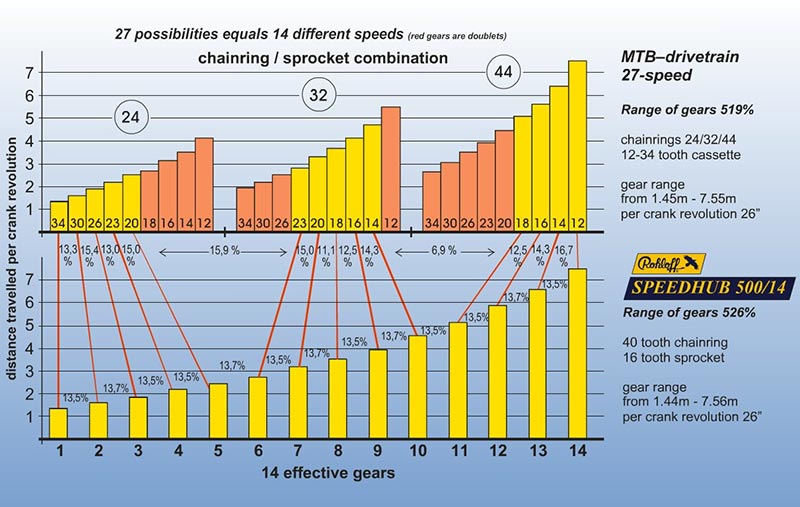 If the Rohloff does break, we’ll get to take a break!

It’s worth noting that there are a bunch of tiny bits inside the Rohloff, meaning that they’re not really user serviceable. In other words, if the hub breaks, it’s going to need to be sent back to the factory for repair. That’s apparently a very rare thing though, much more rare than running into trouble with the derailleurs on a traditionally-geared bike.

One other feature of the Rohloff that we’ve come to appreciate is that gears can be changed while the bike is stopped. This comes into play far more often than you’d think (imagine stopping at a street light at the bottom of a hill, and needing to shift in to a lower gear to get going again).

Will this purchase work out for us? As with everything we have done so far, we’ll see. Right now, we’re pretty happy with how the bikes are set up, and have faith that they’ll serve us well.

When boating and cycling worlds collide

Swallowing the anchor – There is life after cruising