Off the road or on the road: which feels better?

I’m not sure what feels better: arriving to a town after several days of traveling where we can find ourselves a cheap hotel room with a shower and a comfortable bed, or getting back on the road after a couple of days off. At this point, I’d have to say that they both feel equally good. Loreto was a great place to visit, perhaps especially so because it wasn’t on our planned itinerary, but it was just as nice to head out again, working to get back on the route that we had deviated from. 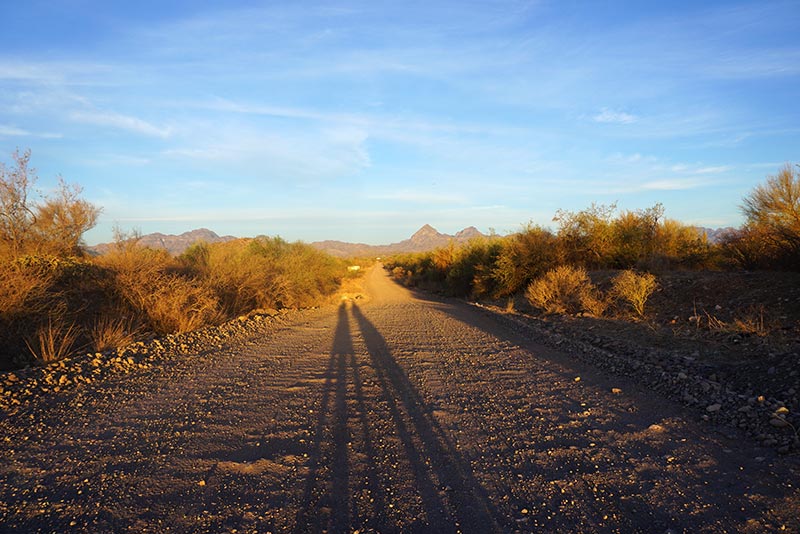 Keep your eye on that pointy mountain in the center of the pic. We would ultimately pass it. 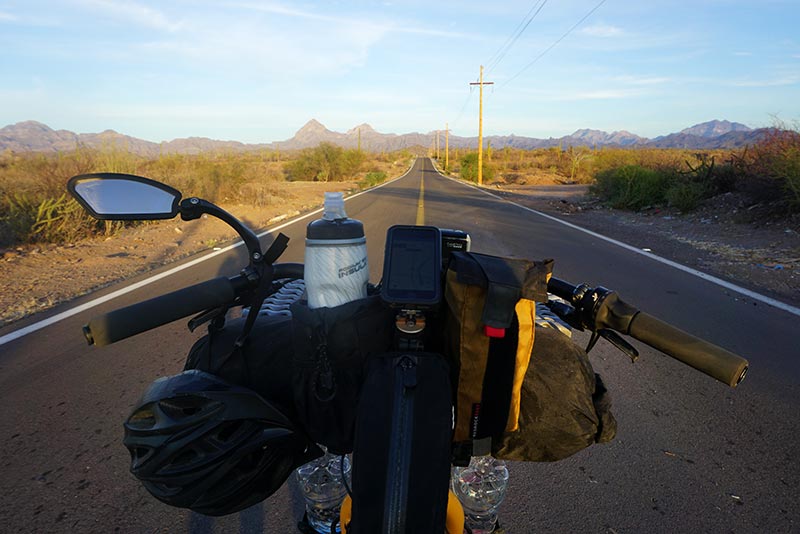 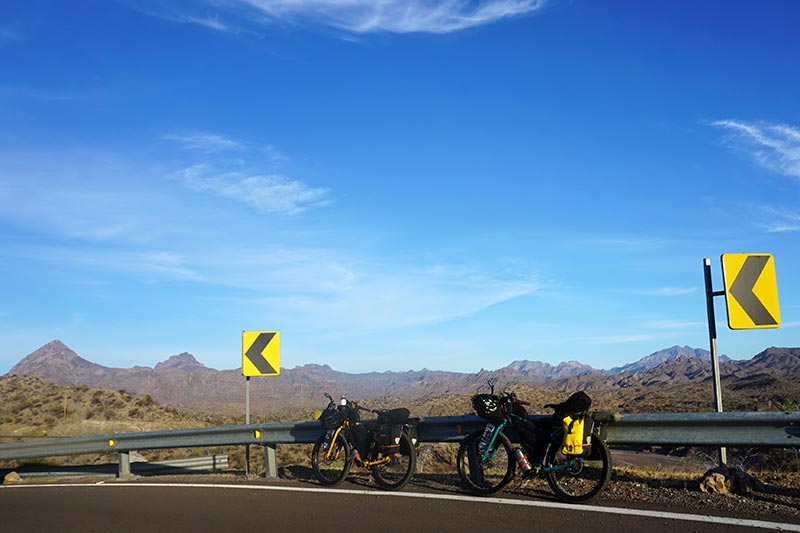 Two minute rest break at the top of one of the hills. Pointy mountain closer still.

If there is a perfect (paved) road, it’s one that has new asphalt, little traffic, and some pleasant scenery to look at as you ride. That pretty much describes the road that we left Loreto on to regain the Baja Divide route. Of course, beginning at sea level, there had to be a big climb involved, but even though we needed to push our fully-loaded bikes up some of the steepest sections, we were still smiling when we reached the high point. I can see why the local cyclists use that road to San Javier as one of their training rides as it would leave them with a wicked descent back home! 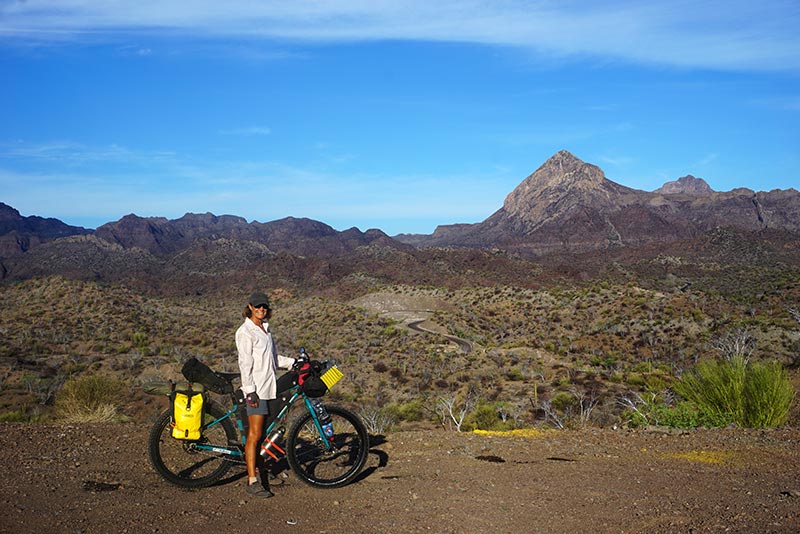 The pointy mountain is getting closer, and road winds away in the distance, soon to be followed. 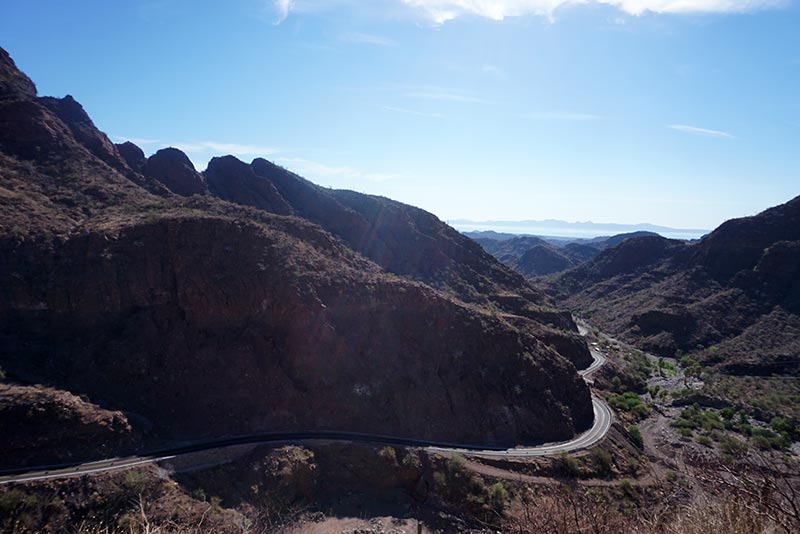 Pointy mountain is off to the left somewhere, now behind us. 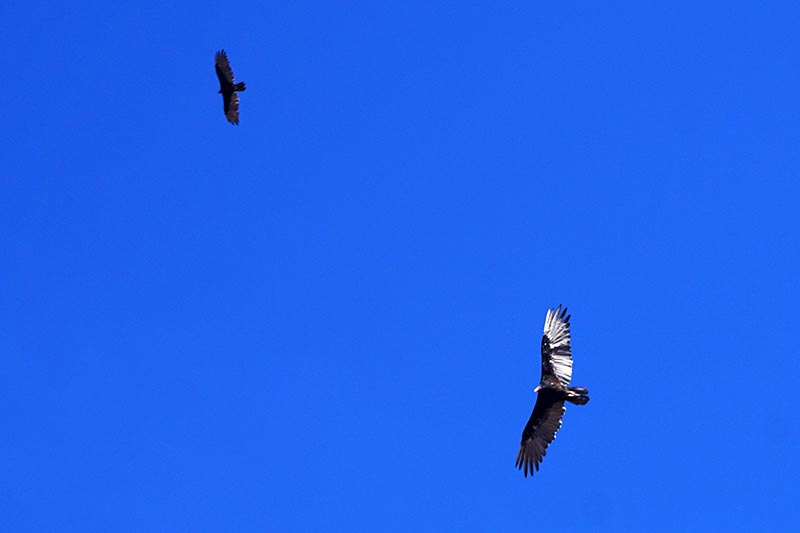 It was cool to see these guys flying up from below us!

We arrived at San Javier a little before 11:00 AM. We had read that, being so close to Loreto, San Javier is one of the most frequently-visited mission sites. To be honest though, all we were really interested in visiting at that point was a place with food, coffee, and cold beverages! We found such a place, right in front of the mission. As it was out of the sun, we settled in to recharge our batteries. Our plan was to hide in the shade for the hottest part of the day, and then, after topping off our water supply, head out of town for what we expected would be a 4-day/3-night trip to Ciudad Constitucio?n. 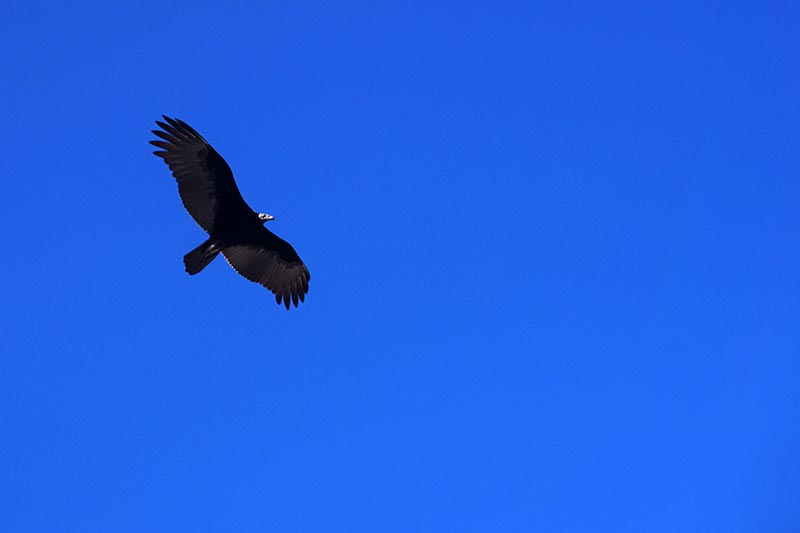 Ahhh, to have wings… 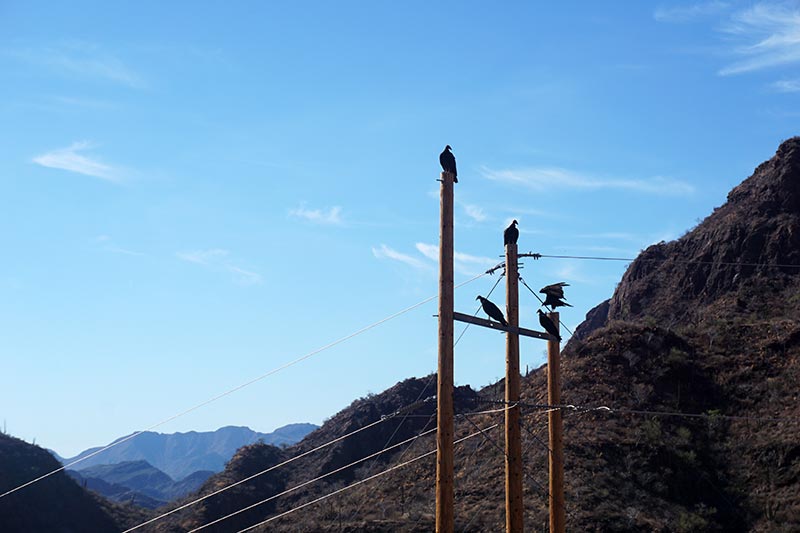 Not today, my friends, not today! 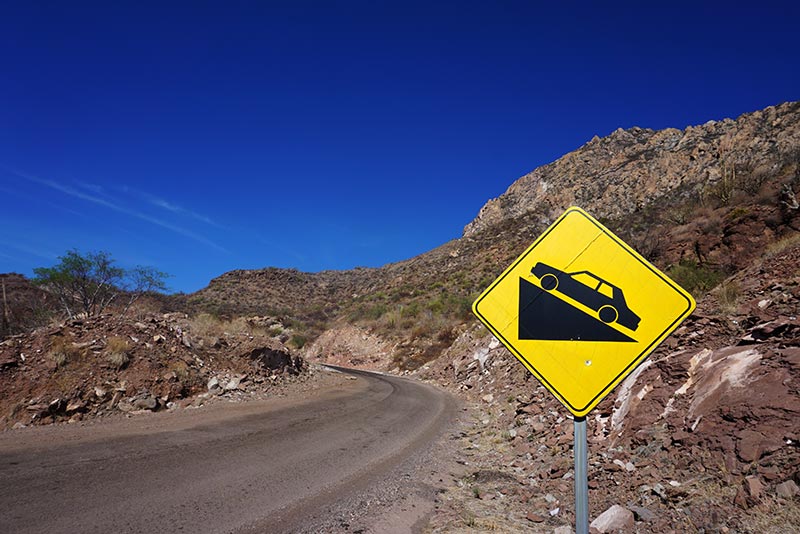 There should be an image of a cyclist pushing his bike on this sign.

The first hiccup to our plan came when we asked about buying water. In most towns in Baja, there are stations where you can refill your bottles with agua purificada, purified water. In the absence of one of those, we have purchased gallon jugs to top up our bottles. In that little store, all they had were single use bottles, and aside from just two 1-liter ones, the rest only held 600ml. That meant that in order to refill all of our containers, we would need to purchase 25 plastic bottles! Doing so was not going to make me happy. 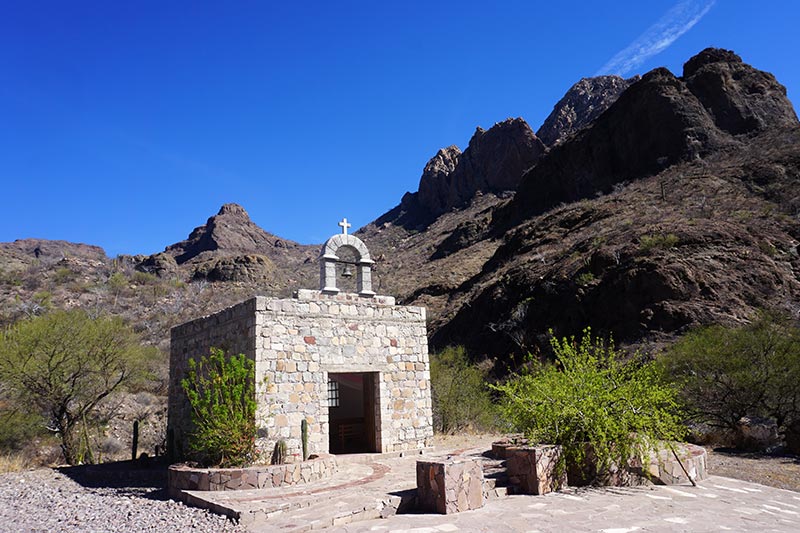 A beautiful little chapel on the side of the road. 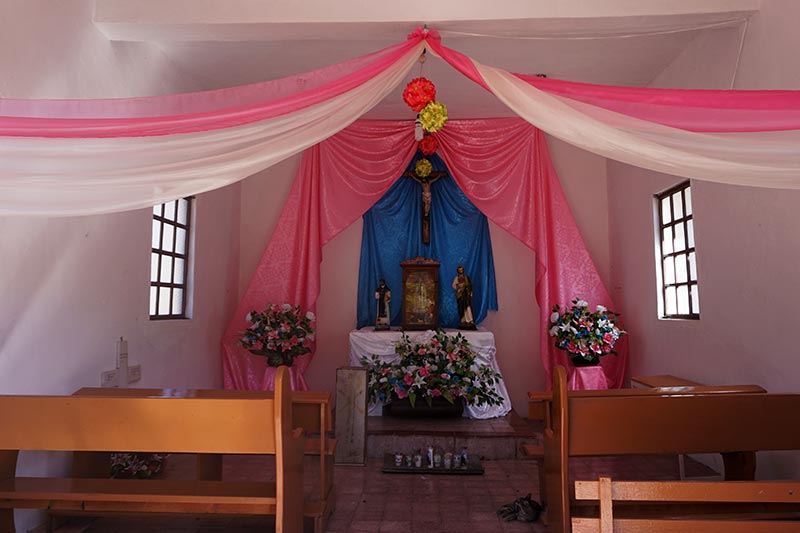 Note cat on floor. Smart cat hiding from the sun! 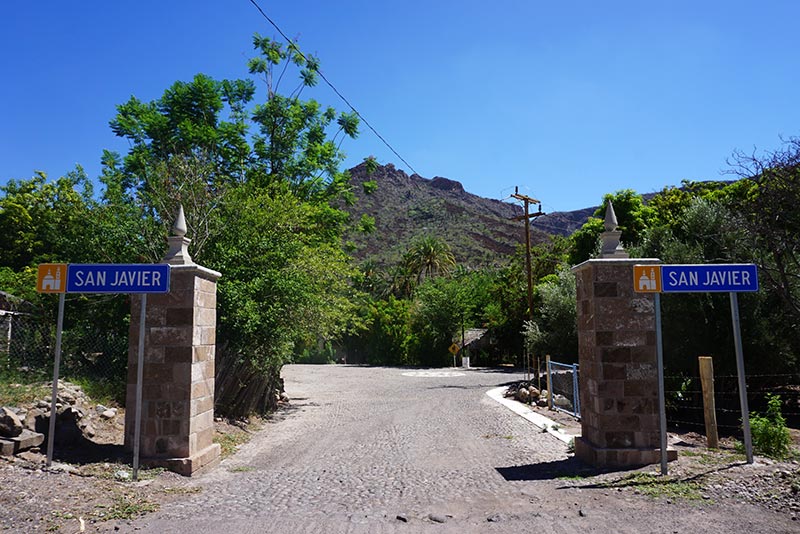 We asked the lady at the café if there was anywhere else to acquire water and although I couldn’t understand exactly what she was saying, I got the feeling she was telling us no. We decided to check for ourselves though, so after paying our tab, we walked the bikes across the street to the one other restaurant in town. That place not only had cold drinks – we were still rehydrating – the lady serving us said that she could definitely refill our bottles. Problem averted, and we had a new place to hide from the sun. 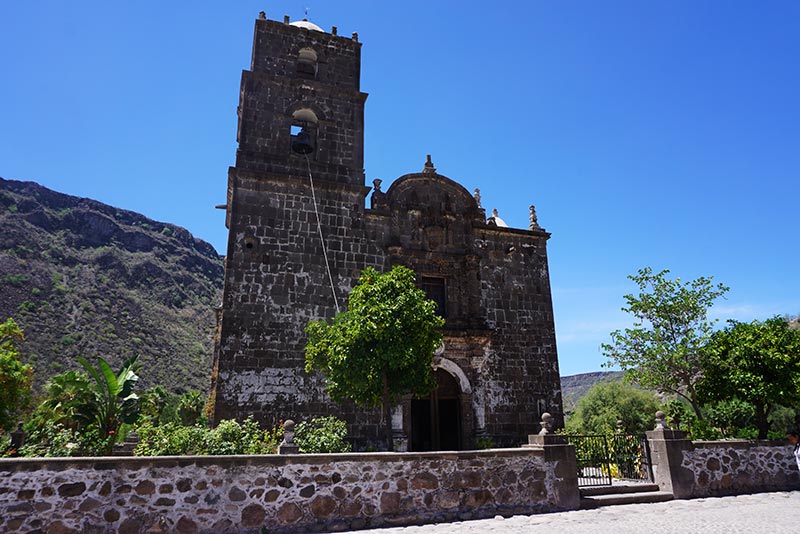 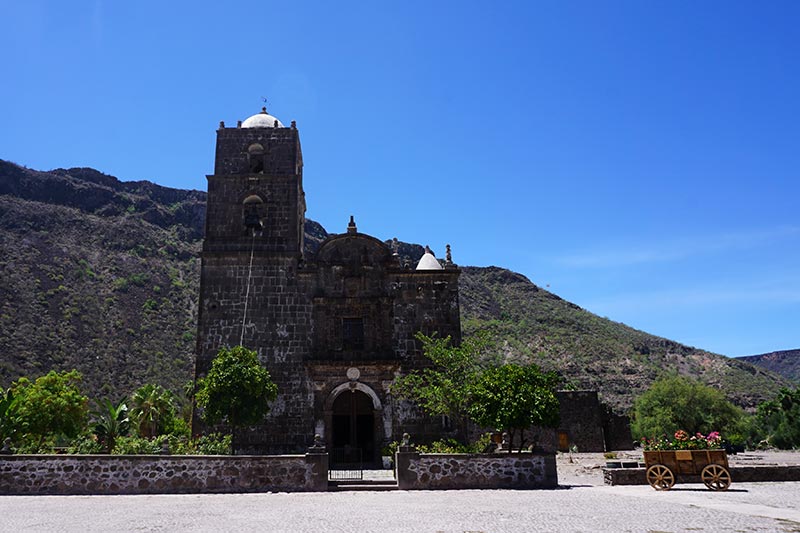 I had to wait to get this shot as people kept parking in front of the building! 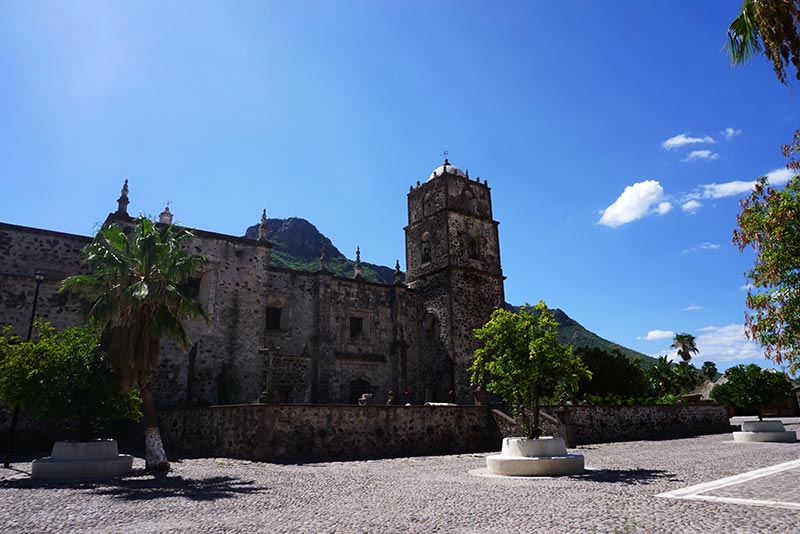 The ride out of San Javier was just as pleasant as the ride into it. A tiny downhill slope on a well-traveled dirt road made for fairly fast riding to our first camping spot. The roads deteriorated the next day, reportedly the result of storm damage. Our only comment on that was that it must have been quite the storm(s) to scatter rocks so large onto the “roads!” 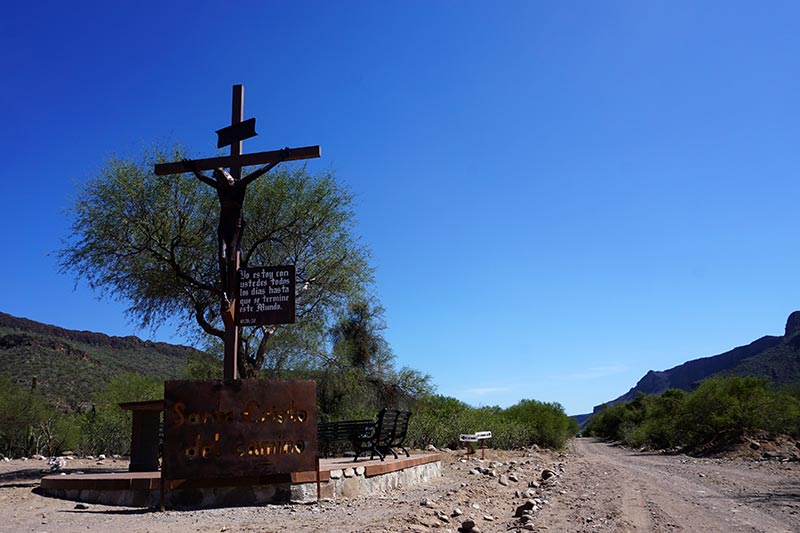 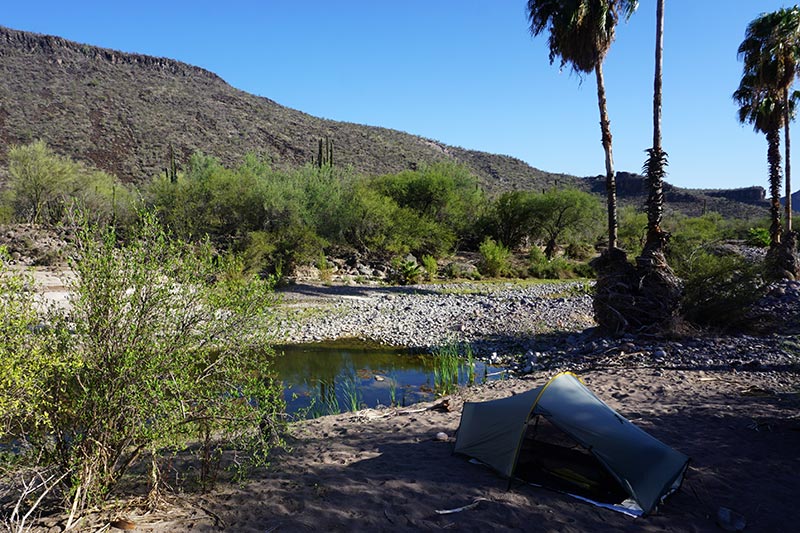 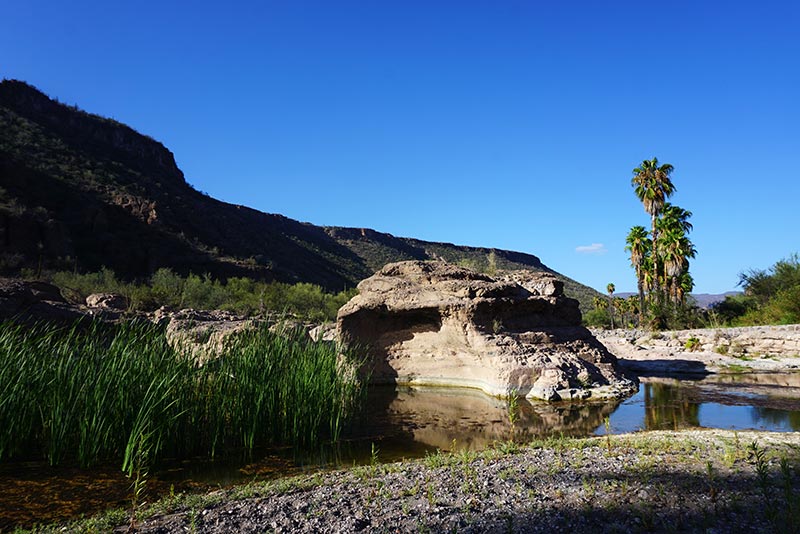 Yesterday, we got underway early – as early as daylight would allow – and rode the 28 km to Ley Federal Agua #1 (anyone know the significance of that name?). We arrived to find a proper Agua Purification station and a small tienda (store) selling cold drinks, all we could want. After restocking our fluids, we decided that hanging out in that small village for hours, waiting for the sun to stop its daily inferno, was not so appealing, especially considering our destination, Ciudad Constitucio?n, was only 40 km away. That was a doable distance if we were to get back in the saddle, so after rehydrating, and checking into our social media accounts (yes, there was cell service), we got back at it. 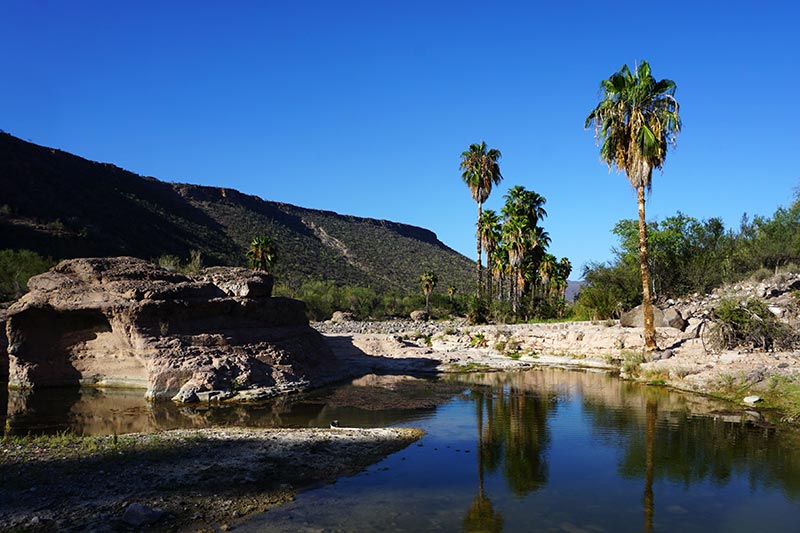 Not nice enough to swim in, but we did use the water to clean the dirt off our arms and legs. 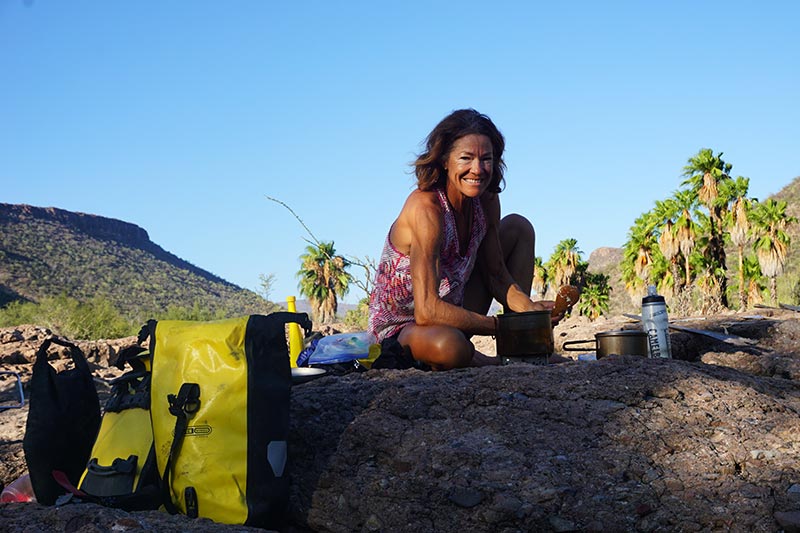 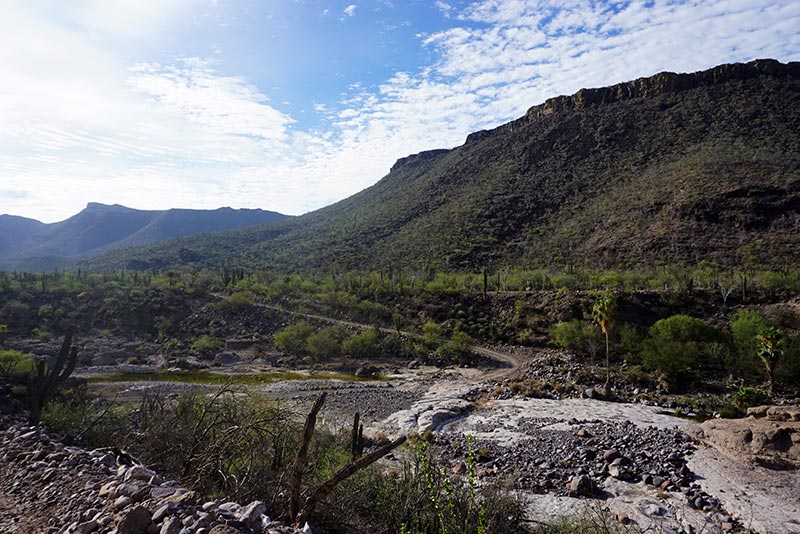 Underway early again, this time with the sun in our eyes.

The first 10-15 km or so was paved, again, making for quick riding. The remainder was flat but slower, due to numerous sandy sections, and later, the ubiquitous Baja washboarded gravel road. In the final 16 km stretch, the washboard was coupled with a strong headwind and less than beautiful scenery – we were riding by an area which appeared to be a dump. This is concerning because the route guide says that we’ll pass the “steaming burning dump” on the way out of Ciudad Constitucio?n. I guess we’ll have something to compare it to!

One of the books we read prior to setting off on this tour described a headwind as a giant putting his hand on your forehead, holding you back. I now always imagine that when faced with a headwind, that or the difficulties we had when sailing (motoring actually) into a strong wind.

Ciudad Constitucio?n is a relatively large Baja town located on the Mex 1 highway. We grabbed a room in a small hotel for the night and earlier today, ventured out for breakfast. Like most places we have visited, we found the streets lined with friendly people, each ready to return the offer of a smile, or a greeting of Buenos Dias. There are garbage cans everywhere on the main streets, and numerous people could be seen sweeping the roads in front of their homes and businesses, removing dead leaves and dust. Is that what you visualize when you think of Mexico? 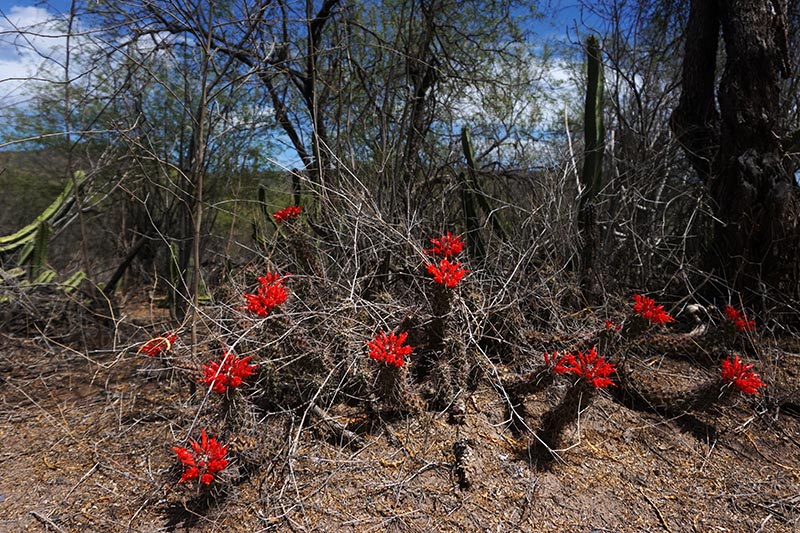 These red flowers were in bloom everywhere. 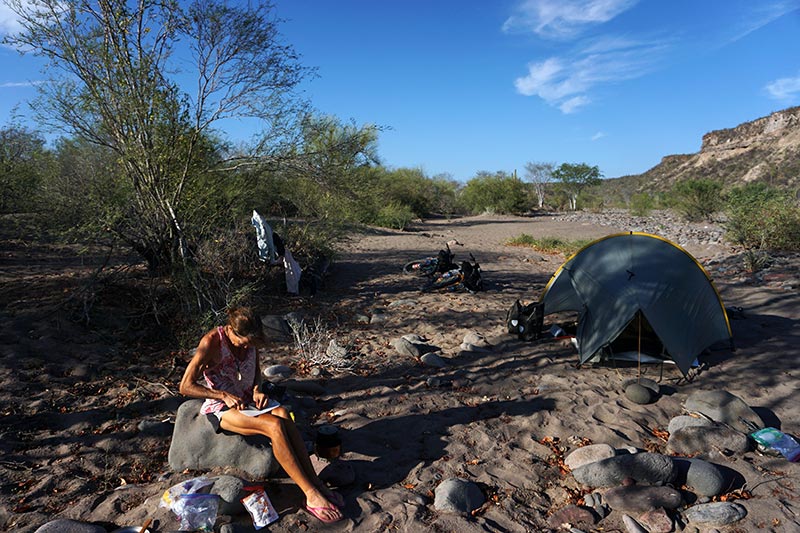 Camping spot for night two. Once again, Rebecca in the “galley.” 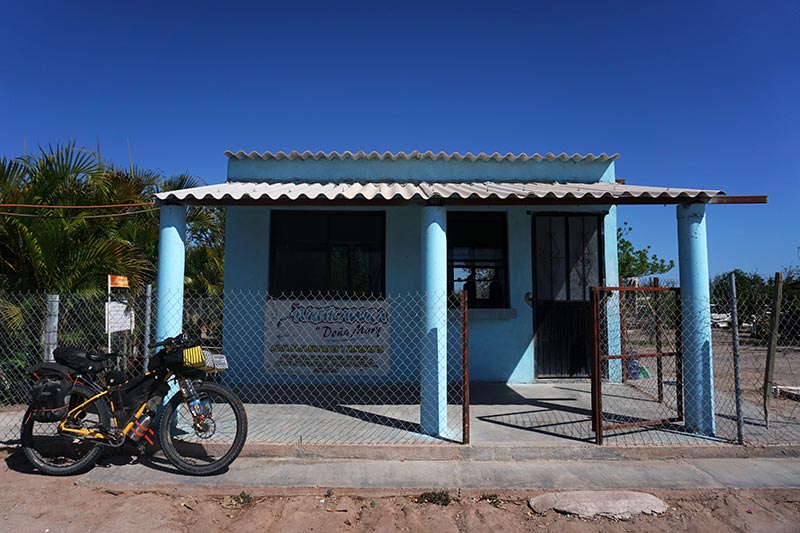 In spite of how nice the town may be, we’ll quite likely head out on the trail again tomorrow. We have a lengthy stretch ahead of us, leading us towards the coastal city of La Paz. The Baja Divide route departs again from there to make a loop around the lower end of the peninsula, and continuing on that path is one option available to us. We could also choose to ride just a part of that before venturing off to explore the coastal route which goes through Cabo San Lucas, or instead, to dispense with the lower region of Baja altogether and make our way to the mainland. Decisions, decisions. 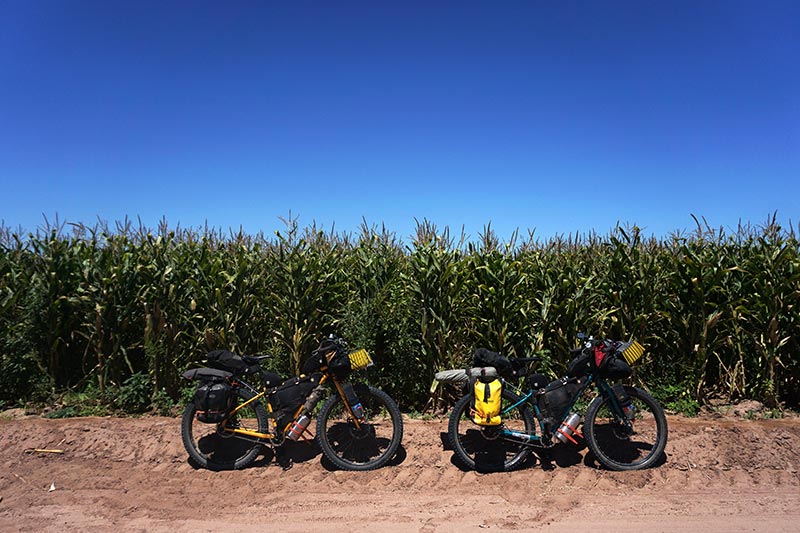 Yesterday’s riding was partially through an agricultural area. 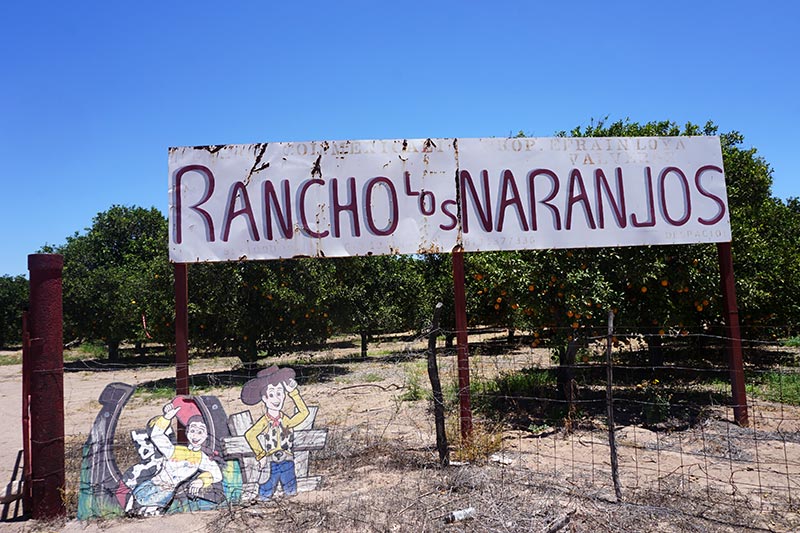 My kind of ranch! 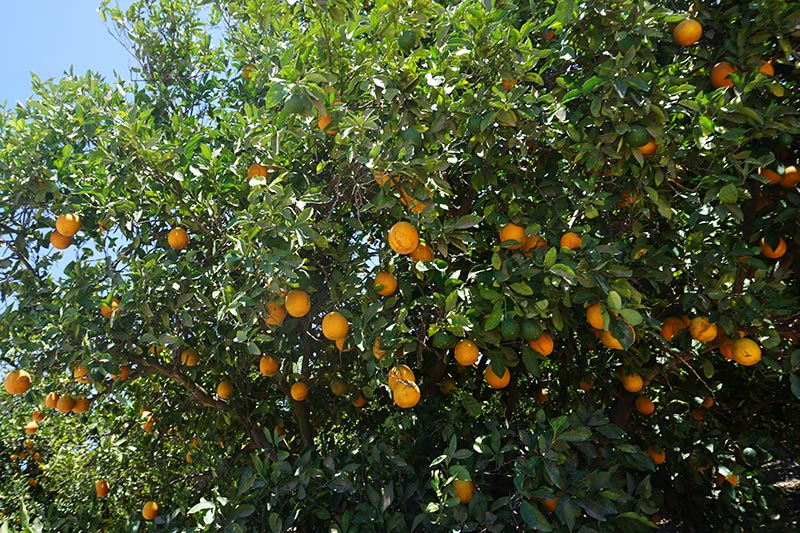 I can’t tell you how badly I wanted to pick some of these oranges. But I didn’t!

?Sometimes, as in this case, we pause our tracker during our afternoon break. We don’t always remember to do so, which is why you’ll see that the time underway is longer the following two days.

Looks like we’re leaving Baja at the right time!