Our first charter is progressing well and we couldn’t have asked for a better set of guests. As is sometimes the case though, the weather has not been ideal. Whatever system is in the area has been giving us very frequent squalls. The “open the hatches – close the hatches” drill is getting a little old. 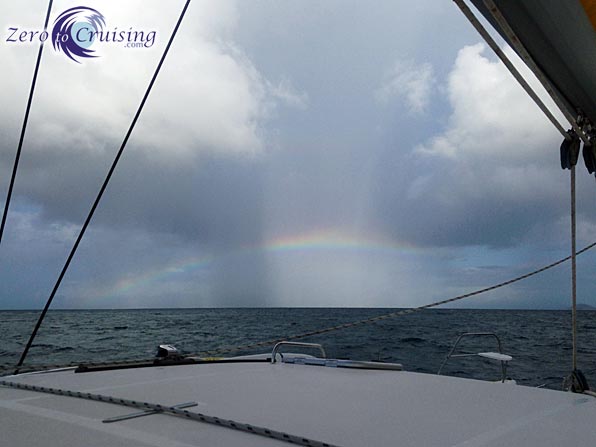 A tip for those of you with a new-to-you chartplotter… do not test out the MOB (Man Over Board) button unless you know how to deactivate it. On our Raymarine C95 chartplotter pushing the MOB button not only sets a waypoint but it also switches the charts to a low-detail setting and triggers a very annoying alarm every which goes off every 30 seconds or so until you cancel it. I found all this out just as I was approaching an anchorage, a time when a detailed chart might have been handy!

For the record, to cancel the MOB on the Raymarine you need only hold down the same WPT/MOB button for 4 seconds. This I found out after we anchored and I had time to consult the manual. Also, if anyone was to take me captive and want to torture me for info, all they would need to do is turn that alarm on and let it run uninterrupted. I’d spill all my secrets in a heartbeat!

Not all fun and games