Where and when did you start?

We began our trip from our daughter’s house in Corona, California on June 1, 2017.

Our ultimate goal is to ride to the end of the world, Ushuaia, Argentina. As for the exact route we will take to get there, we have no idea beyond the fact that we expect to travel down the Pacific side of South America, transiting through the rest of Central America, Colombia, Ecuador, Bolivia, Peru, Chile, and Argentina.

How long will it take you to get there?

As we do not want to be cycling in Patagonia during the austral winter, our goal is that we will arrive in Ushuaia somewhere between January and March 2019.

How far have you gone so far?

How far do you ride each day?

This varies a lot according to the terrain that we’re traveling on. We have managed to cover more than 100 km in a single day on several occasions but that typically only occurs when we find ourselves riding on pavement without any crazy hills. On rough dirt tracks we sometimes only manage to cover half that amount. These days, on average, we ride about 60-70 km.

We both rode bikes since we were young kids but neither of us had ever cycled on anything more than a long day ride before beginning this trip.

Where do you sleep? Do you wild camp much (usually asked by other cyclists)?

Occasionally we have the opportunity to stay with a Warmshowers or Couchsurfing host. Those are generally the only times when we really know in advance where we will be sleeping. At all other times, we figure it out at the end of the day’s ride. We either look for a cheap hotel/motel/hostel, find ourselves invited to stay with a friendly local, or set up our tent somewhere.

I’d like to say that we camp a lot but since leaving Baja, we have found it much more difficult to find a suitable spot. I expect that will change again once we make it to South America, or at least I hope it does. We enjoy wild camping and it’s definitely the most budget-friendly option. Although we have not yet done this ourselves, staying with Bomberos (fire departments) or churches are two options that other cyclists routinely use.

How much does it cost?

When we were asked this question about our time cruising on a boat, I answered it in a rather unpopular way. You can read what I wrote here. I am now even more convinced that what I wrote in that post is true. Our budget is in no way reflective of what other cyclists spend while touring. In fact, I bet we spend more money on beer and wine than others do on their entire food and accommodations budget!

How many flat tires have you had?

Given that our tires are set up tubeless, we typically don’t get flat tires in the fashion that most are accustomed to. Our tires have sealant in them which tends to take care of any normal day-to-day punctures that may occur. There are occasionally times when we do have to intervene by placing a plug in a larger-than-normal hole but that is generally a very quick process. We can usually insert a plug, pump the tire up a bit, and be back riding in less than 10 minutes. There was this one time though…

Have you had any major bike problems?

Knock on wood, no. Our Tumbleweed Prospectors have been rock solid. We do try to take good care of them and have had them serviced at regular intervals along the way.

Have you had any trouble along the way (bandits, etc.)?

No. We have been met with nothing but kindness. The vast majority of people are good. Don’t believe the media!

Does your butt get sore?

After riding more than 40 miles on a given day, yes.

Are you happy with your bikes?

Couldn’t be happier. I have yet to see a bike that I would rather have than the ones that we are currently riding.

How will you cross the Darien Gap in between Panama to Colombia?

Great question. That is still a work in progress. We’ll know more as we get closer to that area.

What are you going to do when you get to Ushuaia?

Another good question and we have no idea. We’ll figure that out when we get there. 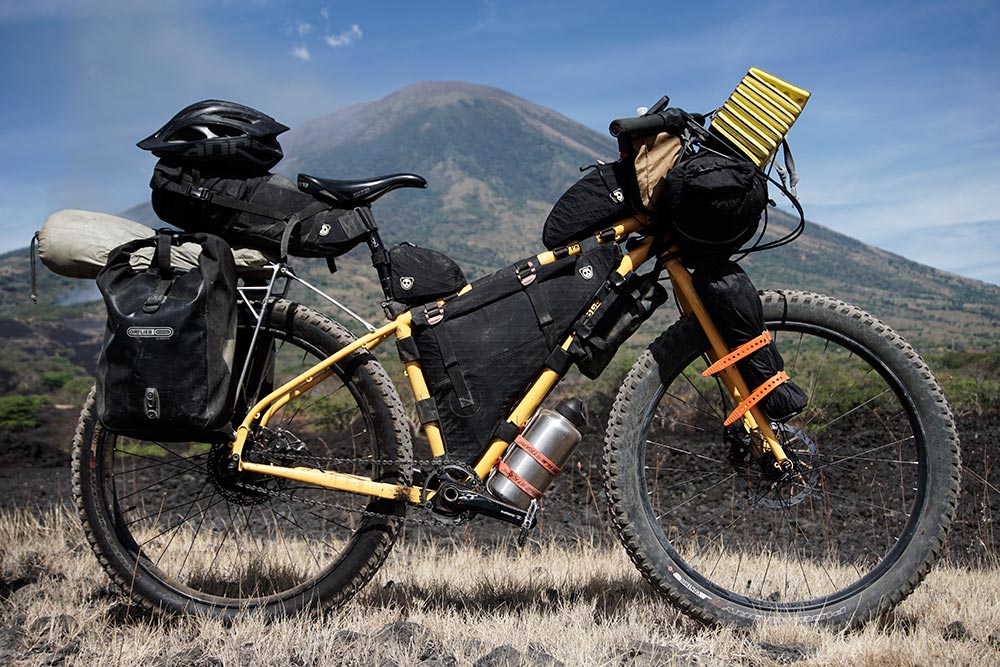 For Mike, how is your knee? And for both, how has the stress been on your bodies? (Sal C.)

The knee issues I experienced at the beginning of the tour appear to have been caused by having my seat at the incorrect height. I say that because once it was raised, all troubles with my knee disappeared. In general, I feel we are both in great shape. As regular readers know, Rebecca has always been a workout animal and believe it or not, she still continues to do an additional small exercise session first thing each morning. I am not so inclined but the days of tough cycling obviously agree with me.

I’m blown away by the number of times you walk the bikes uphill. The mountain bikes I’ve ridden in the past were geared so low that you could just about pedal over a good size log or rock. Granted, you really have to spin your legs but a slow steady forward motion would get me up the steepest terrain. Is it the weight of the bikes or the fat tires that makes it easier to walk, and have you experienced really tough, steep terrain without all your gear on? (Ken P.)

It’s definitely the load on the bikes that make it more challenging. Even though we’re traveling incredibly light (for long distance tourers), there is still enough weight on the bike that riding up a steep hill is tough. Additionally, what one may be able to do, or choose to do, on a 30-minute ride is not the same as what one can do after cycling hard for 5 hours. This is not to say that some cyclists couldn’t ride sections that we choose to walk because I know that they could. You have to learn to pick your battles though and sometimes pushing the bikes, as tough as it may be, is as good as a rest as it uses different muscles.

We ride platform (flat) pedals. Why? Because it’s all we’ve ever used and neither of us was interested in trying to learn how to do otherwise. That said, I actually think it’s best for the type of riding that we’re doing. We are also able to get away with only carrying one set of shoes with us.

How many calories do you estimate you are burning on an easy, average, or difficult day? And how do you replenish those calories? How often are you having to eat? (Brandon W.)

I have no idea how many calories we burn and as you noted, because the difficulty and length of our ride vary each day, I expect our food requirements do too. The ideal answer would be that we eat when we’re hungry but sometimes we aren’t carrying enough food (or more likely anything that appeals to us to eat at that time), or we don’t want to stop on the side of the trail to prepare anything. So, given that, we ride on in search of a place to purchase something. We definitely do stock up on calories when we make it to a town though!

How do you plan your routes? (Cheryl L.)

We tend to plan our routes a week or so at a time using the method described here. Our routes are always open to change though and we adapt them daily based on how we feel, the terrain we encounter, and new information that becomes available to us.

What is the weight of the bikes unloaded, and loaded? Also, how much fluid do you carry between destinations? Also, do you carry any water purification tech? (Greg C.)

That really is a common question but I don’t know for sure. I sent Daniel from Tumbleweed an email to ask him and he estimated that our bikes (with racks) weigh approximately 35 lbs. unloaded.

As for water, we have carried as much as 13.5 liters each when we were on desolate stretches in Baja but now sometimes only carry as little as 700 ml each in our main bottle. Typically, if we know that we’ll be riding on dirt roads and that it’s going to be hot, we will fill the 700 ml main bottle that we keep in our cockpit and the 1.9-liter bottle that we carry on our downtube. As for water purification, we carry both a USB-rechargeable Steripen and an MSR TrailShot.

If you were to order a new bike tomorrow, what if anything would you change about your bike? (Steve C.)

Have it made out of titanium so that it would be lighter? Honestly, there is nothing I would change. We love our bikes. If I had the money I would add a Thudbuster seatpost to ease some of the bumps on the rough roads and a dyno-powered lighting setup for the few times that we’ve been caught out after dark.

What do you do about dogs that might chase you? (Chrystal Y.)

It’s funny how some dogs really like to chase bikes while others couldn’t care less. If we see a dog before it sees us, we first try to guess whether it is going to be a problem or not. Usually, we can tell. The last thing we want is to be startled by a dog and then swerve into an oncoming car so given enough time, we’ll generally look in our mirror to check the traffic status before we reach it. If a dog does start chasing us we know that if we stop, get off our bike, and stand with it in between us and the dog, that will almost always completely end the encounter. If we’re not riding, there is nothing for the dog to chase. This happens so often though that we usually don’t want to stop and get off our bikes. I find that loudly yelling back at the dog will often make it back off. We have also been known to squirt water at dogs from our water bottle and on at least a couple of occasions, kick at them as we continue to ride away.

Have any other questions about our cycling trip? If so, post them here in the comments and I’ll do my best to answer them.

So long, Mexico. It’s been quite the journey!

The most challenging could also be the most epic