Testing our new tires on the way to El Astillero

While unquestionably a beautiful city, our stay in Granada ended up being a bit longer than we had hoped. The tire delivery that we had organized from Costa Rica took an additional two days simply due to the lazy and incompetent driver who held on to our package instead of bringing it to us as he was paid to. He even lied to the bike shop that shipped the tires, saying that he dropped off the package on Monday when we didn’t receive it until mid-afternoon on Wednesday. The truth is that the only reason we received it when we did is because we called him on the phone over and over. Pura Vida Ride in Costa Rica: Thank you for your help. Pablo the driver: You suck! 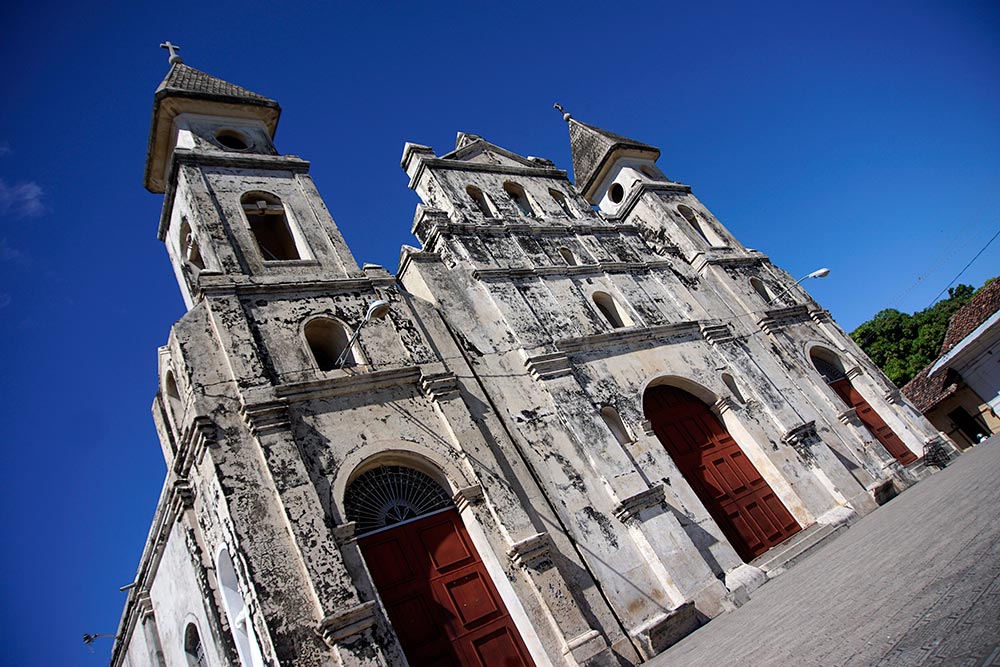 While not at all religious, I do love the architecture of churches. 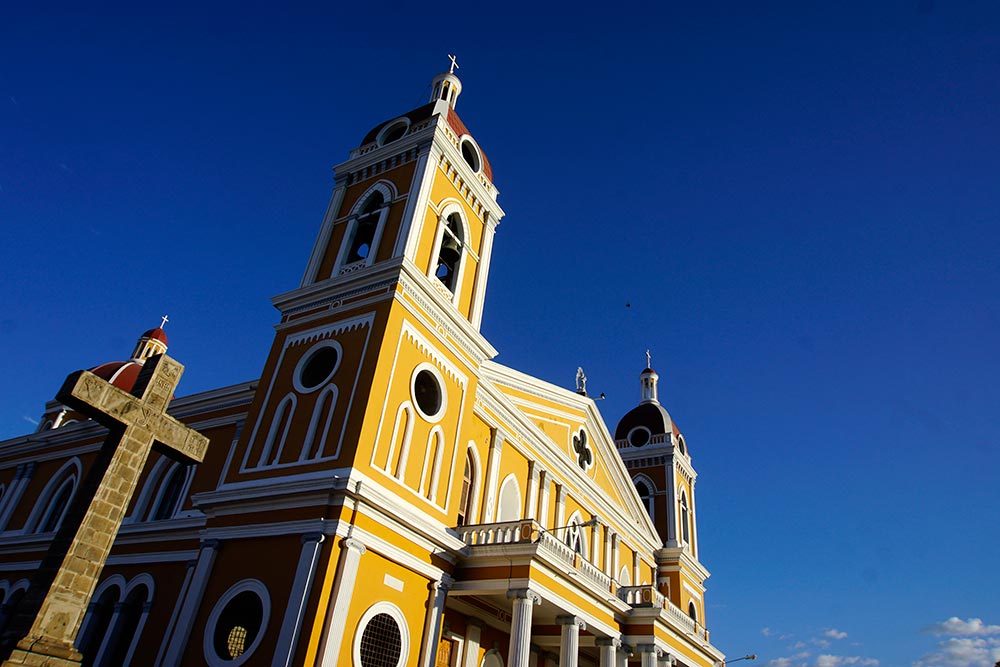 While waiting for the tires to arrive, we did splurge on one touristy activity. We took an excursion to the top of Volcan Masaya one evening to check out the lava. Because there are so many people wishing to visit the volcano each night, the entire event is a bit rushed. It is pretty cool though as the photo below indicates. 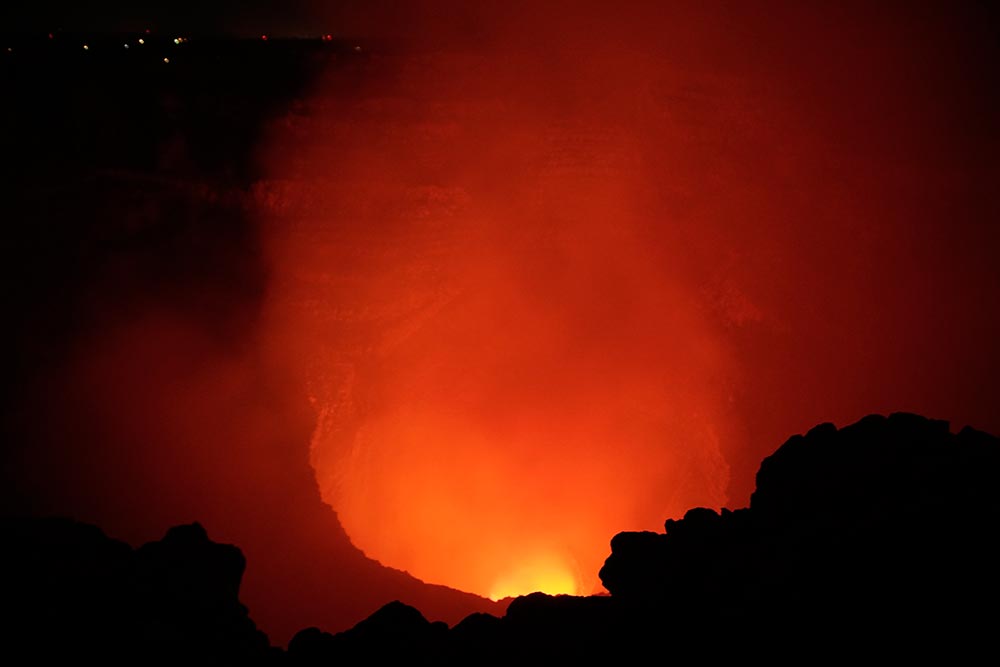 Setting up new tires tubeless often requires more than a micropump like we carry so when we ultimately did receive our delivery, we took our bikes and the tires to a local shop to get some help. As it turned out though, the pump that they had was little better than the one that we had. Additionally, I don’t know if they had ever seen a tubeless tire before. Ultimately, we ended up taking the bikes to a nearby gas station to use their air compressor. I am happy to report that with the compressor, we were able to set the bead on the new tires quite easily.

With our new rear tires installed we are ready to roll.

Compounding the tire drama was the fact that I picked up a cold while in Granada. Probably the worst cold that I have had in years, as a matter of fact. Sleeping in a dorm room with someone who is coughing and sneezing can’t be all that pleasant but unfortunately, I was “that guy.” Speaking of the Lemontree Hostel, we learned that it had only just opened the day before we arrived there. Given how busy it seemed to become in just the short time that we were staying there, I’d bet that it’s going to be successful. For the record, I’d highly recommend it as a place to stay in Granada. I’d also like to give a special shout out to Eric, the front desk guy. He speaks excellent English and was a big help to us in chasing down Pablo and also helping us to sort out some troubles we were having with our phone account. 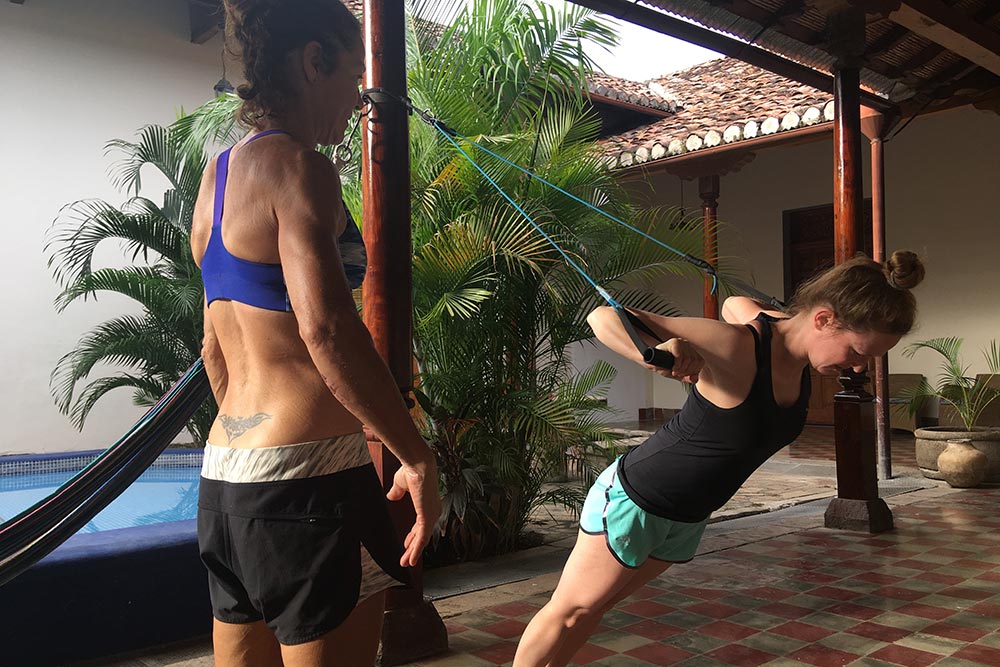 Rebecca giving an impromptu Aerosling lesson to another hostel guest

On the morning of our intended departure, I will admit that I had thoughts of staying in Granada another day. I was still incredibly stuffed up and the last thing I felt like doing upon waking was riding 60+ km to the coast. I kept that to myself though and about 8:30 AM, after saying our goodbyes, Rebecca and I pedaled off out of the city.

If we had been looking for a good test for our new tires, that day’s ride was it. Our plan was to travel to El Astillero, a small fishing village on the Pacific coast that was recommended to us by our friend, Dave. The ride began with a slow 20 km climb on a paved road. After that, it got interesting. The next 45 km was comprised of gravel, sand, dirt, rocks, and no less than 30 or so water crossings. Like I said, a good test and the tires performed as we had hoped. 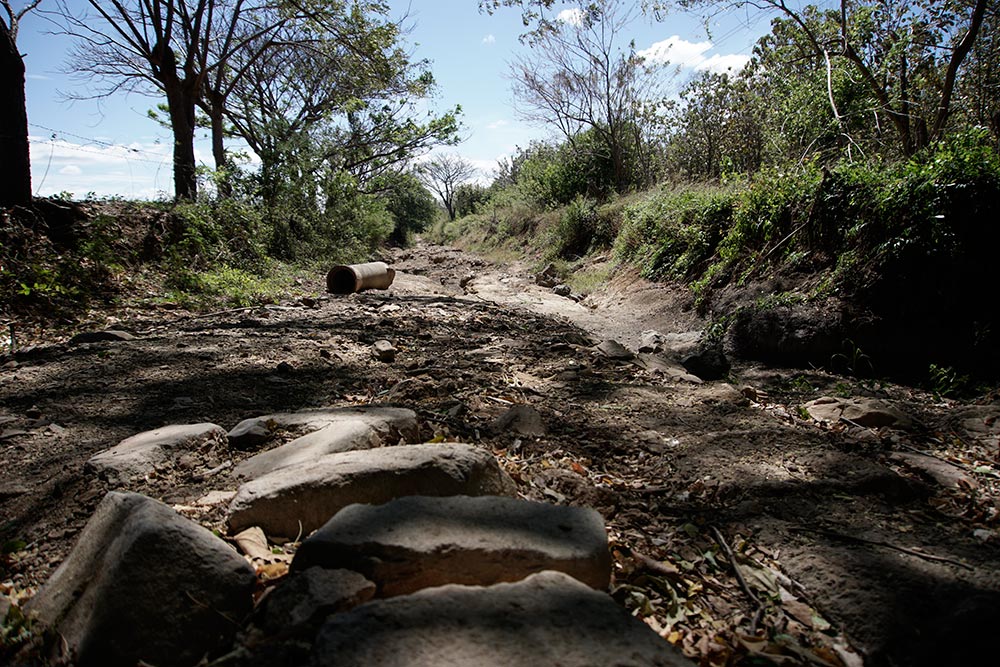 Our nicely paved road suddenly degenerated into this! 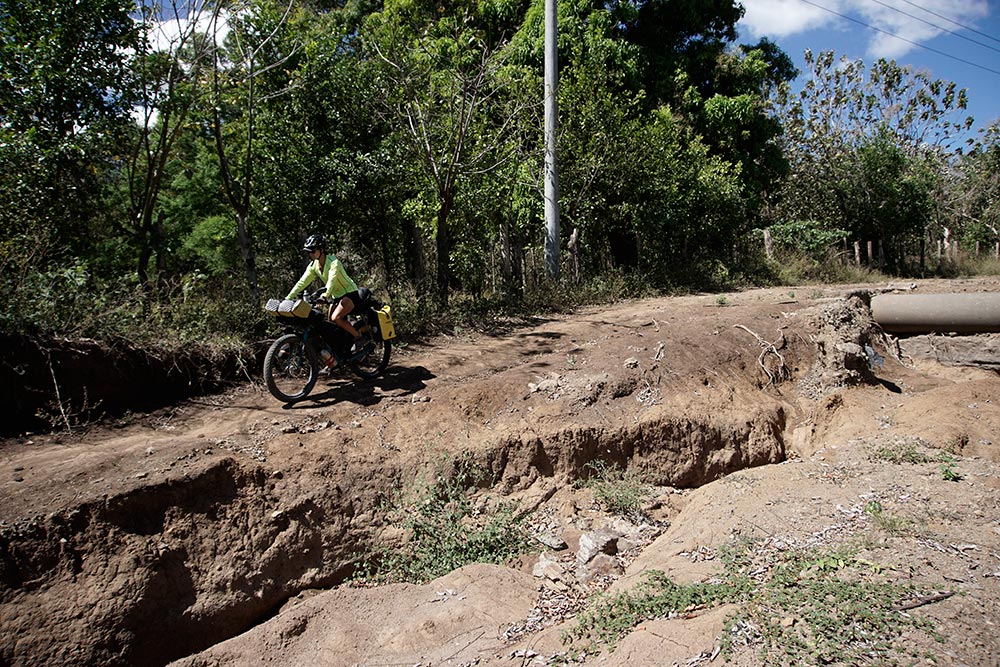 At one point during the ride, we passed by a few motorcycles and a dozen or so men on horseback. We played leapfrog with them for a while, wondering what the deal was. Was it quitting time and everyone was heading home from work? Shortly thereafter we found out… they were all heading to a funeral. While not the first time we had come across a funeral procession, it was the first time we actually got stuck behind one on a dirt road, and definitely the first time we saw a procession with 30 or so people on horseback. Given that the pallbearers at the front of the procession were carrying the casket, I was pretty sure that we wouldn’t be going too far so, unsure of exactly what else to do, we tried to be respectful and slowly followed along until the people filed off into the cemetery for the service. 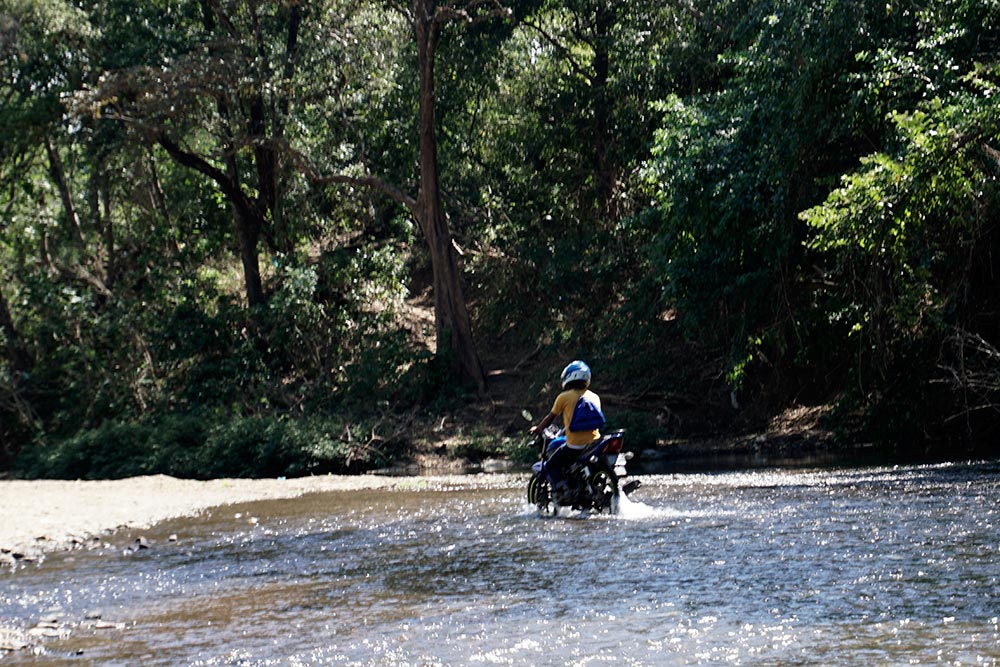 Small motorbikes like this one are a primary means of transportation in Central America. 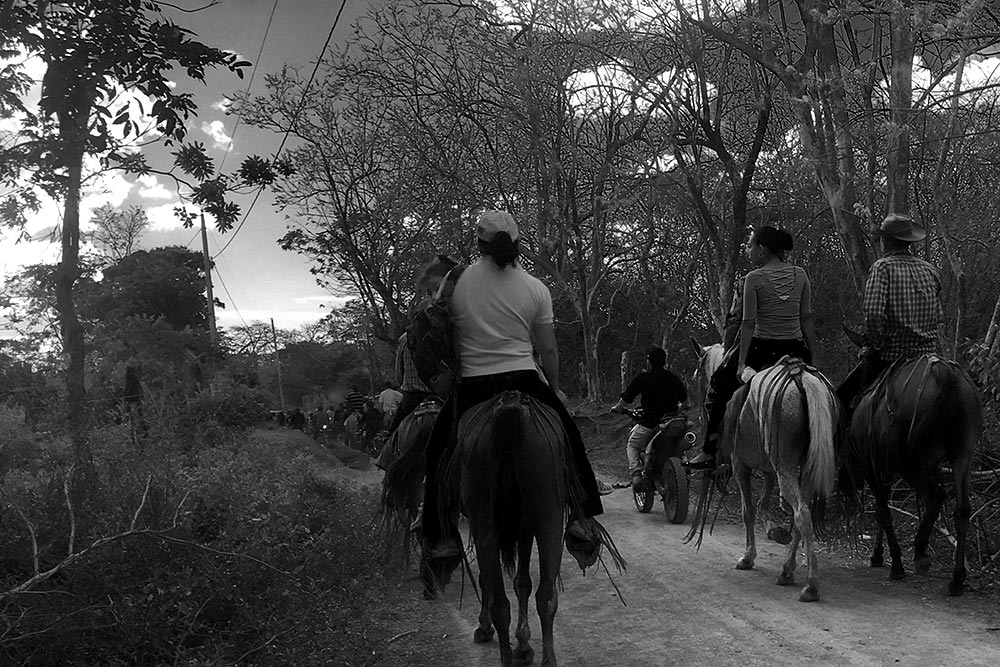 Following along with the funeral procession. RIP.

I think it’s funny how we can sometimes piece together directions from only 1 or two words that we can understand. On two occasions during that ride, we asked for clarification when our Google-planned route left us puzzled. From the first directions, I got only two words: cross and left. We determined that meant to take a left at the crossroads and ultimately, that turned out to be correct. The second time we asked for directions we got the words river and better. The gist of that was that instead of taking the route that we had been planning to, we should just follow the river. As following the river meant avoiding the big climb that was in our path, we were all about taking that advice! 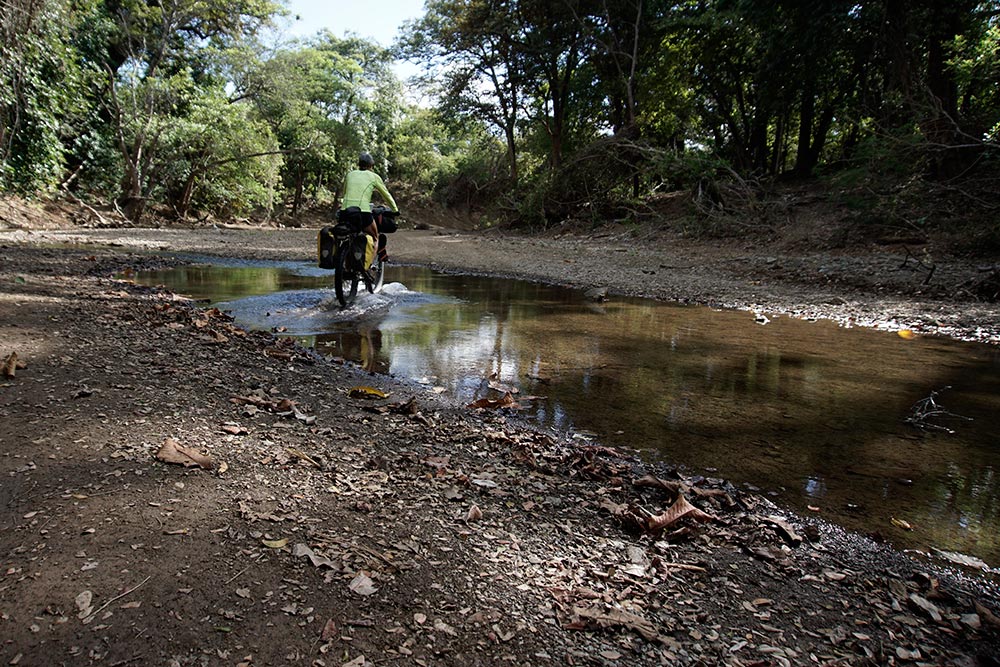 We got our feet wet a number of times that day. 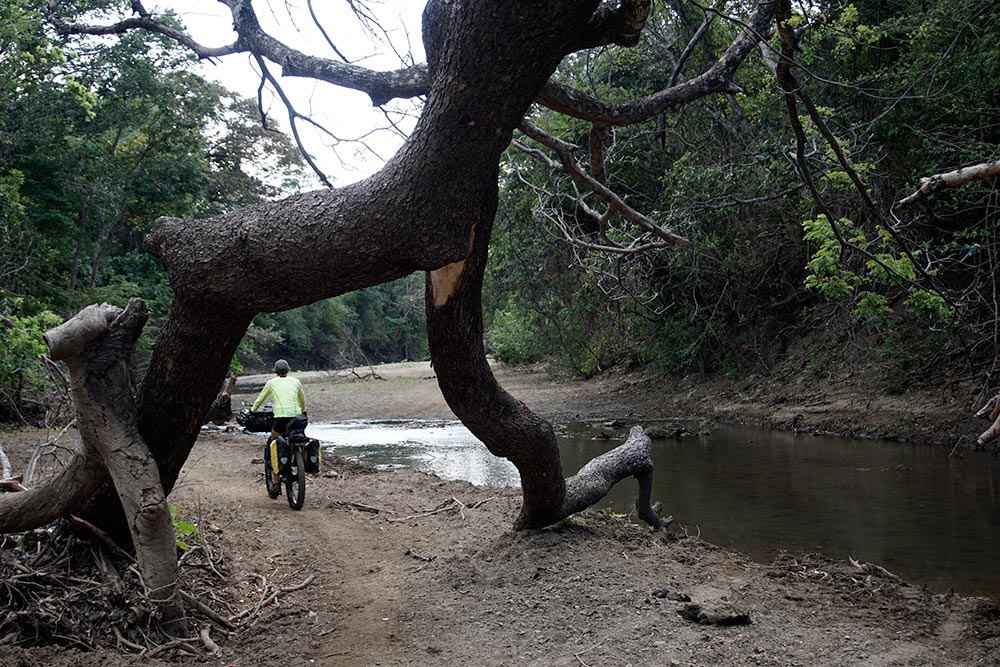 Interestingly, the riverbed that we started following is obviously used as the main road for the people in that area. While we saw only 1 van on the track, stopped at a particular water crossing, scoping out the water’s depth, we saw many horsemen and motorcycles traveling the route. I wonder what they do during the rainy season. I suspect they must have to take another path because even now, during the height of the dry season, we still got our feet wet on multiple occasions crossing the stream. 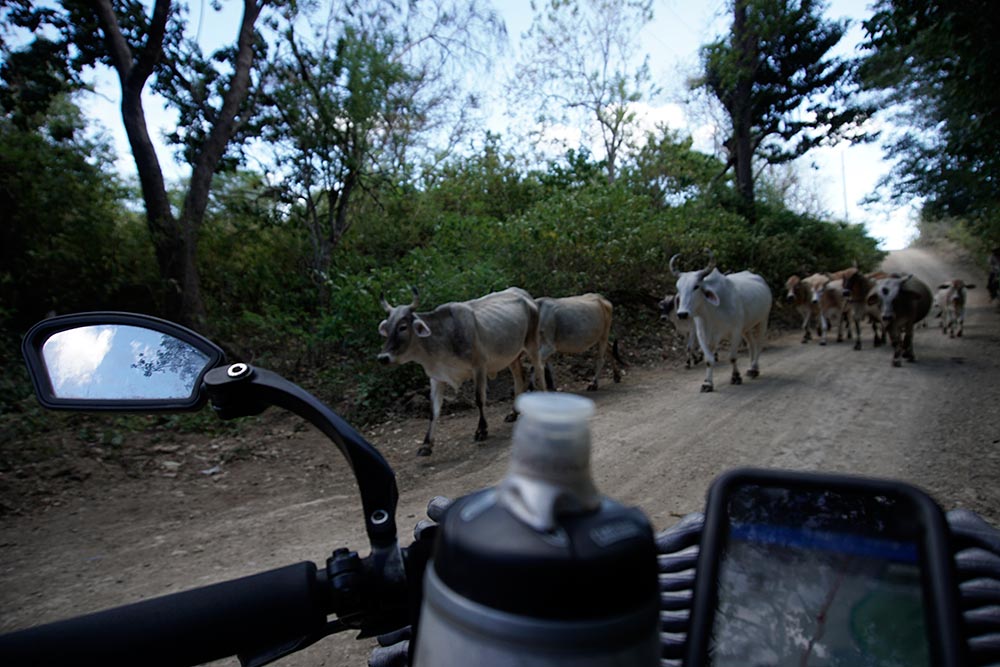 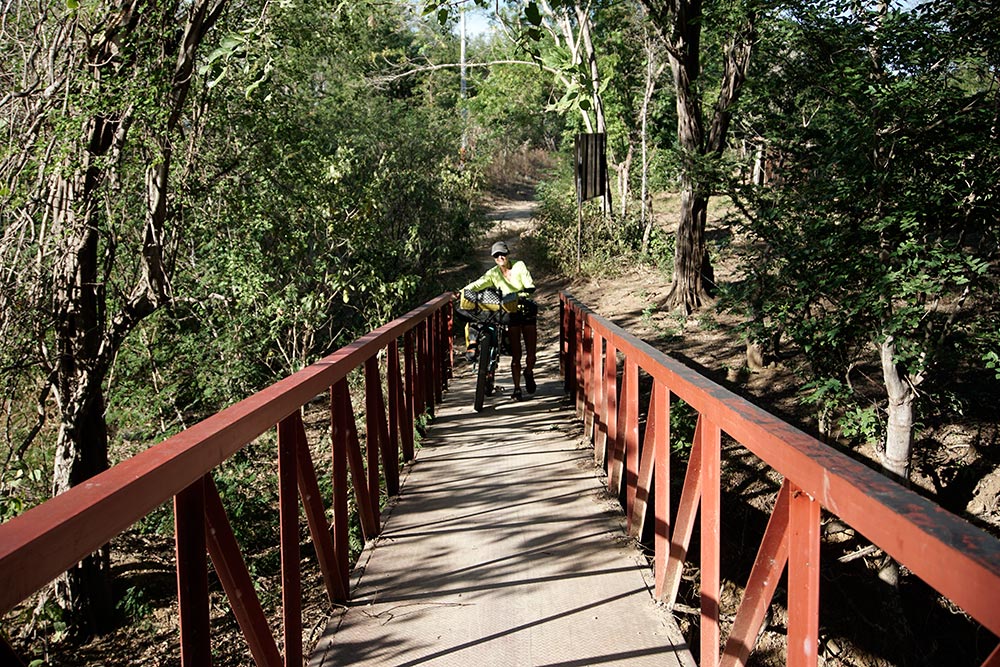 A real bridge? That was unexpected.

It was late afternoon when we rode into El Astillero, both tired and thirsty from the day’s hot and challenging ride. We made our way to the beach where fishing pangas lined the shore and waves were breaking onto the beach. Unsure exactly where to go, we asked a man if he knew of a place to stay. He suggested that we go down the beach to a spot where there was a hotel. When he left, I realized that I didn’t ask for a “cheap” place to stay. We then approached a group of women and asked the same question, only this time, being a bit more specific about our needs. Amusingly to us, although I’m sure it wasn’t for her, the women directed the teenaged girl with them to lead us to a small hospedaje back on the main road. 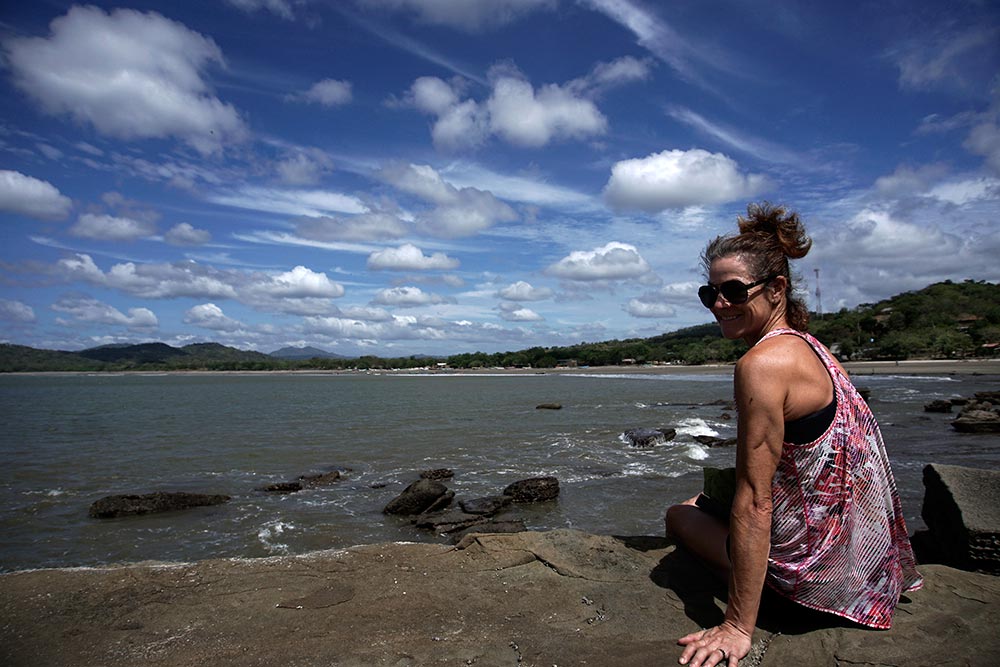 Playing on the rocks. 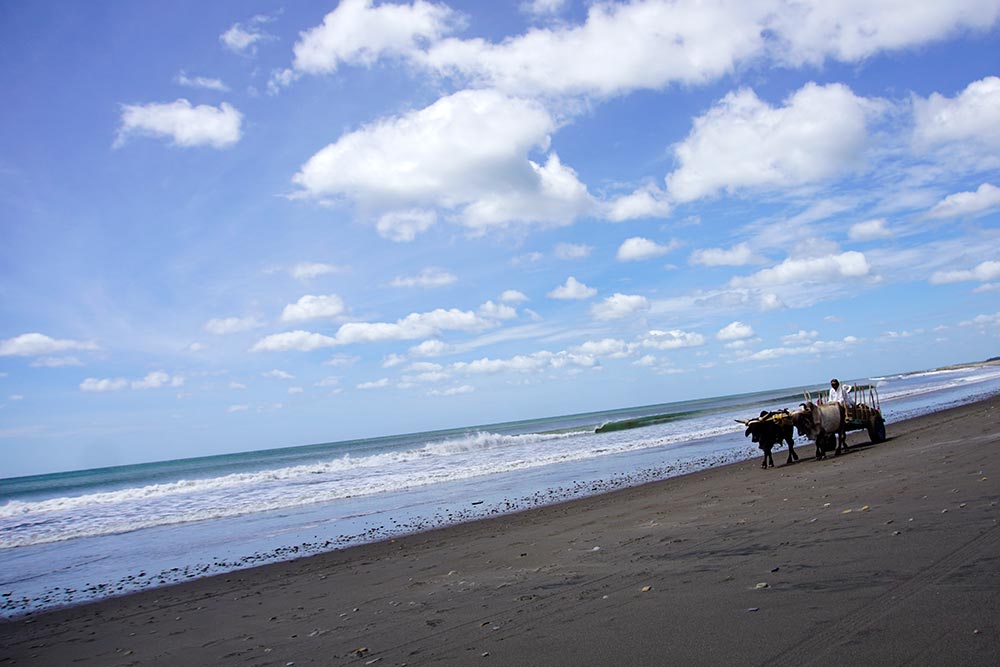 Coquito’s hospedaje, while basic, was a perfect spot for us to decompress from our time in Granada, and unlike the larger city, the town of El Astillero was anything but touristy. We took the opportunity to walk on the beach, exploring the rocky coastline, and also spent some time simply relaxing on the patio outside our room, listening to the powerful waves crashing onto the shore. Was it worth the significant effort to ride to the fishing village, following the crazy route that we did? Unquestionably. This is a perfect example of how the journey to get somewhere is more important than the destination itself. Cliché, yes, but only because it’s true. 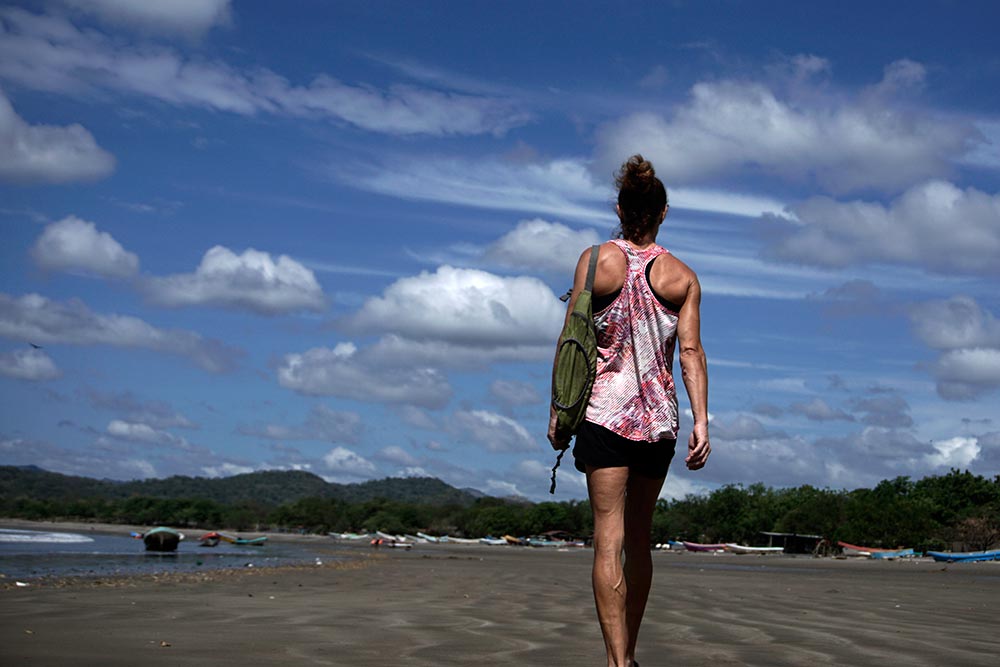 Stretching our legs after a challenging ride. 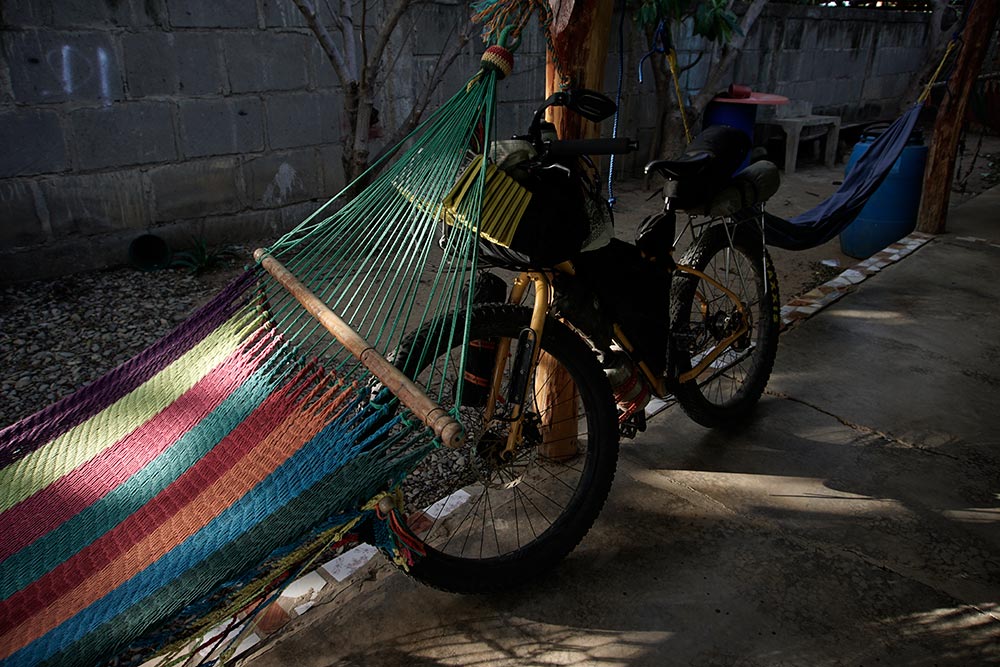 The mountains have been calling to us

A metric century and a side trip to San Juanico